View of the spire through the Cloister windows. I love this photo. 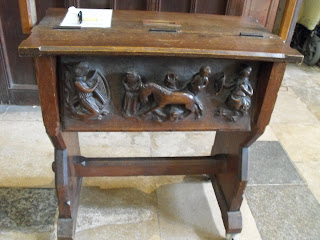 I took this photograph for the detailed carving, and the lovely pony in the middle. If you click n it and look more closely, you will see that the lady behind the pony has been decapitated as some point (not sure if deliberate or accidental), and just what is happening to the bottom half of the knight type figure far right - his legs look like he is a genie from a bottle!

This effigy dates from the 12th century and was situated at the original chosen site of th cathedral at Old Sarum, but was brought here subsequently. It is thought to be Jocelin de Bohun, who was Bishop from 1142 - 1184. The details of Humphrey de Bohun make interesting reading. 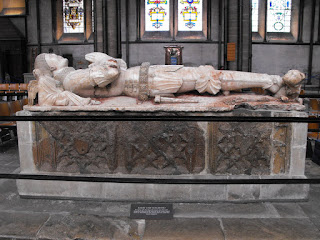 The plaque beneath reads: Robert Lord Hungerford: He died in 1459. His effigy and remains were first in the Hungerford Chantry which was demolished in 1789 and this tomb was rebuilt from the fragments.

If the name rings a bell, go back to my old Codlins and Cream blogspot and check out Farleigh Hungerford Castle, which we stopped at on the way down to the New Forest at the beginning of August.

Soaring arches and columbs above the misericords. 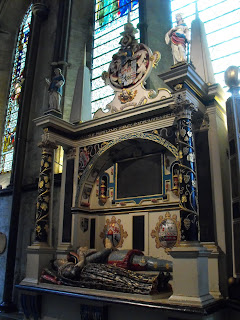 The Mompesson tomb. Across the top is written Richard Mompesson, Knight and Dame Katherine. He died in 1627, and lived in the close (stunning Mompesson House was pictured on my Salisbury Cathedral I blog entry). Apparently this memorial is unusual in that it faces West instead of East, as initially it was the other side of the aisle. It was repainted in its original glorious colours in 1962. 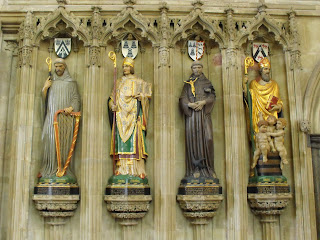 I assume these are earlier Bishops of Salisbury.

I think this tomb is the one built in memory of Sit Edward Seymour, Earl of Hertford and his wife Katherine, who was sister to the ill-fated Lady Jane Grey. It was certainly a very decadent memorial. 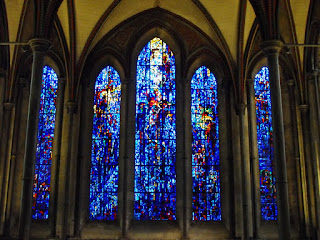 I think these beautiful stained glass windows are those in Trinity Chapel.

My husband made me take all sorts of photographs of church "furniture", and I suspect he may be making his own replicas as some time in the future . . . 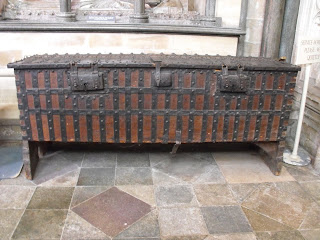