Down by the river 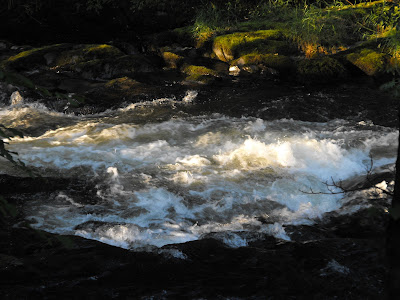 I have spent a while looking at our river today.  At lunchtime I went for a walk to stretch my legs - and hopefully keep at bay the Sciatica which has been coming and going the past 3 weeks or so.  I leaned on the parapet of the bridge for a while and just watch the water glissading underneath it, and then as I walked across and up the lane, I caught sight of a Dipper on a rock, preening himself.  He seemed totally unaware of me - and there were a few trees between us - and so I was able to watch him for 5 minutes or so.

I only walked a mile or so up the valley but was lucky enough to have the sun come out and light up the maroon and bottle green of the ivy leaves, throw a golden glow on the hedge bottoms where the Dog's Mercury shelters, and show  tree-tops the colour of mercury against the darker clouds.

I was hoping to hear a Chiff-Chaff, but none have arrived here yet.  I heard and saw some Blue Tits and Great Tits, and a Robin followed me a few yards from curiosity.  Blackbirds turned over dead leaves and three small orange snail shells lay broken on the road's edge, where a Thrush had his workshop.

The Dipper was still on a rock when I got back, and he then flew up onto a branch which the river had captured and jammed against the central stanchion.  What a handsome bird, but no dipping or curtsying did he do today. 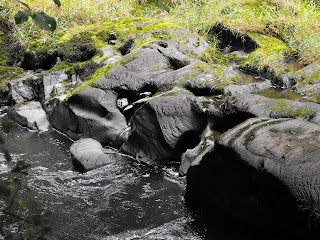 An hour ago my husband suggested that we go and bring back the excellent Ash log which the river had recently brought down.  It needed the chainsaw at it, and made 4 logs to heave back to the car.  I managed to carry one a short distance, but my back began to complain and I had to leave it for the strong one in our partnership.  As we worked, I noticed that there were huge fingers of ice on the slate rockface beside us, where we have had torrents of rain and then a return to colder temperatures.  It made me feel cold just to look at them!

I couldn't resist picking a bunch of pussy willow twigs which had been cut recently when the fishing guys were sorting out the river-edge, and these had now decided to flower anyway and the dove-grey and silver buds are now gracing the hall table in a simple earthenware jug. 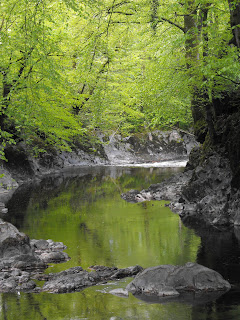 This GREEN is what I would LIKE to see down by the river, but I don't think it's going to happen any time soon, as when we came back to the car it was attempting to snow, and little flurries of flakes were thrown into our faces.  According to my husband, the weather pundits reckon this cold spell could go on into April, and then be followed by another dismal wet summer.  I do hope not. . . it will wipe out certain Butterflies which are already critical (98% decrease in numbers of Black Hairstreaks for instance) and soon all we will see will be Cabbage Whites .  .  .  Bees are already suffering terribly and I think another summer could really decimate their numbers.  We will have to wish for a decent summer for 2013 . . .
Posted by Bovey Belle at 09:51