Craft Work in progress and soon to be 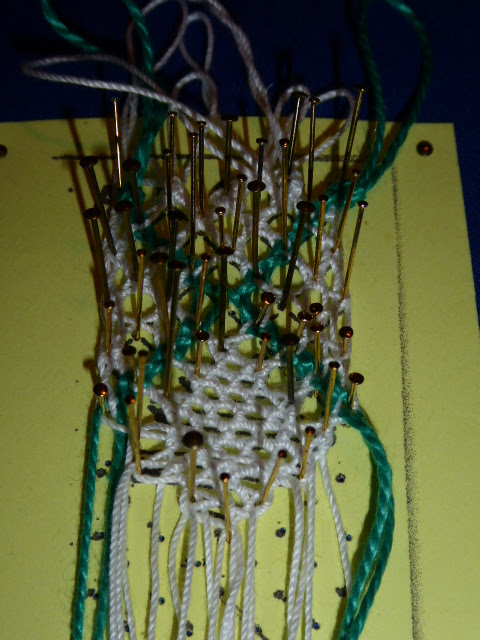 Yesterday morning I set off to my friend Dawn's for another lace-making lesson.  I was finishing off the bottom of my first piece of Torchon lace, and starting on lesson No. 2.  She also loaned me a staple gun to fasten the material she had kindly given me to the lace making pillow her mother-in-law had kindly given me.

Lesson No. 2 is much harder as I have to learn to read from a pattern and how to split the work at the sides to just work the central diamond (isn't it lovely?).  The white thin perle thread I already had and the green perle was the darker of the two spools I bought at the Quilt Festival last Friday. 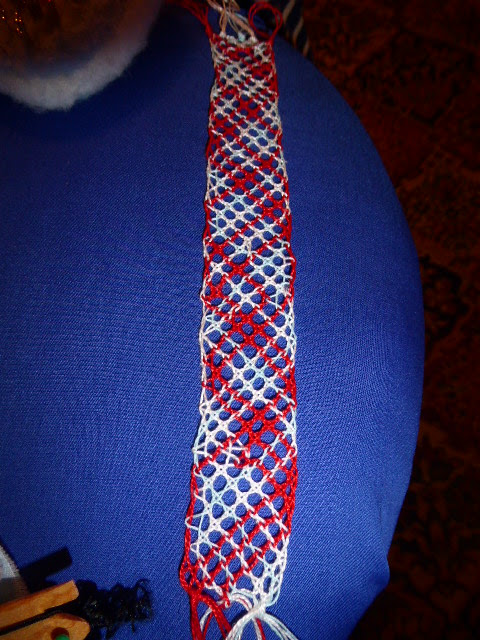 My first-ever attempt at lace-making, FULL of mistakes, but never mind, I learned a lot, especially where I had gone wrong. 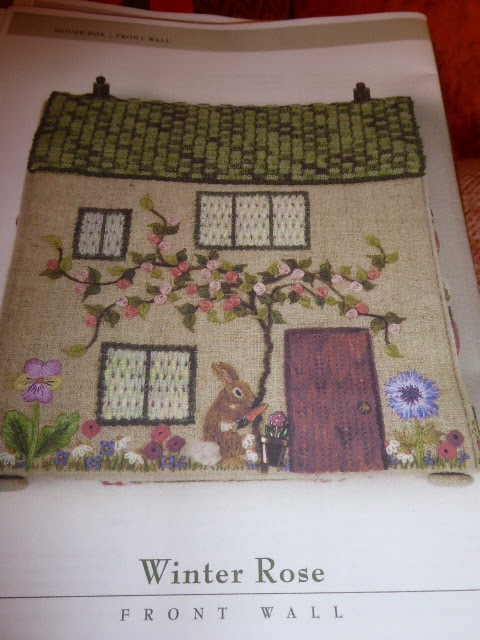 This is wall one of a long-term project that Dawn has set up for a small group of  us to do.  It is a 3D cottage with sewing compartments inside.  I can't wait to get started but need to trace the pattern for this first, once I have cut out the various sides and roof panels from the linen we are using. 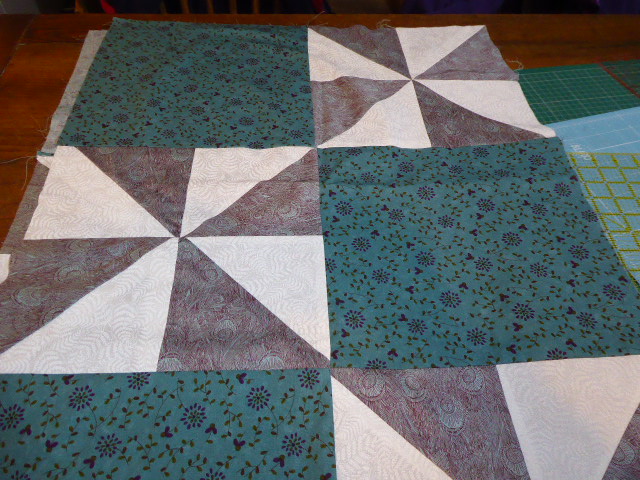 I am working on daughter Gabby's quilt again.  I bought some more material - the wine red in the design on the pinwheel patches DOES tie in with the red on the floral print blocks (which Gabby chose in preference to another material I had bought).  I've run out of the floral print now so need to get another couple of yards this week. 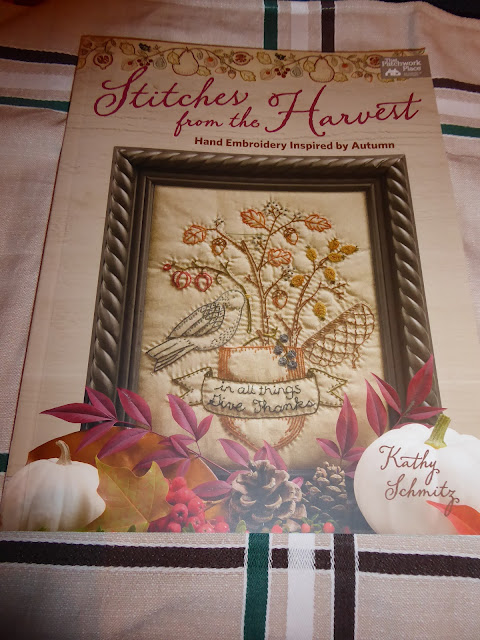 Now for my indulgences at the Quilt Fair on Friday.  I allowed myself one book, but it was so difficult to chose.  Even choosing between this book and it's sister title Stitches from the Garden was hard, but this is the one I plumped for, and I want to make just about everything in it! 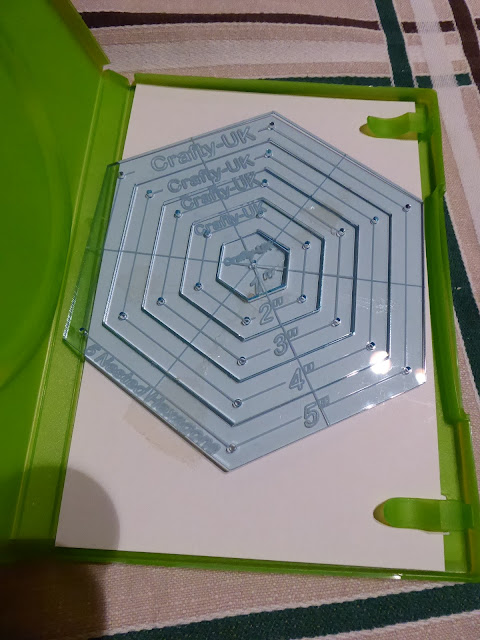 I tried to stick to my list of what I needed rather than what I would have liked, and I know this nesting set of hexagon templates will be useful as I do lots of little pieces or bigger quilts using hexagons. 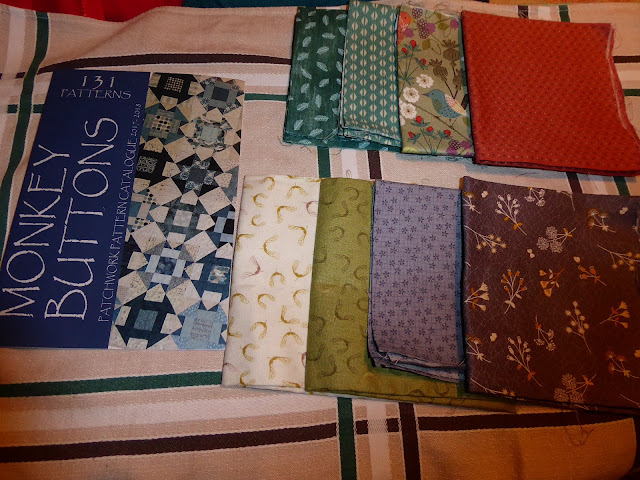 I bought some plain reddish fabric which I was hoping would match a project but doesn't, and forgot to take a photo.  This collection of 8 x 1/8th is beautiful and I am looking forward to using them. 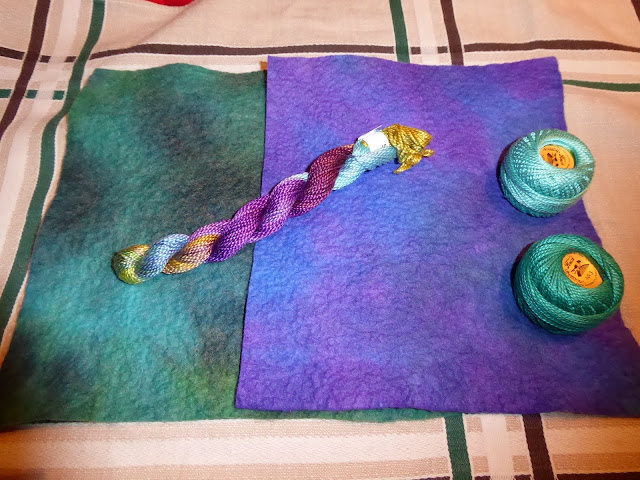 Overprinted felt, variegated perle cotton, and two small spools of perle cotton (the latter for lace making).  I was going to make the girls covers for their mobile phones, to protect the screens, but thought I ought to pass the idea past Tam and she said not to bother as they like to just grab their phone out to use and not have to take its jacket off first!!

Right, this won't do.  I didn't sleep well, and we have had a long day as we accompanied our friend to Wotton auction as she had some items to be entered for the next sale, and she had never done this before, and didn't know where the auction house was.  We had lunch in the town (The End, as usual) and drove back across country as the motorway Westbound had been shut for hours beforehand, due to a bad accident.  We didn't know when it would be opened again.  It rained all day, but hey ho, we're in autumn now.

Tomorrow I have my patchwork class, so hope to be able to show you some results from that soon.