This week I had a bit of a poorly chest - my peak flow went down and my breathing worsened.  I had made the mistake last week of opening a bag of compost (without a mask) and finding it mouldy.  I did exactly the same this week (there's no fool like an old fool) and must have inhaled some mould spores as it began to feel like I was getting a chest infection.  I spoke to the Dr who advised my taking the anti-biotics I had in-house for just this event (though haven't needed for a couple of years now).  Then she said, "You'll need to take a Covid Test and Isolate straight away."  Well, I wasn't expecting THAT!  I had a choice of 3 drive-through test centres - ones obviously short on customers - as I decided on the nearest, Rhayader, and could have a choice of every single appointment that day!  It was almost like an afternoon out, as lovely scenery on the way, but at the test place it was very difficult to hear what the chap was saying, as he obviously had a mask on and with them insisting that the windows be totally shut, I struggled to hear what he was saying.  Anyway, I soon got myself swabbed as per instructions, though it does make you gag to touch your tonsils.  Fortunately the results came through by email yesterday morning, first thing, and I tested negative, which is what I expected. All the same, it put the wind up me for a few hours! 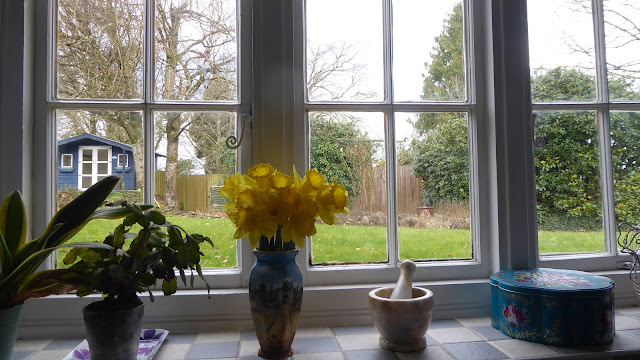 View of the kitchen windowsill, looking towards the bird feeders and below, my white dresser with its slightly changed display of my favourite china.  The gap on the top is due to me using the Doulton vase with the castle on it for the Daffodils (above). The cookery books are Tam's, so she didn't have to go searching for them when she was cooking. 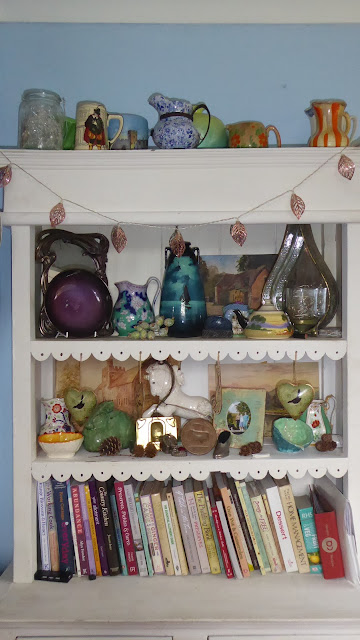 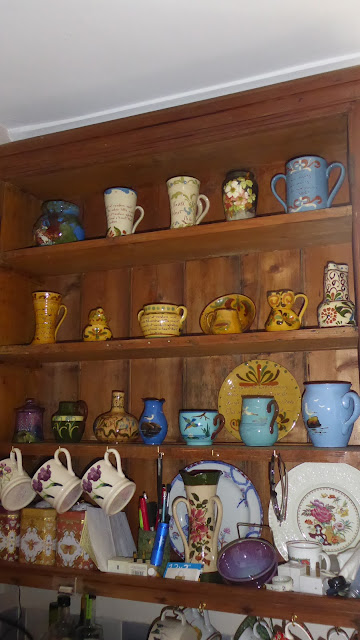 The top three shelves house some of my Torquay and Devon potteries collection.  The ones with the most words and the more ochre colouring are the oldest.  I hardened my heart over some pieces and they are in boxes in the attic, awaiting us doing a Fair again (if that ever happens). 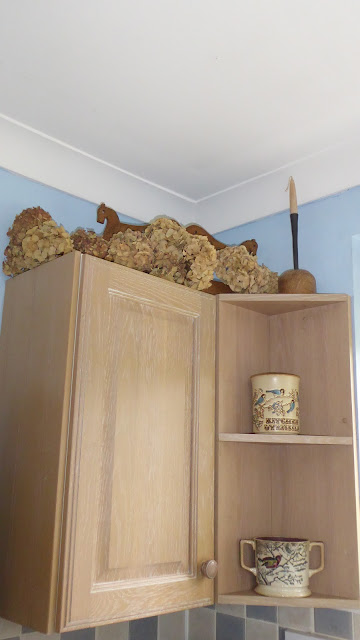 You can't see it very clearly, but behind the dried Hydrangeas is a European spoon rack with horses' heads either end.  The candle holder is one we bought in York for Keith a few years back - repurposed out of an old oak post.  The bluebirds piece is Tam's and the loving cup on the bottom one of mine. 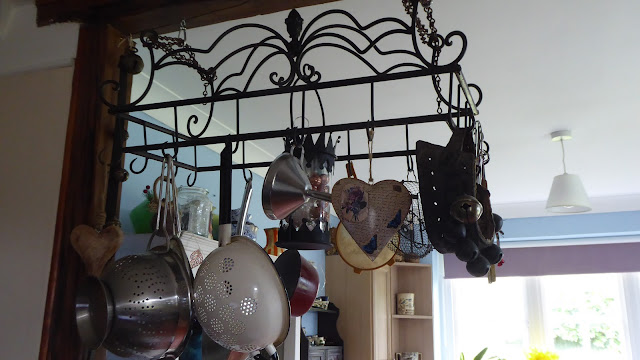 This has made itself very handy indeed.  On the right are the crotal bells on an old leather collar used on a French bellwether sheep (in the Pyranees probably).  It rings a lovely tone. 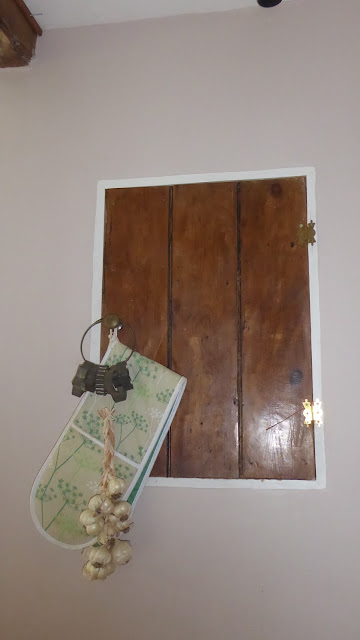 This cupboard is set in the chimney breast (no longer in use) and has a wee window at the back which lights the interior of my jams/chutneys and pickles/oils and vinegar cupboard.

I can't remember if I shared these photos with you before - but anyway, here they are today as I've not been out for a walk this week due to being off-colour.

Today I had a short potter in the garden and planted two of the baby Clematis from Morrisons in the side garden and my Bathsheba rose.  That had to be moved from its original intended spot because we came upon a pipe . . .  Yesterday we planted the small Patio rose Peachy on the far side of the pond, in the middle of another big area of demolished bits of house, and had to move that rose back too because we found a polythene pipe carrying the electricity cable to the Summerhouse . . . We will have to dig very carefully here.

I have gotten back to my family history whilst resting up and found my Great Aunt Nell - from a throwaway comment made by my mum many years ago now when we were discussing the family.  Aunt Nell moved to Oxford, she told me, and indeed she did . . .  Now I am trying to find my g.g.g. grandfather's birth details in Buckinghamshire.  He's a lot more elusive.