Birthday day out - visiting Hellens Manor, Much Marcle - part 1 (with all the photos!) 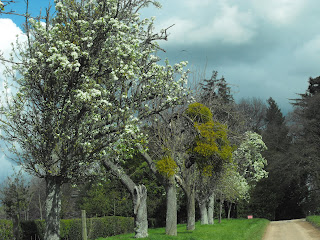 The approach to Hellens Manor, with beautiful Pear trees, some swathed in huge bunches of Mistletoe, which is common in the county. 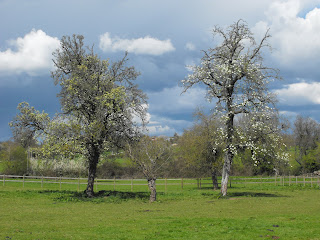 More pear trees in what had once, I assume, been an orchard - perhaps a Perry Pear orchard for Perry making - Perry is the equivalent of cider, only made with pears rather than apples. A really good perry (and I have tasted one at Ludlow Food Festival) is like champagne. Do not think that the fizzy bubblegum water currently masquerading as the cheaper varieties of "Pear Cider" (yeesh!) in supermarkets is even remotely related to Perry - or even Pears! 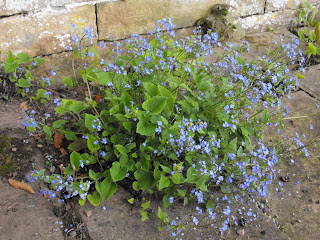 There were some lovely mounds of Forget-me-Knots growing in cracks in the paving stones. 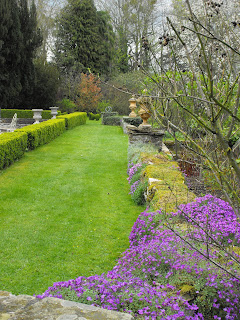 A grass walkway with Aubretia highlights, extends across the middle of the formal gardens. 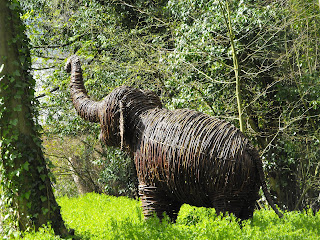 Out in the wooded margin to the main garden, we found this funny little willow elephant. Nearby were two small topiary elephants, just growing into their shape. 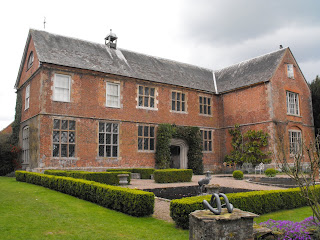 This is a lovely view of the house which shows its dimensions and its official approach. The grand doorway had once been, I believe, an entrance to the courtyard, and once farmcarts would have delivered fodder and supplies to what is now the inner courtyard. 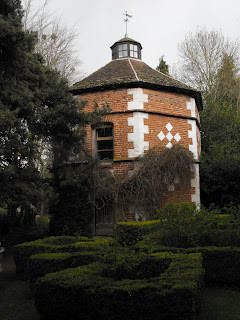 Above and below, now the dovecote, this building, with its extremely low doorway, was once used as a gaol where prisoners, having been found guilty at the Courtroom within the house, spent their last night before facing death by hanging to the East front of the house. Many a Welshman met his end thus - just to be found on the Manorial lands if you were from the wrong side of the Border, meant certain death. Hellens is situated on the Welsh Marches and the border has fluctuated either side of it in past centuries. According to the booklet we bought at the house, in 1282 Ely Walwyn (one of the family) was involved in the capture and killing of Llewelyn, the last Prince of Wales. 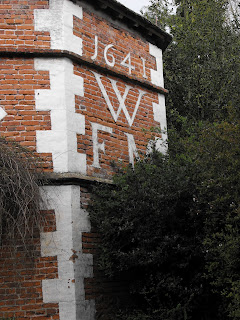 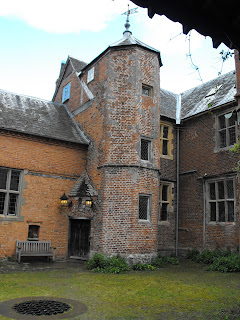 We began our guided tour in the inner courtyard. Very little of the original Norman building remains above ground. You can just see a couple of courses of sandstone at the bottom of the tower and adjacent walls. This I think is all that is left of the original house.

The land around the village of what is called Much Marcle today was, at the time when Earl Harold Godwinson was Lord of it (1057 onwards) was known as Merkelan. You may be more familiar with Hardolf Godwinson than you think, as he was Britain's King Harold, who died at the Battle of Hastings in 1066. William the Conqueror then generously gave Merkelan to his standard bearer, Walter de Lacey. In due course, the de Balun family (from France) were Lords of the Manor from 1096 and those courses of sandstone date from that period.

Hellens was name from Walter de Helyon, whose wooden effigy (below) lies in Much Marcle church, just a few hundred yards from the house. 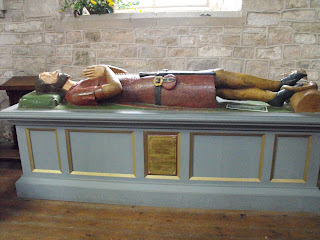 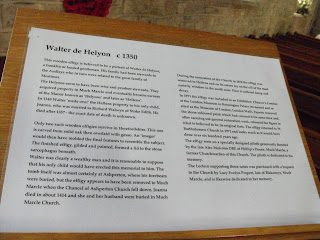 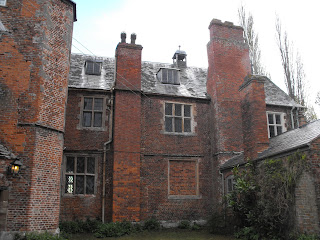 The inner courtyard showing a blocked up window and behind the chimney is a blocked up doorway - where the farm traffic once entered the yard. 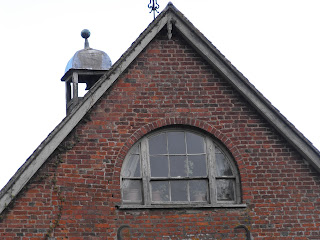 Up in the attics, this room is apparently occupied if the geraniums in the window are anything to go by. 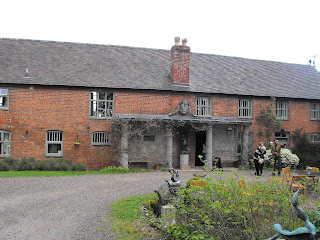 This is where visitors pay for their tour and I thought was a lovely building in itself. It had a wonderful atmosphere inside and an intriguing little staircase of just a few steps leading to a tiny door. I SO wanted to open it! The room has several paintings and some wonderful driving bridles which looked as if they had been associated with the horses that may have pulled the grand carriage in the photograph 3 down. 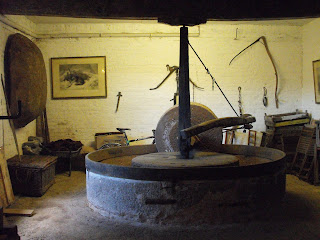 The interior of the cider barn, with implements still used each autumn, I am glad to say. The barn was fragrant with paper-wrapped apples in wooden boxes. 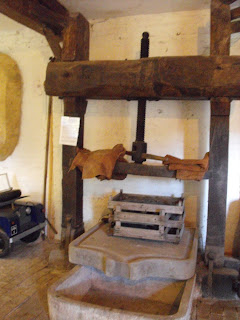 Cider making information below. Double click and all the photos should enlarge. 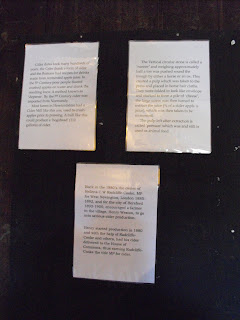 Part II with more of the history of the house and family, and a discussion about its ghosts . . . will appear shortly. 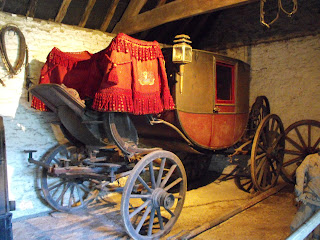