The other side of the river 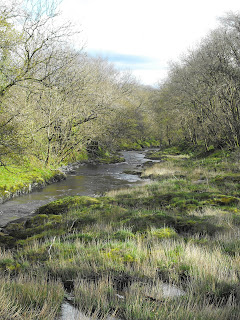 As this is my birthday week, I am lucky to have our eldest daughter staying until Friday, although our middle daughter was only able to make a flying visit because of work commitments. This was the start of the walk that T and I took yesterday. It made a refreshing change not to be walking on the lane, and to see the river from a totally different angle. The first stretch means clambering over the rocks. This will often be totally under water after heavy rains. 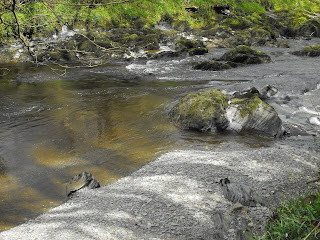 This is what we have always called the Pebble Beach (because it is one). When my three were younger we would come here and skim the flat stones of which it is composed. Over the winter months, with higher water levels and fierce torrents, fresh stones are deposited, after millennia of being worn down by the waters. 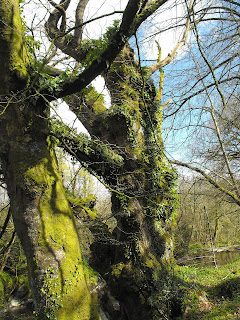 Above and below: a venerable old oak, stag-headed now, has become home to ferns and fungi alike, and supports any number of insects, beetles, and birds. 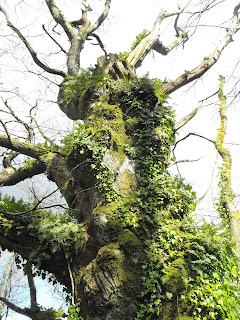 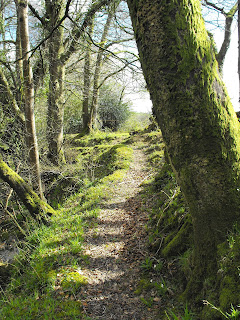 The most civilized bit of path. Elsewhere it is a real scramble, and you have to negotiate Fishermens' wooden bridges across deep clefts in the bedrock, or fallen trees spanning ditto, ducking under electric fences which go right to the river's edge, and hugging mossy trees to get through a gap. 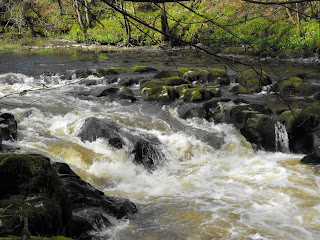 Above and below: the rapids by the Mill. It makes a change to have a different perspective of them. 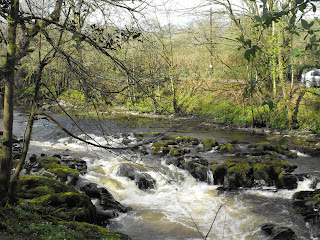 We had a lot of rain on Monday and it has washed mud and slurry from fields into the river, hence the spume. 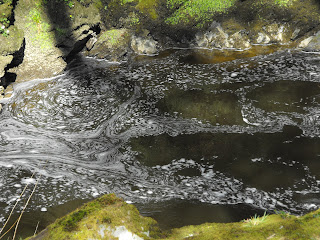 It's a long time since I opened one of my Fungi books, but I think this is a variety of Birch Boletus growing on a fallen tree. 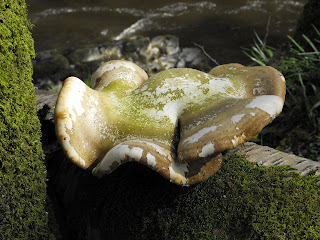 Big clumps of what I think are Hemlock Water Dropwort grow happily where a small streamlet makes its way to the river. 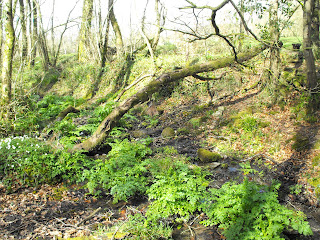 This greened bedrock is the normal river bank. 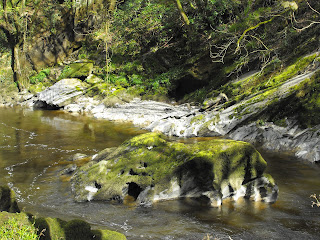 The first leaves are just coming out here. It is cooler in the river valley, so they are delayed a little, and the nights are still pretty chilly. 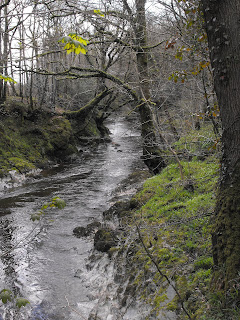 In places there are huge boulders in the bedrock which still jut out above the water and are places beloved of the water birds, especially the Dippers, who will bounce up and down on them. 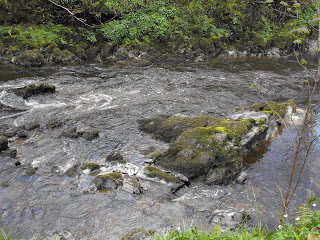 The view downstream. We turned around here as it was starting to get boggy underfoot on the stream bank, as the alder carr woodland came right to the river's edge. Years ago I went further on and found a place amongst the Bluebells where the Otters had been playing. Scampering round on a loop and then sliding down a muddy bit into the river. one of the few areas along the bank they could do that as it's mostly bedrock. 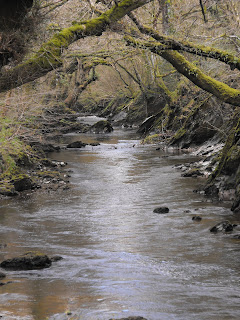