There were so many things I wanted to write about in my earlier post.  As a non-driver over the weekend, due to my health, I was able to take on board the scenery about me, and we did get about quite a bit, going to two car boot sales, and the usual shop-to-shop grocery shopping. 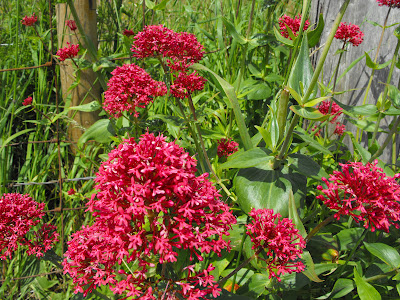 I love to look at other peoples' gardens as we drive along.  Some people go to so much trouble and have pristine lawns, never a weed in sight, and beautiful hanging baskets, or with careful placings of shrubs as a backdrop for other plantings.  Yesterday, there was one cottage in a hollow with the most amazing Honeysuckle absolutely smothered in yellow blooms.  I have never seen such profusion.  It reminded me of a little whitewashed cottage we once drove past up in North Wales, which snuggled into the hillside and had one wall absolutely awash with Ceonothus, blue as Lapis Lazuli.  Then there are the abandoned farmhouse type gardens, which bloom as they will, deep pink roses drooping sleepily in a corner, cwtched up with wild visitors such as Valerian, Meadowsweet and Hemp Agrimony. 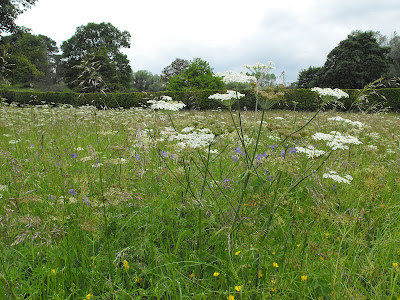 It had been a while since we had last been to this particular car boot sale (to sell), but it was a pleasant small one, and there were always friendly folk to chat with during the morning.  This was no exception.  We didn't do particularly well - I think everyone is feeling the pinch of this ongoing recession - but it stayed dry.  A chance conversation with one lady gave me an insight into her life.  She was quite smitten with our rocking chair, but her three dogs were currently obsessed with eating the cane chair in her bedroom, bit by bit and she feared ours would share the same fate!  This was the chair that overlooked the beautiful view down the valley, and she liked to sit there with her knitting, or a book, now and then glancing at the view.  That told me quite a bit about her as a person.

Upon seeing the brass fender we were parting with, another family group reminisced about their old farmhouse where they had grown up.  "Duw" they said, "That is just like Mam's old fender," and they went on to talk about the old house so fondly - I think there must have been a hue clear out and all the "old" stuff had been chucked . . .  The common story a generation or so ago.

We dropped down into our favourite little seaside town afterwards, planning for a breath of sea air and some ice cream, but alas, everyone else had had the same idea and we could not park and had to turn around and drive back home again.

We have so many family memories tied up in this landscape - memories of days out, and birthday treats, and times when we could afford to go and explore rather than counting every mile's use of diesel!

We know practically every house and cottage along the route, and I noticed that the little Gothic cottage - abandoned last time we saw it - had been bought and "done up."  I preferred the peeling pale blue paint which had once adorned the window frames to the replacement white ones, but the beautiful pointed-arch shape still translated well.  I think they could have been estate cottages once as there is another - smaller - gothic-windowed cottage further along the same stretch of road.

Fields everywhere had finally been cut and baled for haylage, or carried for silage or in some places, hay too.  One field - it is dry enough near the coast - had been growing wheat or barley and rolags of golden straw lay in stripes across the stubble.  That is a rare scene in Carmarthenshire though. 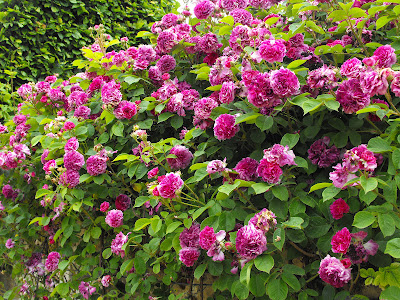 I have been going through my photographs for appropriate ones for this, but the sort I wanted were taken in other places (Haddon Hall for the roses above and the Umbellifers in the previous photo).  I hope they give a flavour of late summer here though.