Going to the corner shop for bread 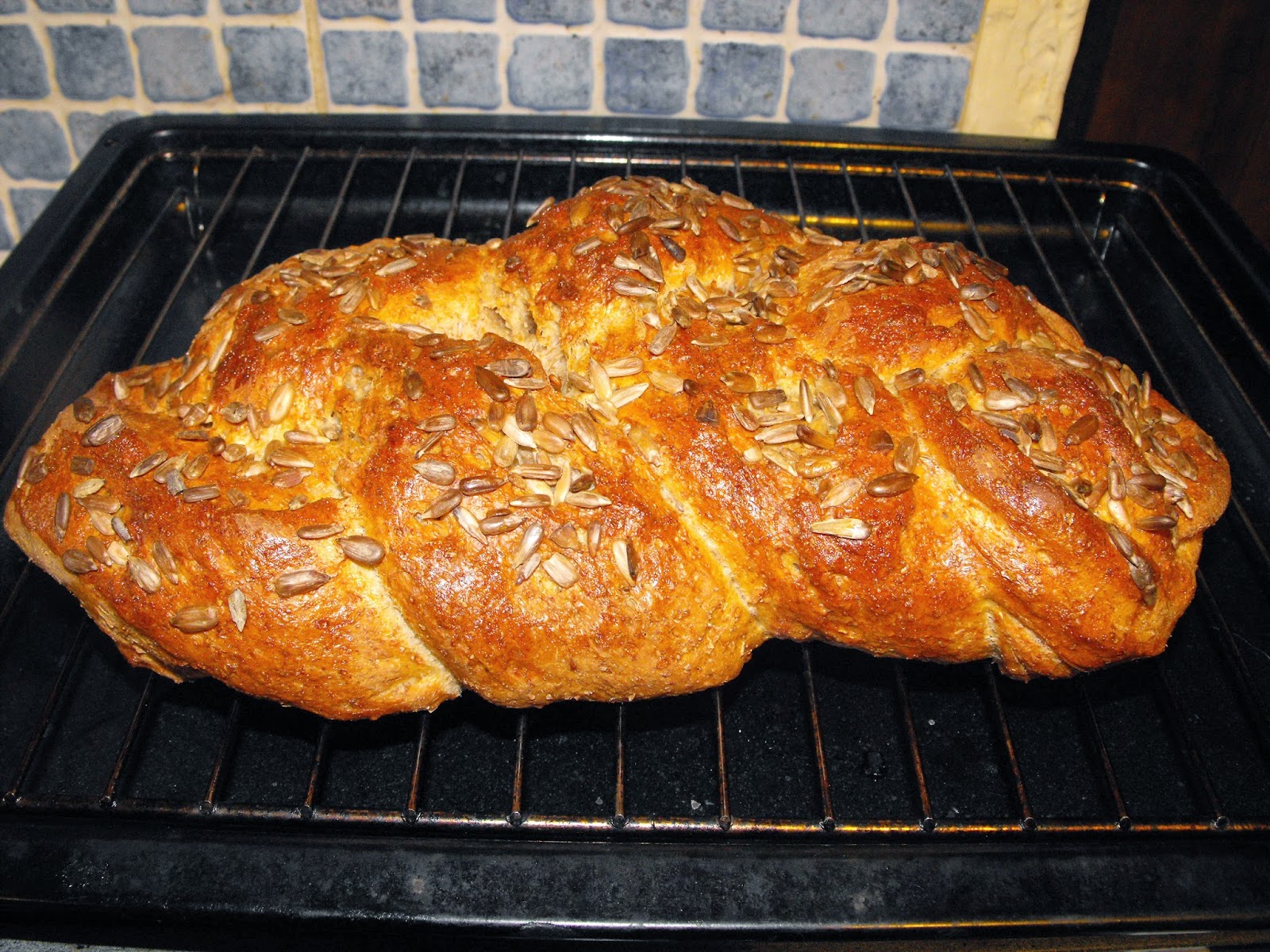 A Sunflower loaf of mine, well done but not burnt!

We were in Swansea this morning, as we'd arranged with G (middle daughter) to drop off some walking shoes which didn't fit me but would be perfect for her.  As it was the day of Singleton Hospital Car Boot Sale, we decided to get up early and call in there on the offchance of there being something interesting to buy.  Well, the "something interesting" just amounted to an old wicker basket with handle and a newish beech draining board. Anyway, as we were far too early to drop off G's things, we went into (nice WARM!) Sainsburys to do the grocery shopping for the week.  Going to Sainsbury's is always a treat for me, as we rarely go there (it's our nearest, and 25 miles from here).

Anyway, as we needed bread rolls for our Car Picnic at Malvern tomorrow, we went to the bread aisle, and there I saw it, well-done crusty bread.  In fact, more than well done, it was on-purpose BURNT!  Oh, I just HAD to have a loaf and when I got back home I cut a hunk and it tasted like the food of the Gods . . .

In fact, I will confess, I also bought some Caerphilly cheese.  I had to.  My body TOLD me it needed it.  So that went in the shopping trolley, along with my normal lacto-free cheese which I can only stomach grated and melted on toast.

I had a knife's blade thickness of the cheese and after eating NO CHEESE since last August, it tasted AMAZING!  I sat back and waited for the effect to hit me.  There was a moment when I thought I was getting the clogged-up lungs but it passed and believe it or not, my peak flow is 430, which is as high as it's got since Christmas.  Perhaps I can - once in a blue moon - have a sliver of my favourite cheese with no lasting ill-effects.  I will know later anyway . . .

Anyway, the bread has brought my childhood to mind, so a trip down memory lane is about to be inflicted on you:

In the road where I grew up in Southampton in the 1950s (and 60s) there were a few shops serving the locals.  Right at the top, by the Target pub, was a reasonable-sized Co-op which served the needs of most of the local folk.  Back down the road a bit towards us, was a corner shop called Haston's (a surname I've never heard since) and which went back deeply enough (several rooms on the ground-floor) to become a little mini-supermarket when the concept of serve-yourself first arrived on these shores.  It had freezers and fish-fingers soon became part of the staple diet of the Butts Road inhabitants.  Just inside the door, was a little whirligig of booklets and I still have and regularly use the Bread Making one which cost me all of 70p post-decimalization.  In the early 60s (when it was still a corner shop with a counter), they did deliveries with a dark brown pony who lived in their back "garden" in a very gloomy shed-stable behind a tall Privet hedge by the cut through to Orpen Road.  Sadly, he developed hoof problems (Navicular - doubtless from being hammered around the roads by the delivery boy) and was pts - or shot, as it was called in those days.)

Down the hill past my house was the Community Centre, which still tested its Air Raid Siren under the guise of the 4 minute warning in my time, and was home to a summer roost of the Swifts whose noisy flights up and down our road kept me awake on summer evenings when I was in bed whilst they were still on the wing.  I still can't hear a Swift today without being transported back in time and place.

Then, opposite my Best Friend Tricia's house, was Checkleys.  This was a real "open-all-hours" type shop, just one room deep with plate glass windows to the front and side.  Against these side windows were shelves lined with glass jars of sweeties - I think I could name them all even more than 50 years on - and my teefs bear testiment to their deliciousness!  Pineapple chunks; Cola cubes; Winter Mixture and Coltsfoot tablet (yuk!); Rhubarb and Custard; Lemon Bonbons, Strawberry Bonbons and the white sort too; Sugared Almonds which had a hard outer jacket which splintered if you bit them; Raspberries and Blackberries, which were boiled sweets; Toffees; Liquorice Allsorts; Chewing Nuts; Chocolate Limes; Sherbert Lemons; Glace Drops - oh I knew them all . . .  With the sun behind all the jars of sweets, it threw a rainbow of colour across the shop and they ALL looked so desirable . . . No-one every bought the Quality Street though, as they cost 2s 6d. (12 1/2p) a QUARTER!  Everthing else was 6d (2 1/2p).

In front of the counter were large open lidless tins of broken biscuits, to be had cheaply by dint of being broken - they were usually the boring sort - Digestives, Maries, Malted Milk and so on.  Sometimes there was a tin of little wrapped biscuits of the same persuasion, 3 or 4 at a time and I still have a scary memory of the "witch" from the dark-creosoted timber house behind the fir trees opposite us, coming across to give me a packet of these, soft and crumbling from extreme old age, just as she was.  Of course, she wasn't a witch, just old Queenie Goddard, the Botany Bay Goddard's granny . . .

For 3d (old money) you could buy a Lucky Bag or a Jamboree Bag, one of which had a square of toffee on a stick in it which you sucked and them dipped into some noxious coloured powder (or was it a Sherbert Dab?).  Even a farthing would buy you a sweetie in my extreme youth - a wrapped small chewy sweet often in a pink/lemon colourway (Fruit Salad), which usually sold as 4 a penny, and were alongside the Black Jacks (same price), pink shrimps, pink false teeth, fried eggs, fruit salad,  Frys 5 Boys Chocolate Bars, Barley Sugar Twists,  Flying Saucers, sucky-lollies on a stick, Space dust (in the 60s, after Sputnik had gone into space), Sherbert Fountains, Gobstoppers, Bubblegum, Lovehearts, Refreshers, Parma Violets.  Oh dear, as you see, some things never get forgotten.

Crisps were made by Smiths, and Smiths only, and came in one persuasion - plain - with a small twist of salt in dark blue greaseproof.  I loved Potato Puffs and I wish someone would make those again - I would be their best customer!

Anyway, I digress.  Mum would give me some money (I can't remember the price now) and send me down to Checkleys to get a loaf of bread.  A cottage loaf.  Nice and crusty.  I always chose the one with the Most Burnt Top, and before I had got one foot off the shop step, the first handful of the top, blackened, crusty and wonderfully tasty, would have been in my mouth, and by the time I got it home, I would often have eaten the top "knob" - the burntest bit!

So Sainsburys, you are onto a good thing.  Here's one customer who will make a special trip back for your burnt on purpose bread!!!
Posted by Bovey Belle at 05:36