Isn't she cute? She and a friend had "got out" of their pen and were galloping madly across the yard and up the trackway opposite. Full of the joys of spring!

The work out "front of house" continues, and we rounded the weekend off with a very useful bonfire, which got rid of a lot of the detritis which was making it look such a mess. My husband has been busy with the chainsaw, cutting the Willows he planted right back and I am hoping that the willow wands I rescued may make up into a support for my Sweet Peas, although they are probably cut at the wrong time of the year. I have planted 3 little rambling roses which I have been nurturing all winter after I had found them suckered into the ground below the parent plant (possibly Seagull or Rambling Rector? - a beautifully-scented rose I was given as a sucker from the parent plant by our neighbour at the mill!) I also had a home-grown Honeysuckle which I had been intending to take with me for the next garden, but since I doesn't look like the next garden is going to be happening for a few years yet, as the house market is completely dead, I thought that I may as well plant it. Then I found 3 well grown self-seeded wild Foxgloves on the muck heap, so those have been transplanted too. I have literally 100s of Aquilegias, so those will be the next thing to be moved to the front. I need to quickly get a coat of the brown stain we used on the stable doors last year, onto the "new" post and rail fence, and then I can plant the Aquilegias beneath it and the shrubs behind it.

The far end still needs clearing, and I want to get the middle dug over and planted with Spuds, as there is a good depth of loamy soil there and it may as well earn its keep . . . So I have bought some Maris Peer seed potatoes which are chitting in the greenhouse beside the Maris Piper.

Yesterday I got some beans started in trays - Scarlet Emperor, which is the best of the runner beans in my mind; some Monastic Coco beans which I was given ahem, a couple of years back (hope they grow) and some French beans which I happened to see on someone's Bean Blog, under the wonderful name of Nun's Belly Button from the black design around the middle! I need to get some Italian Flat Bean seeds today, as they grow well here and freeze too. As you can see, my new greenhouse is earning its keep already. 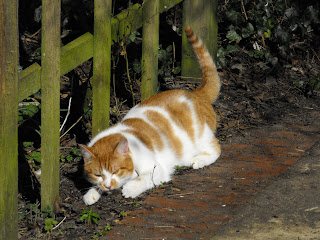 Alfie with a small shrew he had caught. 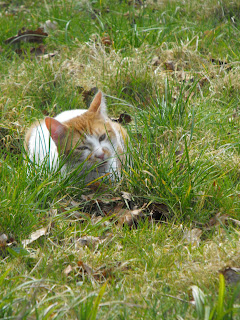 Here he is debating about hunting up another . . . 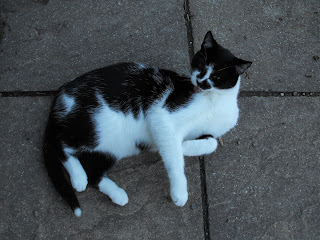 And here is his brother Tippy, who is such a funny little thing. Whenever I am near, he does a forward roll and asks to have his tummy tickled! His brothers roll over to be tickled too, but they don't do headstands first!

Did I tell you we have an incredible amount of tadpoles , as you can see from the pics - we have NEVER had so many!

Despite being frozen solid several nights from heavy frosts, they have survived!

They like the really shallow spots where they can sunbathe. There is no waste - the egg cases which weren't fertilized are being devoured by them . . .

A few of the young fish sunbathing in the main pond. We have about 40 who survived the winter, when their parents suffocated beneath 6" of ice . . .

There's nothing like a good bonfire. We fed this one for about an hour!