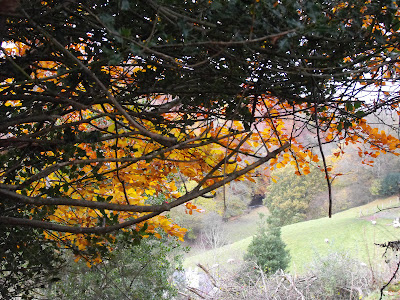 Good evening.  Well, we have had an absolutely wonderful day out in Hay-on-Wye again today to celebrate my husband's birthday.  It was raining a little when we left home, but cleared around Brecon and stayed dry all day until we were driving home, and then it got increasingly heavy.  It did stay dry long enough for me to pop out just as we were approaching Brecon on the way home and I angled the camera through the sheep wire to get a snippet of the view with stunning autumn colours.  As we drove along, I kept saying to K to write down descriptive words of the autumn colouring for me.  The focus was on beech, field maple, birch and hazel and they were incredibly beautiful in a medley of autumn colours.

The beech trees were the most noticable as they were so much taller than everything else and didn't blend into the scenery in the way the murky dun and bright bay of the oak tree foliage at this time of year.  The beeches were a mixture of cinnamon and butterscotch, sometimes with a foil of lemon yellow silver birch leaves in front of them.  The field maples were as yellow as English mustard, or as golden as palomino ponies, and were often planted beside hazel which at this time of year reminds me of lime marmalade, with a sprinkling of leaves like golden sovereigns.  The blackthorn bushes were fast losing their leaves and in places only tiny stipplings of gold remained, like flecks of gold dust.  The road for almost the entire route home had autumn colours dripping over it.  A shame I was the designated driver for the day . . . 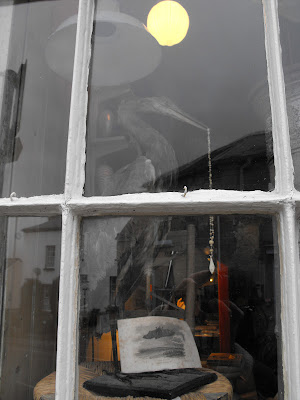 This is a glimpse in the window of an antiques shop we haven't been in until today.  It contains the most eclectic display of wonderful things.  It is our eldest daughter T through and through!  Just seeing the stuffed heron in the window gives you an idea of further inside . . .  When we were there back in May, she had a pair of zebra-leg  table lamps in the window (already sold!)  Bizarre! 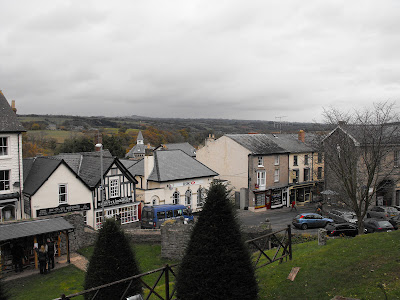 A view across the Hay shops from the Castle steps.

We had lunch in the Sandwich Cellar in Back Fold - where we always go.  I had my traditional sausages in a bap and OH had his traditional bacon bap.  Scrummy!

Then it was off to explore our usual bookshops and the antiques shops, which was thoroughly enjoyable, even though we'd last been about a month ago with T.

We were careful with our spending and although my OH found me a little Torquay pottery cream jug in an antique shop on the way, it had a tiny chip and was only £1.  He bought a new book (on Transylvania), and I found one on collecting Horse Brasses, and a lovely old one on the New Forest, and an interesting one I'd picked up before.  I shall share them with you tomorrow.  My total spend was £11 and his was £7, so we didn't splash out too much.  When you consider the sheer number of books in all those shops, it could have been VERY much worse if we were rolling in it! 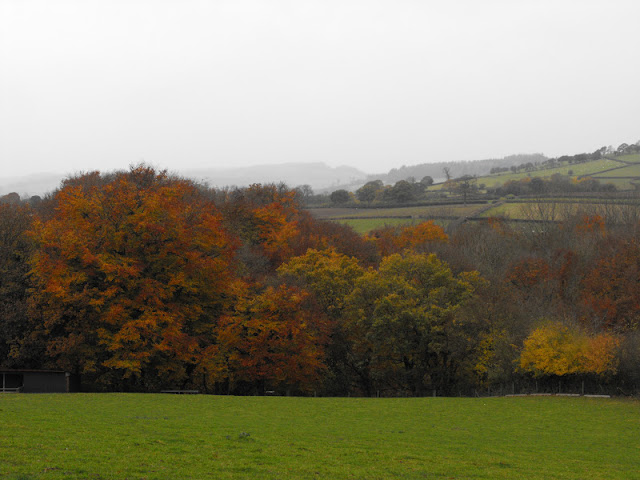