This walk was Hard Work! 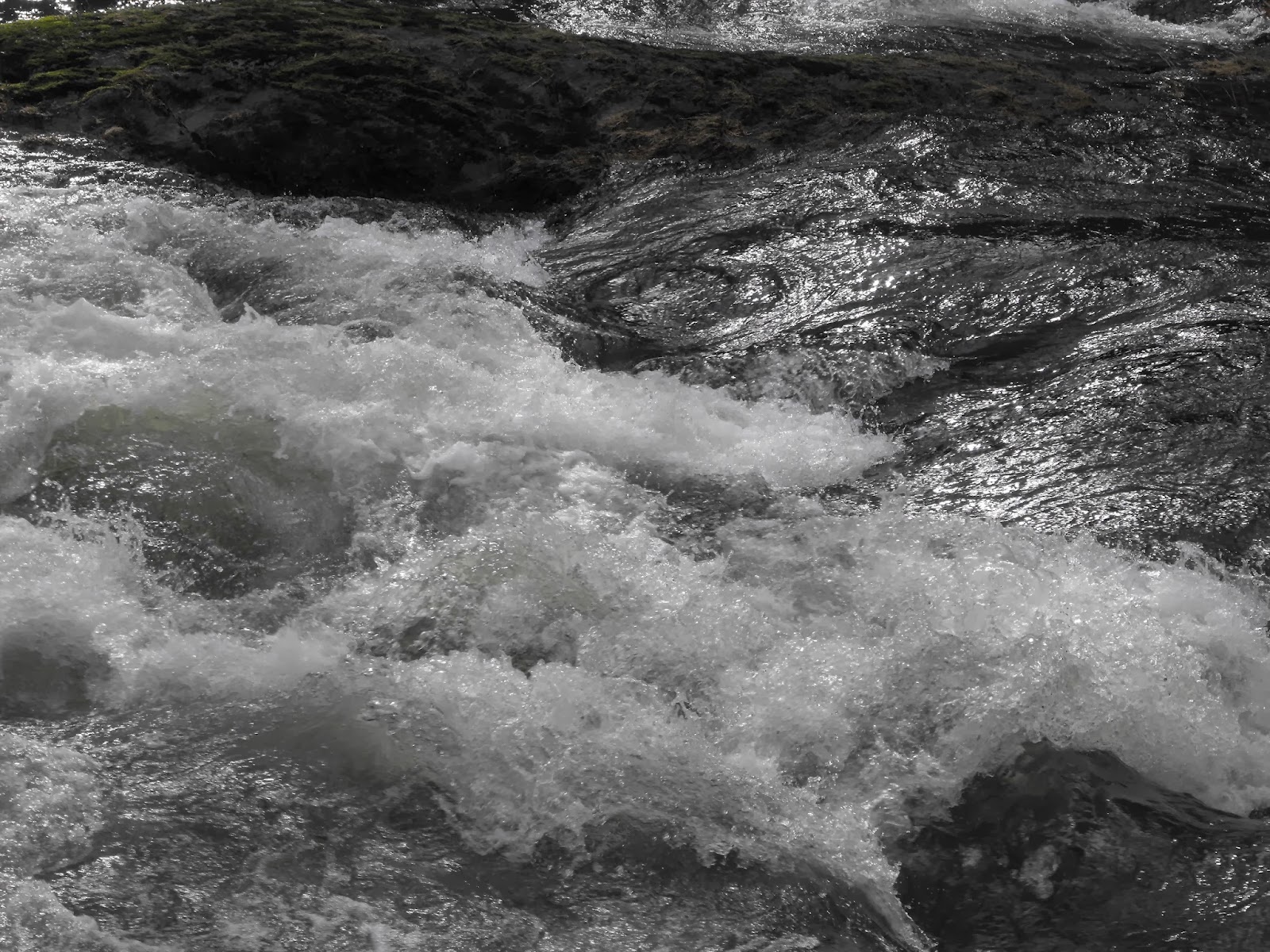 It was dry again yesterday and I set off for a walk along the valley, towards the A40.  The river had dropped but there was still a fair bit of power there.  It wouldn't do to fall in, that's for sure.  I never tire of the river - it changes from day to day, and when it has been raining, from hour to hour.  The speed with which it can rise is quite frightening.  Our friends along the river live in dread of the phone call in the wee small hours, warning them of a red alert . . . 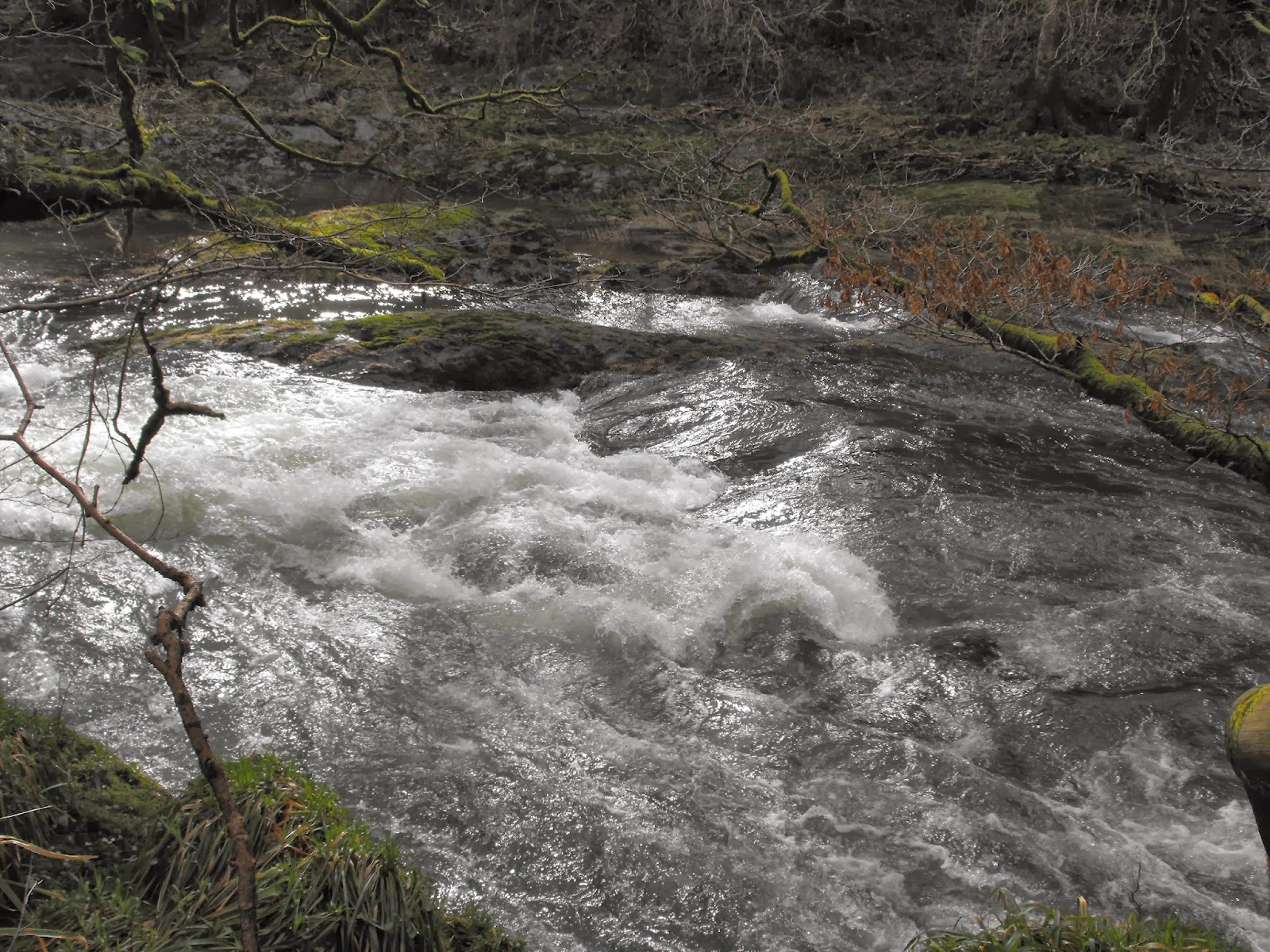 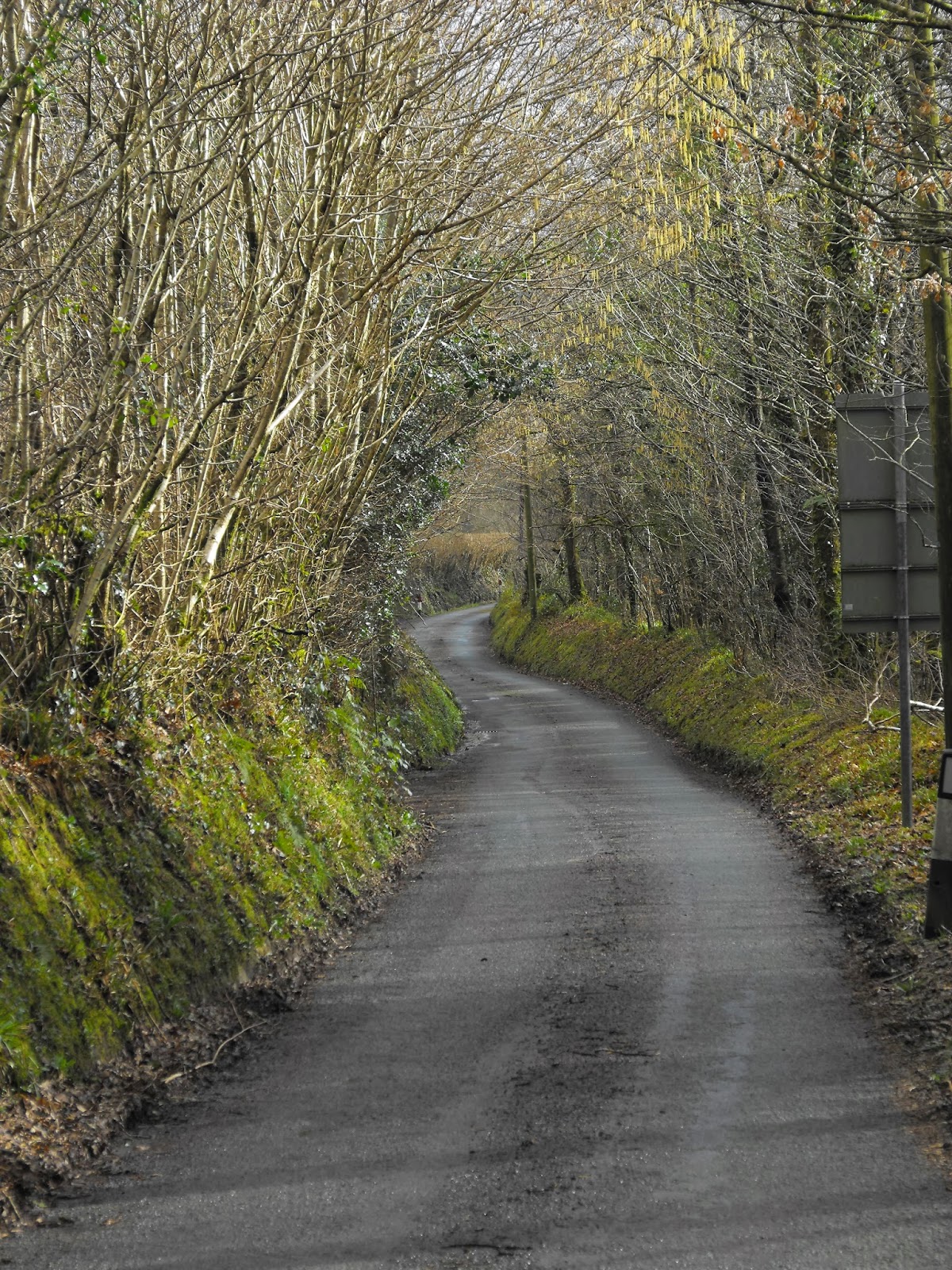 The lane ahead, with sunlight brightening the olive green of the moss on the steep banks and changing it towards emerald.  I think I can just see a couple of leaves on the bushes atop it (on the left).  Possibly honeysuckle or more likely, elder, as I have big buds on my elder shrubs in the paddock and yard. 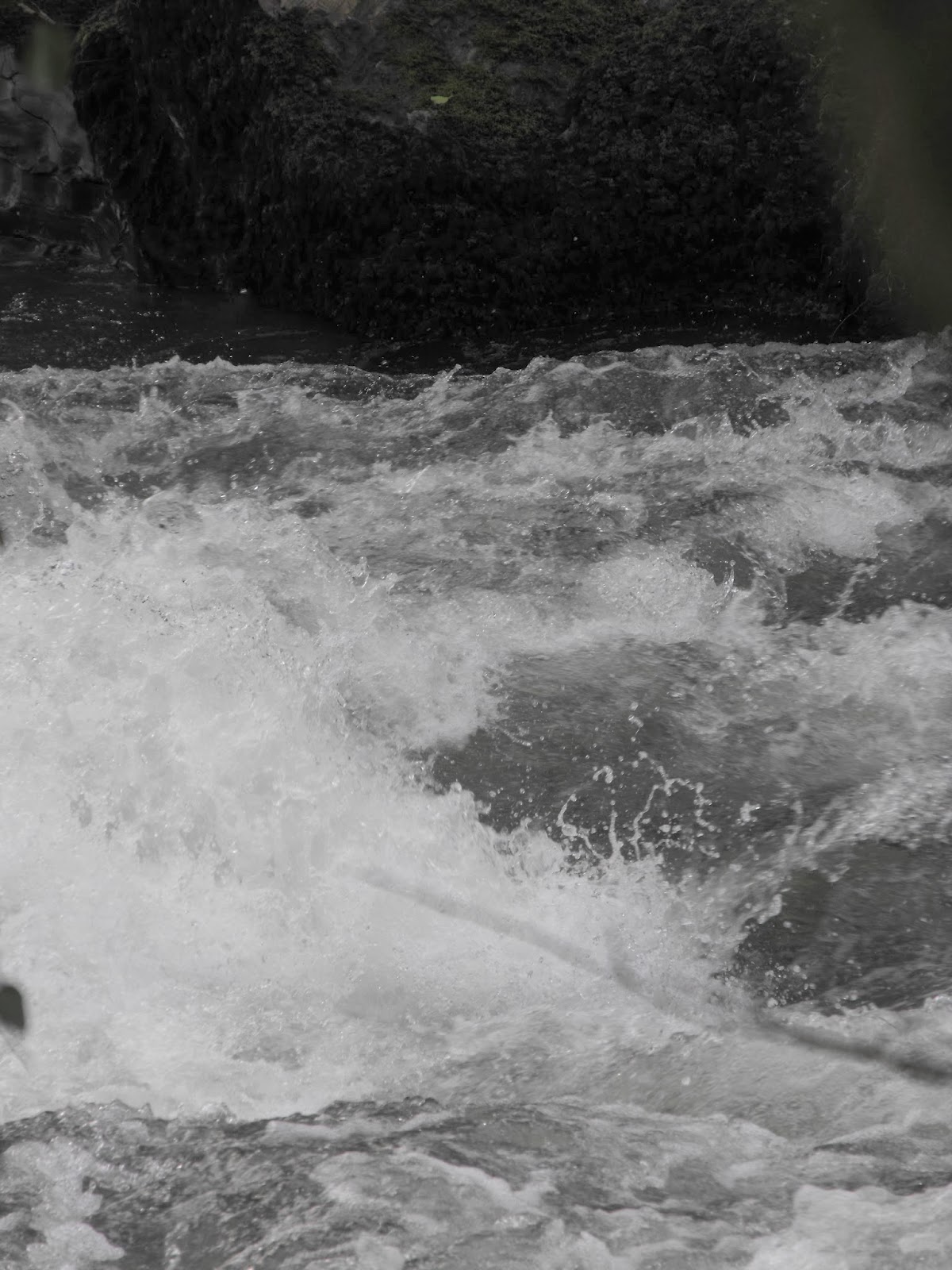 For once, I even got droplets of water in the spume! 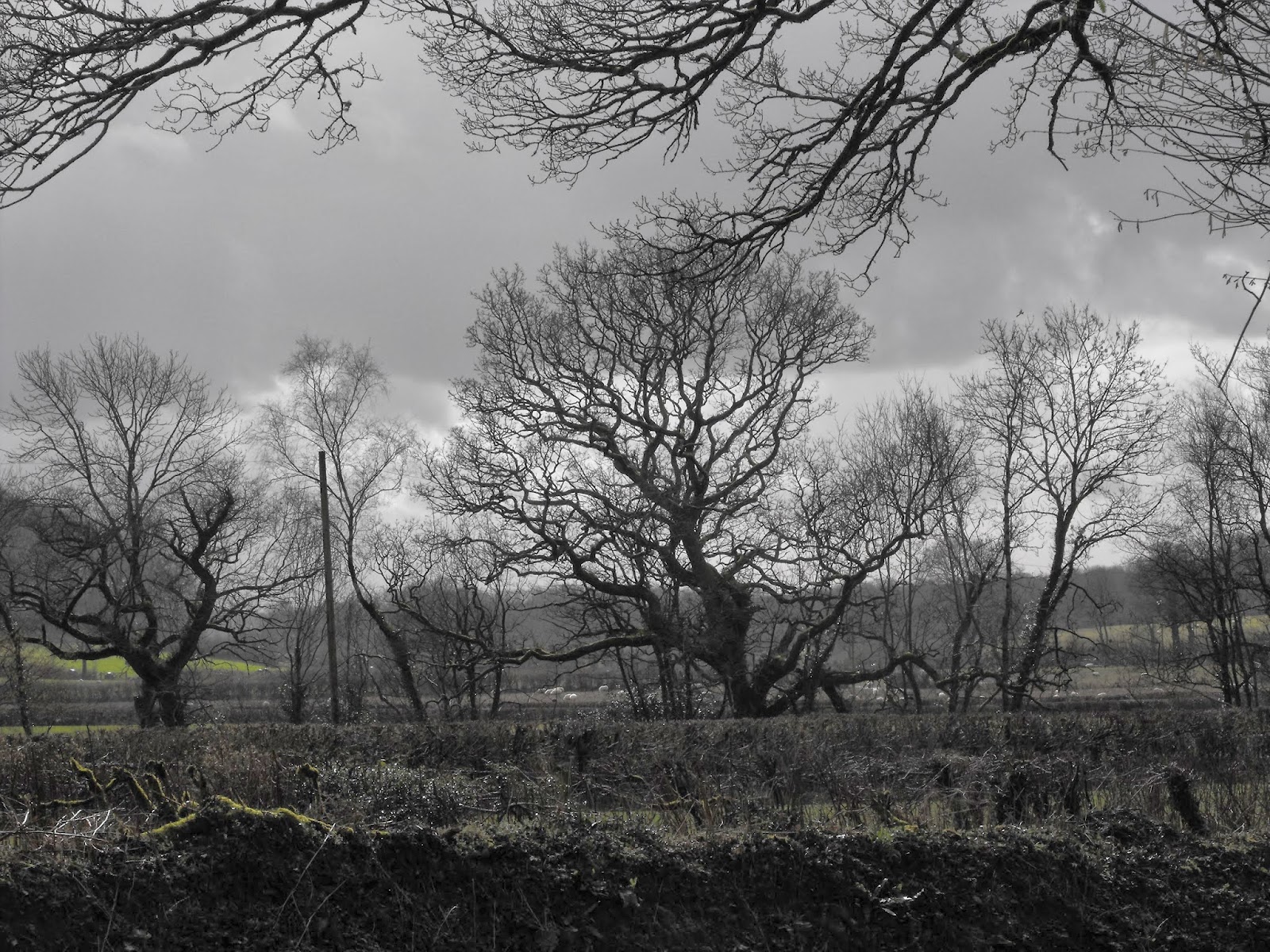 As I said, it was DRY . . . rather than sunny.  Yet this photo of the tree shapes has tiny highlights - only of shades of green - which enhance rather than underline the drabness of a February afternoon. And again - this is a tree I would scarcely notice in summertime. 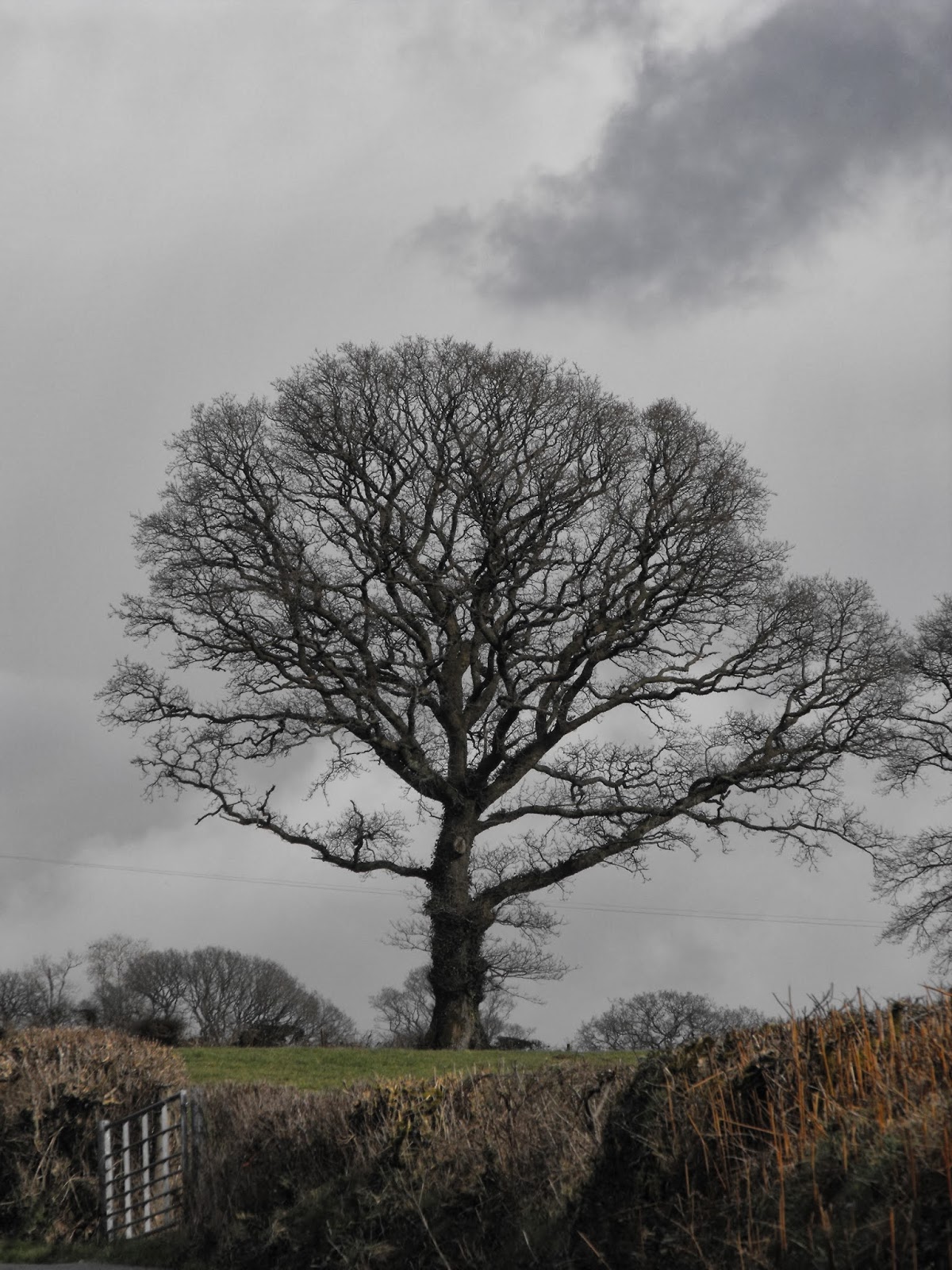 This splendid chap is beside the lane leading up to Llanfynydd. 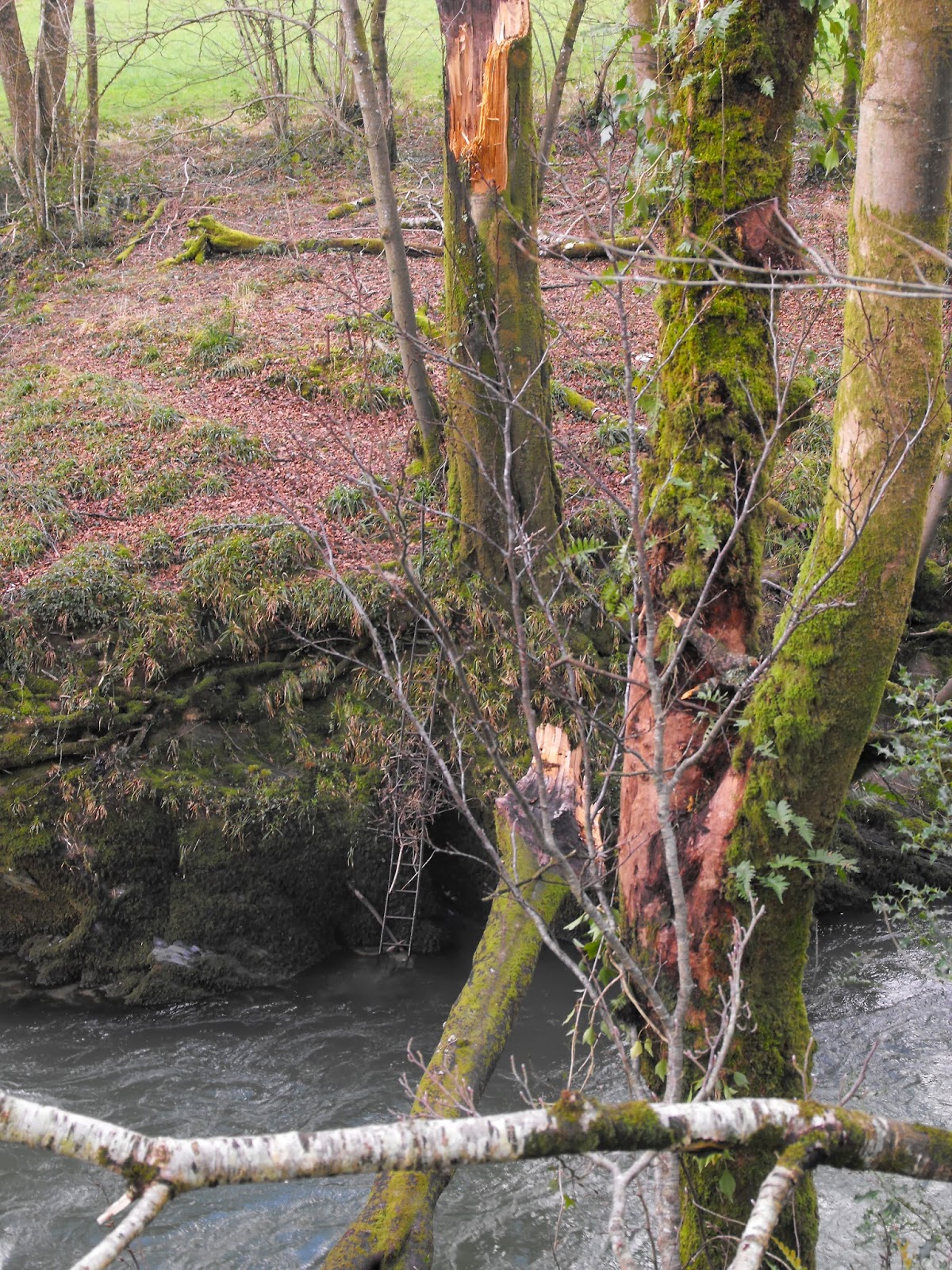 Recent storm damage to one of the riverside trees.  There are a lot of beeches here and also a fair bit of disease in the trees. 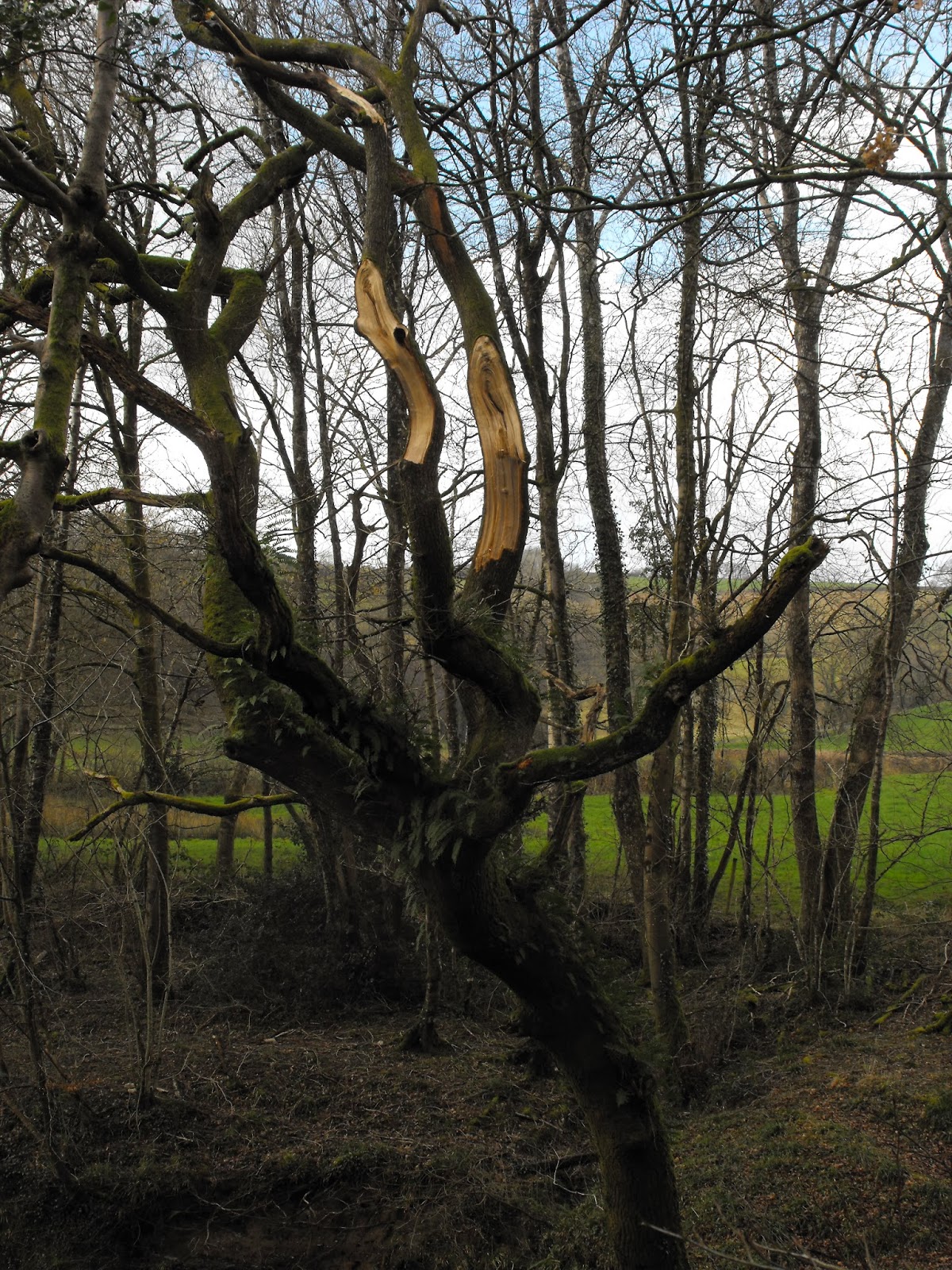 In falling, it side-swiped this tree too. 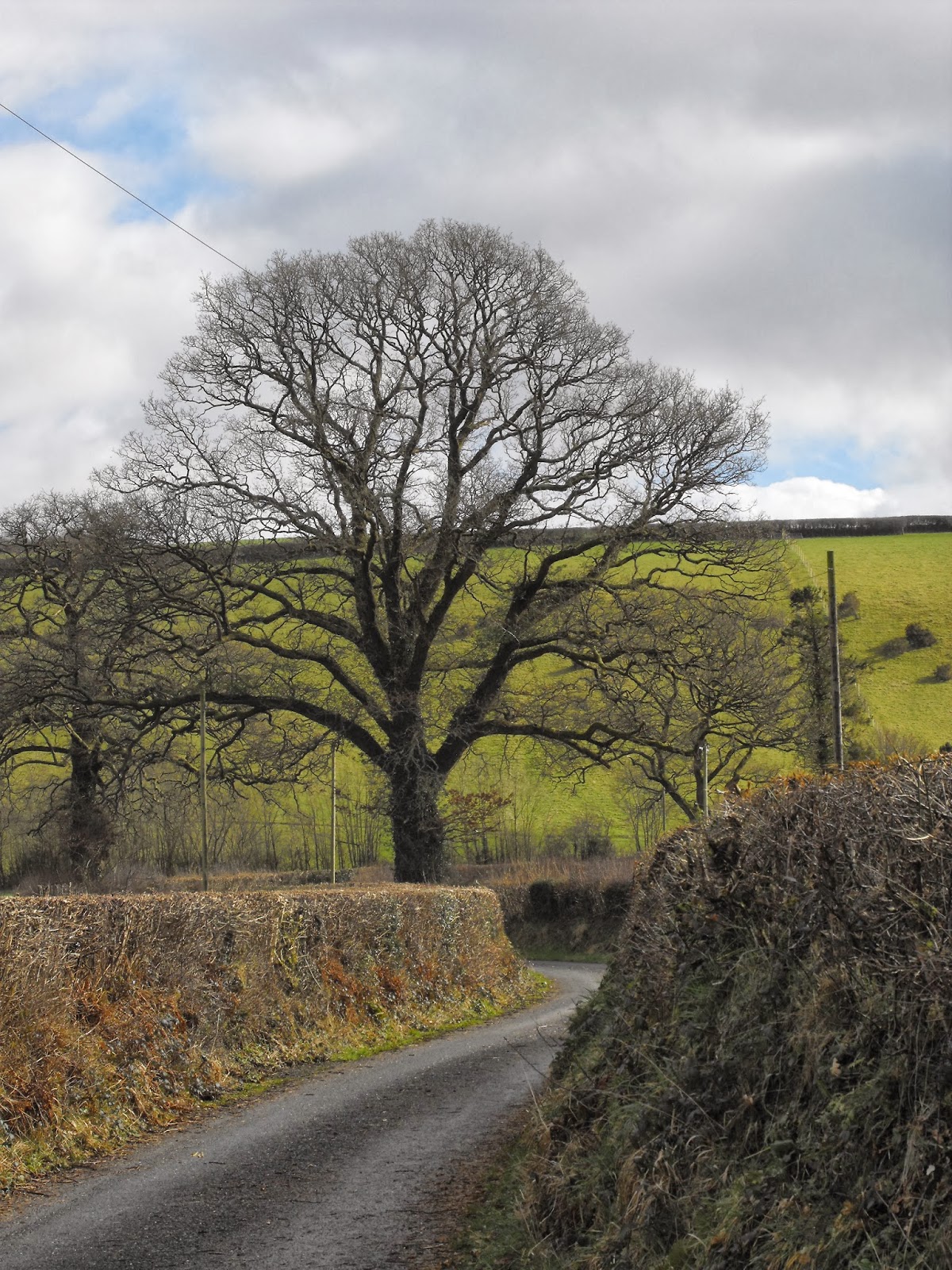 The lane ahead, and another winter tree.  I took the little lane by Fynnonau leading me up past Eisteddfa.  Eisteddfa means, from what I recall, "meeting place" and may have been associated with St Egwad, back in the early days of Celtic Christianity.   Ffynnonau means "springs" (as in source of). 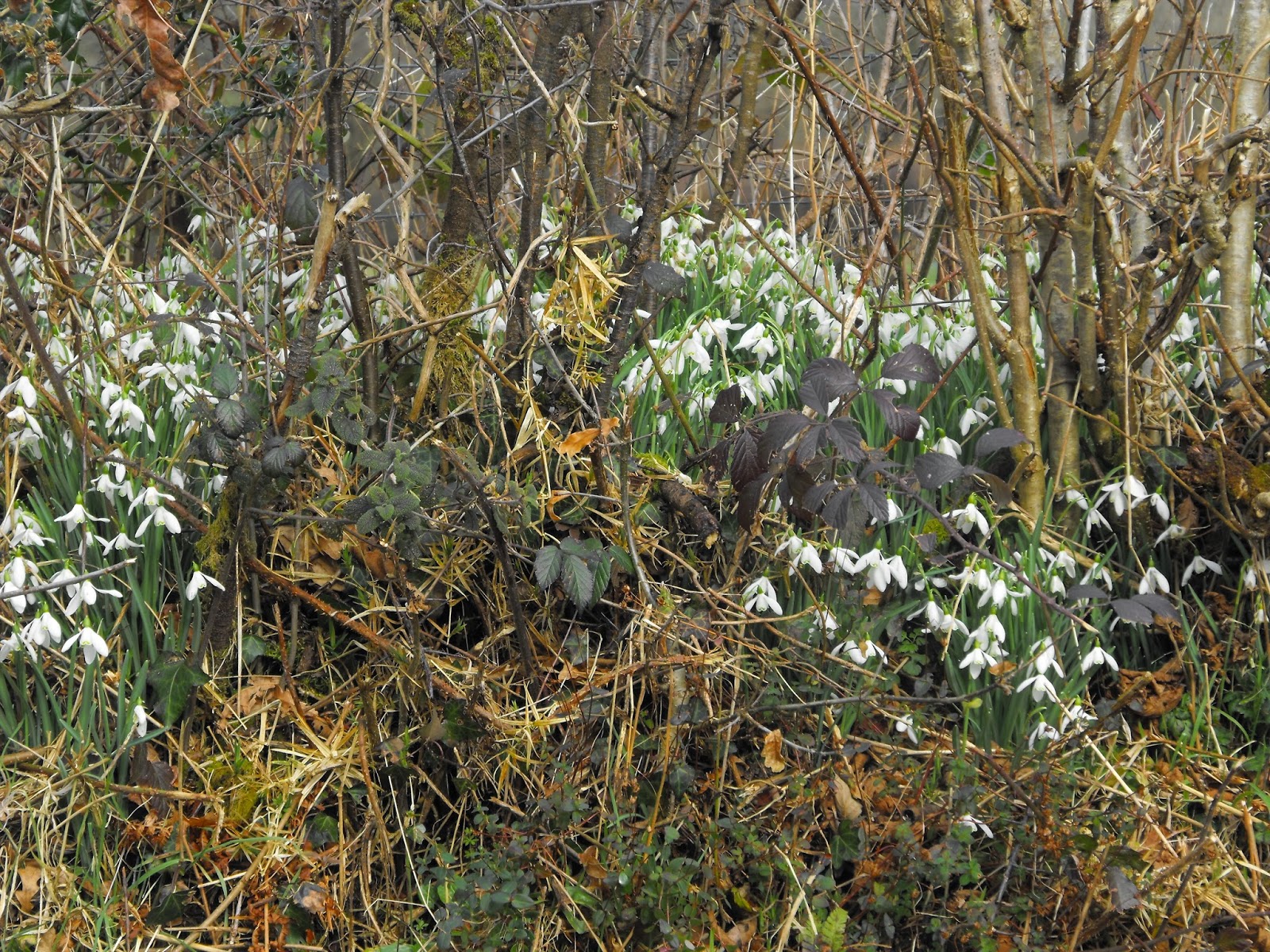 Snowdrops crowd together on a bank top. 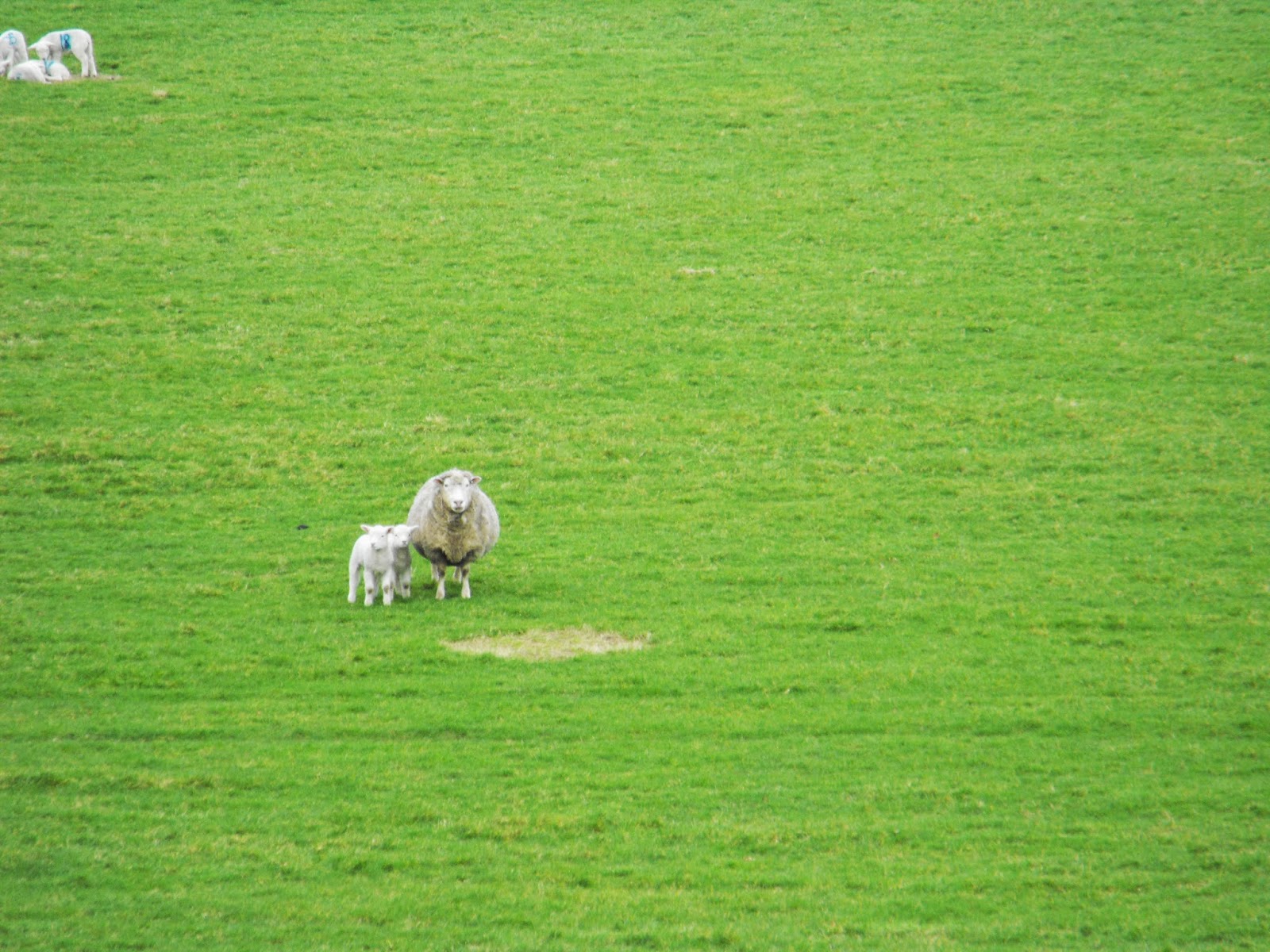 LAMBS!  There were quite a few of them in this field, and for once, some COLOUR - even though green is the way to go . . . 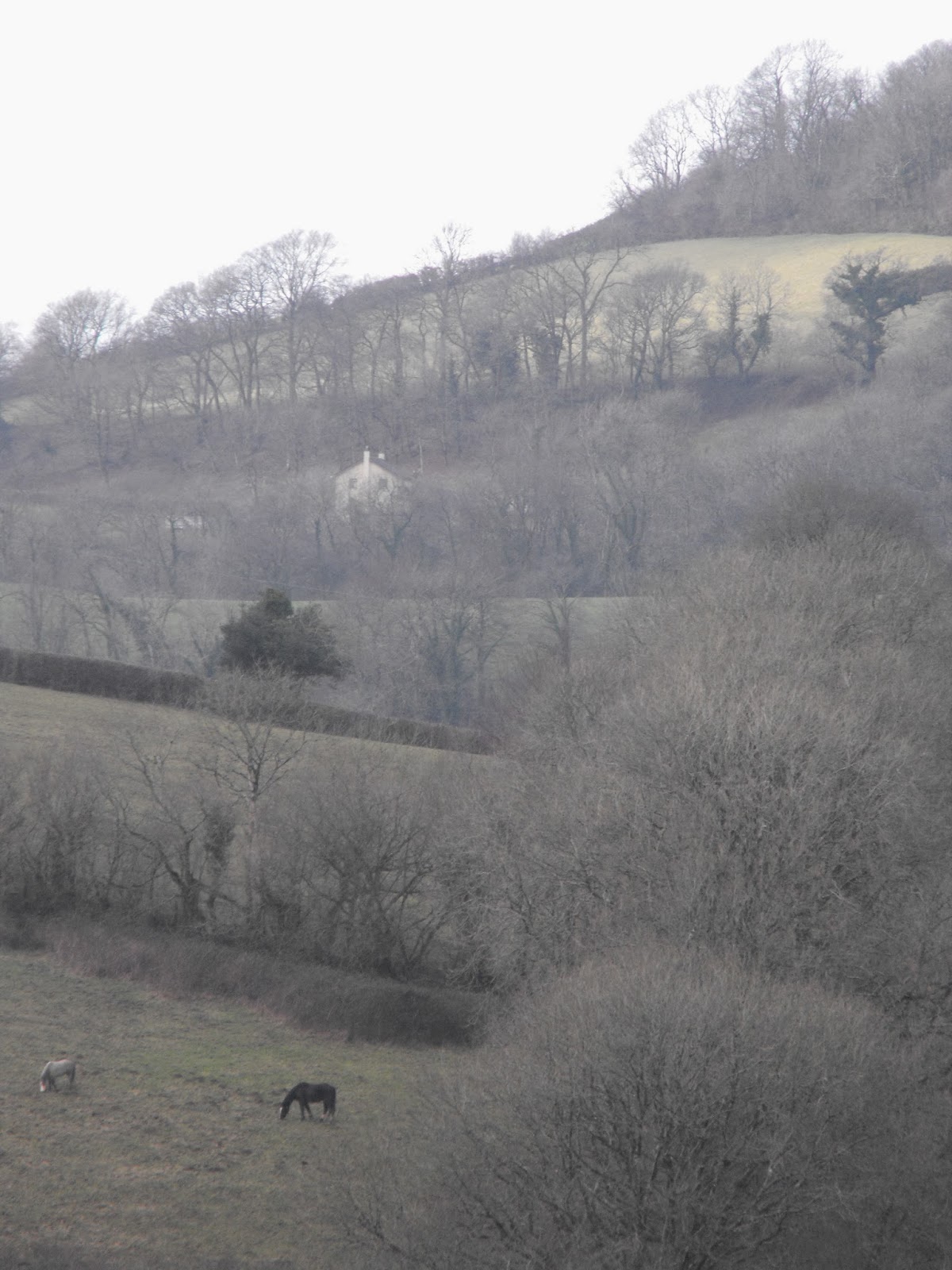 Back to virtual monochrome again for this view across the valley.  Section A's in the front field from the same stud where we bought our little palomino Merlin 25 years ago now.  He would be 26 this year, if he is still around. 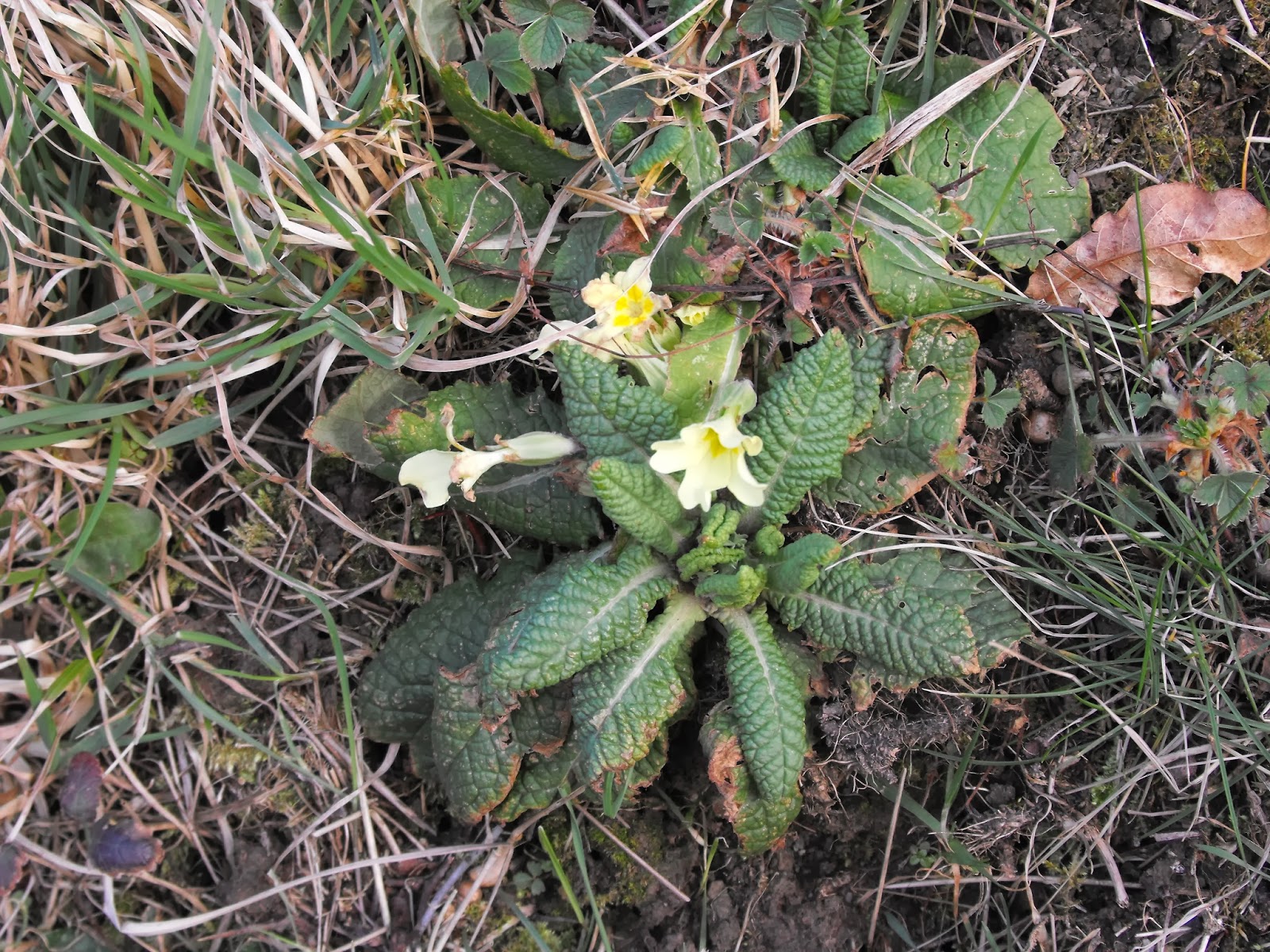 I have to say, by this point on my walk I was struggling a bit.  Just not really in walking mode, and my lungs were starting to complain (my fault for not drinking enough water I suspect).  Anyway, I phoned my husband to come and rescue me, and noticed this Primrose just as he arrived. 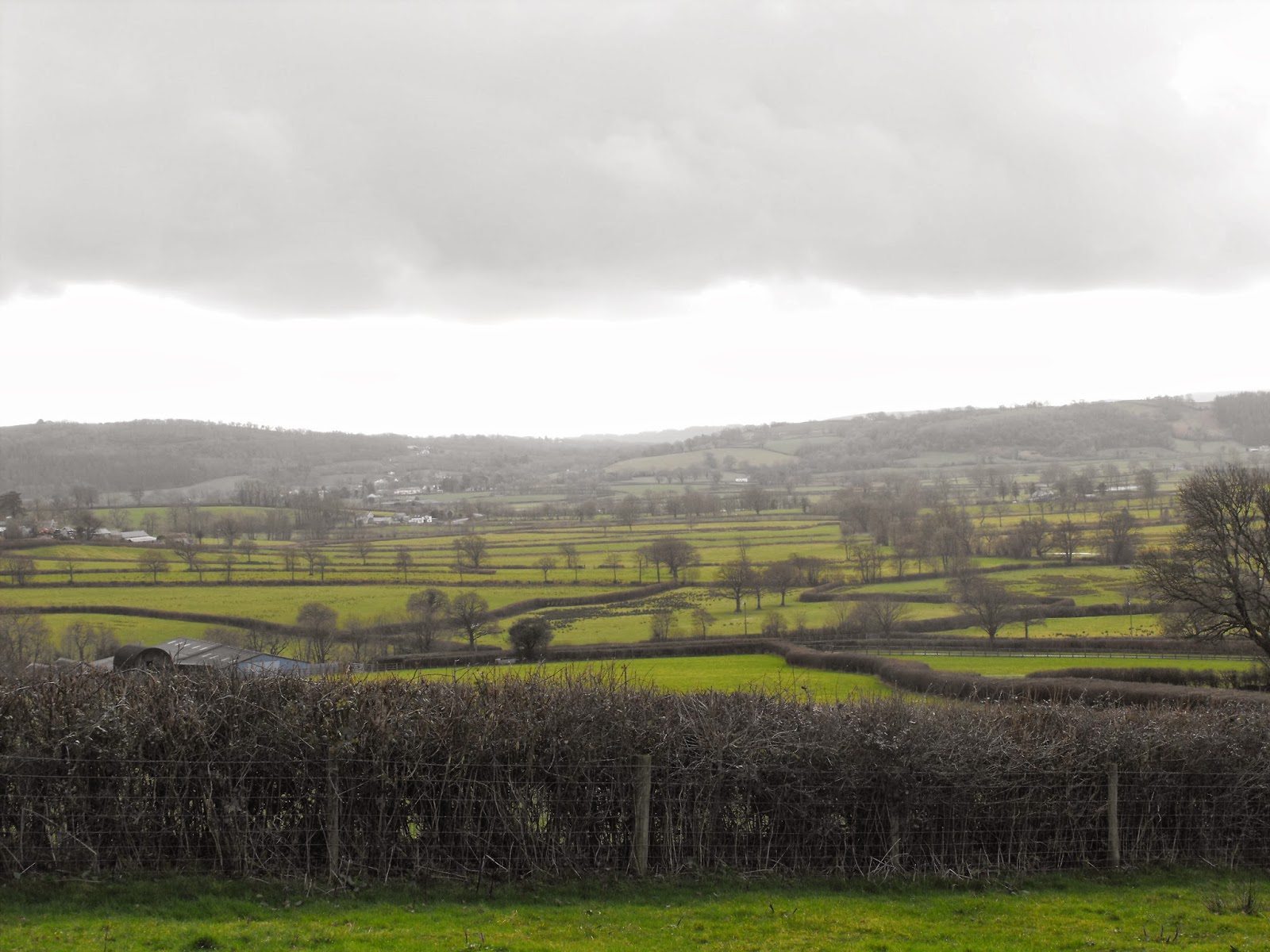 This was where I was heading before I got tired. To the left of the picture is Wern.  Straight ahead are the flat fertile fields of the Towy Valley.  Llanegwad village may just be visible on the right, and the A40 is out of sight beyond the fields.  The green of the grass suggests it is just starting to grow again, and whilst we had a chillier day today and a downpour of hailstones this afternoon (just as I was outside cleaning the bay windows), spring seems a step closer.
Posted by Bovey Belle at 08:40