. . . and boy has it rained today, pelted down all morning, and guess what, we found a big hole in the Back Place (lean-to storage) roof.  Courtesy of the scaffolders we had here.  They had taken the scaffolding down when we were out for the day, and you can't see it from outside, only above or below.  It's in the furthest section, where we don't go unless we need paint anyway, but it will mean replacing the roof sheet.  Fortunately we have some, but they are in the undergrowth at the side of the chicken shed at the moment, so when it has stopped raining, we will dig them out and it's a job for next week.  As will be replacing the lights down in what was mum's bed sitting room.  We found some wall lights which also double as ceiling lights, as they have a swivel on them, and got 4 of those and got some some Much Better Bulbs to go in them.  I wouldn't have chosen the finish that my husband did, but I was past arguing by that point (he was muttering about having some "useful lights he had put in the shed a few years back" which he could use instead, and rather than have words with him in the shop, I just went with the flow!!)  Men . . . 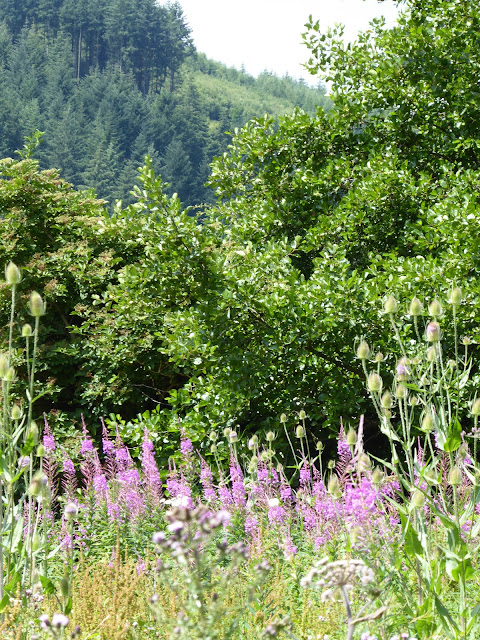 I think I need a couple of views of a dry day at Tretower recently to cheer me up. 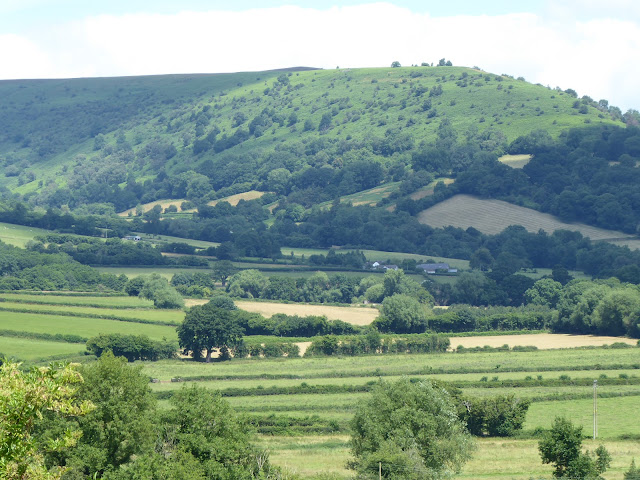 Today I am up to my ears in fruit which needs dealing with.  From the Abergwili £1 boxes yesterday I picked up purple plums (about 8 lbs of them). Some have been stewed up to be frozen, and the rest I will probably make chutney with, as today it was cherries from there, 2 punnets of very ripe ones for £1, so I got 4. I'll have to stew those up tonight. Yesterday's rhubarb is cooked and ready to be eaten as desserts for the next few days.

I also started Beer Bread this morning - in fact, it is a no-knead 5 minute Artisan Beer Bread, and it is slowly developing down in the kitchen now. Should be ready about bed-time, which is never good as freshly baked bread smells SO wonderful!  I will take a photo tomorrow.

I am now pondering about drying the cherries rather than cooking them (need more room in the freezer really).  I will need to pit them, but I have a cherry stoner in my drawer, so watch this space.

I dried the very few Redcurrants I had, and the last picking of Blackcurrants last week.  Took much longer than expected, but they have dried nicely and are now in a glass storage jar.   I hate using plastic storage for anything, and collect good sized glass jars when I see them at car boot sales etc.