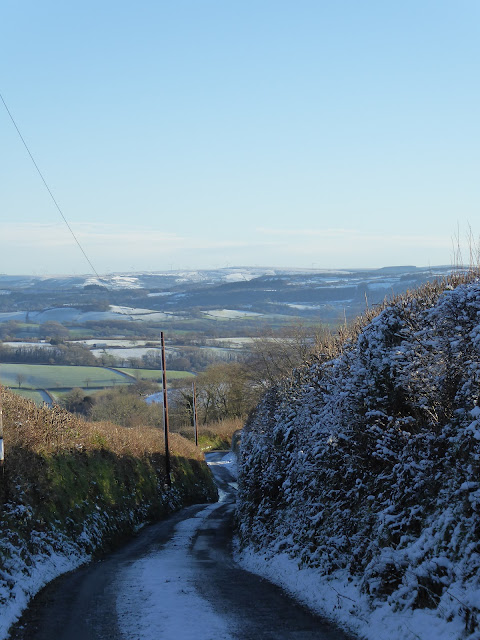 This was the lane downhill to home.  There were a few icy spots where the sun hadn't reached, but easily avoided.  You can see from these photos that the snow had just fallen lightly on the higher ground, and there is a definite snow-line.  In the photo above the view is our Cothi Valley, then across the Towy Valley and the hills on the far side.  I'm glad I was able to get out and take these photos as today, after several hours of freezing fog, which bedecked the hedgerows and trees with a spangling of silver, it came on to rain and is warmer, so much of the valley snow will be gone in the morning. 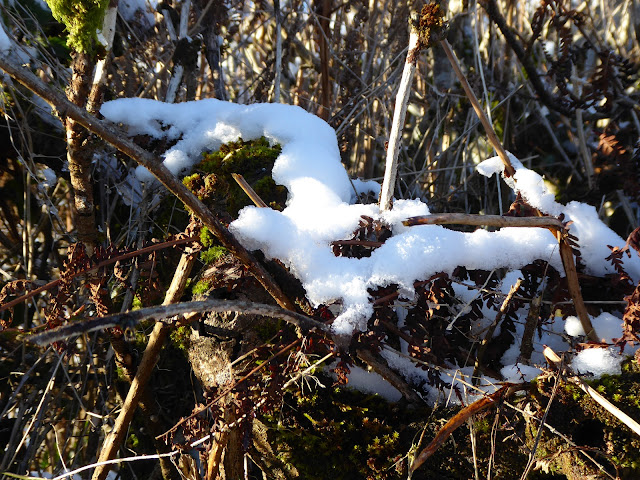 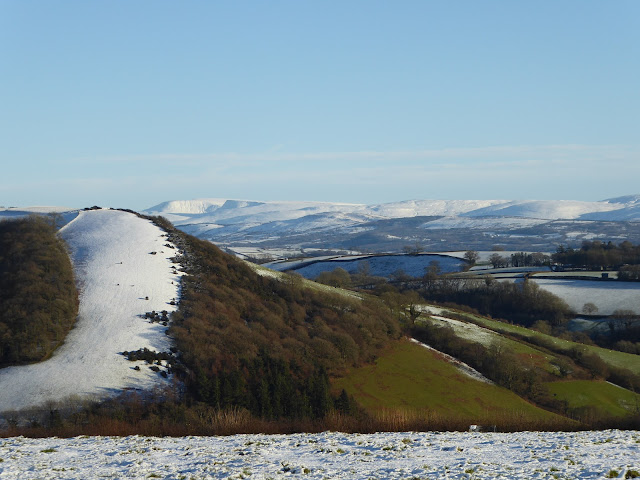 A great hill for sledging (provided you could stop at the bottom and not end up amongst the trees that border it!) but a heck of a climb back up to the top! 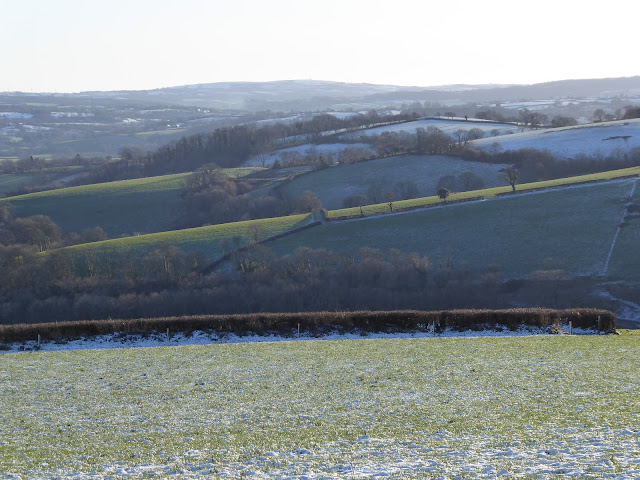 Looking towards the far side of the Towy Valley again.  You can see we really did have just a smidgin in places. 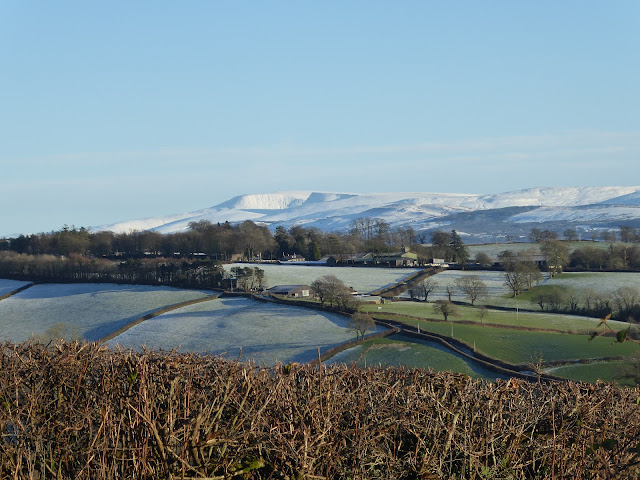 Black Mountain in the distance.  As you can see, I have an excellent zoom lens!, as the header makes it look like I was stood just a hill away.

A busy day here today, as I had to see my Respiratory Nurse first thing about my problems with the asthma medication I am on, and the side effects of the palpitations/arrhythmia.  I have a different inhaler to try in tandem with the stronger Fostair I am on, so fingers crossed.  The results of my heart tests had come back and I am fine in that department, apart from it being slow, but it's been like that for years now, and as the Consultant said in hospital, whilst I will probably need a Pacemaker at some point in the future, I'm OK at the moment.  P.H.E.W.  The best thing is I am cleared to walk as much as I want, hills included (I do them though they make me puff).  Oh, and apparently I HAVEN'T had a heart attack . . .

Then after lunch we had to take Alfie to the vet as he has an abscess brewing on the paw that Theo bit.  Serves him right!  He was very good at the vet's and didn't even flinch when he had his jab, but he was very vocal travelling.  It could have been worse - remembering those "open the blardy windows quick" moments when other of our cats have got scared and you-know-whatted in the cat carrier . . .

So then I had a lazy afternoon as there was only an hour or so before it was time to start making the evening meal.

Reading-wise I am 1/3 way through a novel about the Ghosts of Culloden Moor, which isn't an approach I would have thought of.  I shall see it through, although Phil Rickman still gets my vote, along with Diana Gabaldon for escapist reading matter.  Books you can read and re-read.  We have now come to the end of the current series of DG's "Outlander" on tv, so I think I will have to watch it over again, an then wait until it comes out more cheaply on DVD before I buy series 3.  Any other followers?

Tonight we are going to watch something I recorded the other evening, "The Second Best Exotic Marigold Hotel", so I'm looking forward to some colour in the middle of this bleak winter.  This morning I was down early and watched David Attenburgh's programme about Jumbo, which was really interesting - the poor creature suffered during his life of captivity, and his beloved Keeper, a rather dour and unhappy chap, used to sit and share beer and whiskey with him!