View of the Brecon Beacons when we were on our way to Hay this week. 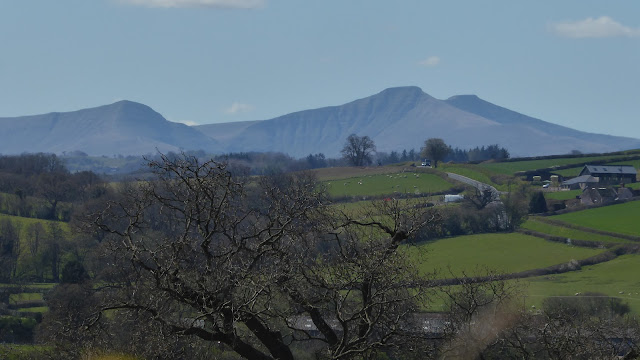 Well, this afternoon Keith and I watched as the Royal Family laid to rest HRH Prince Philip.  I don't mind saying that I had tears in my eyes, as I am an emotional sort of person and because the Queen coped with this alone - there may have been her family with her, all Socially Distanced of course, but she had to sit alone and keep her chin up and try not to cry in public when her husband of 73 years, her one true love, was laid to rest.  I think that would be a big ask for any of us.  I felt it was a very moving ceremony and wonderfully planned by Prince Philip and choreographed today.  I have just noticed on my newsfeed a little clip of Princes Harry and William, talking with Kate as they left the church.  I am glad that on this day at least, they have set their differences aside.  I am unashamedly a Royalist and always had a lot of admiration for Philip, the Rock behind the throne, although he had to always be in the Queen's shadow. He may have been privileged, but used that position to do a lot of good in his life.

Aside of that, I have had to rest up today, with a good book, the new Barbara Erskine novel The Dream Weavers, set not far from us here along Offa's Dyke and in Hereford.  I can recommend it.

Late yesterday afternoon I suddenly began to feel very ill - sick and dizzy with ringing ears and my head began to whirl like I had drunk two bottles of wine.  I had to be helped to bed and only felt OK as long as I was laid flat in bed.  I am guessing it was a viral Labrynthitis and fortunately it was short-lived. (The treatment is a particular antihistamine and I take one each morning. I managed to stagger to the loo in the night without the whirling head returning and although I've had no appetite today, I have just managed to cook Red Rice for tea and eat a portion.  Tam complained of feeling nauseous and dizzy last week, but put it down to side effects from her jab.  Perhaps it was something she picked up at the Vaccination Hub as they make you remove your mask and wear a new surgical mask - no good for either of us as they fall off our faces - we have small ears and the wrong size face for them.

After the funeral, Keith and I sat out on the swinging seat - I with my new book and he just enjoying the sunshine.  Then he did a little work to prepare some old oak for a repair to something we bought locally yesterday, but more of that tomorrow.  Here is a little teasing photo . . . 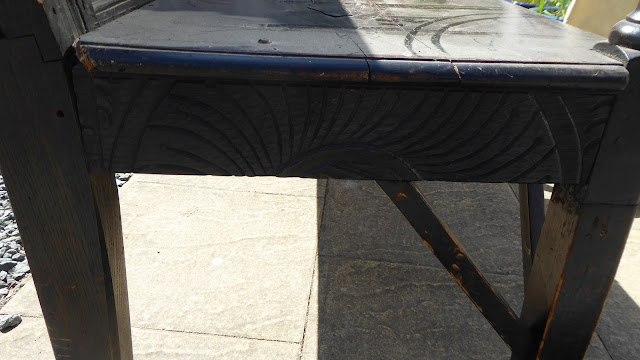