Worth every penny for the smile on his face! 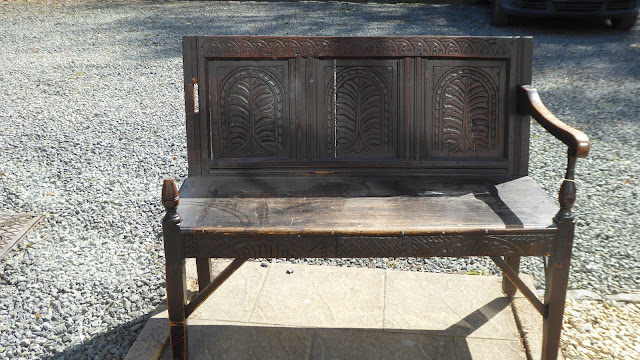 Well, this is the piece of furniture which brought  a huge grin to my husband's face last week.  We popped into a house clearance shop in town.  There was nothing there of interest to us until we spotted this poor unloved settle, though the lack of an arm wasn't obvious until a big box was moved off it.    Not that something like that bothered Keith . . .  It's 17th C, probably Welsh  and has seen better days. It looks like it may have been knocked over as the seat is split, but Keith will mend that and also the split panel on the back.  Apparently the arm was taken off by the landlady's behest so it fitted into a corner . . . I would have thought that would have weakened it, so I'm not taken in by that tale. The strengthening bars between legs and seat are added later too, and the back legs are replacements spliced in - probably to replace ones weakened by woodworm. 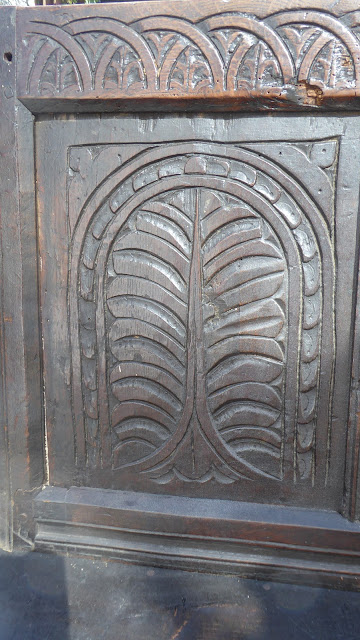 This is the design, rather Palmette in pattern.  Haven't nailed it down yet though to a particular area.  The settle came from a Welsh pub, but not necessarily Welsh of course. . . I love the way the design is wonky showing a slight lack of skill - perhaps someone still learning their trade.   We'll never know for sure. 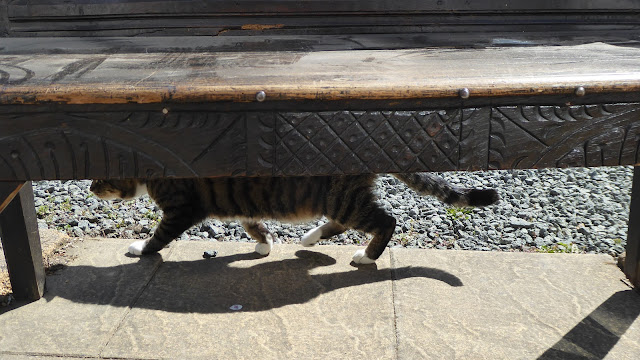 Theo saying, "It's not heavy, really!"  I love the original design along the front.  I have never seen the dot and lattice pattern before.  Again, perhaps repurposed from something else.  The seat looks later, so it's got quite a history! 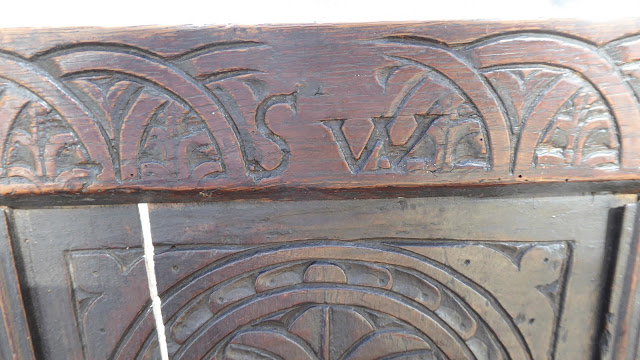 The initials look to be a bit of an afterthought.  It may have been a marriage piece originally.
Anyway, we got it for half the asking price as the shop owner was keen to get rid of last year's stock which had been lingering due to the Lockdowns. As I said, it was worth every penny for the pleasure it has given Keith, who has already drawn out the pattern for the replacement arm and found a suitable piece of wood.