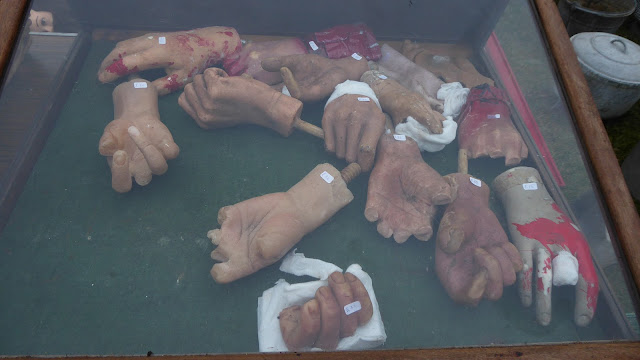 Today it was the August Bank Holiday Fleamarket at Malvern, so of course I got up early and went.  Now we live at Builth, it only takes an hour and a half to get there - from our old home we had to get up at 3.30 a.m. as it took twice as long.
Recent Fairs have been dire - so many "Car Boot" type stalls, house clearance rubbish at silly prices.  However, by the time I was 3 stalls down the first line I could see that it was going to be a good one (a mass spotting of 5 or 6 Magpies (for luck) along the way also boded well!)
The first photo gave me the blog caption for today - I imagine they are mock ups for the film industry.  Different . . . 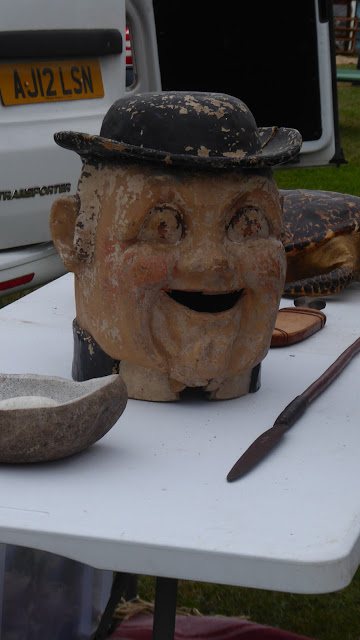 Nearby was this plaster head - a large as life Oliver Hardy I assume. 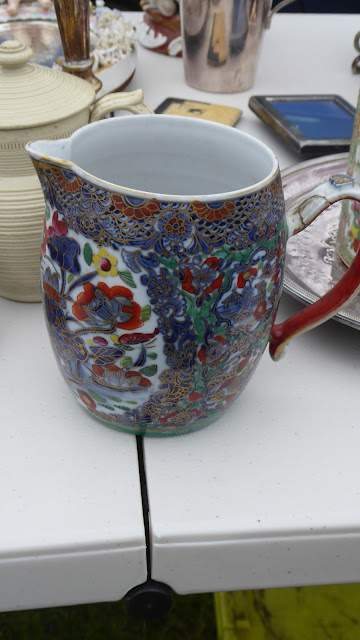 I loved this jug, but at £65 and with the damaged handle, it stayed on the table. 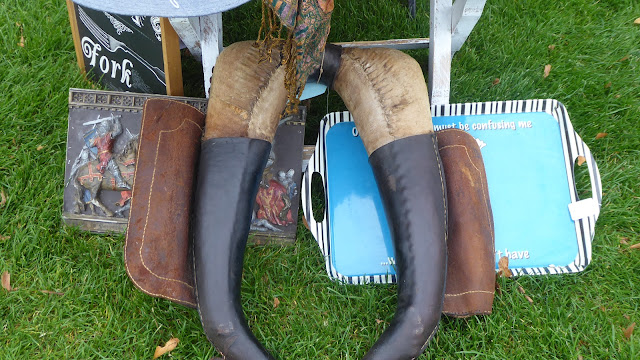 This was described as a horse collar.  Well, if it was I've never seen one quite like THAT before.  I think the linen-clad bit could have been the lining for a donkey collar, and then someone has added the leather "socks" on it but what the brown leather is meant to be doing I don't know. 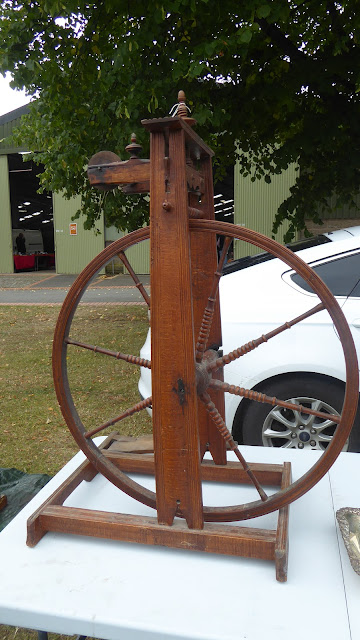 I was very good - I have a "thing" about antique spinning wheels - this was French, with beautiful bobbin turning and dated about 1828 I think, but fortunately I was saved from indulgence by the price - £450!   Just a tad rich pricewise . . . 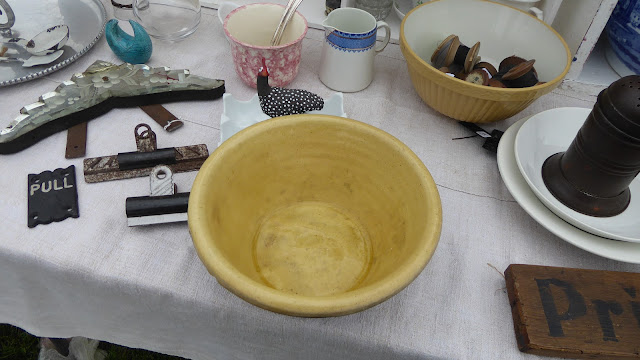 I've been seeing lots of these earthenware steens recently.  I have seen a gigantic one that R had (and which went to a woman who asked him to drill holes in it so she could use it as a planter!)  Silly mare - she had paid top dollar for it, and it wouldn't be frost proof, and drilling holes in it would probably shatter it anyway.  This went the other way and was tiny - about dinner plate size.  I once had a dark brown one this size, which sold well at a Fair.  I wasn't going to part with £40 for this one though. 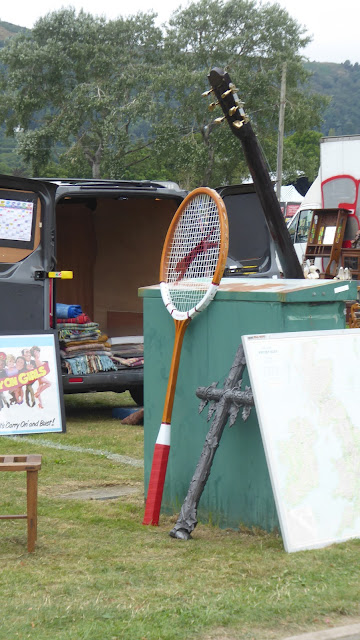 Anyone for Giant Tennis? 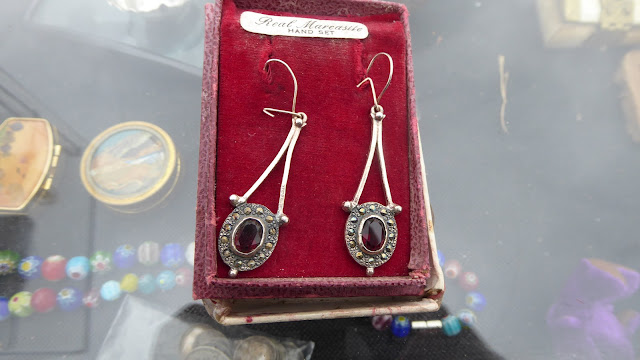 I was tempted to get these for Tam in case they had more value, but at £30 they stayed on the stall and Tam told me they were later than I thought (she knew because of the use of Marcasite around the garnets). 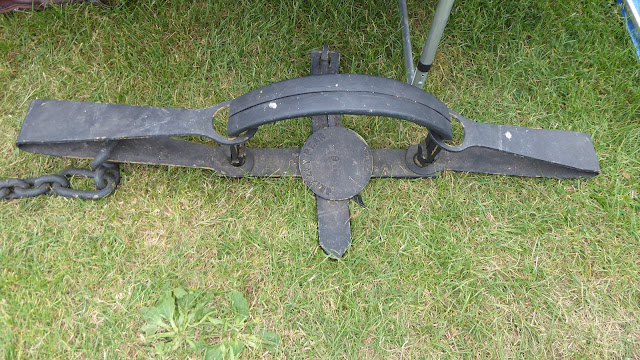 If you are troubled by Grizzly Bears in your neck of the woods, then this trap is the one to help you out! 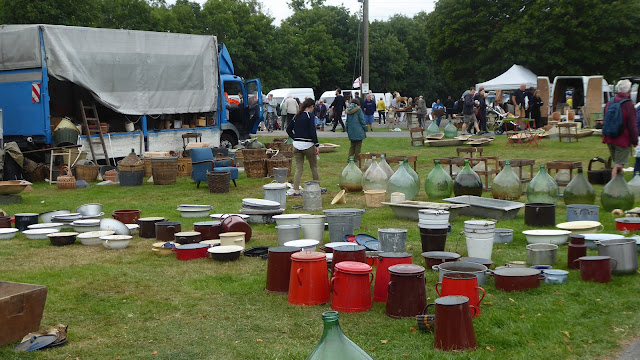 Ivor from East Germany managed to get through Customs (every item itemised and priced) with this lot and more . . . 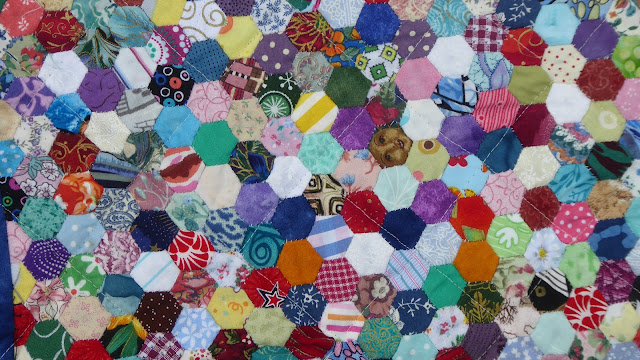 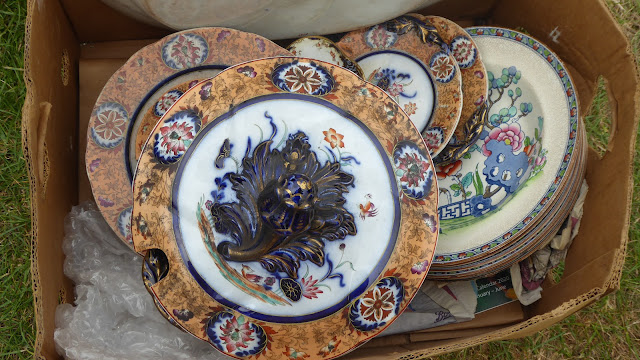 I still have such a soft spot for Over The Top High Victorian China - this tureen was accompanied by a few grubby plates.  When I first started dealing in antiques, these would have been leapt upon . . . 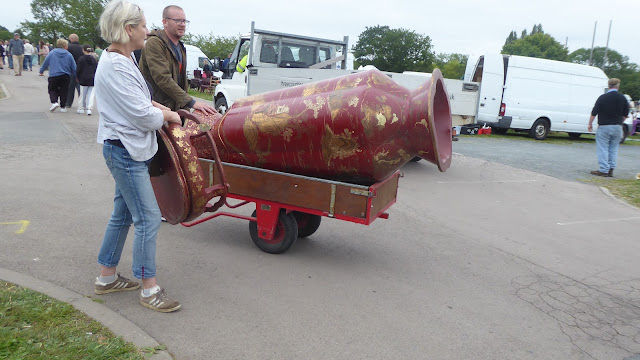 The size of this vase was immense - I wondered if she was going to hide her husband (or her lover!) in it!!  I think the answer was more boring, it was going in a shop. 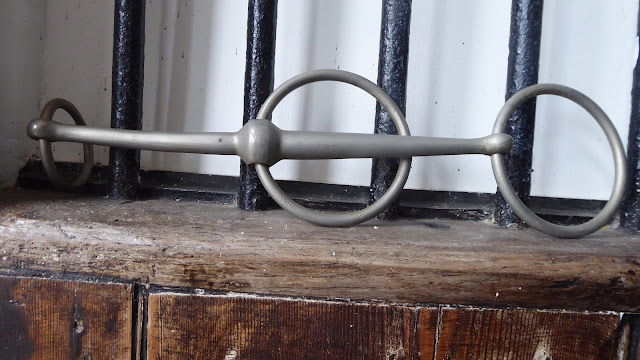 This was my FIND OF THE DAY  - it is an Anti Lugging bit used on trotting horses - the big rings had the headpiece and one rein attached, and the other rein went on the small ring on the left for getting the horse tightly round corners . . .  A VERY rare beast - I've only seen it in a book illustration and then only once. 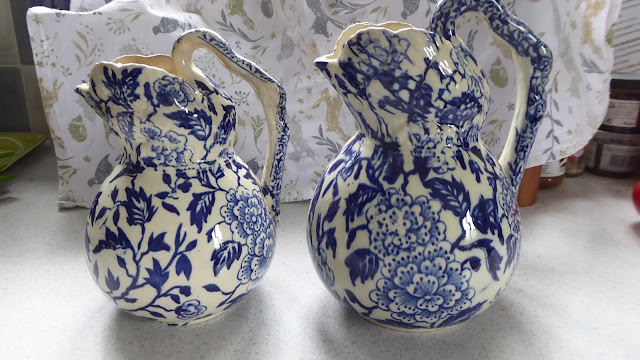 I rather fell in love with these unusual transfer-print Victorian vases. There would probably have been three originally but these were the only two left.  I need to do some research on them to find out the maker and exact date.  Update:  if you look closely you will see these are topped with Swans, whose neck and head form the top half of the handle.  They date to around 1850. Tam doesn't care for them - I love 'em! 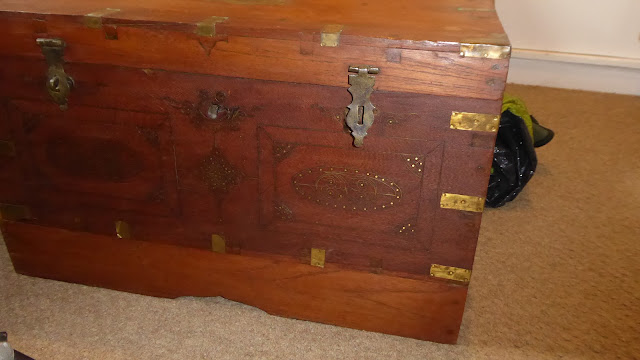 Above and below - an unusual chest, which came at the right price.  With the top rubbed down and polished, and the interior cleaned and polished it still has useful storage . . .  I don't know quite how to name it - a portable alter is the nearest I can get, and there is a candle box on the right, the central part lifts out for the various accoutrements of Mass/Communion.  It's had a new base on it, but hey, it's different and it will speak to someone . . . 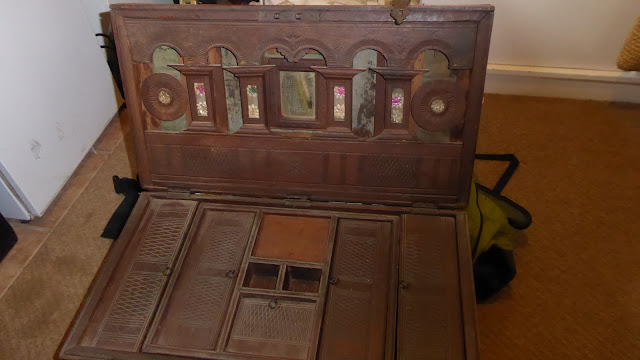 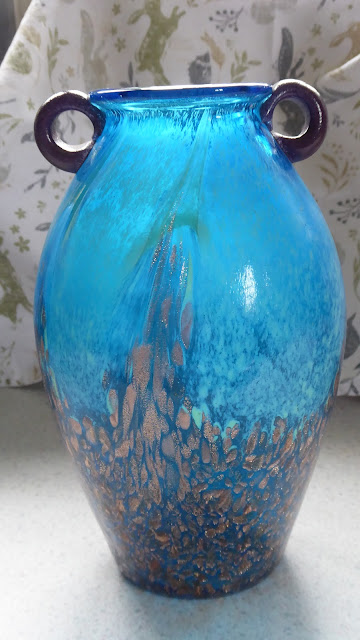 Finally, another good buy - this is a Dale Tiffany blue copper gold adventurine favrile amphora art glass vase. (That's a mouthful!)  American made and worth a good bit more than I paid for it!  It's stock, if we ever do a proper Fair again!  I like art glass and studio pottery.
Anyway, a good day out was had - though I had to crash out on the sofa when we got back and I slept for over an hour.
I hope you all had a good Bank Holiday weekend - what did you get up to?
Posted by Bovey Belle at 12:14