The old lady brandishing a sword

Just updated to say an ABSOLUTELY HUGE WELL DONE TO TEAM GB in the Three Day Eventing.  They put on a superb show and I am SO proud.  I was a bit sniffly, I must confess - I'm so proud of them.  It's been a LONG time since we were at the top of our form in the eventing in the Olympics (1972 - Munich when I think it was an individual Gold - Richard Meade.)  I imagine some bubbly will being opened for the team tonight! 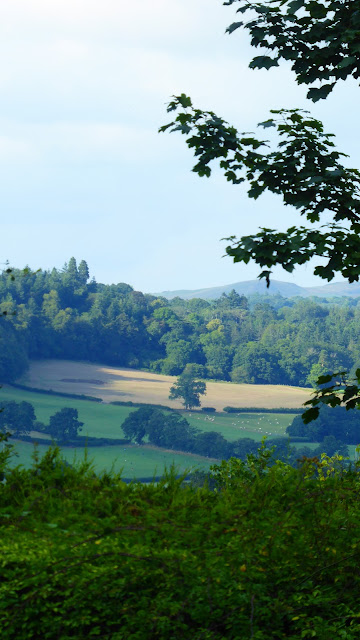 A view across the fields from the Bank in our garden.

I have been sleeping so badly recently and not got one iota of energy to do anything so everything has been on hold - bar my Manx family history research, which has rather taken over my life since I had a breakthrough with a brick wall of over 20 years' duration.  When I was searching before, access to records was limited - the IGI and that was pretty well IT.  Plus I was looking in the wrong parish for K's g.g. grandfather AND a spelling mistake on an entry had been overlooked. "Philp" instead of "Philip".  Suddenly I had a different parish and a different date of birth and now I am elbow deep in Will and BMD records in Ballaugh and so much is on line and searchable now.  Records go back to before the 1600s and I have discovered through K's DNA that his family were on the island when records first began in the early 1400s. 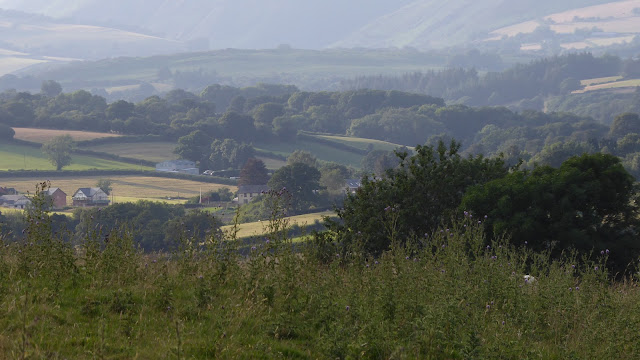 I found this, when searching - hope I haven't included it before! -

"Mr William Cubbon has a pleasant story of an old lady who drove away from the wreck with loaded cart, and brandishing an ancient sword, threatened to give "belltinker" to anyone who attempted to deprive her of the loot."  (Belltinker is to beat or thrash). 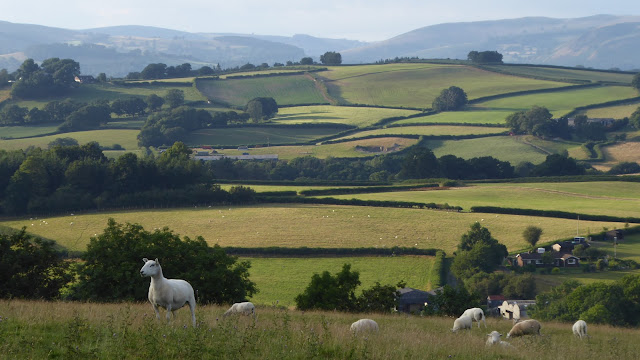 Nothing exciting happening here - still waiting for various tradesmen to make contact (chased the plumber AGAIN this morning).  It would be nice to have functioning sash windows before the next heatwave too. On Saturday Tam and I went to the tiny car boot sale at Llandod.  I spent nothing, she bought a 70s lampshade for the summerhouse.  Then we had a wander round the Spa park.  They had a lovely community orchard when you came out of the trees, and gooseberries and blackcurrants had also been planted for community use.  I saw some wild Sneezewort growing where normally you would find Yarrow.  Apparently it was a Roman Practice camp nearly a couple of thousand years ago.  It had good views to the south. 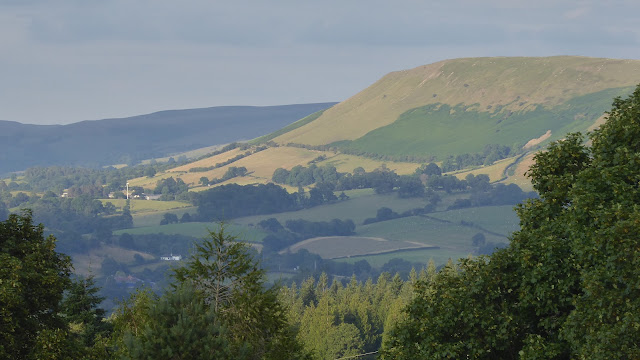 Yesterday we went to the bigger car boot sale at Madley, getting there in time to walk straight in as they opened the gates - despite having the slowest of journeys along the switchback narrow lanes beyond Hay, as some pretentious caravanner didn't want to scratch his precious new caravan, driving in the middle of the one and a bit track lane, and wouldn't pull over so approaching cars could pass.  We reached an impasse at one point. We were very glad when he turned off into a posh caravan park and I wouldn't mind betting he mowed the grass before he set up! 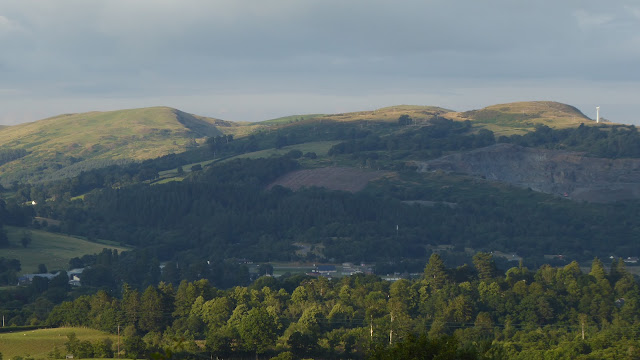 At the boot sale, I picked up two glass Pyrex bowls to replace one smashed recently. I also bought a Snaffles book (1st edition) but think it may be missing one of the illustrative plates, which is a shame.  Tam got some brand new plimsoles (well, that's what I know them as - could do with a pair myself!) and a big bag of Morello cherries.  They are SO good.

So, as a round-up of life at the moment, not much happening, but we will be glad when Keith's hospital appt. happens this month.  Off for a snooze as I am absolutely shattered and good for nothing.

The photos are from a stroll up the hill yesterday evening.