An early morning walk down along the river a few days ago . . . 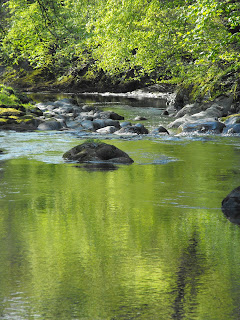 Well, as you know, we are working flat out on redecorating the house at present. So we can really do WITHOUT any more little problems. The plumbing seems to be going wrong all over the house. First the washing machine, which OH had to take to pieces to cure. Then the ground floor toilet won't fill up with water properly and when OH wanted to take THAT to pieces, he found that the chap we'd had here to fit the new Belfast sink in the kitchen a couple of years back had bent the stop cock downstairs so that it couldn't be moved!

We have had a dripping kitchen tap for months, and - being on a roll - OH decided yesterday was the day to sort that out and I was sent in to get 2 washers for it (taking the top half of the kitchen tap with me). I went to the appropriate shop but there was much sucking of teefs and head-shaking so I was guessing, as he searched through the little boxes of "leftovers" on the highest shelf, that I was going to be unlucky with the washers. Then he said the tap is wrecked anyway, as "this bit" is broken and he pointed to what looked like a metal washer (couldn't see it myself, but . . . without the washers, might just as well be). So that meant new taps, and they only did a chrome version of our old-fashioned brass ones bought ten years ago. Price: oh dear, that will be £55 plus VAT. My turn to suck on teefs, and I pointed out I would have to pass this by my OH, as he sent me out for a fiver's worth of washers at most and I can't present him with a bill for over £60 . . . Thinking as I left the shop, OH will bodge this somehow or we will get a much cheaper pair from B&Q . . .

Of course, he bodged it - in that he found he had a spare brass tap (£1 at car boot sale) in his boxes in the stable, and he used the top half of that (with washers) and married it to the bottom half of the original tap. Problem solved. In excess of £60 saved. BUT - and here is the rub - he said it was only the washer which needed replacing on the tap. It wasn't "broken" as they claimed in the shop. Now . . . if he had gone in, I am certain they wouldn't have tried it on with him, because he's a bloke. But because I'm a woman, and apparently ignorant about the inner workings of taps, I am fair game. They don't have the washer, but that's a feeble excuse for new taps, so they say it's broken . . . Grrrrrrrrrrrrrrrr! (And this was a subject we had been discussing only the day before, with regard to women taking cars to garages . . .) Cynical? Moi?