Padding out the family history 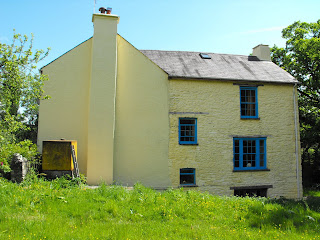 Well, all work and no play make Jack a dull boy indeed. I shan't bang on any more about painting, but the above photo will perhaps show the extent of outside painting we have had to do on the house. This is the view of the house from the paddock. My husband finally got the limewash dilution about right and has been able to improve on the formerly patchy weather-worn look of the walls. It isn't too far different from the colour on the gable walls either. As you can see, we have yet to repaint the oil tank . . .

We are off to Hampshire shortly, and I am meeting up with a new "cousin" of mine next week. I am sure we will have lots to talk about with our family history (I think her research is more widespread than mine).

However, the Moretonhampstead History Society has some wonderful stuff on its website and I printed off the school log of a school in Pound Street (1876 - 1891) recently. In July 1877, "several boys reported for stealing gooseberries. Given reprimand." Discipline was strict: Oct. 1877: "2 boys punished by good thrashing with cane for insubordination." Dec. 1877: "Mass absenteeism as boys collecting holy bushes for Xmas season." (Not sure if they meant to write holly bushes or whether they were called holy bushes . . .) July 1878: "Half boys off school hay-harvesting and picking wortleberries."

There was regularly trouble with the chimneys - the down draught being problematical and causing the school to be closed because they were choking on the smoke. There were problems with absenteeism and truancy - children who lived a good walk away from the school couldn't make it in if there was much snow or rain. Obstreperous parents came and threatened the teacher: "Refused to admit boy as no fees with him. His reputed father, a low rough known as 'the general', threatened to put his fist in my face if I did so again." Truanters were hunted down and punished with a "good thrashing". Parents of persistent offenders were prosecuted for their childrens' non-atttendence.

Parts of it read rather like the problems teachers report in the present day with discipline, but with a lot of mass absenteeism due to helping with the harvest, planting potatoes, picking wortleberries, collecting the holly etc - anything that would help the family and bring in an income . . .
Posted by Bovey Belle at 22:04