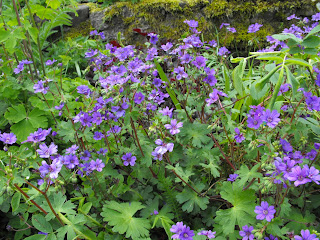 Phew. I think I have just worked out my desperate urge to garden! Emerging from the behind the raspberries and loganberries just now, I found myself covered with bits of detritis (mainly in my hair), dust making me sneeze from where I had been yanking out the most determined weeds, and a back which was complaining bitterly. Going behind the gooseberries was even worse, as I just had no room and my bottom was getting prickled mightily by the gooseberry bushes which shelter in front of a very old stone wall like chicks sheltering beneath a mother hen's wings.

I have cleared up a bit around the intake soft fruit area and will carry on after a cup of tea. The weeds (mainly grass and teasel) are something else and very appreciative of the muck heap mulch I laid down last year.

I also got my runner beans planted out (Scarlet Emperor, which do best here) and some Italian flat beans, which I love and also do well. I am growing on another couple of trays of runner beans, and have Borlotti beans coming out of my ears! I'm about to plant out some more Sweet Peas I started a few weeks back and some Pot Marigolds which need to go in the ground now.

I have had a couple of Casualties - none of the Delphiniums I planted last year have grown again, and the two prettiest Aquilegias - little mound-forming Alpine ones - have snuffed it too. William Guinness black and white Aquilegia) is also M.I.A. presumed dead. Then to make up for it, I have another Aquilegia which is totally new to me (long spurred sort) and I don't know WHERE that came from. Never mind, I have lots of self-sown ones to fill any gaps.

Right, this won't do. Too nice a day to be indoors (though it's back to painting again this afternoon . . .) 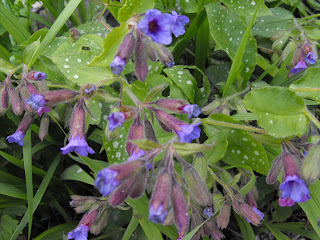 Blue Lungwort in a shady bed by the wall. 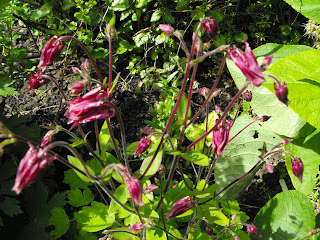 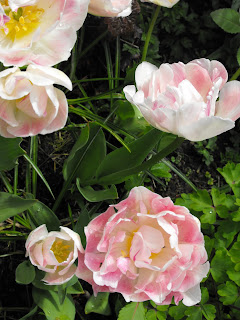 Aren't these tulips gorgeous? I have grown these in tubs but now they have the freedom of the garden. 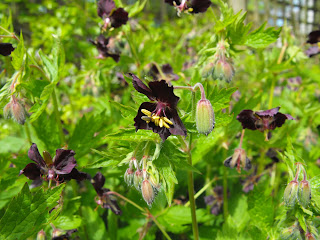 One of my Cranesbills with almost black flowers. These are another of my favourite plants and I plan to add some more variety to my collection this summer, and when we move. 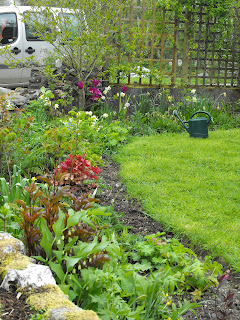 Border with various stuff in - Solomon's Seal nearest.
Posted by Bovey Belle at 03:31