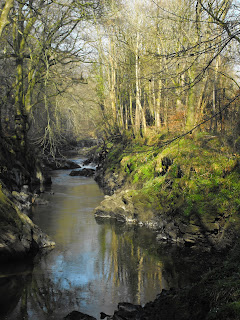 . . . I am aching all over and for two pins would just find a warm place to curl up in and go to sleep! That's what gardening does for you after a winter where you have been just concentrating on staying warm. And being the "gofer" for your husband when it is time to cut wood. Still, we have half a BIG ash tree cut and some of it chopped and already burned as we are low on firewood, having had to light the wood burner just after breakfast most days.

I have been working in the paddock, in the soft fruit area which has raspberry canes, gooseberry bushes, a big loganberry, strawberries,a boysenberry, blackcurrants and redcurrants, and a wee blueberry bush which doesn't know whether it wants to live or die. Anyway, one patch of raspberries is pretty well dug over, and partly-mulched/fed with muck heap. I was working around the loganberry today, which has put on a lot of growth and also managed to tip-root three of its overgrown canes, so I have potted those up to sell on at a spring car boot sale. I have some blackcurrants and gooseberries to do the same with, when I reach them.

As the sun has shone over the weekend, I was out there yesterday too, with the help of the cats - mainly Lucky, but also Gypsy for a while, Banshee, Lucy and today Misery Guts (the latest stray - the grey tabby) came to join me, and also came down the hill to cast an eye over the logging proceedings. Very sensibly, as she noticed large chunks of tree rolling across the lane, she went uphill and behind a bit of netting, where she felt safe.

Progress has been made, though it is very difficult to weed when a little elderly cat thinks you are out there merely for her comfort. First of all Lucky sat on my boots, then on my lap (when I sat on my kneeling mat) and when I was on my hands and knees, she decided she would jump up on my back and make a bed of me!!! Today she quickly appropriated my kneeling mat again, so I had to go and wrap a chair cushion in a bin bag, and use that instead. 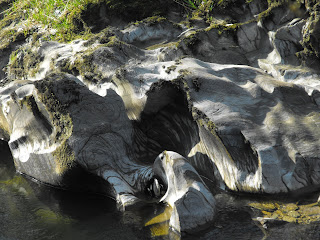 I had intended to go for a walk, down by the river, but I was soon aching like an achey thing and abandoned that idea. However, I have put up a couple of photos of a river walk in the 3rd week of March last year, just to remind myself that spring WILL arrive. 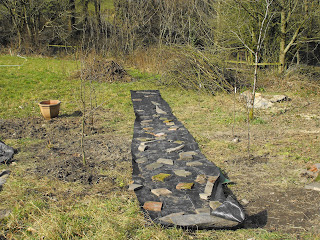 Here is the intake area when I was first getting started - path membrane laid out and some Lidl fruit trees planted beside it. 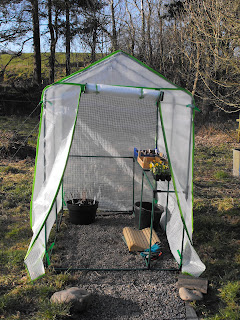 The thrill of a greenhouse big enough to stand up in - the first thing I did was to take a deckchair and sit inside it to read the Hope Bourne book (Exmoor) which had just arrived. . . 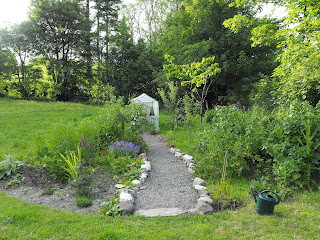 This was it last summer, with everything nicely established. Soft fruit to the right and herb garden and overflow flower garden on the left. It was worth all the effort, though my OH thought I was MAD. 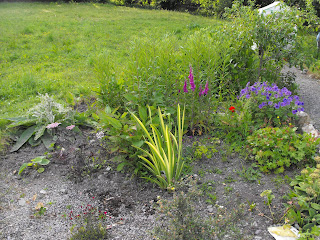