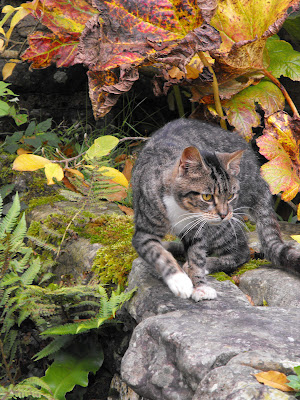 This week Theo is starting to get a bit more adventurous and when the front door is open he will go out and explore the garden.  His cold is drying up (will the carpet ever recover?!) and he is putting on weight and getting to know the other cats.  He is tolerated by them all except the boys, who look on him with abject horror, cross themselves and run away!  Hopefully once he is neutered, they will all settle down together as I dare say they see him as his father's son right now - the Young Pretender.  His father is almost certainly the stray who tries to steal whatever food is put out for Miffy and Amber, but then I suppose he thinks I am putting it out for him . . . 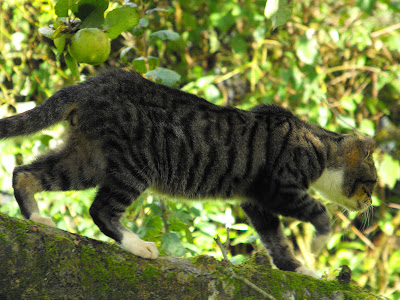 Here is is in the Bramley apple tree, having seen Alfie up there and realized that it is possible for cats to climb.  You can see he has no back end yet but now he's wormed, at least I am feeding him and not the worms. 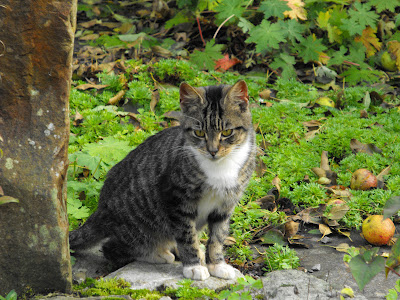 He has the most beautiful sherbert-lemon eyes!  And a teensy miow.  And a taste for the better things in life - bacon rinds, little bits of cheese, cat food in gravy, chicken leftovers.  He has us trained! 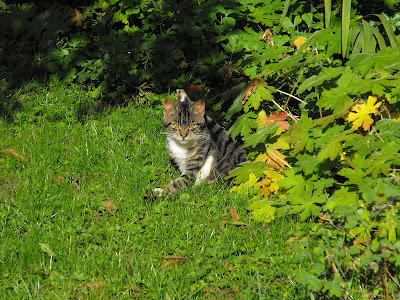 Sunbathing is nice too.  Here he is having a wash-and-brush-up or - as my dad was wont to call it - "playing his eukele"!!!