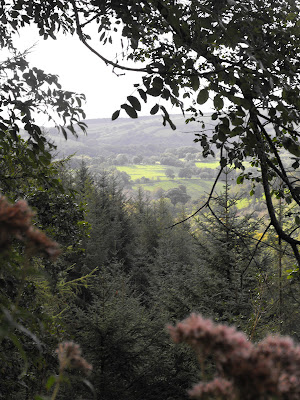 What you call a tourist in the West Country depends on where you live.  In Devon they are Grockles (and in Dorset and parts of Hampshire too, and Somerset too I believe) but go across the Cornish border and they become Emmet.  An emmet (in Hampshire) is a red ant.  Apparently the mass movements of tourists are not unalike those of ants, hence the term.  My good friend J has found me this: However the use of 'emmet' to mean ants is actually from the Cornish dialect of English and is derived from the Old English word �mete from which the modern English word ant, is also derived (compare Modern German Ameise [ant]).

The little guide I bought in Hay-on-Wye had a few interesting dialect words.  I'd never heard of "ANCHOR" used in any other than a maritime sense, but apparently it is to dawdle or potter . . .

A CHATTERBAG is a gossip. Love that word!

PURDLE is to cause to fall over or spin round - to PURDLE ALONG is to go at a good rate.

SCAMMISH is clumsy or awkward.

TOMMY is food, especially when taken to work, or a loaf of bread.

A WANT is a mole.  Thus a WANT-HEAP is a mole-hole; and a WANT-WRIGGLE is a mole trackway.

Just a few words for you to enjoy.