Another busy day.  I've managed another poem over on Dust in the Nettles and will be back later with more photos from Lincoln.

Ruskin said of Lincoln Cathedral:  "I have always held . . . that the Cathedral of Lincoln is out and out the most precious piece of architecture in the British Isles and roughly speaking worth any two other cathedrals we have." 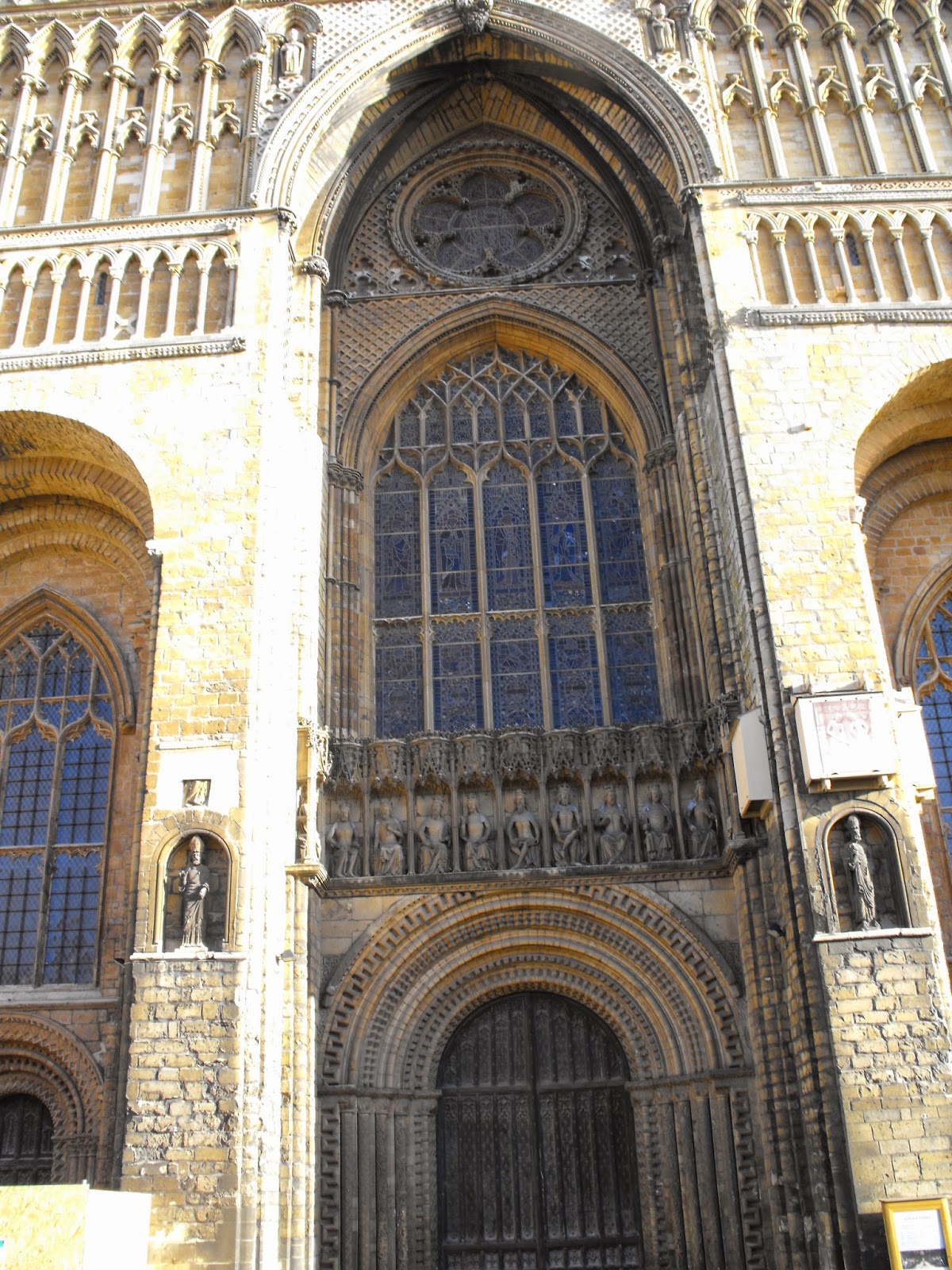 The stunning West Front of the cathedral.  Building work began here in 1072, when William the Conquerer told Bishop Remigius to build him a Cathedral to keep his castle company.  Unfortunately after 20 years of building, there was a fire which destroyed the roof.  Worse was to come in 1185 when an earthquake split the cathedral from top to bottom.  Fortunately the West Front survived. 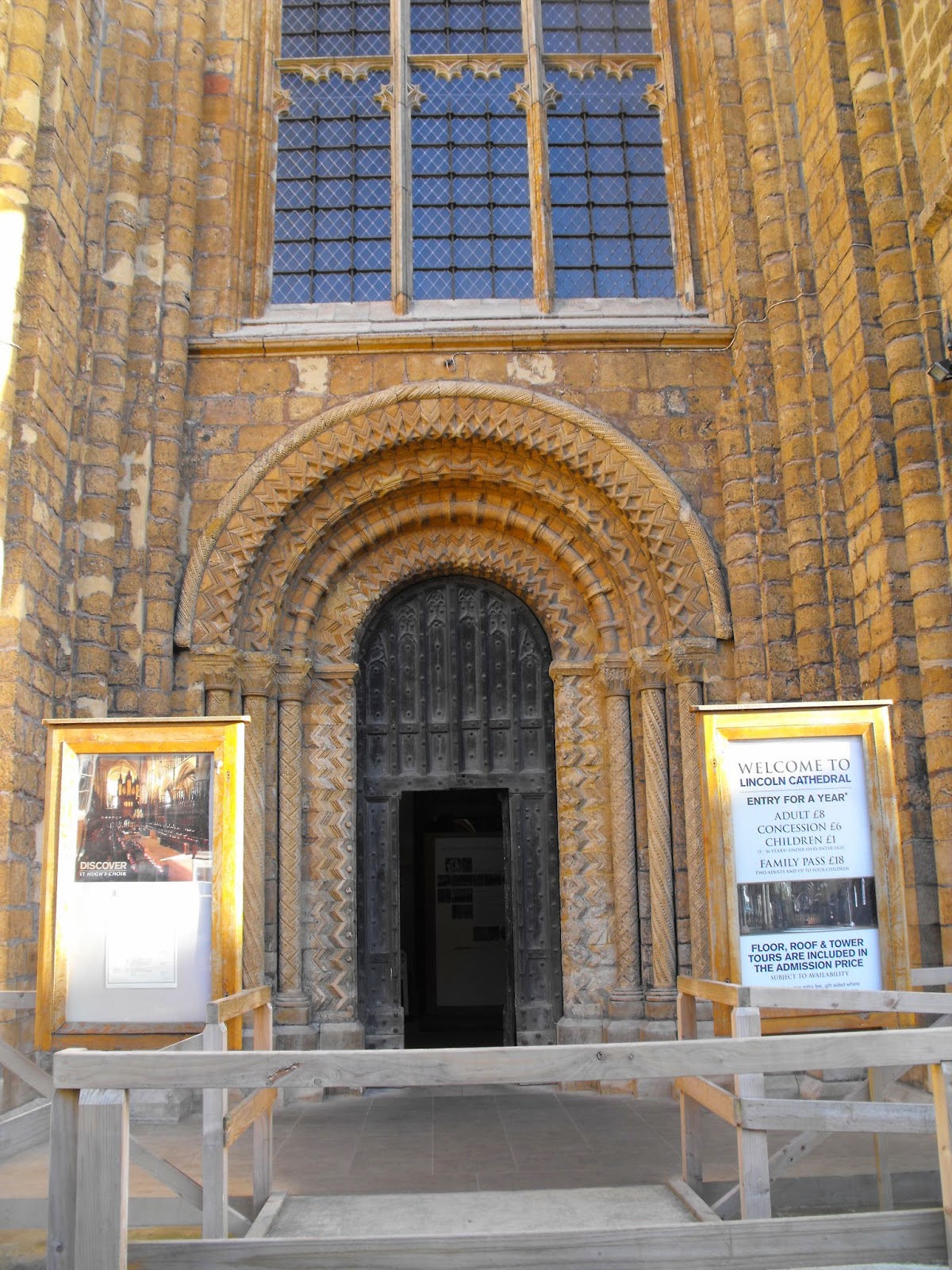 Whilst there are traditionally Norman chevron patterns around the doorway, there is a nod to late Anglo Saxon designs. 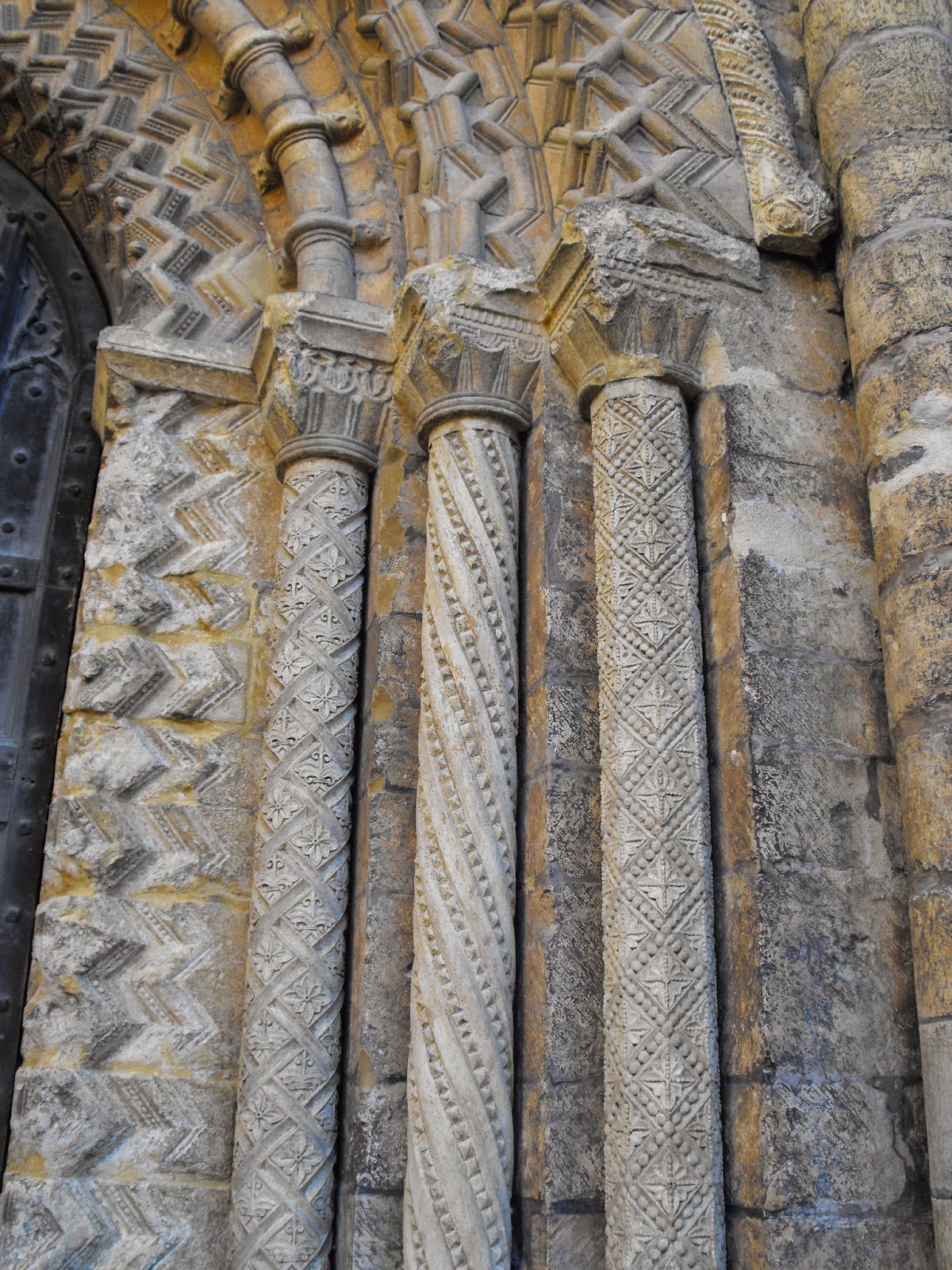 This shows particularly in the figures in the interlace below. 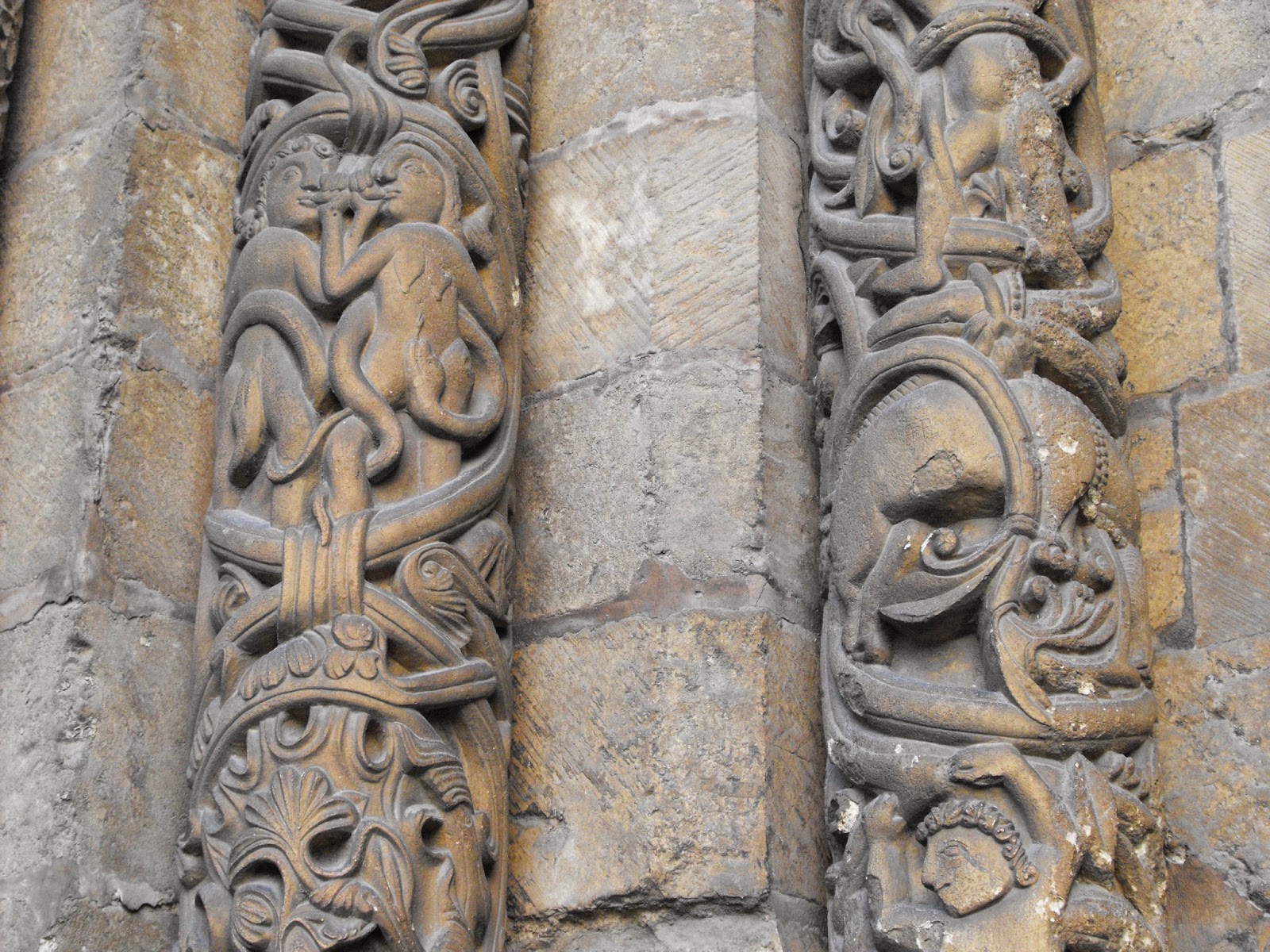 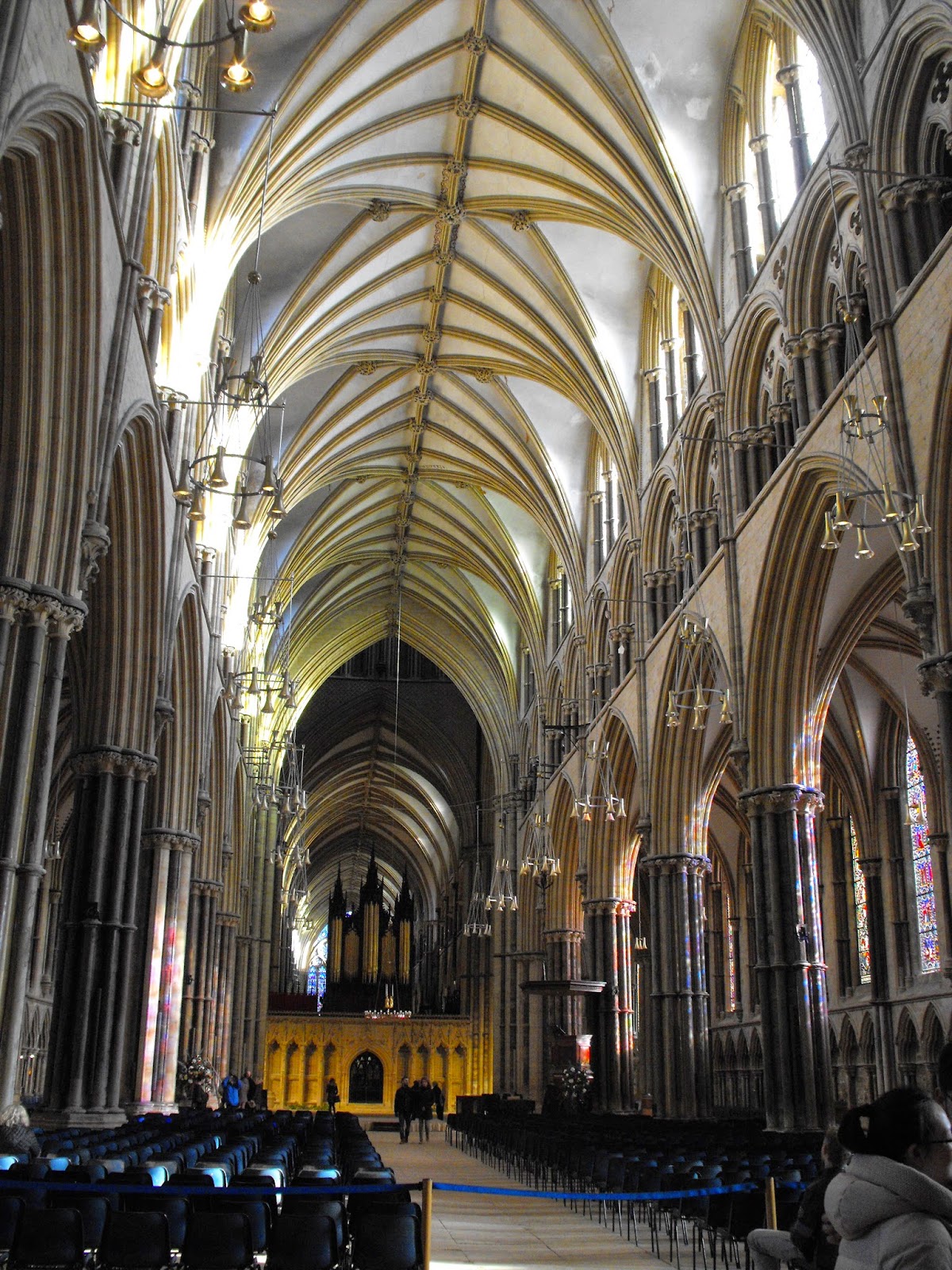 Inside your eyes are raised to the soaring arches. 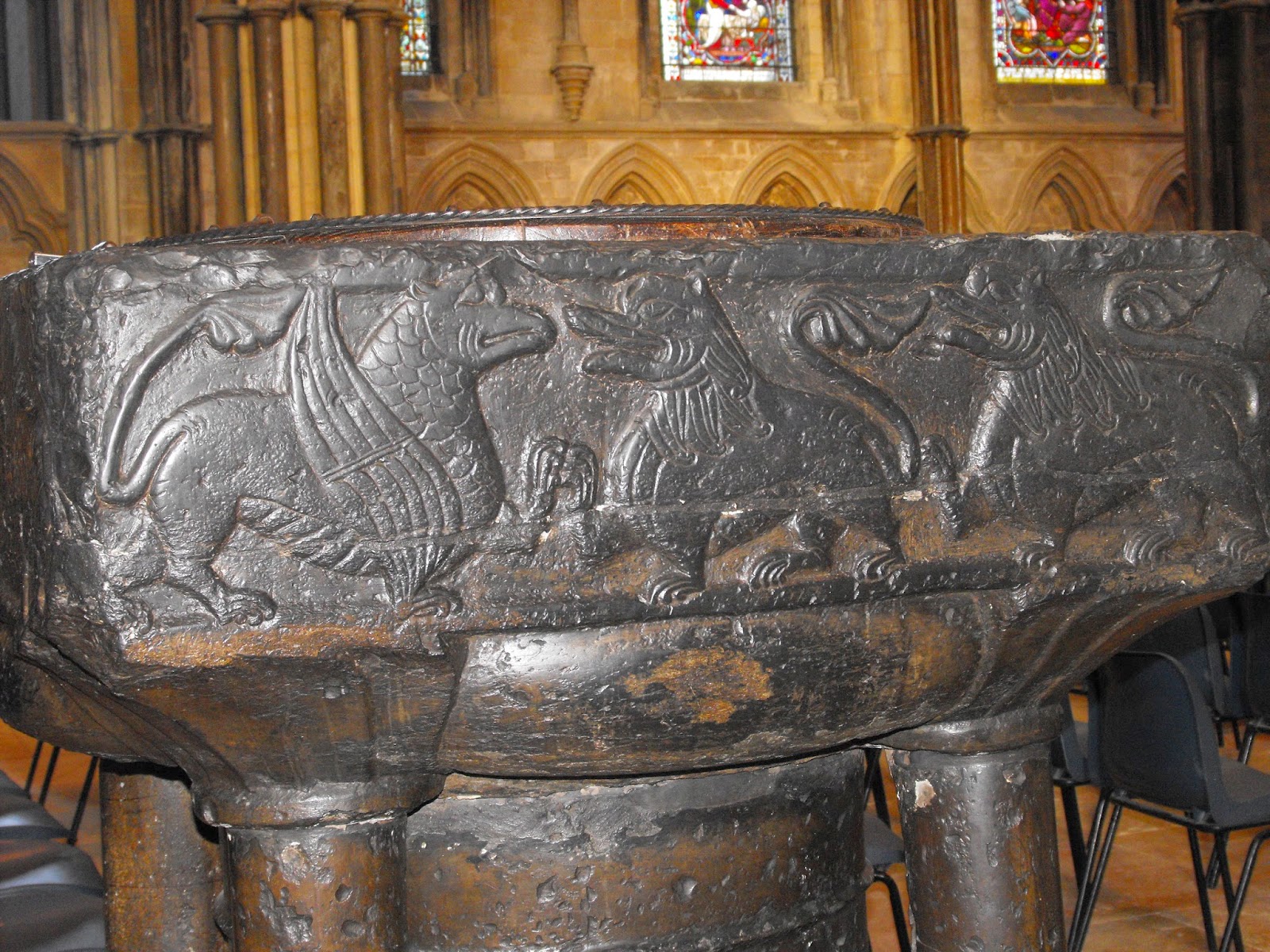 The black marble font (ordered from a quarry in Belgium at great expense) has Beasties which show the battle between good and evil.  Evil appears to be a dragon, with wings, scales and a belly like a Crocodile!  Good is represented by what could be a wolf-like animal, but it has curly locks on its neck so we will assume it to be a lion.  Not St Mark's lion, however, as that has wings . . .  Some slightly different "baddies" being sorted out on another face. 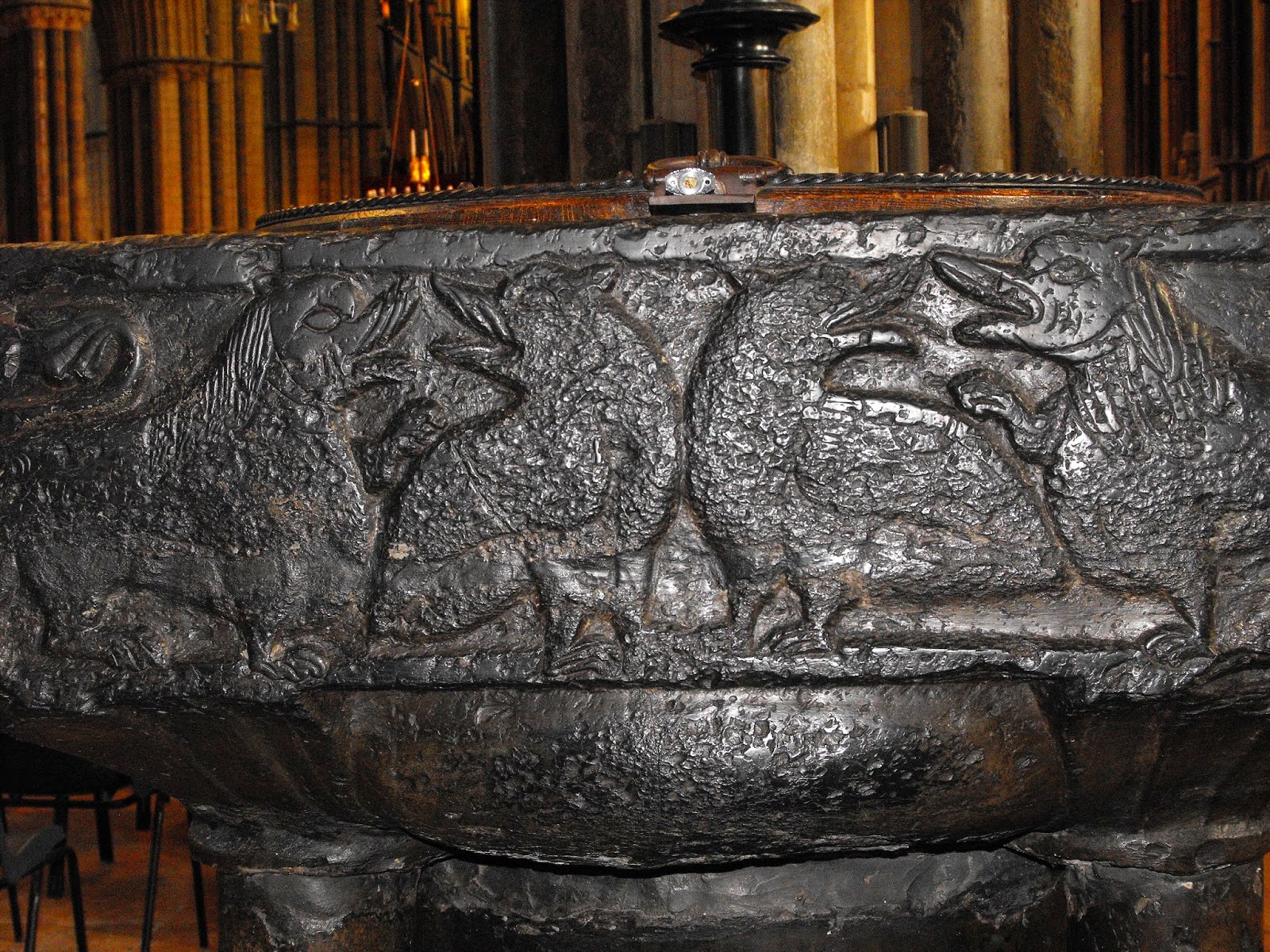 Below,  one of two superb 'Rose' windows.  The Dean's Window has its original panels, and faces North . . . he was lower down in the pecking order . . .  People believed that it looked north 'to keep out the dark deeds of the Devil.' 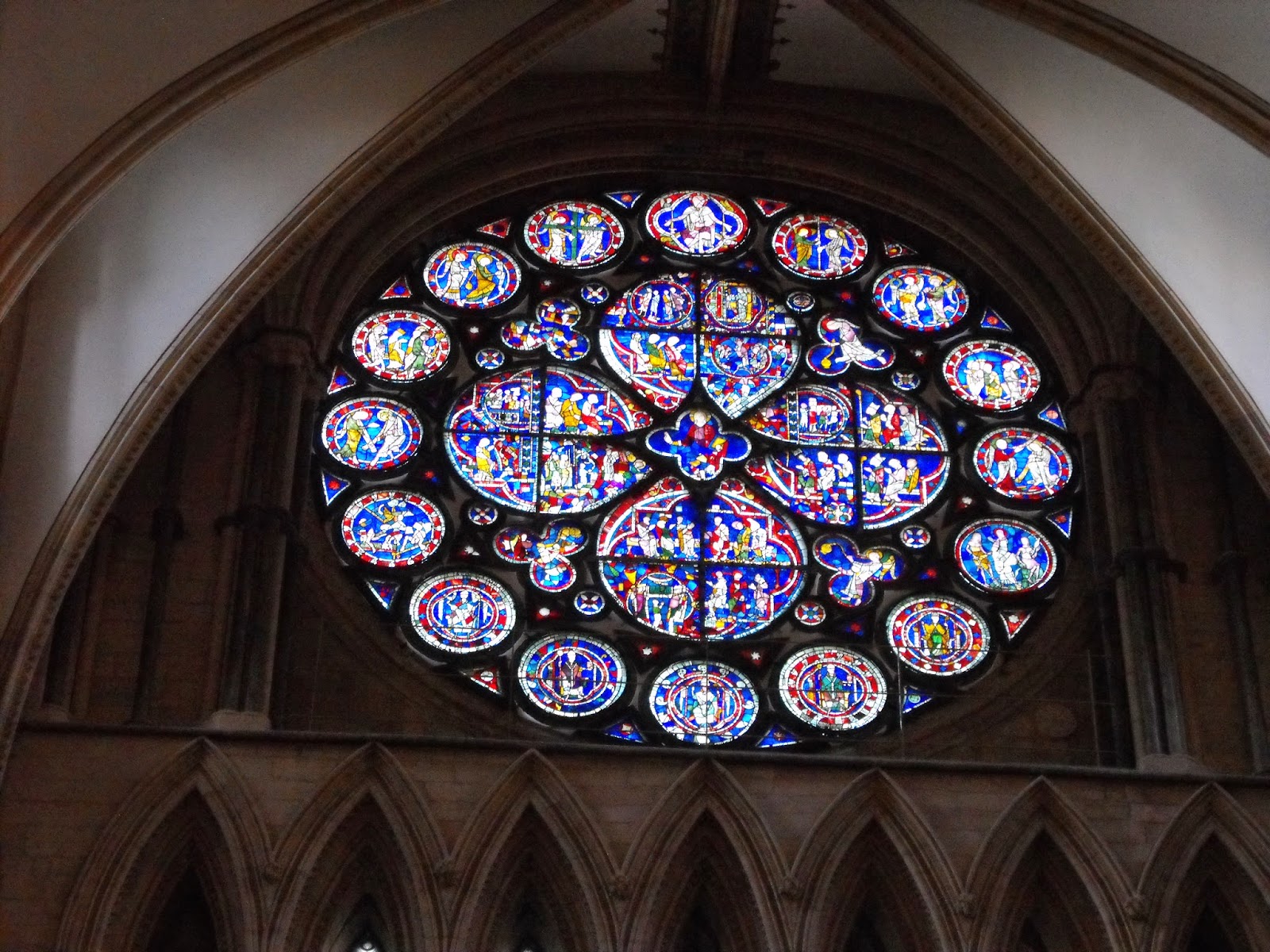 Whilst the Bishop had his stunning window facing South . . .  This faces the Dean's Window across the transept, and worshippers believed that it 'looked towards the sun to welcome in God's light and love.'  It was fitted around 1330, and the stone tracery looks like lace - showing the masons' craftsmanship. 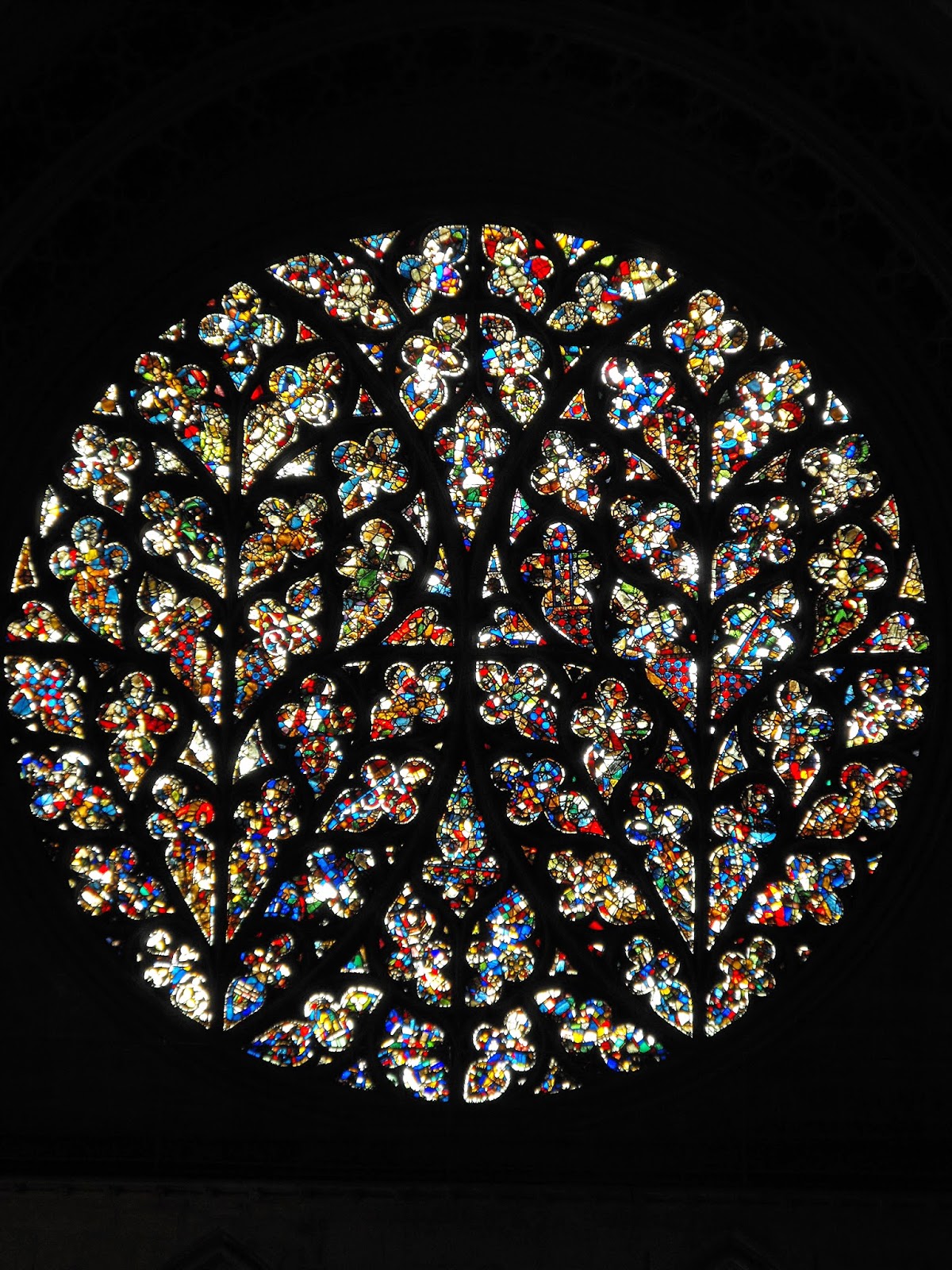 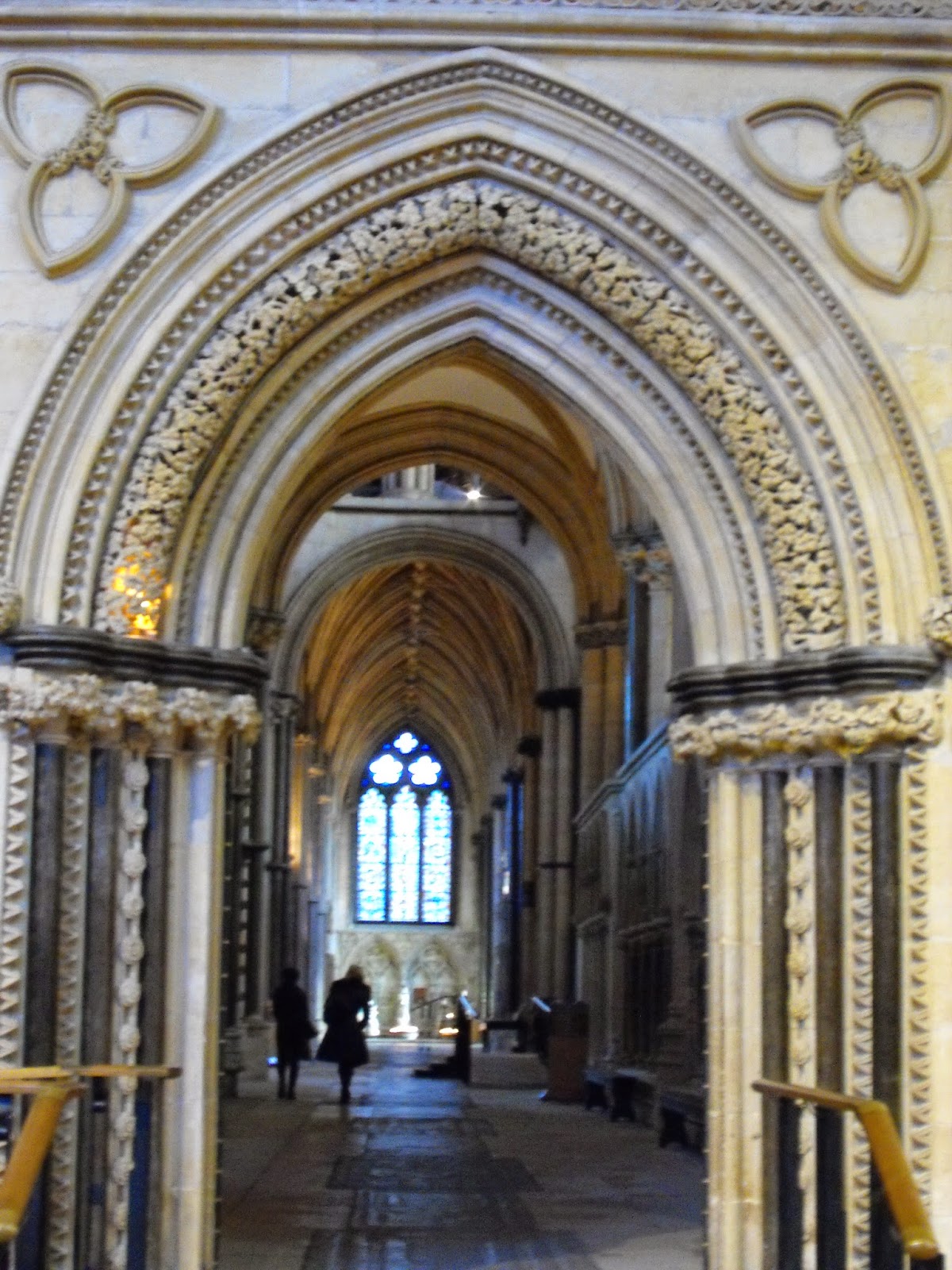 The doorway at the right end of the Choir Screen. 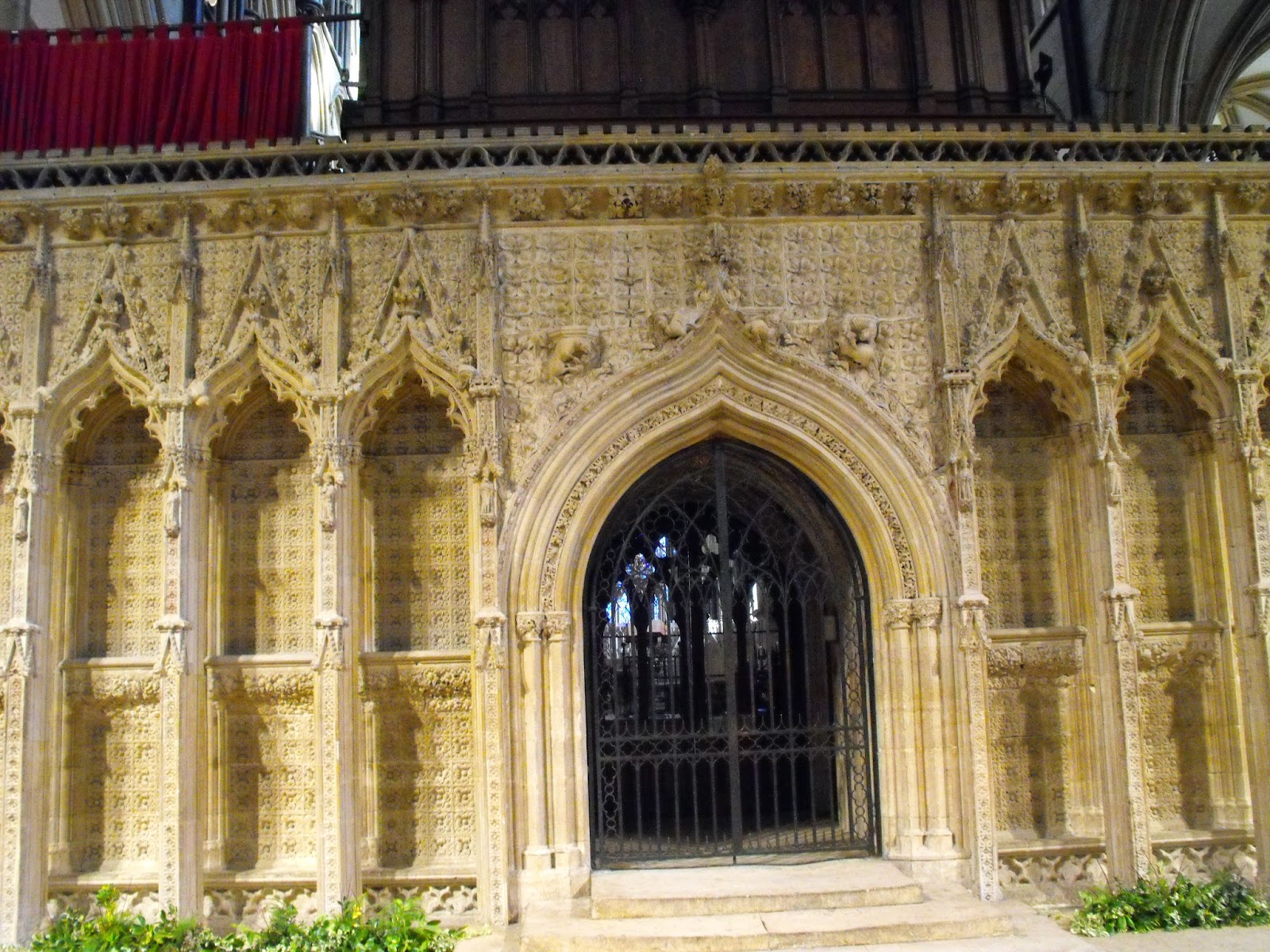 The amazing Choir Screen with its intricate carvings (more photos of it in the next post). 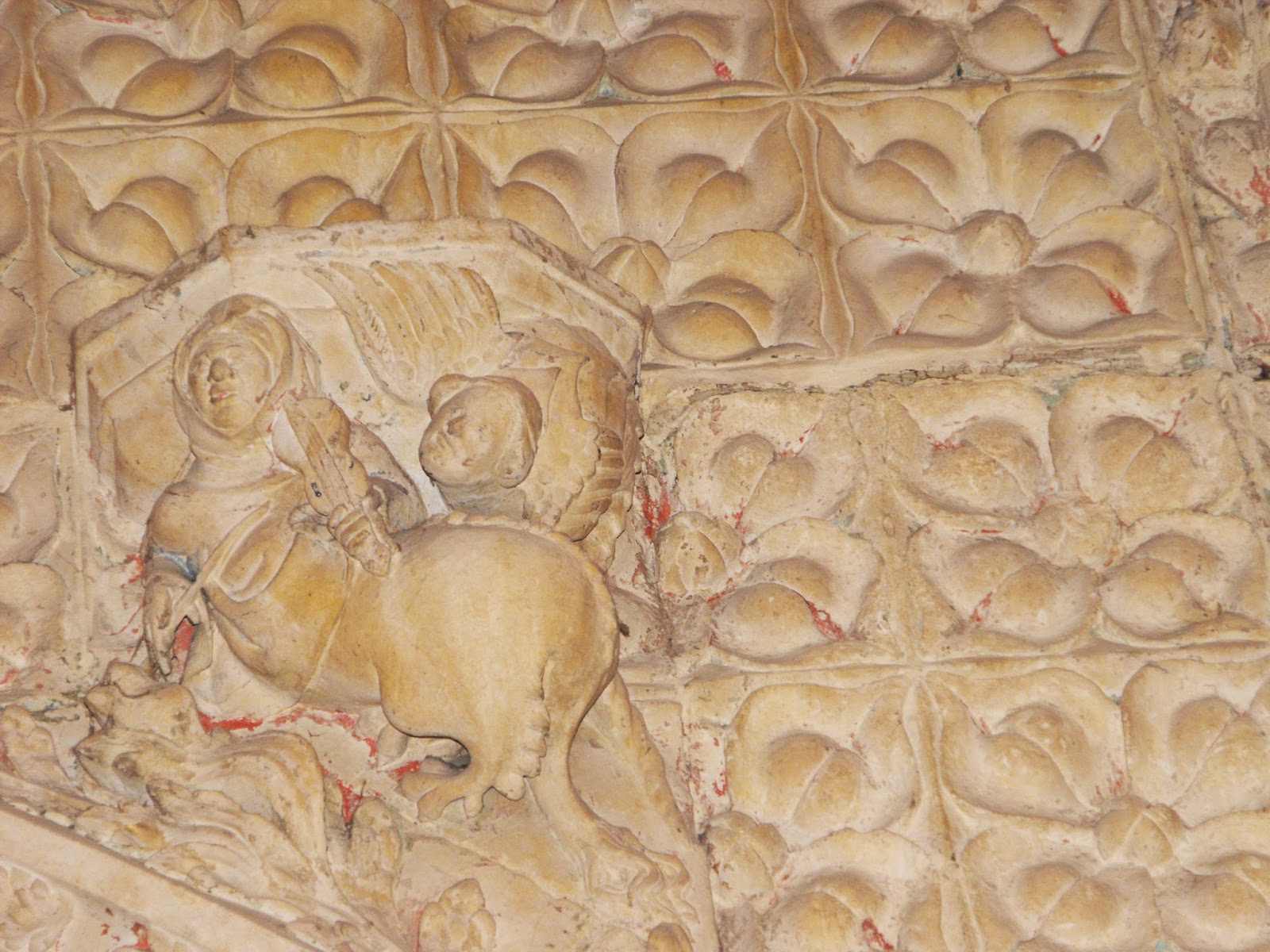 A rather weird cross between a person and a beastie, playing a violin . . .  you can just make out traces of the original paint - red, and a little blue around his left elbow. 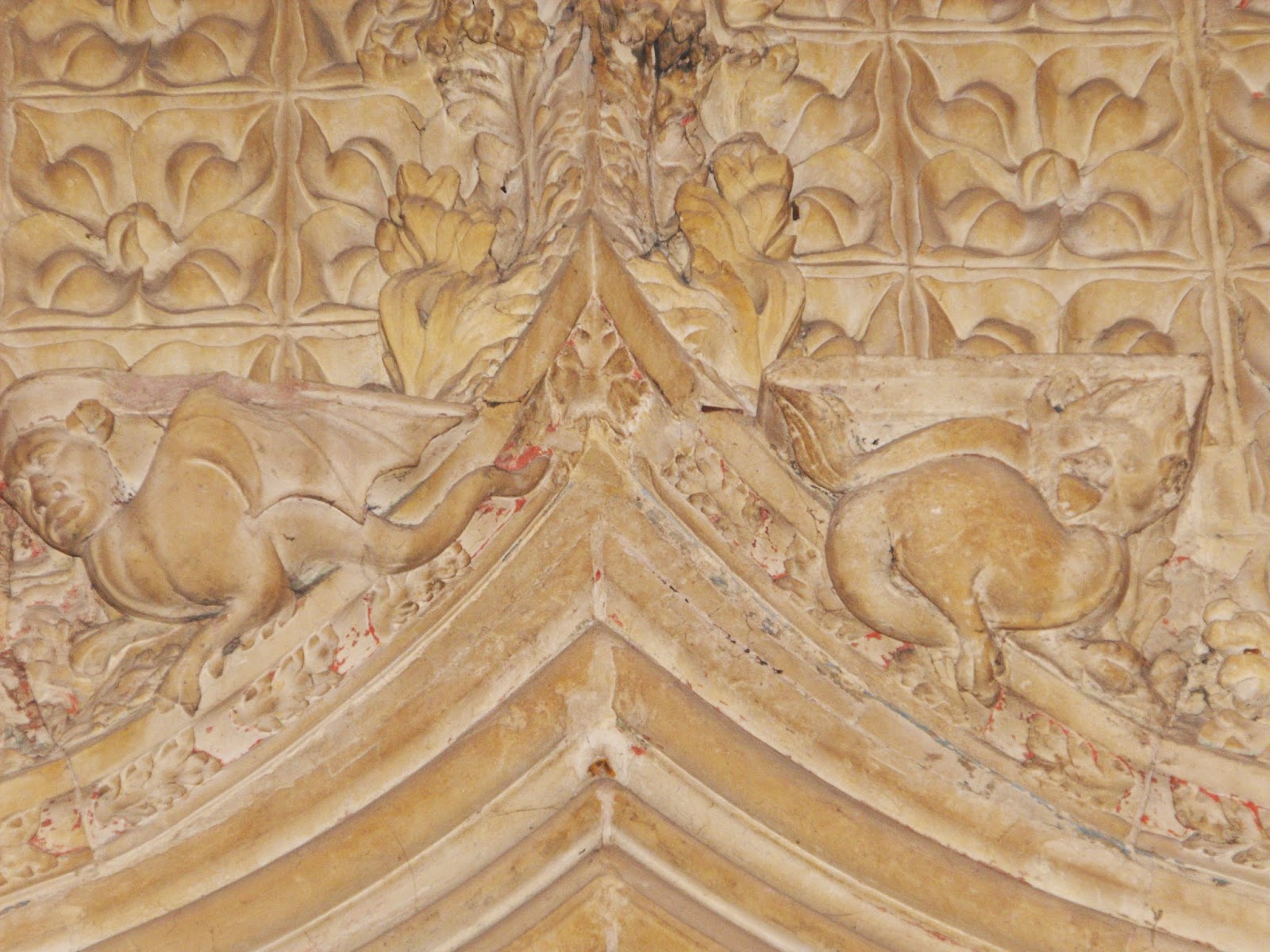 Possibly a Manticore (to the left) and his partner the other side of the ogee top of the doorway. 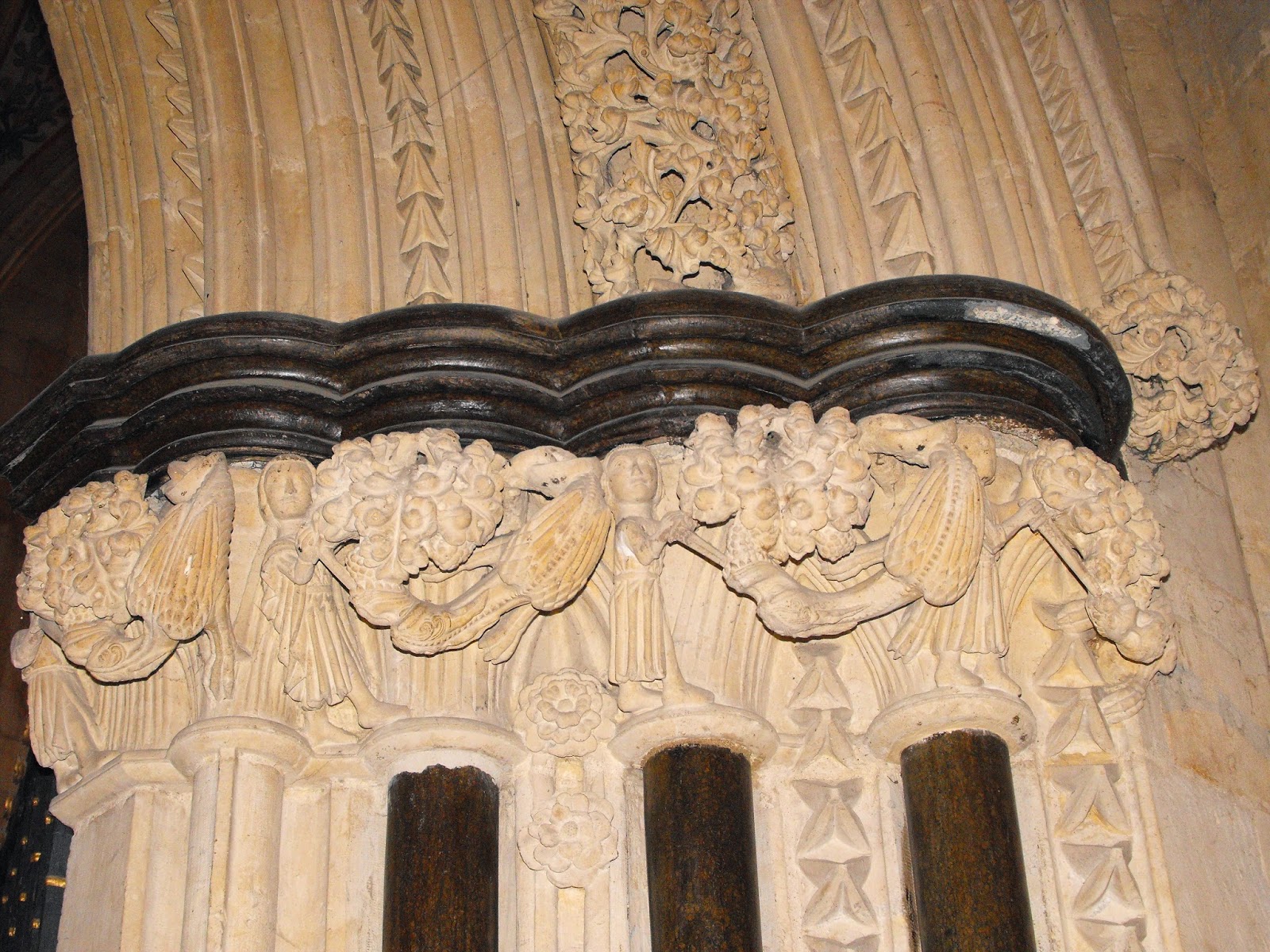 If you look closely, you will see some naughty dragons coming out of hiding in the vine, to scoff the bunches of grapes.  Unfortunately they have been noticed and are being stabbed. . . 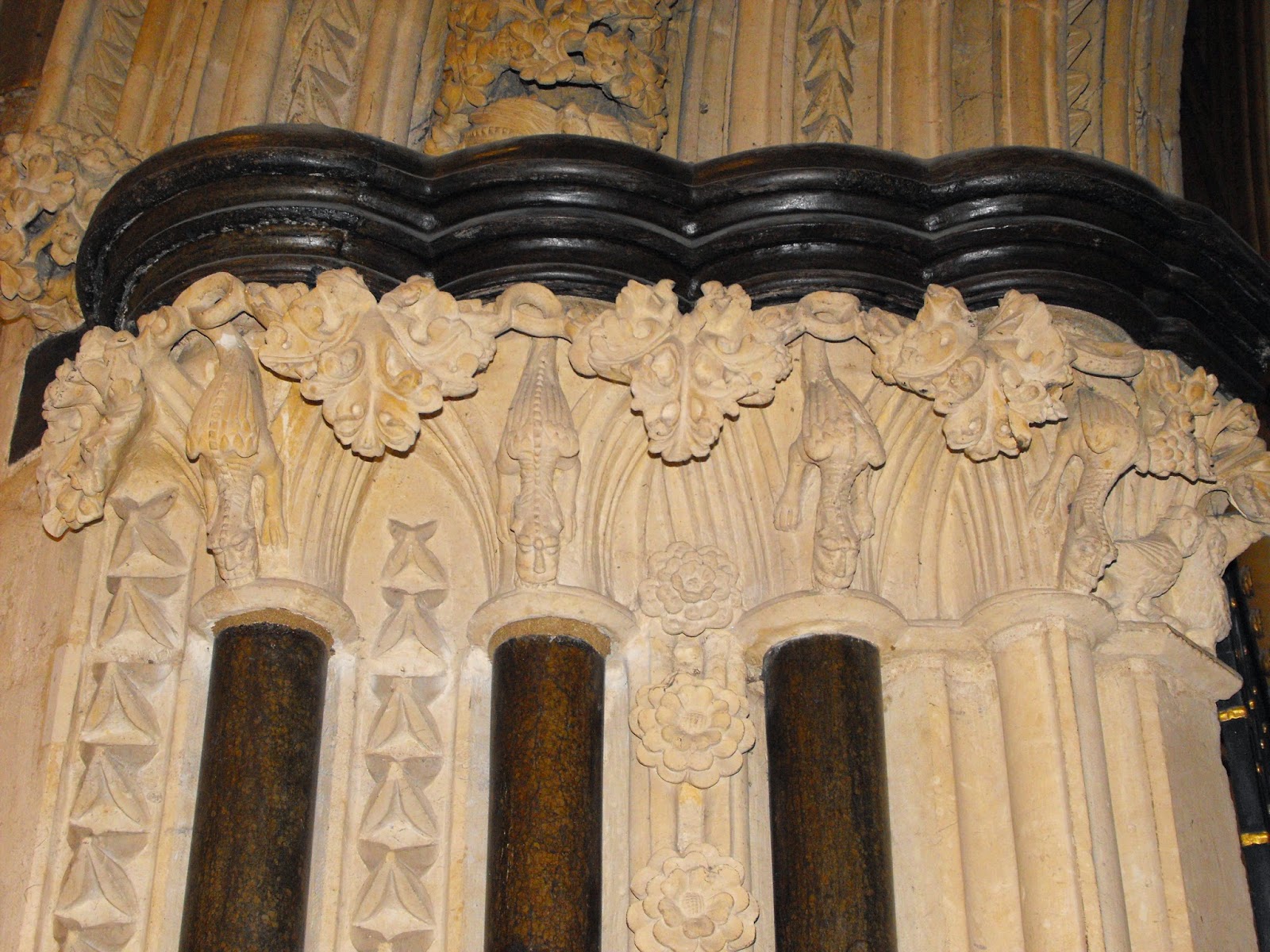 Here they are, dead and skinned and hung up for all to see (Imagery was widely understood by the poor people who attended church, but were illiterate.)  You can also see the beautiful rose carvings which were symbols of the Virgin Mary . . . 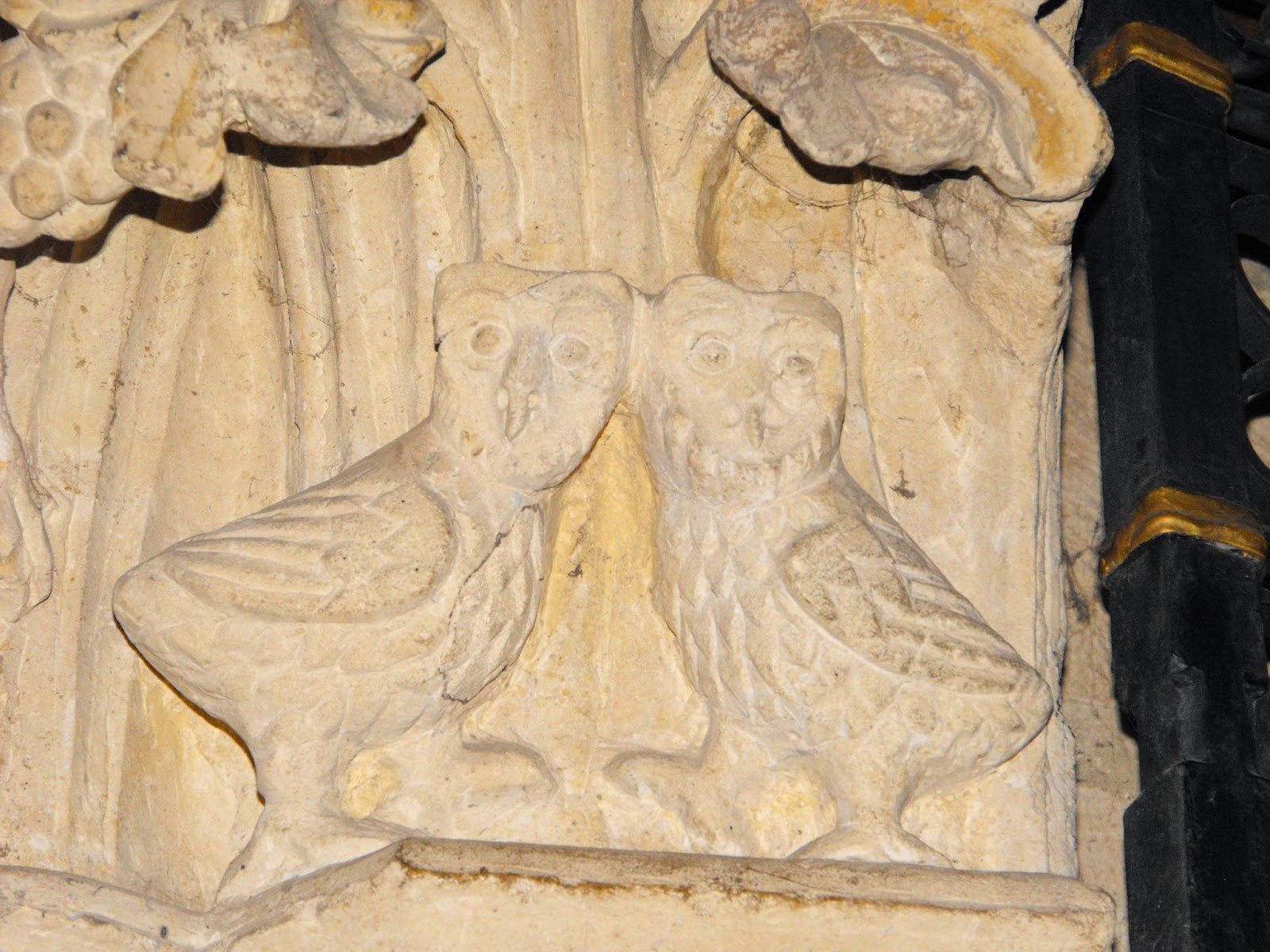 These were just my favourite carvings in the entire cathedral and I am sure they are Barn Owls.  They represent the dark and ignorance.  Or so says the guide book.  Our guide (for we had a guided tour) also mentioned that one visitor from South Africa had mentioned them eating souls.  That led me to think about Mary Webb's Sin Eaters (in 'Precious Bane').  In the Scriptures, however, the owl is associated with desolation. In the Bible, the Owl was one of the birds which was mentioned as unclean.

More tomorrow (or when I have time over the weekend).
Posted by Bovey Belle at 23:56