Haworth and the Brontes 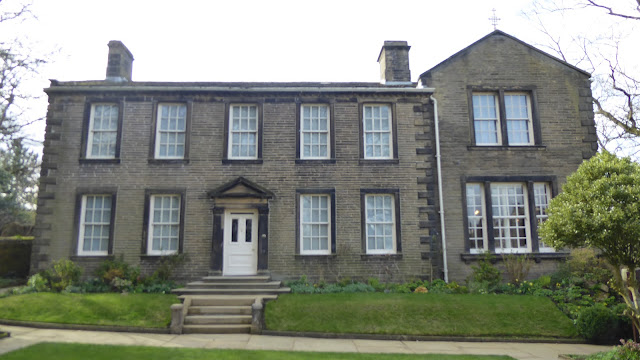 It is many - MANY - years since I was last here, the Bronte Parsonage Museum at Haworth in Yorkshire.  In fact, it was 1987 when I last visited, with our eldest daughter in a push-chair . . .  You may imagine I didn't have anything like long enough to wander round, especially as ma-in-law was sat in the car in the car park, thinking the whole visit was a waste of money, I don't doubt!  She had no literary bone in her body!

This time we had Tam's partner in tow - he also had no interest in the Brontes, so went for a walk, and had been told that I had no intention of sprinting round the Museum THIS time! 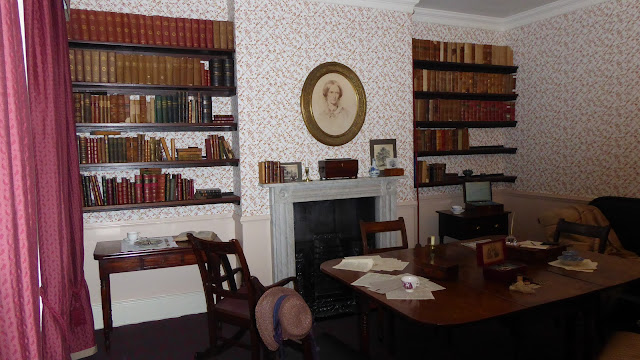 Above and below: the Dining Room, where the Bronte sisters did much of their writing.   From their juvenilia writing of tiny books, barely legible without a magnifying glass, their talent blossomed into such well-known and treasured classics as "Wuthering Heights",  "Jane Eyre" and "Agnes Grey".  They would read extracts from their work to each other as they walked around the table in late evening. 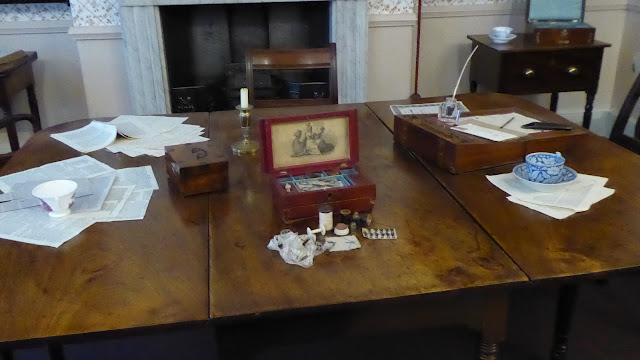 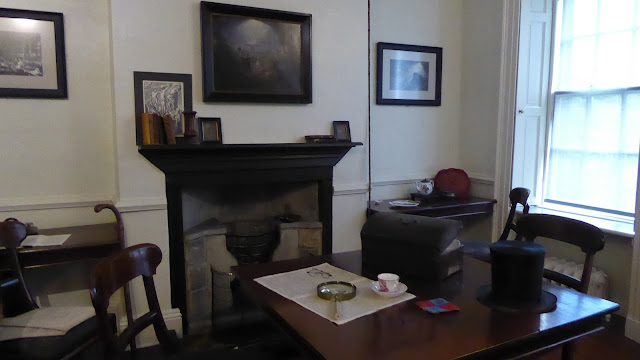 Mr Bronte's study.  We must imagine him as a gaunt upright man, who chose to have no frills or fripperies and even in old age, would sit upright in a straight-backed chair, with no cushion for comfort. 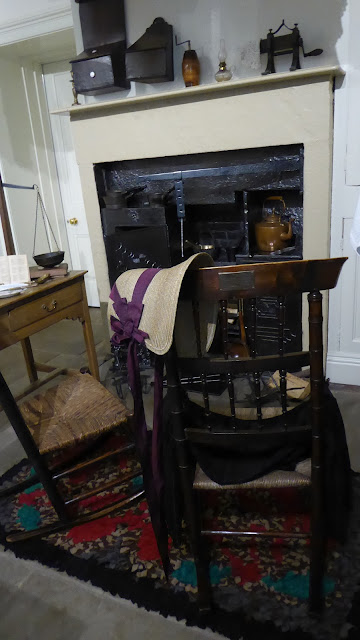 The kitchen hearth, which the girls knew well as they helped Tabby Ackroyd, the Parsonage servant, to carry out chores.  A comforting place to be when the chill winds of winter wuthered around the house. Below - kitchen from a different angle. 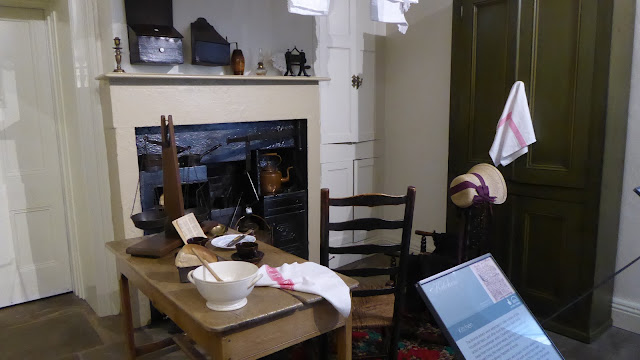 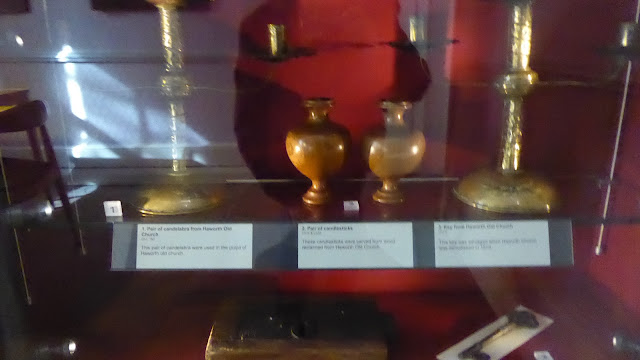 I think I can just about read this: a pair of candelabra from Haworth Old Church and centre, pair of candlesticks from there too. 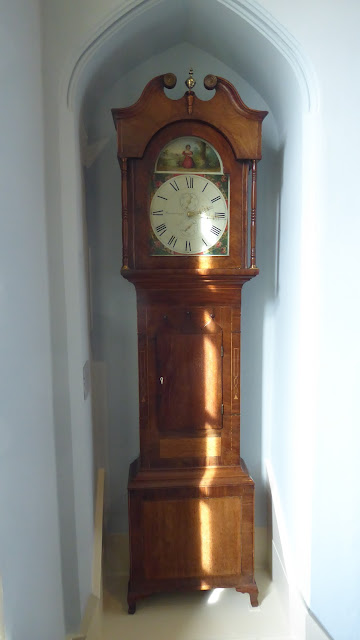 Going up the stairs, the grandfather clock from Bronte days - Patrick Bronte went up to bed promptly at 9 p.m. every night, stopping to wind this on the way. 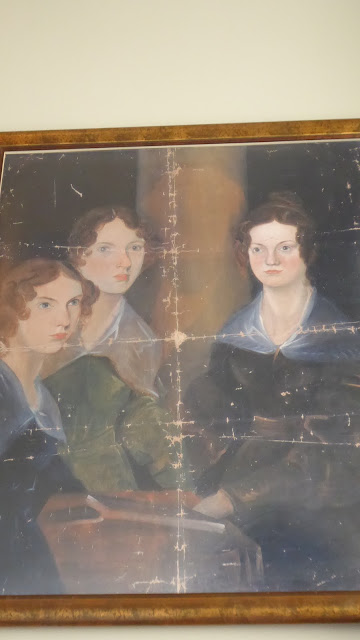 The portrait of the Bronte sisters painted by their brother Branwell - he scrubbed out his likeness as he was unhappy with it.  As you can see, he had no great talent as an artist, despite being sent off to study art.  There were some portraits by him in another room, and they were no better either!  They were, one assumes, only commissioned because of familial contacts.  This is a copy - the original is in the National Portrait Gallery. 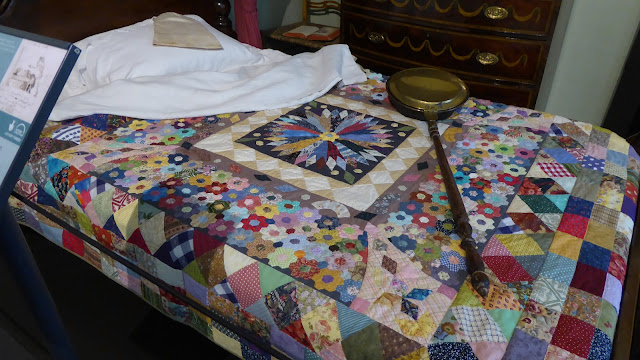 I couldn't resist several photos of this modern and colourful quilt which dressed the bed in Patrick Bronte's bedroom.  All hand-pieced and beautifully made. 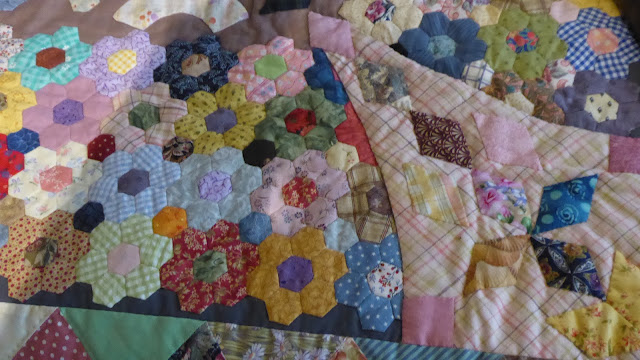 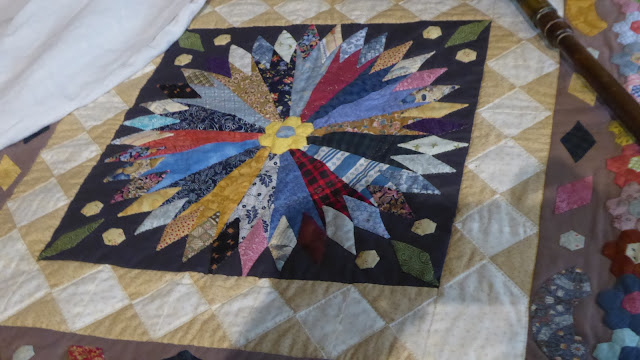 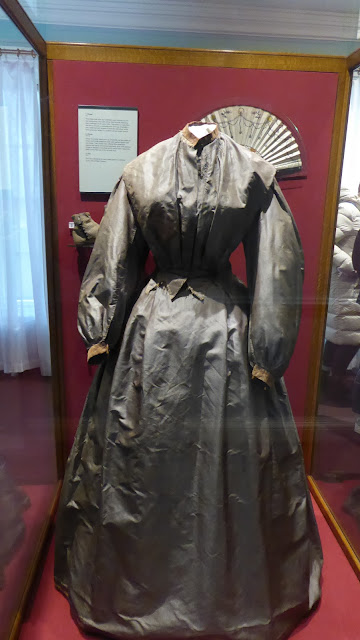 Above and below: dress and shoes worn by Charlotte Bronte after her marriage to Curate Arthur Bell Nicholls on their honeymoon, when they spent the first night in Conwy, and then crossed to Northern Ireland to meet his relations. 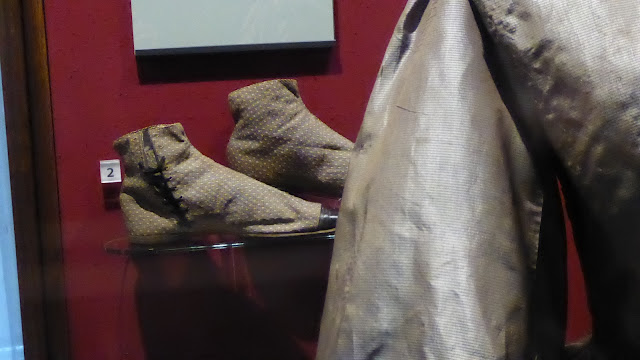 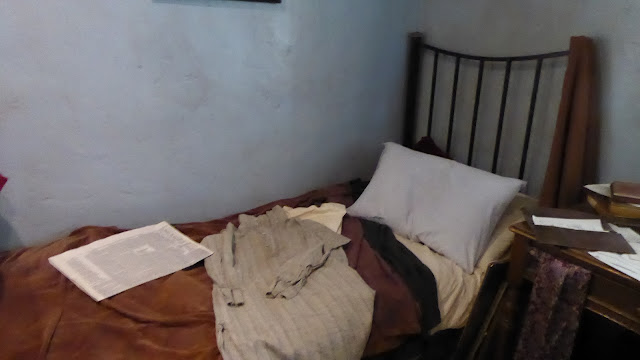 After the careful ordered rooms of the rest of the  Parsonage, Branwell's room was one the curators went to town on - gosh, he could have just left the room.  It was scruffy, chaotic and atmospheric.  Branwell died aged 31 in 1848, from addiction to Laudenum, Alchohol, and Opium and probably had underlying TB as well.  Wishing to show the power of the human will, he decided to die standing up . . . 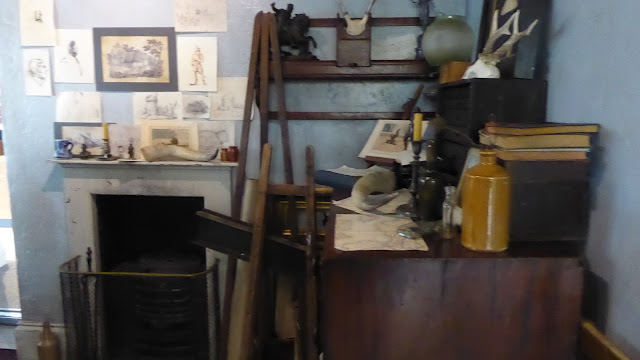 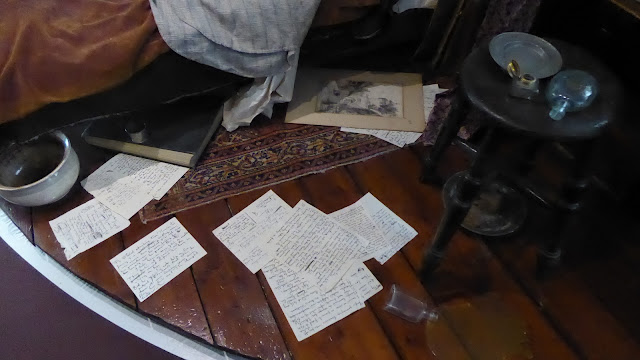 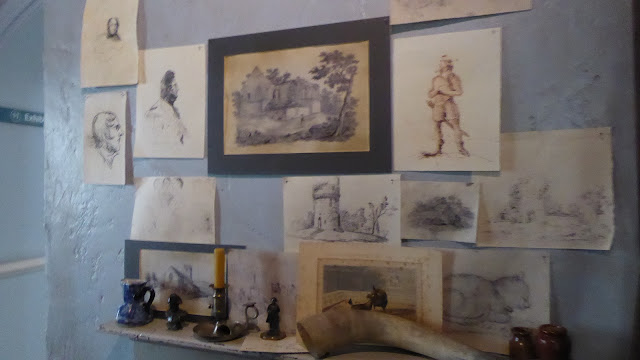 More tomorrow.  Currently shattered after a day out in the garden, taking advantage of this lovely sunny weather.  I just hope we don't have a replay of last year when I could scarcely go outside for pollen of one kind or another.   So I am going flat out, bearing in mind that we have to have it all ship-shape and Bristol fashion a.s.a.p. to go back on the market.
Posted by Bovey Belle at 11:06