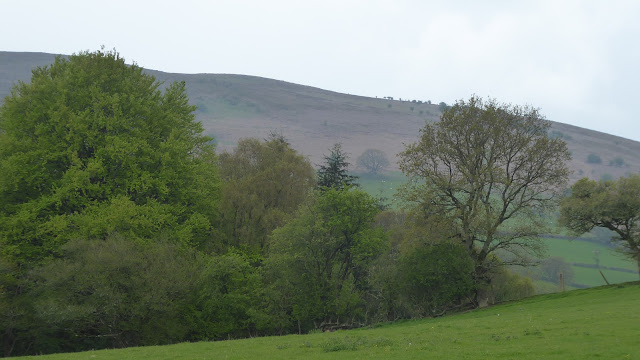 I took advantage of a dry end to the day last week and walked up the hill.  I'd not been this way for a couple of weeks so everything looked so much greener with leaves on the trees. 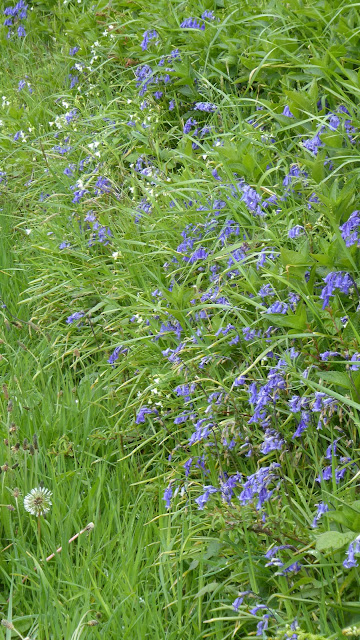 The lanes are so pretty at the moment with wild flowers - Bluebells and Stitchwort here. 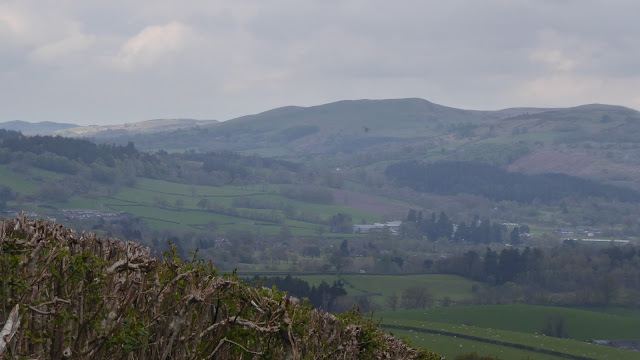 Looking down towards Builth. 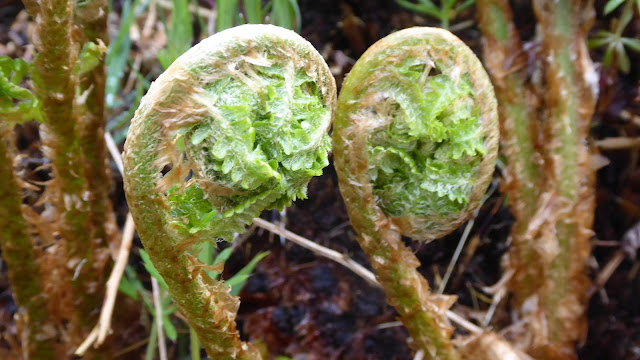 Unfurling bracken . . .  Eaten as a delicacy in China, Japan and Korea, but it is thought to be carcinogenic, including the spores.  Gosh, when I think of the dens we had in bracken when I was a kid . . . 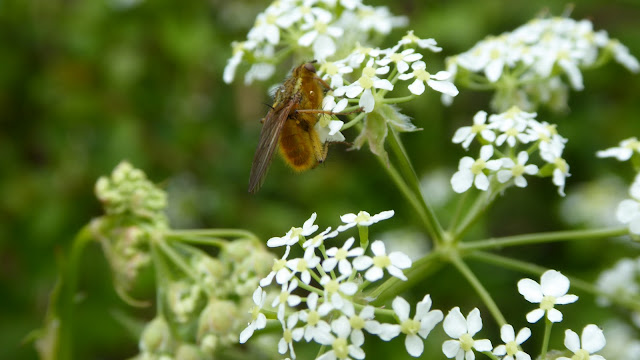 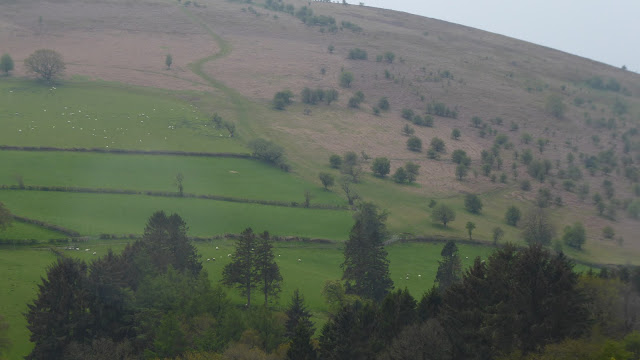 We still plan to walk round (and perhaps up when my back's not out - off to the Chiro again next week!) this lovely hill just up the road from us. 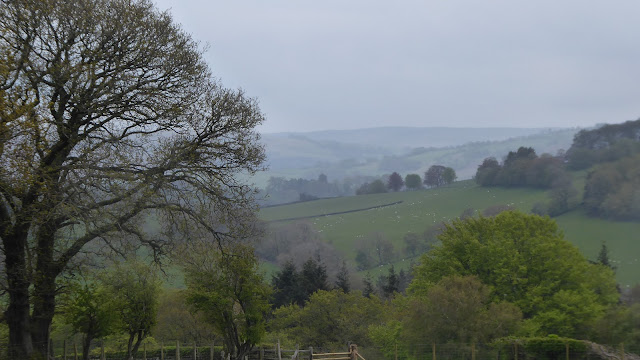 It's lovely to look across the landscape now that it is softened by leaves on the trees. 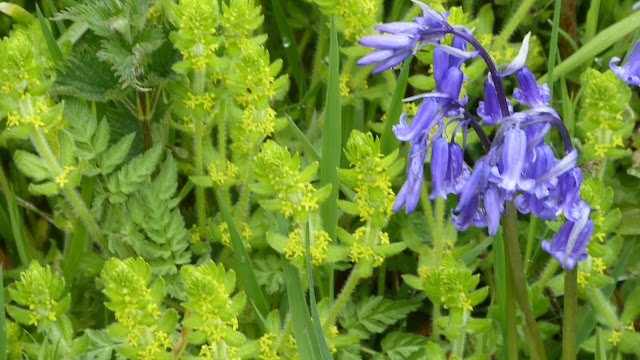 The Bluebells are quite late here - in Carmarthenshire they are nearly over - Tam went to the Bluebell Woods at Dinefwr yesterday and said as much.  Still, we are further north and spring is later here. 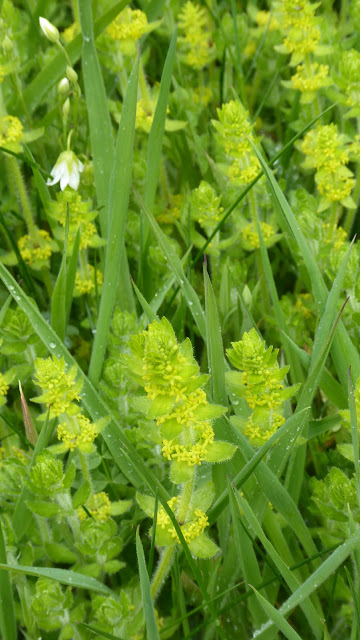 A close-up of Lady's Bedstraw, once used for bedding as its name suggests.  One Medieval legend has it that Jesus was born in bedstraw and bracken.  The bracken refused to acknowledge Jesus and had its flower taken away.  The bedstraw "bloomed in recognition" and was rewarded with a golden flower.
It was also associated with birth in Scandinavian mythology - it is called Frigg's Grass, as a sedative given in childbirth is made from it. (Frigg is the goddess of married women).  (https://www.plantlife.org.uk/uk/discover-wild-plants-nature/plant-fungi-species/ladys-bedstraw) 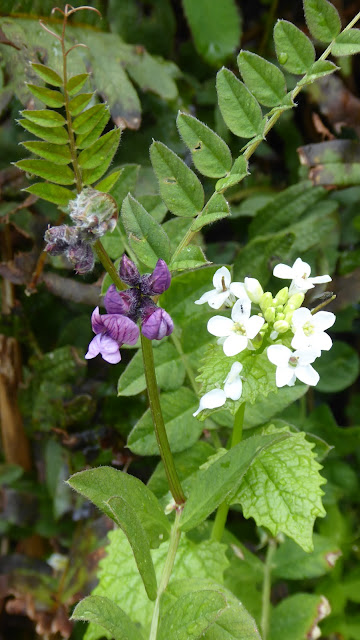 Common Vetch and Garlic Mustard snuggled together.  Another name for this vetch is Poor Man's Peas, and there is evidence to suggest it was regularly eaten in the past and even cultivated for its seed pods as they are high in protein.  Medicinally it has been used to treat eczema and similar skin conditions. Garlic Mustard is an antiseptic herb, used on skin ulcers, bruises and sores, and also for clearing coughs and colds.  The greens are high in vitamins A and C and apparently the roots taste like Horseradish.  Vetch from:
https://www.wildfooduk.com/edible-wild-plants/vetch-3/ 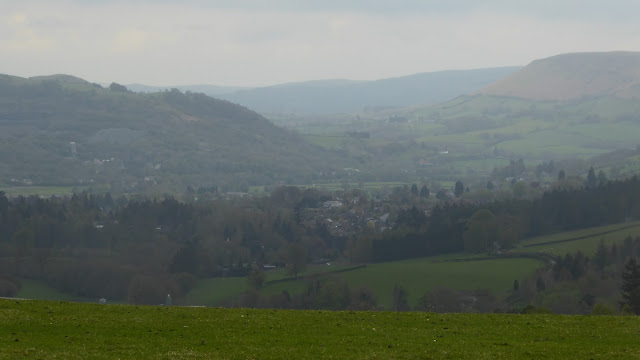 Looking down across Builth, sat in the valley bottom below the hills.  When the Royal Welsh show is held and the weather is very hot, the showground acts like an amphitheatre and holds that heat. Folk have been known to swoon from it. 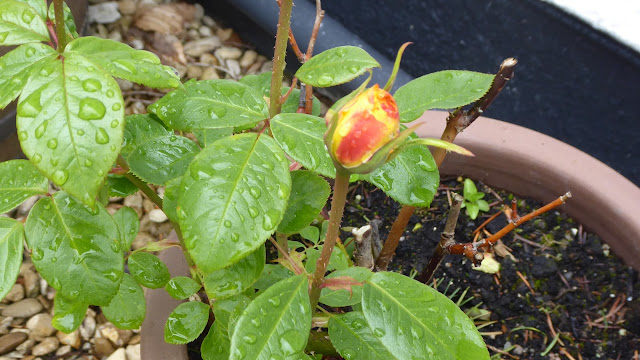 Finally, a rose in a planter, one of several I inherited with the house, is almost in bloom.  I gave them all a feed this week, which you are meant to do before they bloom and some are putting out buds now.
Posted by Bovey Belle at 11:45