A walk along Brecon Canal

Yesterday was far too nice a day not to take advantage of the sunshine and go for a walk.  Once we had unpacked from the Fair, Tam and I set off to Brecon to do the shopping there for a change.  We normally go once a month.  We parked near to the Canal and walked beside it for about a mile and a half, up as far as the A40.  On returning to the car I foraged a few tiny yellow Mirabelle plums which had fallen from a tree on the bank by the road, caught by tangles of ivy and long grass and so unbruised. There was a similar sized red one too, but I couldn't shake any down! 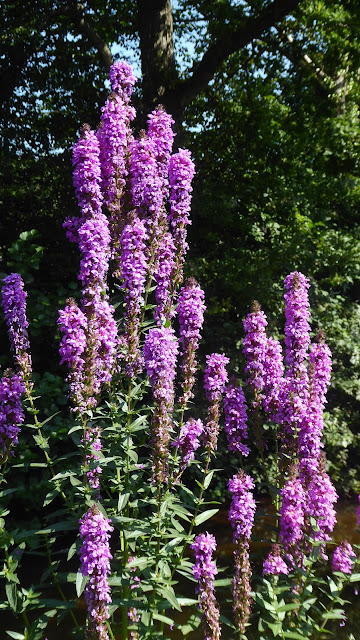 Purple Loosestrife was still in full bloom along the Canal. 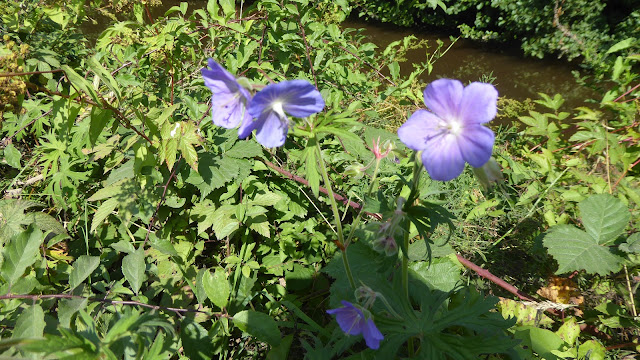 The last smile of summer on these Meadow Cranesbill. 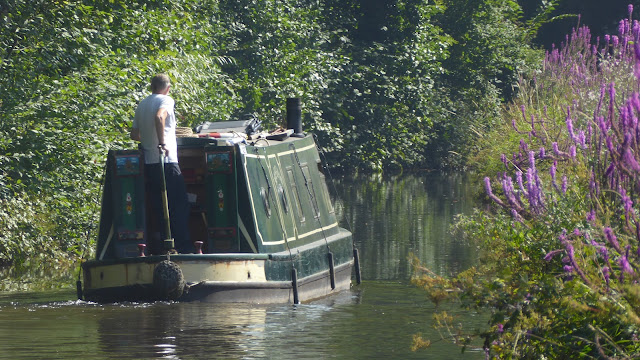 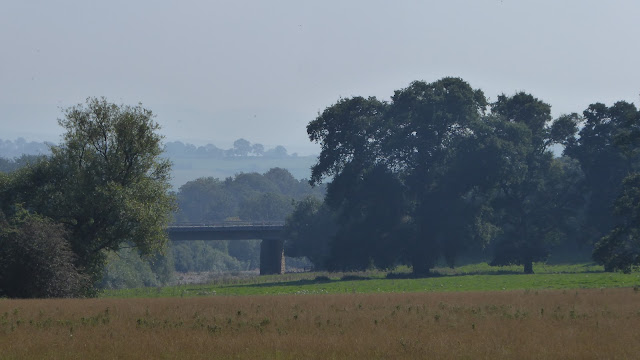 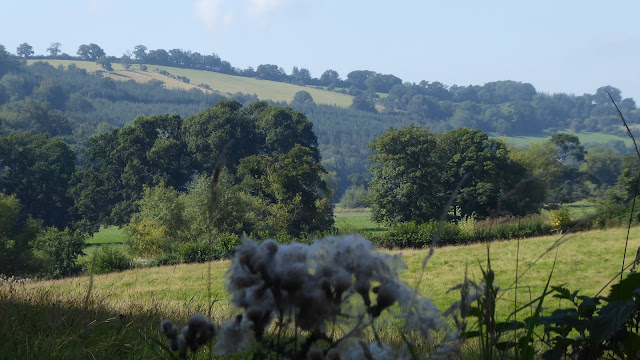 The fields looked sleepy in the heat haze. 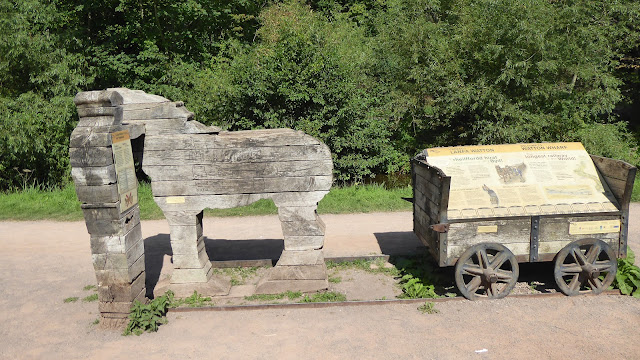 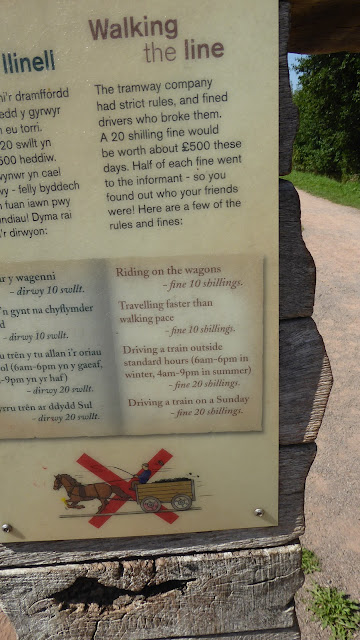 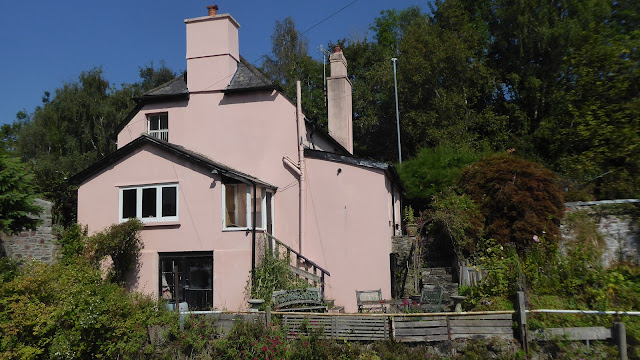 This house was on the market last year, and still appears empty.  The people who lived there were great gardeners and always had a lovely show in their garden.  Sadly this year it was only the perennials in bloom. 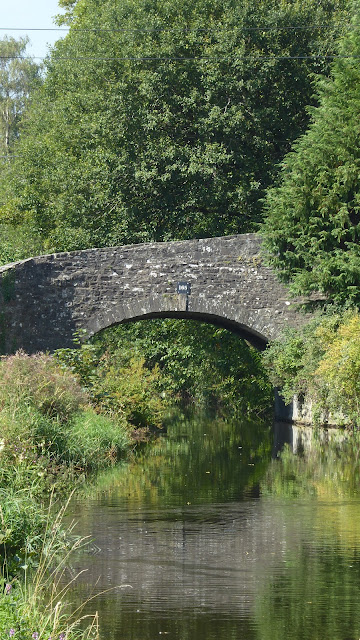 The bridge we crossed back to the car.  If you carry on another mile or so you get to the Brecon Basin - end of the line.
Did we have a good Fair?  Yes, very, BUT it was exhausting.  We set up the Gazebo and tables on the Friday - put up the displays early Saturday morning, but then had to take the displays down at the end of the day as I didn't sleep on site.  Sunday was a repeat performance.  Saturday was extremely busy. 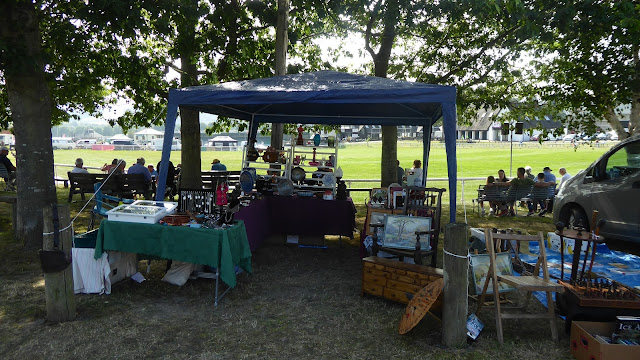 We had a lovely shady spot - this was the last grass pitch they had - they had suggested going by the wall of a building, but I wanted to try and tether the gazebo (a wise move as it got gusty on Saturday afternoon).  Lots of folk said what a lovely spot we had, and we didn't boil like the other outside folk in full sun.  On the Sunday we mopped up a few sales too as people who still had money left, came and shopped with us on the way out.  I sold my three lovely children's chairs to a Dealer friend so they will now be offered in her Narberth shop.
Of course, we had the idiots come by too.  One, who when I showed him the wear pattern on the legs of the little child's rocker, from where children had put their legs under to rock it, loftily announced, oh no, that was because the wood they used for the legs was square and they hadn't bothered finishing the leg off properly.  Hadn't he ever heard of turning a leg on a pole lathe?  Clearly not!!
Everyone was plagued by a Traveller invasion - the women and children all in their finery - the blokes with the same slicked-back haircuts and my goodness you had to have your wits around you when the lads were at your stall.  They were after knives, and of course, we had our antique ones.  3 or 4 would come in and pick things up, ask questions, try and confuse you - it was like a three card trick but I am used to their ways and watched them like a hawk.
I now have the money for a greenhouse (without dipping into our savings), which was my intention, so this morning I have been checking what is for sale out there and trying to work out whether glass or polycarbonate is best.  I'm leaning towards the latter at the moment as we face South, so need some protection for plants in the greenhouse.  What I'd really like is a Rhino greenhouse, but I didn't earn THAT much!!  We do have extra money to cover the rewiring or the bathroom fitting anyway, so it was well worth getting tired out!