This morning we had a phone call from the last plumber who we asked to come and quote for fitting the new bathroom (delivered in June!)  His price was acceptable and we wanted him to do the job as he knows this house and the peculiarities of its plumbing.  Having had to dump the plumber who wanted the price of a small car to do the job, we were starting to run out of local plumbers and thinking of having to bribe our plumber from Carmarthenshire to come and do the job for us. 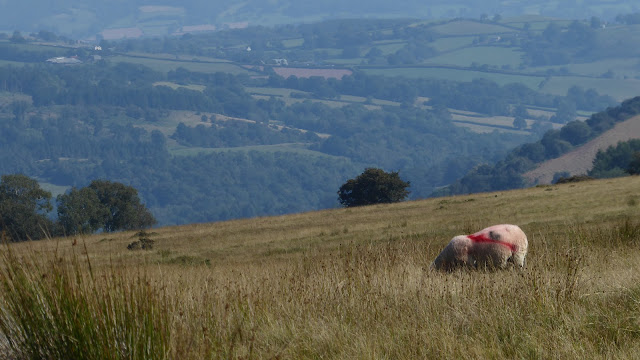 After we had done the shopping in Brecon on Monday, Tam and I came back "over the top" which is just my favourite place locally, almost my favourite ever place - it's up towards the top of the list. Enjoy.  (That's spray dye on the sheep by the way.  There are some on the Eppynt road to Brecon which have been sprayed bright pink all over!  Easy to find if they've strayed.) 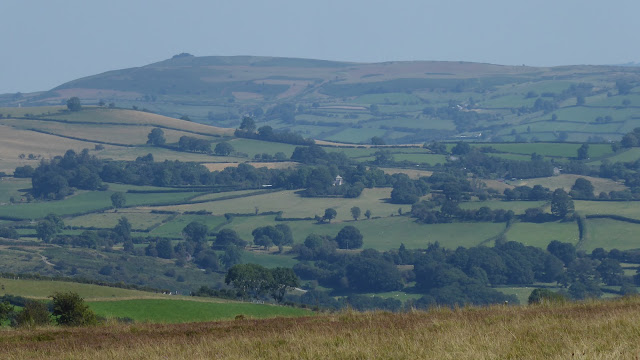 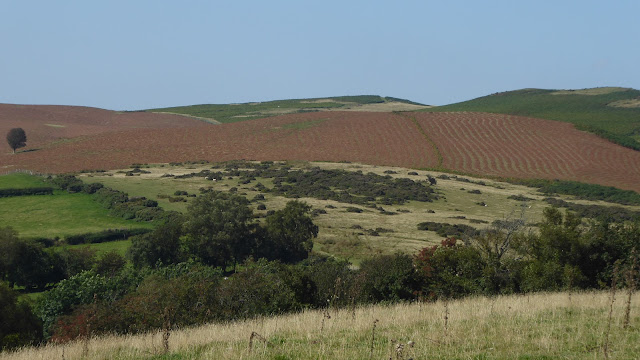 The bracken has been cut and in some places baled.  I don't know if it is used for bedding at all, but I can remember reading it is carcinogenic so perhaps not. 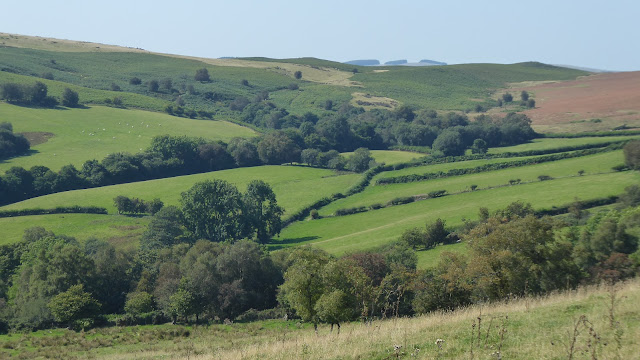 The dark bits like bushy eyebrows, centre, are some of the small pine plantings beloved of the Army, up on the further ranges of the Eppynt. 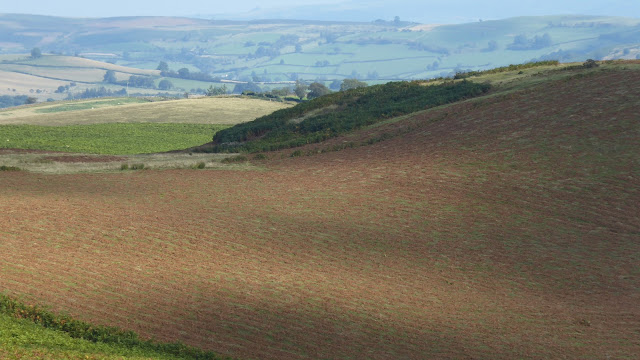 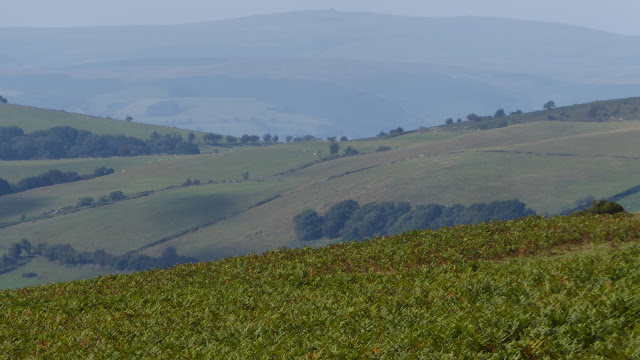 I have had a busy day, though I did sit down and watch Vera, whilst polishing the very tarnished metalwork on a Victorian writing box.  Another thing we have No Room For. 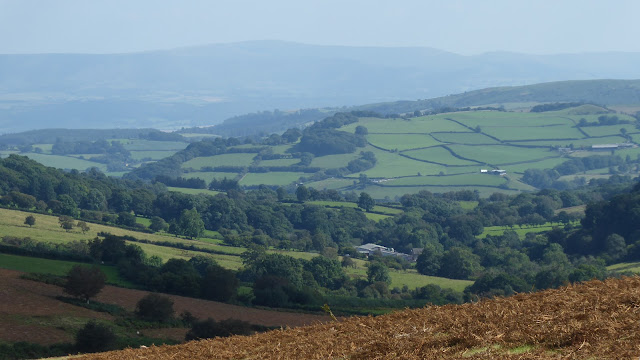 I got some weeding done in the garden too, clearing some of the dozens of wild strawberries which grow on the bank - I was clearing the bottom part, so I can get some bulbs tomorrow and get them planted. A whole wheelbarrow full of weeds came out! I put a plant whose nametag has been lost into a pot (taken me weeks to get around to this!) - it has nearly-black leaves and a tall flower spike with tiny white flowers.  Just flowering now.  I'll take a photo tomorrow. 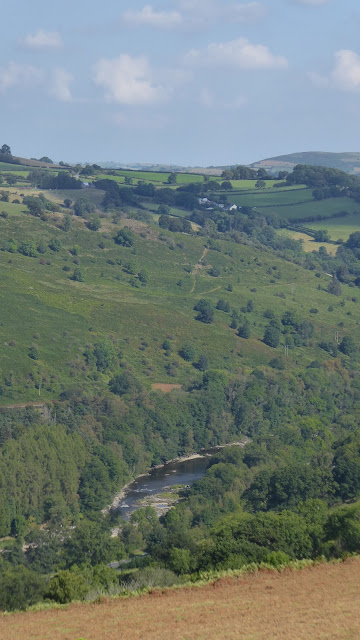 I have also had a good tidy-up in the kitchen and brought down my little Gwili Pottery lamp to go on the counter by the kettle.  I bought a new lamp for my bedside -not everyone's taste as it's a 1950s? ceramic base lamp with Uncle Tom Cobley on it.  A link with my g.g. aunt who was a schoolmistress at Widecombe School in Victorian times.  I just happened to find a matching plate at the Fair at the weekend and that's on display there now too.  I know - I'm a lost cause.  Old-fashioned and sentimental to the core. 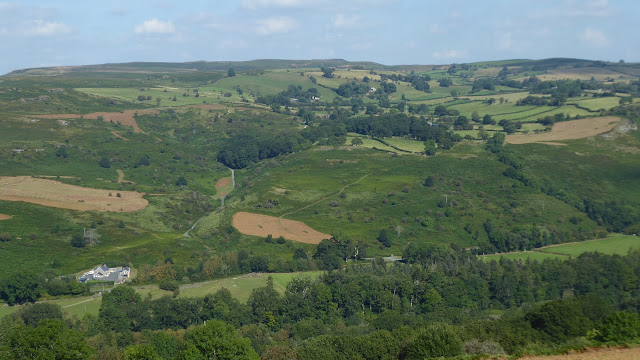 When Tam and I were parked up here, drinking in the view, there was a car in front and the chap was clearly a professional photographer, looking at his camera and huge lens.  Anyway, we fell into conversation and had a really lovely chat about wildlife.  Like us, he couldn't believe how beautiful it was around here and he was saying he had about 5,000 + photos of the scenery and wildlife.  He lived locally.
Talking of wildlife, we have heart a cock pheasant in the locale again so I am guessing Henry VIII is back on patrol (though we've not seen him yet.)  Two more nests of Swallows fledged at the weekend and were doing laps of the yard and house and then by Monday, had headed South.  Hard to imagine how difficult it must be - just learned to fly and you have to fly thousands of miles.  We still have young being fed in one nest, and two House Martin families are still feeding youngsters, but the skies are so quiet now, after being busy with them all summer long.  How I will miss them. 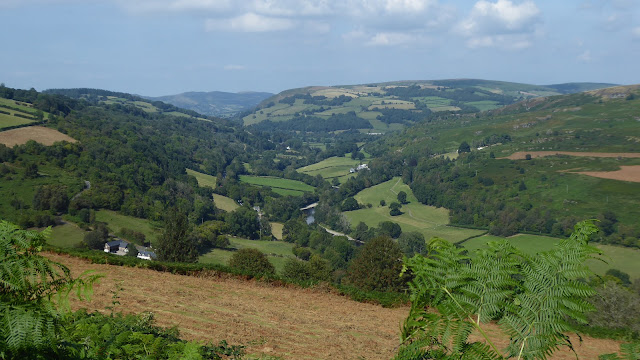