shepherd's (or sailor's) warning.  Round here it would be shepherd's of course, as the farms seem to be mostly given over to sheep farming though the fields opposite currently have a suckler herd of beef cattle in. 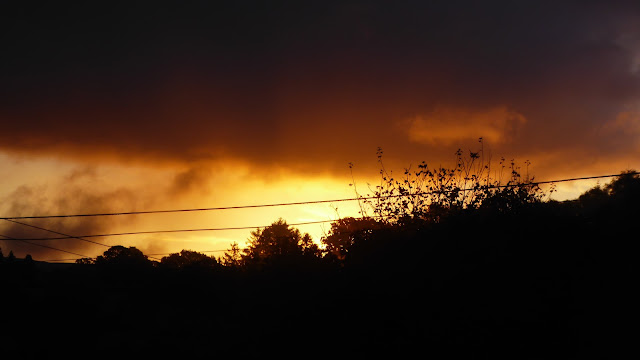 This morning's sky at sunrise reminded me of that scene in Gone With the Wind, where Rhett and Scarlett are pictured against the backdrop of Atlanta in flames as the Union Army get there, and all the warehouses are afire and they try and escape in the buggy with Melanie and her new baby in the back. 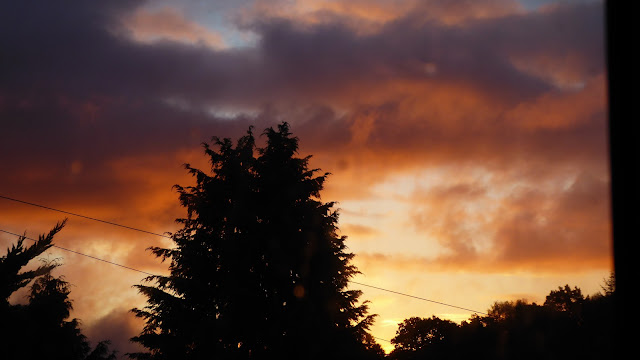 Yesterday it rained a bit - more than a bit really, fairly torrentially all morning and into the afternoon.  It was of course Bin Day, and the 3 weekly putting out of the Wheelie Bin, so I got a bit damp taking that up the track. Despite the weather, K and I did the grocery shop in Llandod and I got birdseed and peanuts.

Our local ironmongers had an offer on a truly Squirrel Proof nut feeder (£4 off), so I invested in one and so far, so good.  Mind you, the squirrel baffle I bought for the seed feeder seems to have deterred them and we don't see them in the garden so often.  The parents were not beyond leaping onto that feeder from the rose bush but the youngsters hadn't copied them. 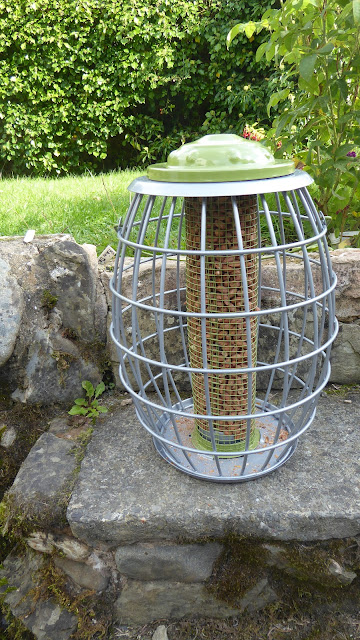 It was definitely a day to carry on with decorating our bedroom, so I finally got back in there and now that the sink has been taken out of the corner, I could get in there to paint.  I am back to intending to use the dark blue wallpaper below the dado rail - middle daughter G found a lovely William Morris paper which I'd like to have used, but couldn't bring myself to pay £60 or so a roll for it.  I will have to practice my wallpapering skills although the hardest part will be moving all the bloomin' furniture out and back again.  I had to take all the drawers out of my chest of drawers yesterday so I could move it.  Now I have a bag of surplus clothing to go to the charity shop, and a pile to go to the Tip. 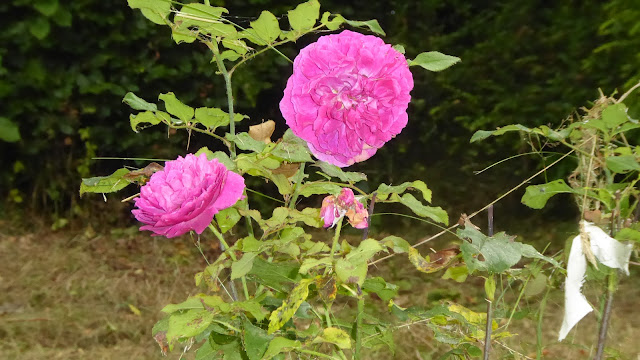 The roses are still blooming - here is Gabriel Oak, though it was late afternoon so the flash operated and robbed it of its true deep pink colour. 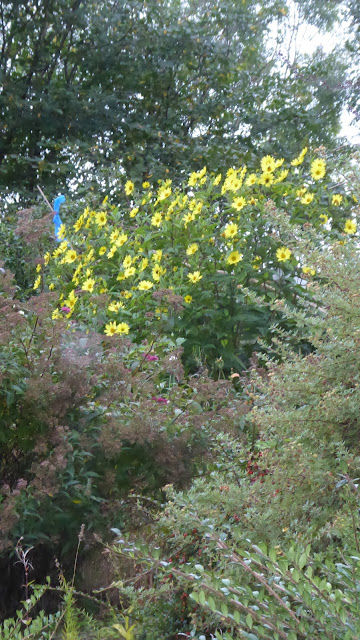 Helianthus (Autumn Gold I think).  Bought for £3 at the Llandod car boot sale earlier in the year.  I got another one there last weekend to put up on the bank - they add such colour behind the shrubs. 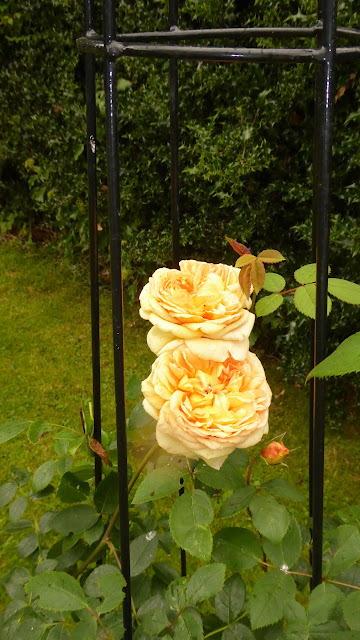 Bathsheba, just getting better and better. 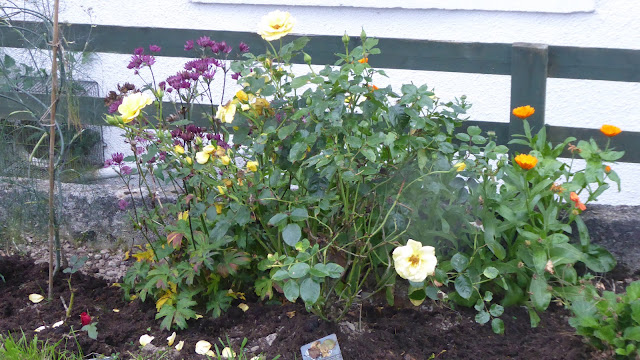 Part of the new border. 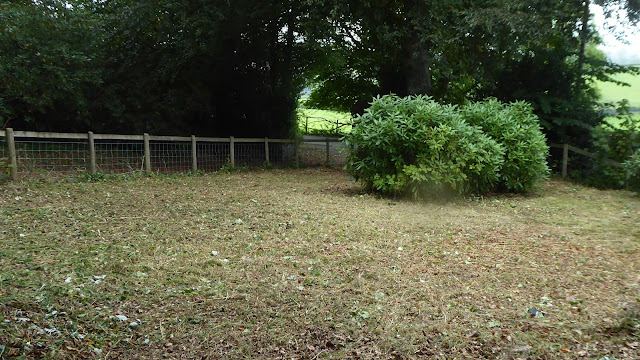 I - foolishly as it turned out - employed a chap to clear the two small paddocks (overgrown with swathes of Rosebay Willowherb etc) that the last owner of the house had used and recommended.  All I can say is, she had more money than us.  I shan't be using him again - it cost 4 times what we paid to have our paddock cut back at the old house.  His quote was his daily rate and when he didn't turn up until 2.15 I - foolishly - assumed that it would be a half day rate.  Nope.  Then VAT on top - nearly £200!!  Tradesmen in these parts are a damn site more expensive than in Carmarthenshire. 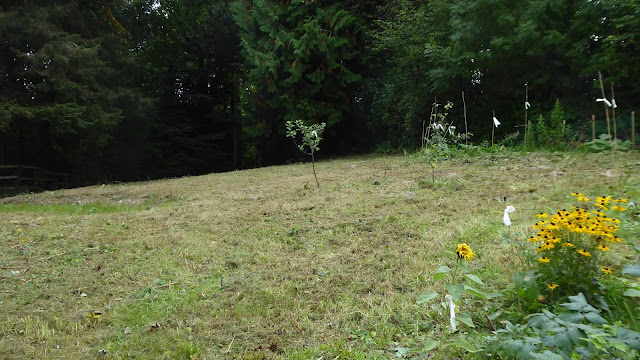 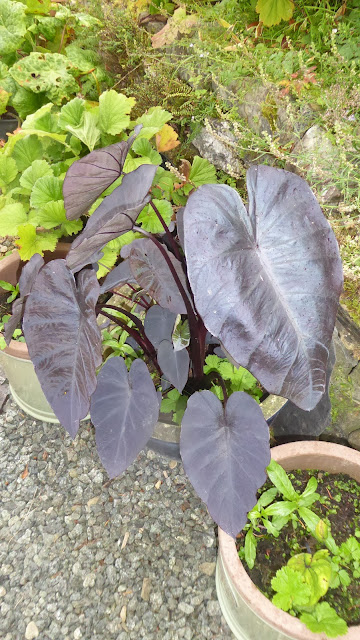 One of my Colocasias - the one that came up and put out leaves properly.  One of the other two is just to the front (with a weed and a baby self-sown Geum).  The third barely put out a leaf before a slug nobbled it.  Before the first frost I need to cut back foliage and dig them up to be stored in a dry room over the winter.  Next year hopefully we won't be having frosts in May - they went in too late and  two were planted too shallow.  I have learned from my mistakes this year.
So, back to decorating today.  I'll put some photos up tomorrow.
Posted by Bovey Belle at 01:28