Going by the scenic route 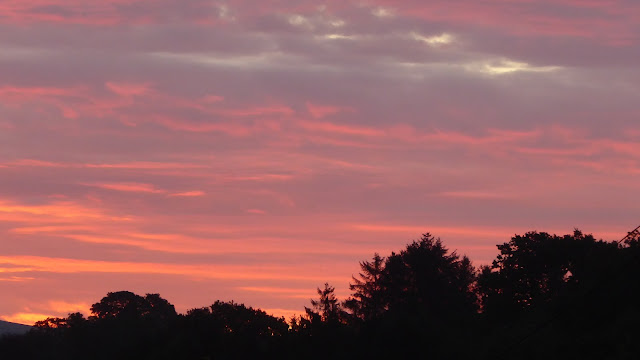 I'm pretty sure this was Saturday's sunrise.  So pretty.  Despite it being a Shepherd's Warning, we had a decent day, and drove up to the Antiques and Collectibles Fair at Oswestry, where we saw a friend from Hay, up there checking it out for potential stock.  We weren't there early enough to find the beautiful Persian plate we saw carried out, along with a super primitive horse weather vane.  Someone made a killing on those, that's for sure.  It's not a huge Fair and has a totally different feel to Malvern, which is much bigger (HUGELY bigger on Bank Holidays) and has a lot more dealers about.  Mind you, not as bad as the old Carmarthen Fleamarket where you practically had to fight to get close to get a bargain as everyone was out to beat fellow dealers to a bargain.

On the way back we visited the church at Llananno again (we'd stopped on our way back from Plas Newydd last week), to show Tam the rood screen.  I will do a separate post for this. 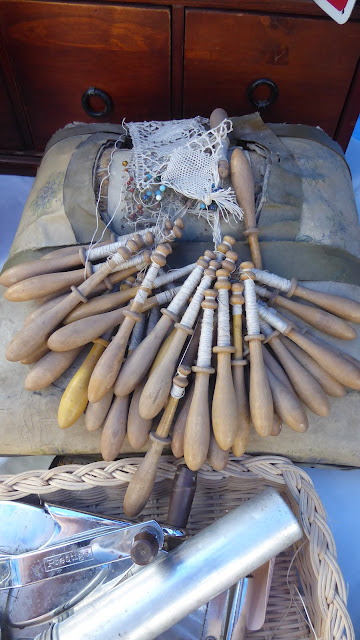 Just two photos from Oswestry - a lace making pillow, French or Belgian by the shape of the bobbins.  How on earth did they tell one from another?  At least the British ones have different colour beads on or different decorations or made of bone or turned wood.  Below, a 70s hexagon quilt. 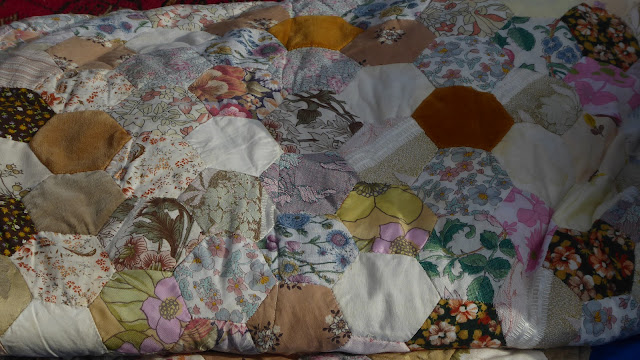 Being gluttons for punishment, the following day we all got up early and went to Malvern Fleamarket.  It was much much quieter than the August (Bank Holiday) one - a fraction of the stalls there.  Once again we had a quiet stroll around, chatting to friends, and this  lovely horse picture (a print of a Stubbs painting) came home with me. 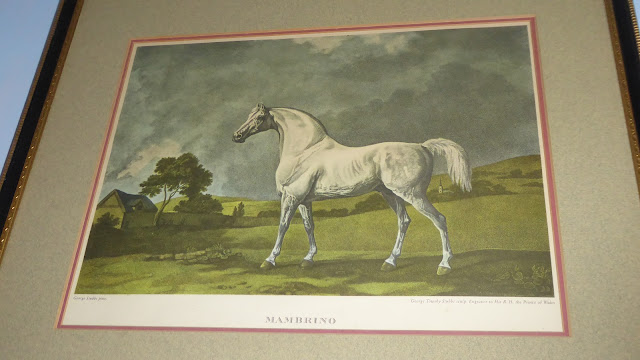 It is the Thoroughbred stallion Mambrino. 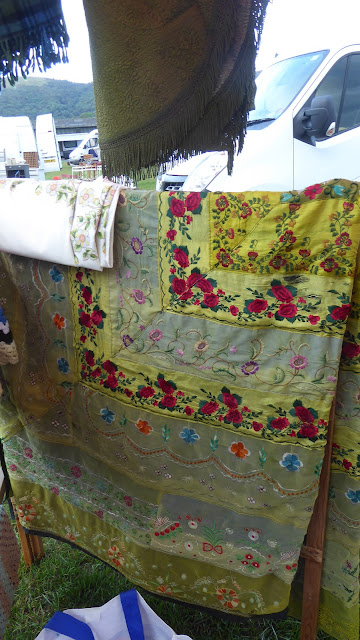 Also at Malvern . . . Beautiful, but so fragile and the silk was rent apart in a couple of places. 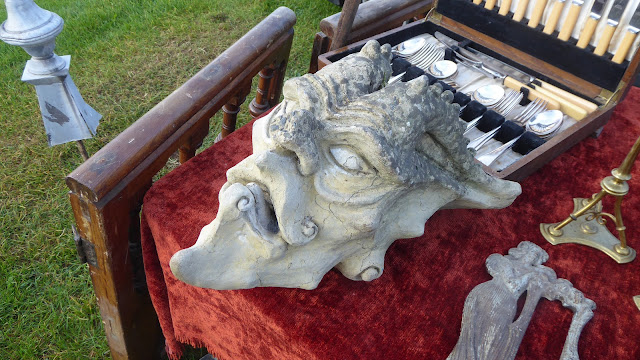 A shame it had a broken nose, but  I wouldn't want it as part of my decor. 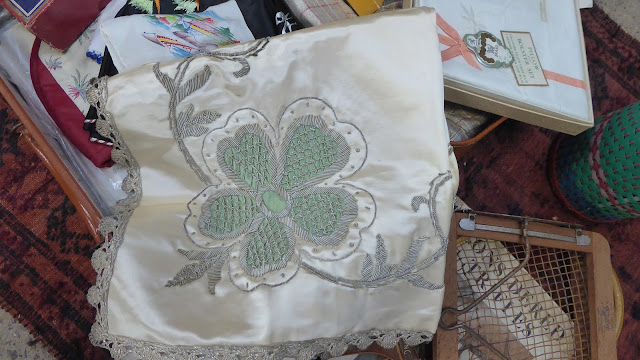 This was so pretty and beautifully sewn, but at £20 it stayed there. 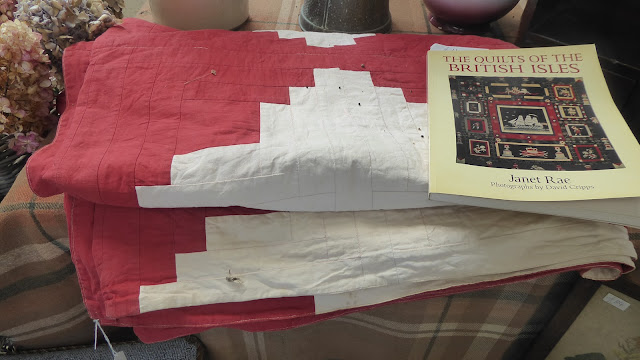 Log Cabin quilt (and I did look at the book but left it there). 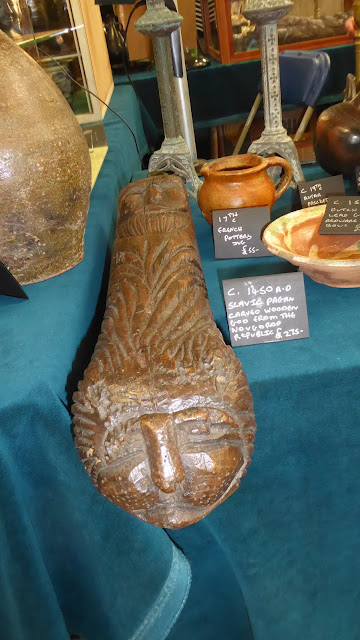 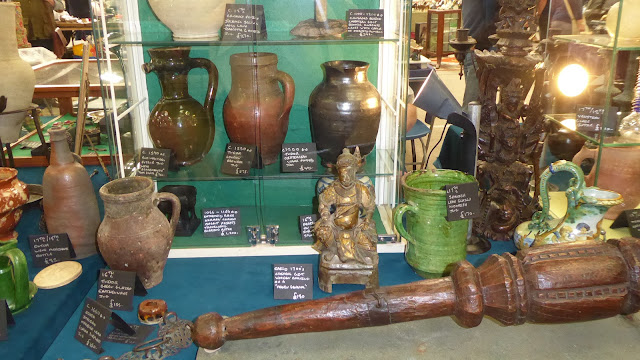 Lots of interesting things.
Then we bought a leather recliner chair from Ebay, which was for collection just outside Shrewsbury , so that's where we went yesterday.  It was somewhat hefty, having a metal framework for the moving parts, but Keith is very pleased with it and I managed to manhandle it into place. Now we just have to get rid of the spare Parker Knoll armchair . . .
Tam got us set up for using a phone Satnav app which took us, shall we say, the scenic route up to get the chair.  In fact, it took us on the same route as Tam and I took when we went in search of Cascob and Discoed churches earlier in the year.  We came through Clun (where we once viewed a property half a lifetime ago before ending up in Wales).  We viewed one more recently too, which we absolutely loved (Bryn-y-Cagley Hall it was called), but our house stubbornly didn't sell and so we couldn't offer on it.  Mind you, thinking of it now, the garden (over 70 David Austin roses to tend to), big orchard and soft fruit area, would have been too much for me these days, so perhaps it was for the best.  Houseman's "Clunton and Clunbury, Clungunford and Clun, the quietest places under the sun" still seems to run true as Clun was very quiet and peaceful yesterday.  We passed by turnings to the oddly-named Evenjobb, New Invention, Nind and through the village of Hope, and looked longingly at a turning which led to a stone circle (but probably not possible for Keith to reach at the moment), and drove through the Shropshire Hills and past the turning for the Stiperstones - wonderful walking country.
Anyway, we saw a sign for Machynlleth on the way home - it's years since we were last there and we weren't in a hurry to get home, so we went there and had a very slow wander round the antique shops before coming home on an unmarked road which went "behind" the Cambrian mountains.  Stunning views in places and I got a few photos. 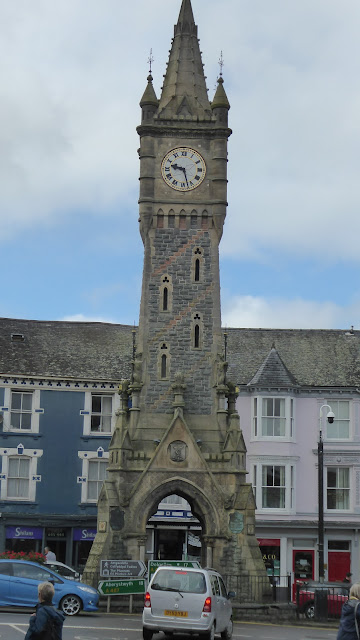 Machynlleth, where it was market day. 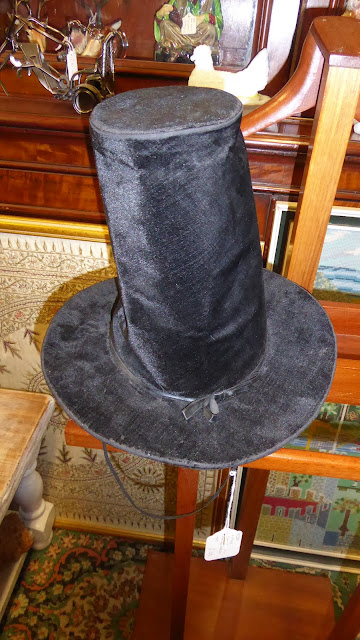 What ALL Welsh ladies used to wear, back in the day. 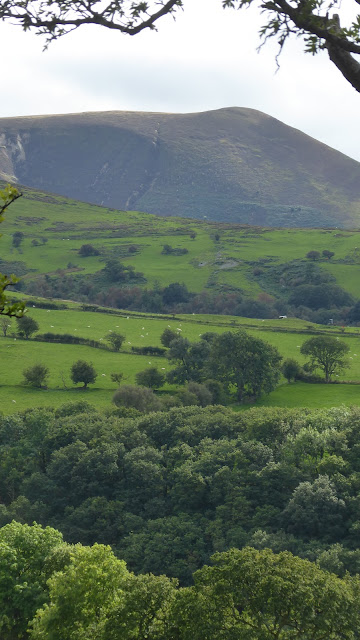 Then the scenic route home a we noticed the sign for Llanidloes just as we were leaving the town.  Up through the mountains, and so beautiful . . . 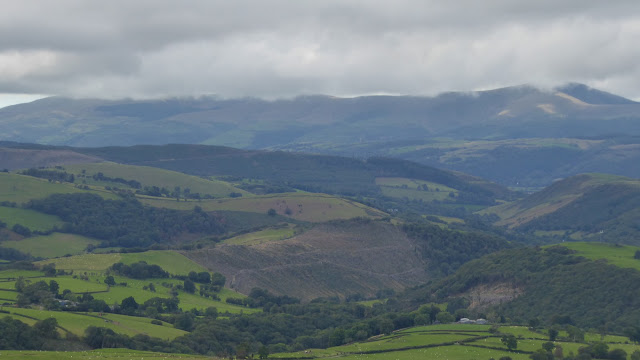 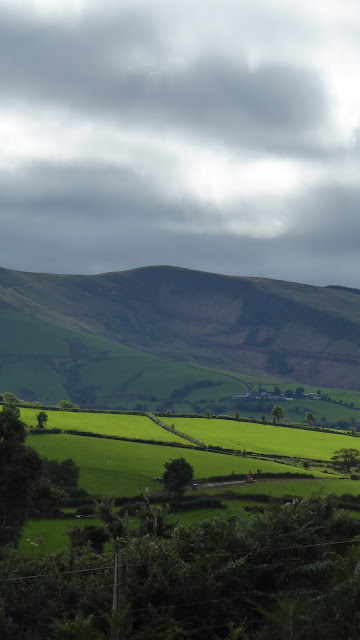 A little sun to give a splash of colour. 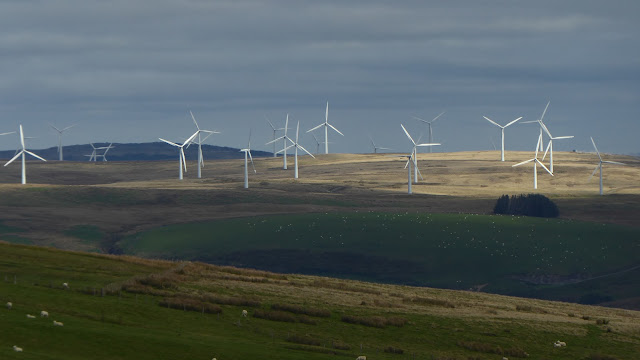 One of the ubiquitous wind farms on the Welsh uplands. 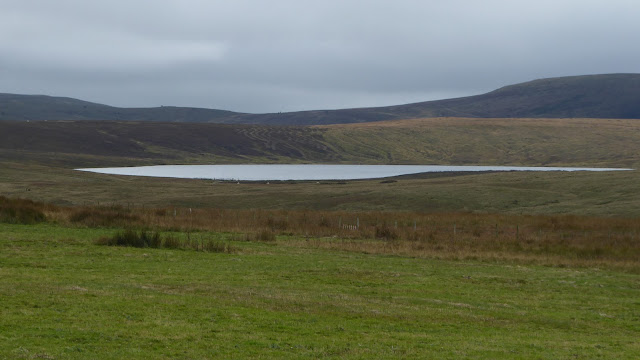 I missed the best view which is of the reservoir up there - Nant y Moch.  Next time!  However, here is a pool instead . . .
Posted by Bovey Belle at 03:55