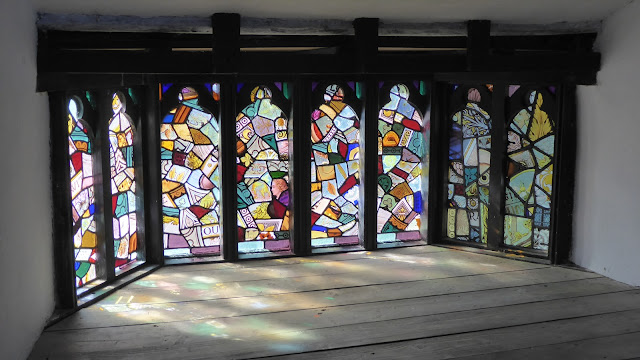 My birthday this year was, again, in Lockdown and so I decided to defer my Birthday Day Out until later in the year.  I was beginning to think it would be forgotten, when K and I decided we needed a day out, and Tam was away at a friend's wedding (with her young man).  We booked to go to Plas Newydd at Llangollen in Denbighshire. It's about 2 hours' drive from here. It's somewhere I've always wanted to go - in fact, since I was in my 20s, so it's only taken me nearly 50 years to get there!  K and I had lunch there too - cheese and ham toasties which more than filled us up until teatime.  They have a little cafe in the old stables and stable-yard. 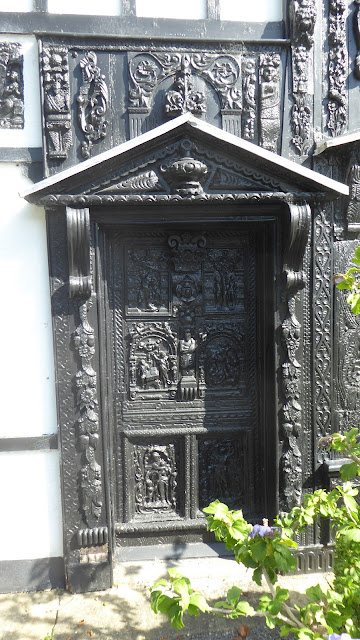 As you may have guessed, the new header photo is Plas Newydd in its beautiful setting, and up above it on the hill, is Castle Dinas Bran.  Plas Newydd is famous for being where the Two Ladies of Llangollen lived.  They were very close friends who escaped from a boring family life - Coflein says they "eloped together" but apparently there is no evidence that they were actually lesbians and it was something they vigorously denied when someone suggested it in later years. 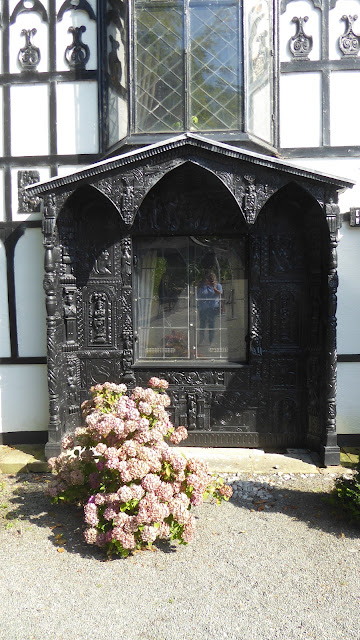 Sarah Ponsonby and Eleanor Butler began renting what started out as a fairly ordinary Welsh 2 story Welsh cottage called Pen-y-Maes in 1778, and over the years improved it by getting a craze for the Gothic and embellishing almost every surface with carvings from churches and old furniture, which was available when churches were demolished or fell down from lack of maintenance.   Many of the carvings were gifts from visitors and friends, but they were also able to buy cartloads of them cheaply and a local handyman put them together as best he could fit them. 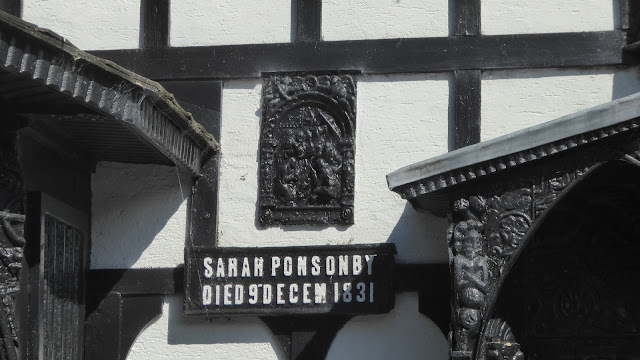 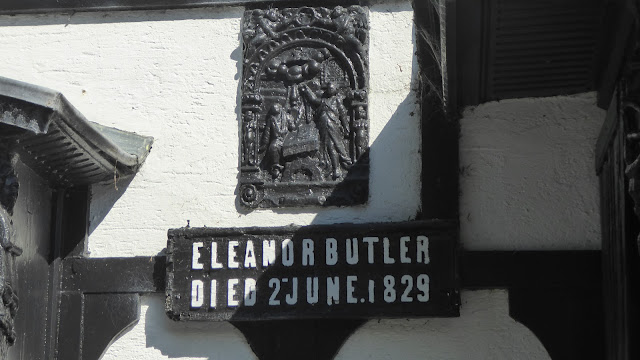 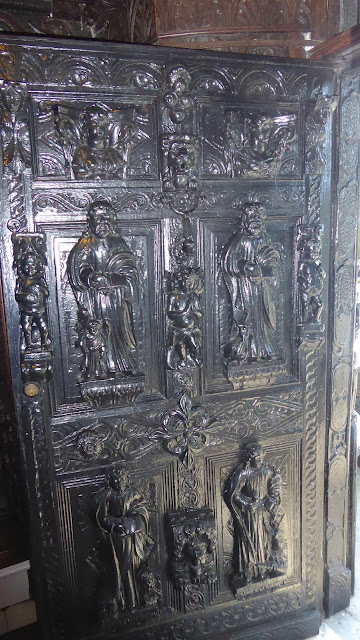 This door was put together and like all the outside pieces, weatherproofed by painting black. 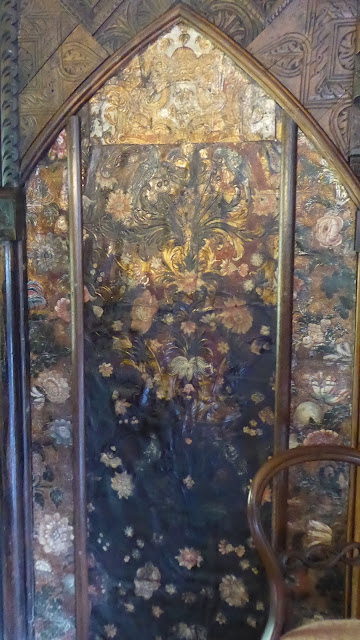 In some areas, painted leather had been used for decoration.  I've seen this at Hellens, an old house at Much Marcle which were visited on another birthday outing some 15 years or so back now. 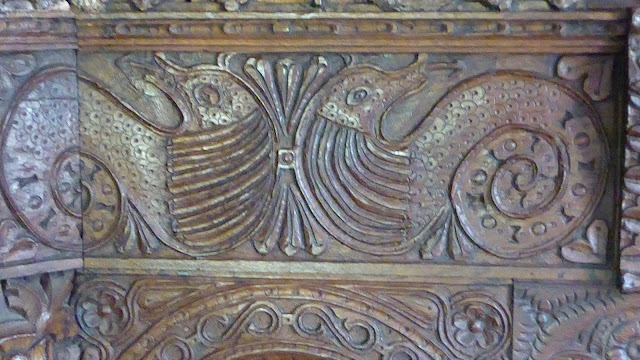 You know when these carvings are bestiary beasts, as they have forked tongues. These look like Maned Slugs with Attitude! 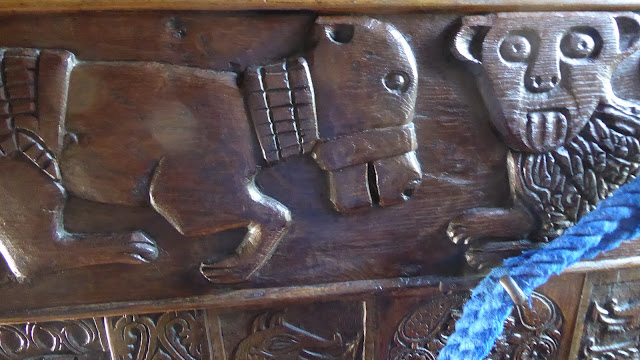 I loved this engraving.  I think it may be a bear on the left (but don't quote me on it) but I stupidly got in too close so didn't get the entire panel.  On the right is a Lion.  When this was carved, I think there was a verbal instruction, "OK, I want a Lion.  Yes, I know you've never seen one, but just imagine a very big pussy cat with a cross face, and lots of hair on its neck and shoulders."  I just love its expression - it looks like it's seen a ghost! 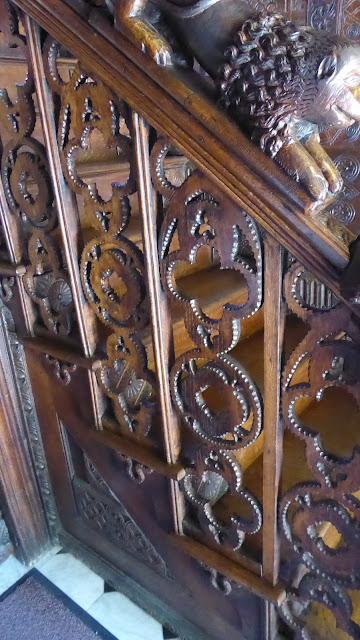 Part of another Lion, and beautiful carvings up the staircase. 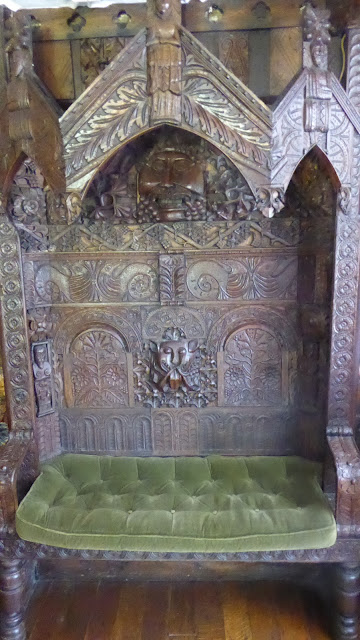 A Wainscot type chair completely made from carvings.  I like the fierce face at the top of the back beneath the canopy. 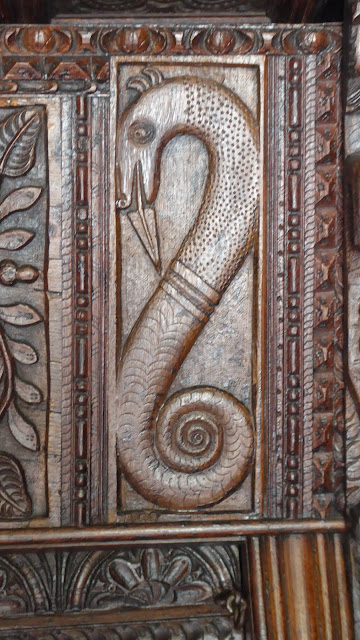 Another beastie with a forked tongue.  There were quite a few in various guises through the house. 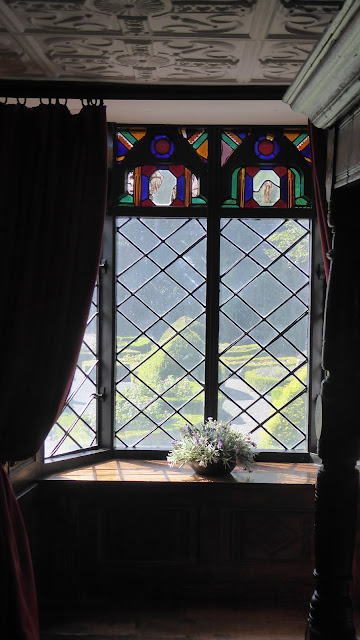 This was the stained glass insert in the window of the Ladies' bedroom.   Fragments (some of them early Medieval) were used throughout the house, and the photo at the top of the page here, was taken up in the attic bedroom of their servant, Mary Caryll, who had helped them escape from Ireland and was loyal to the end. She is buried with them. 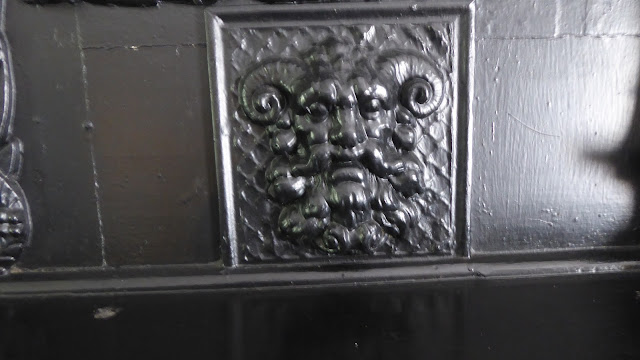 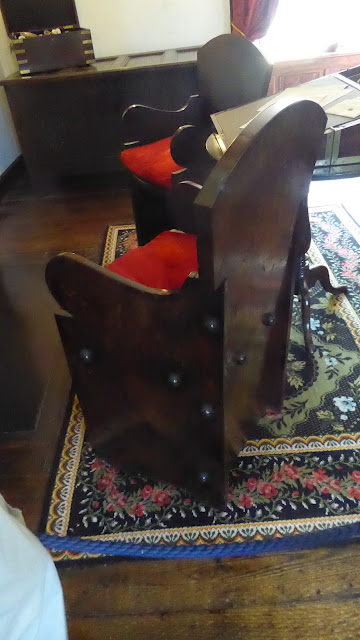 A pair of matching solid Walnut chairs in the Ladies' bedroom.  Keith loved these (work  in solid Walnut is SO rare - there must have been a fallen tree someone put to good use).  He was even measuring them up and saying, "They work just as well in Oak" - and we happen to have some big oak planking here . . . 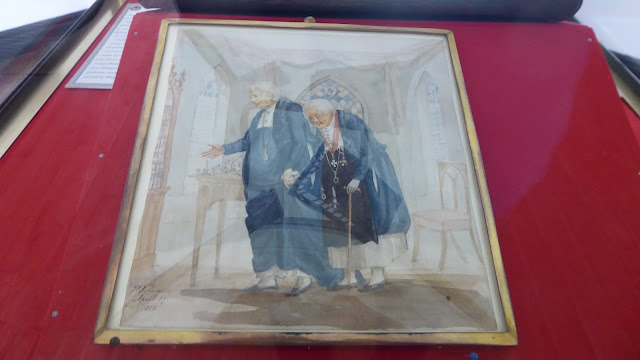 Finally, for today, a painting of the Ladies towards the end of their lives.
Posted by Bovey Belle at 12:21