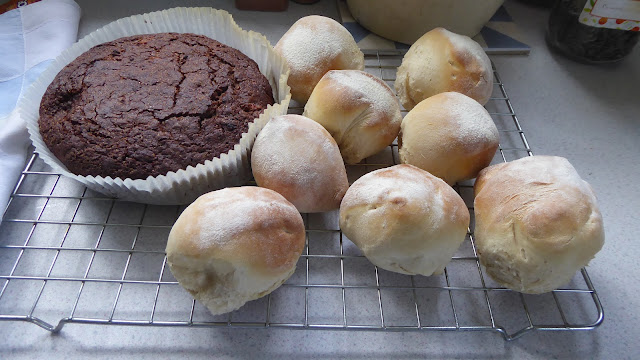 Chocolate apple cake and Scotch rolls.  First baking I've done in ages.  Like a lot of things, his has gone by the wayside since moving here.  Last year was a real first for things I'd NOT made which I had made regularly in the past. 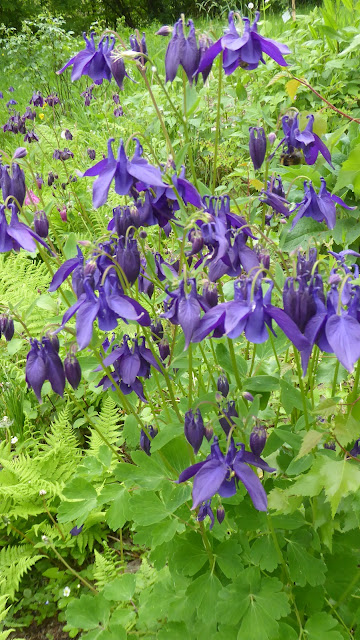 Aquilegias which have grown since I pulled the weed membrane up - probably seeds dormant in the ground for 15 years or so as the membrane was totally perished.  I've never seen such large flowers - about 2 inches across.

Yesterday we drove across two counties for K's appt. with the private specialist.  We got a diagnosis and one is not normally delighted to get the diagnosis we got, BUT there is treatment and we are no longer in the dark over what is happening. It was money well spent and I am grateful for being in a position to afford it. Watch this space.  My shoulders immediately dropped a foot (from around my ears) and I was letting out huge breaths from all the pent-up tensions of the last year and more.

We came back via Ledbury so K could see the Titian painting (The Last Supper - guess who just wrote Breakfast! - I said I was tired) in St Michael and all Angels church.  He was tottering by then - all that time in the car not helpful - just looked for a minute or two at the painting and vowed to come back when he's walking better and can see round the entire church.  I popped into Hay wines to see if the Greek white wine Tam and I love was back in stock.  To my amazement, after a loooooong time with none, it had come in that very morning, and so a bottle certainly had my name on it!

I stopped briefly at a garden centre on the way back, saying to Keith I probably wouldn't be long as last time I was there I came out empty-handed.  The same thing happened.  They had some lovely Clematis with huge flowers - for the best part of £27 each!!!  Trying it on came to mind.  Also a bronzey Foxglove I grew one year at our old home (before it died in the winter) and that was the only thing I might have bought, had it not been priced at £15.99.

We had supper courtesy of the chippy and by the time I got there, it was 6 hours since anything had passed my lips and I was famished.  I can honestly say I have never drooled before, smelling food cooking, but I did last night!  There was nothing bar grease left on our plates by the time we'd eaten!

I slept deeply until 2.45 and was then awake till gone 6 a.m.  Dropped back to sleep until 9 and got up and had breakfast, and then had to go back to bed as I was just so exhausted.  I am officially Doing as Little as Possible today.

Deeply grateful for:  A diagnosis; a beautiful garden; living in a beautiful place; an unending pile of books to read!