"A noted Carmarthen character has passed away in the person of Daniel Jones, better known as Daniel y Merched, who died at the Carmarthen Workhouse  on Wednesday afternoon. Daniel was a native of Pontynyswen, in the parish of Llanegwad and was born in the year 1805.  He is said to have earned his soubriquet (which being interpreted is the girls' Daniel) by the fact that he was bought up by two maiden aunts.  At any rate, he was never known by any other name and many Carmarthen people who knew him 3 score years never knew his legal name.  The most wonderful stories were told of his great age and Carmarthen men aver they remembered Daniel 60 years ago as old and grey as he was this year.  However, we believe that he was only 97 years of age.  He was a tailor by trade, but had led a very unsettled Bohemian way of life; since he was a boy he would spend the whole of the summer and the autumn fishing.  He had also served in the Militia.  He was one of the best trout fishermen in the whole of the Three Counties.  There really seemed to be something almost diabolical in his luck, for he could bring 12 or 15 pounds of trout, when the best fancy anglers in the district could not take six ounces.   He always fished with a worm, and it is said his success is due to his treating the bait with saliva in a manner which would not appeal to the fastidious.  Until within the last fortnight, he looked as well as ever, and was popularly believed to be immortal.  He was a prime favourite with angling gentlemen, as he had a skill in making flies coax the shyest fish onto a hook.  He had latterly spent his winters in the workhouse, and his summers wandering about the brooks and streams of the country with his rod and line.  On Saturday the 21st inst., he entered the workhouse in a general state of breakdown, and passed peacefully away on Wednesday the 4th June." 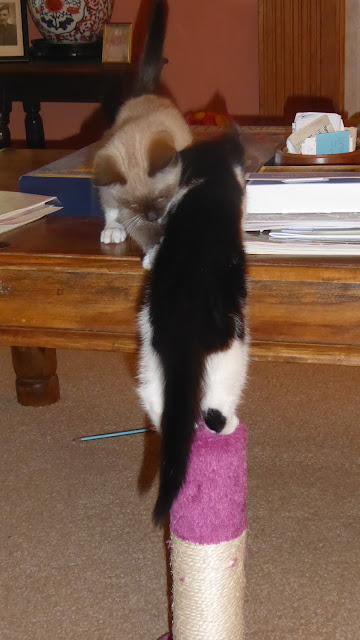 My daughter sent me this clip  from the Carmarthen Weekly Reporter newspaper of 1902.  I can't find him in the Workhouse, I can't find an obvious one that is HIM in the census records, there are lots of marriages for a Daniel Jones, but I doubt he ever married, if he was so footloose and fancy free. I don't know where he lived in Pontynyswen - and I have the census records printed off.  He may have been living in a bender or a barn somewhere.  He was certainly a  fascinating character - they've thrown the mould away of folk like him. 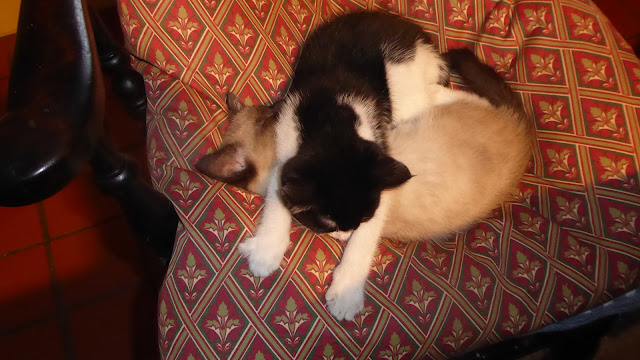 Obligatory kittens photo - they have just been yelled at for turning my legs to ribbons again, little wretches, attacking me from both sides at once!  They're only good when they're fast asleep!!