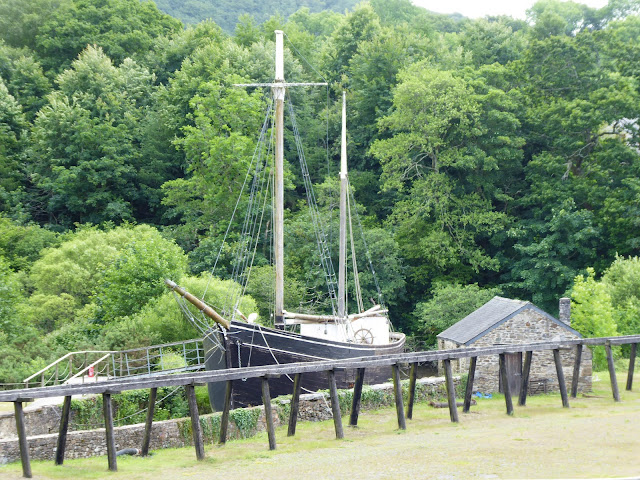 We set off across the moor on Friday morning, heading for Morwellham Quay, which I have wanted to visit ever since seeing the excellent series "Edwardian Farm" on tv, which was filmed here.  One of the first sights was of the sailing ketch  "Garlandstone" which was built in 1905 at Calstock using timber from the nearby Cotehele estate.  She was the last but one wooden sailing ship built in Britain.  She was first registered in Milford Haven, Pembrokeshire in 1909 and sailed around the coastline and across to Ireland, with various cargoes, until the 1960s when she was bought by an American, but a decade later, found abandoned, and was bought by the National Museum of Wales and subsequently moved to Morwellham Quay in 1987.  Looking inside the hold, she was full of mud (following a bad flood in 2012 I believe).  This area has suffered several horrendous floods and there are flood level marks feet above my head on the buildings there. 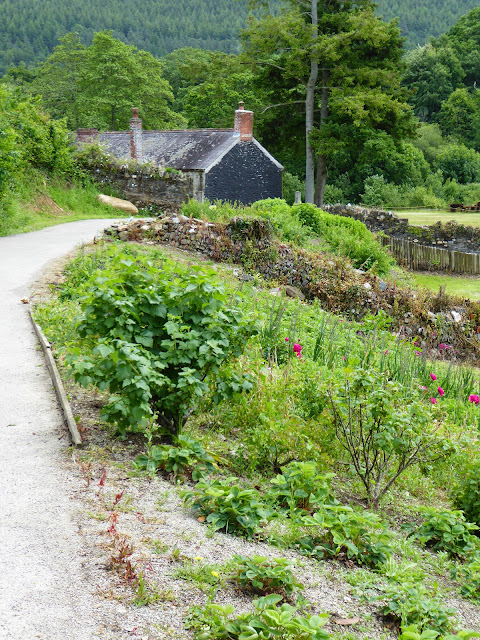 This sloping area is where Ruth planted up Strawberry Plants as since the advent of railways, fruit was sent on the milk train to the London markets.  The Tamar Valley was well suited to Market Gardening, with its fertile soils and the warm climate gave crops a head start which meant they reached the markets earlier than those from other areas, thus making higher prices.  As you can see, some of Ruth's strawberry plants (or their offspring) are still in evidence.

This area once had large areas devoted to fruit trees such as the Cherry, though there is little trace of them now, sadly.

Morwellham Quay was once the centre for exporting copper ore from the copper mines in the area, and also processed Arsonic and Manganese.  The copper went by sea to "Copperopolis" - Swansea, which had smelting works first set up around 1720, by wealthy landowners who had mine holdings in Cornwall.  Swansea had several main attractions to draw these early entrepeneurs there - water (the river Tawe) and coal from local mines.  It also had a safe harbour.  A century later there were 9 smelting works in the city.  The ore ships travelled back to Morwellham laden with lime (which was slaked at the lime kilns which still remain on site) and slate which was used as roofing and weatherboarding. 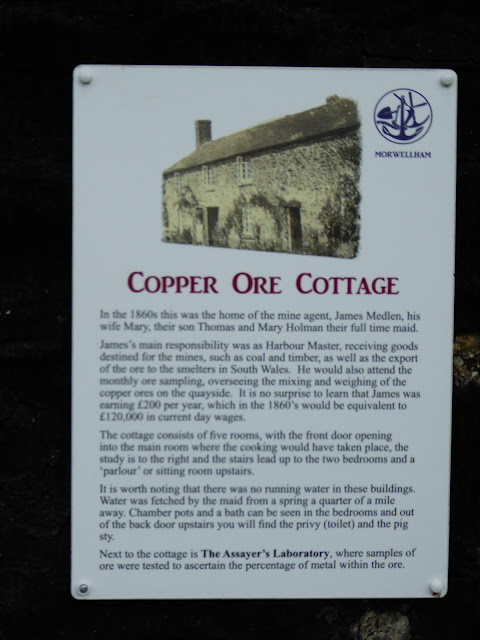 I hope that you can read the information board above.  Basically this is where the Mine Agent James Medlen and his wife, their son and their maid lived.  Beside the main domestic rooms of this cottage was the Assayer's Laboratory (see bottom photo below).   His wage (c. 1860) was £200 a year - that would equate to £160,000 nowadays.  He was a very important man, and oversaw all the deliveries of coal, timber etc for the mines in the area, as well as the testing of the ore, and the exporting of it to Swansea.

At the end of the 19th C it became more profitable to import copper from South America (indeed, our local family here in this parish were the Bath family, who were involved in this trade.)  When the slump happened and mines were forced to close, Cornish miners emigrated in large numbers to wherever there were mines in the world.  It is worth noting that from 1884 - 1902 the copper mines of the Tamar Valley mined 700,000 tons of copper. and it was "the richest copper port in Queen Victoria's empire" (taken from the BBC book "Edwardian Farm").  Incidentally the wonderful word I sometimes use (and my NZ friend Rosie uses a lot) "fossicking" originates from the habit of folk scratching a living from scratching through the spoil heaps of the abandoned mining sites. 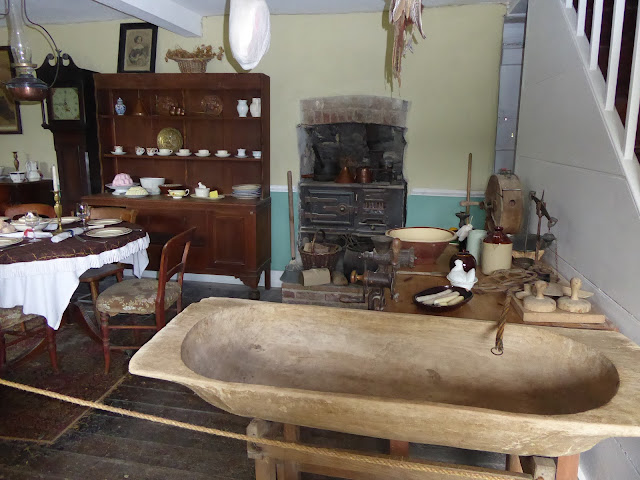 The heart of the home, where the cooking would have been done on the range (presumably the original one?).  The big wooden trough at the front (we sell these on occasion and many of them come from Central Europe these days) would likely have been made from sycamore (which withstands damp and regular cleaning) and would have been where they proved the bread dough.  Just behind it near the wall are a couple of butter stamps, scales behind it (though these don't look like the food scales of the period) and then a cream-coloured earthenware dairy bowl or "steen".  This was generally used for dairy purposes - settling cream to skim off to make butter, or for setting small amounts of dough to rise - whatever it might be practical for.  Right at the very back, the circular wooden implement is a knife sharpener. 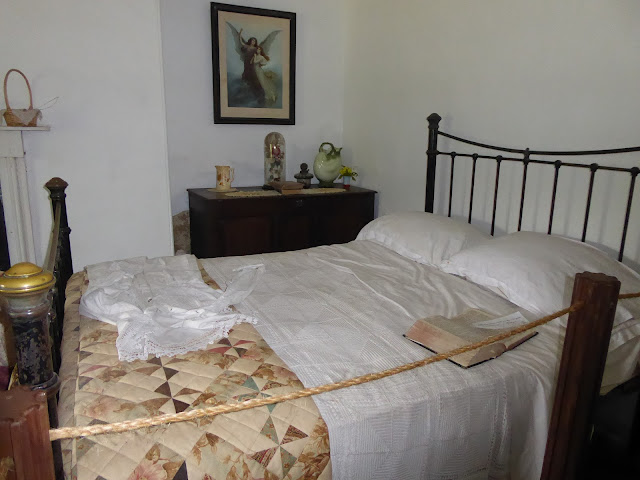 Upstairs, an old iron bedstead just like the one I had as a child, with a pretty patchwork quilt with a pinwheel design. 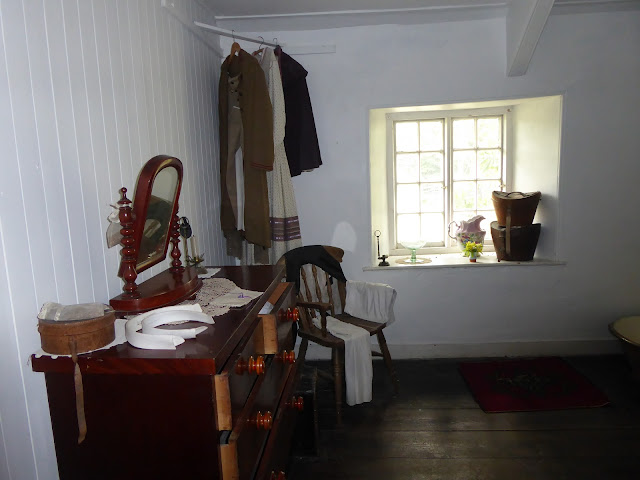 Another of the bedrooms, with the air of the Master's Dressing Room . . . 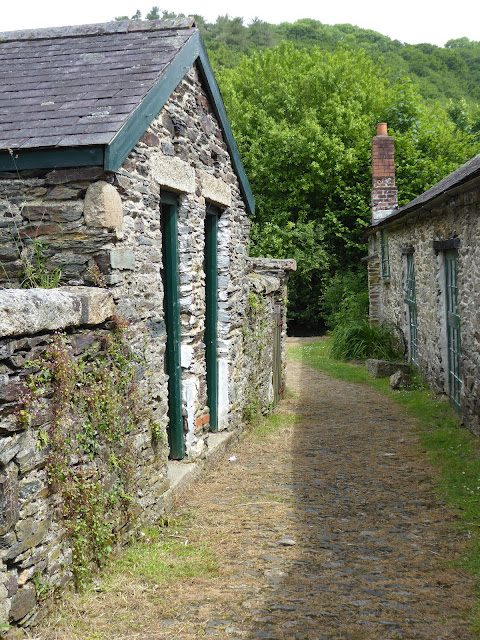 There were pigsties and "useful outbuildings" the other side of the cobbled track at the back of the cottages. 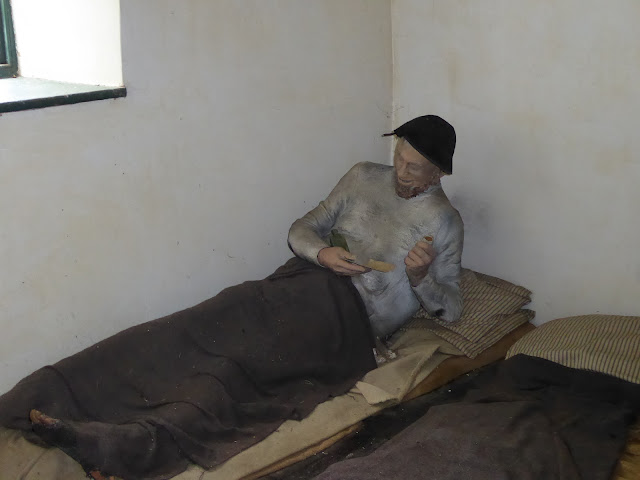 In the 3 small rooms above the Assaying Laboratory was more living accommodation, this time of a very humble kind, as for miners.  A voiceover said that as many as thirteen people were housed in one room, and the beds were of the very basic "palliasse" kind - just an old hessian sack stuffed with straw - I bet that was lumpy - with a blanket over the top for warmth. 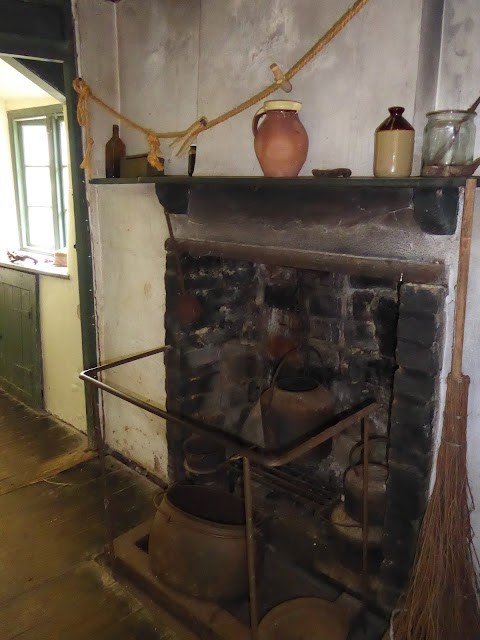 No range in this kitchen - any cooking was done over an open fire and the big cast iron cooking pot on the floor wouldn't ever have seen much in the way of meat - a bit of fat bacon added to the broth when money allowed. 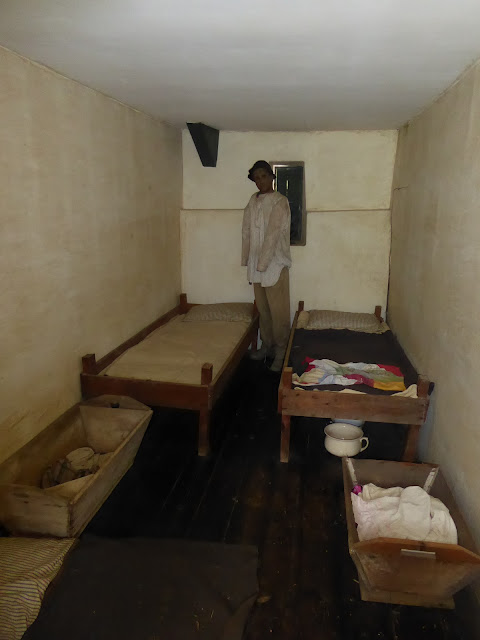 The family's "apartment" with ever decreasing bed sizes down to baby's cot. 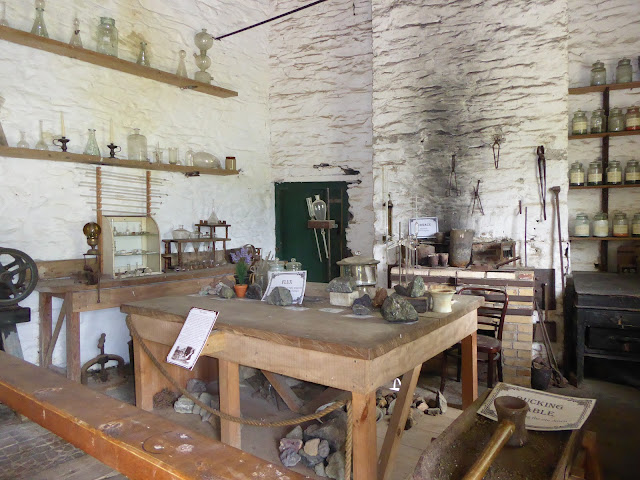 Finally, the photo of the Assaying Laboratory mentioned above.
Posted by Bovey Belle at 05:54