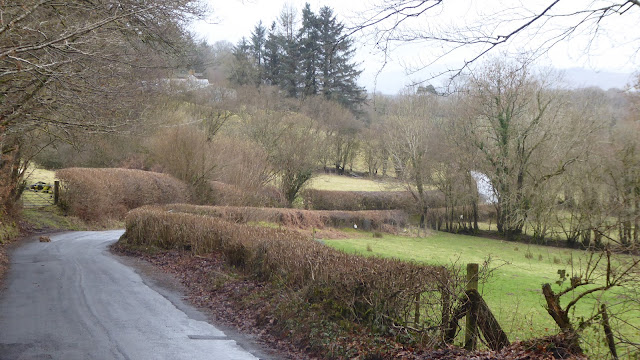 Since having my Covid jab, my lower back has been yelling-out-loud painful.   Painkillers won't touch it.  Tendons and ligaments, upset by lifting in the first couple of weeks we were here, suddenly flared into inflammation.  Sitting for any length of time was not an option.  I pottered around, ironing, tidying, and a short walk to the post box half a mile away seemed to ease it over the weekend.

On Sunday it had eased up enough for me to carefully sit (and get up and move around) for several hours at my computer (which now lives on the kitchen table - no room for an office here) and dive into Ancestry, researching the history of the Big House next door, and the cottages the other side of us, and trying to work out when this house was upgraded from a small 17th C carriage house to something twice the size and habitable.  The Big House next door (17th C) was rebuilt in 1891, so I imagine the improvements here were carried out at the same time, but other improvements done well into the 20th C.  We have a Georgian door into the kitchen (no longer used) and I imagine that a steep staircase once led from where I'm sitting up into what is now the bathroom.

My daughter came in and remarked I was in my element, as indeed I was, I love to research and follow up leads and discover things.

The Ancestry foray led into a link which took me to an on-line copy of a 2-volume History of Brecon book from Victorian times, all sorts of snippets of information which have become forgotten down the years.  House names altered, abandoned dwellings became working farmhouses again, other high-status buildings disappeared completely as the families who owned them died without issue, or married out of the area and the dwellings fell into disrepair and were then robbed for building other houses.  I got a good feel for this vicinity, and was amazed that John Wesley was a regular visit to our local church, where he leapt onto a fallen tomb to preach, and he married his brother to a gal from a respectable local family ("it was a solemn day, as became the dignity of a Christian marriage".  Gosh, no booze-up afterwards then!) 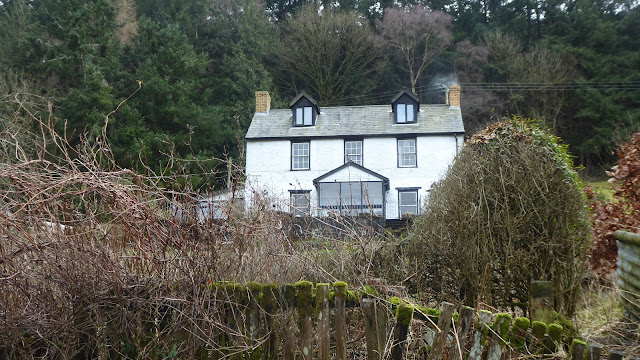 Anyway, I was heard to say yesterday morning that as I couldn't sit, I could at least walk and that had freed up my back the previous day, so Tam and I planned a longer circular walk.  These photos illustrate the route. 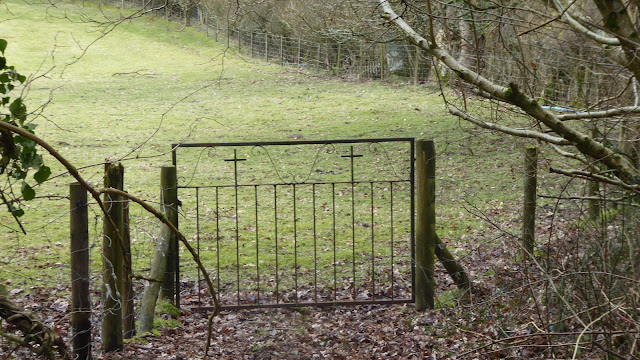 My back, however, was not co-operating, and although the middle lower back was a bit better, my hips decided they would really play up next and by the time we had gone a couple of miles I was regretting saying, at least I can still walk! 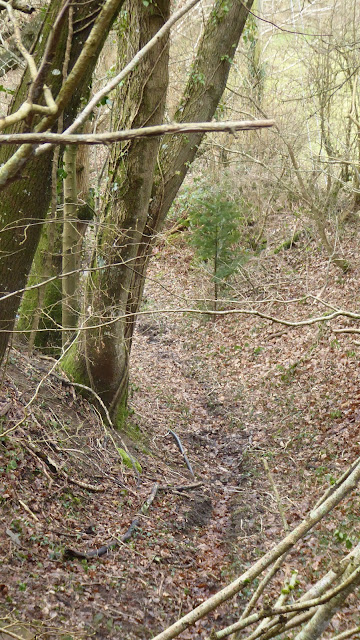 The gate above, with its Christian crosses, and this ancient and deep holloway both lead to a small church dedicated to St David - although there was an earlier dedication to a largely forgotten and unusual saint.  It was "rebuilt" (or at least, extensively renovated) in Victorian times.  A lot of churches seemed to be renovated or "improved" then, not always to their historical advantage.  Anyway, this wee church is approached across the fields or down the holloway and we will visit it when it is a little drier underfoot.  It is still in use, but only in the summer months . . . 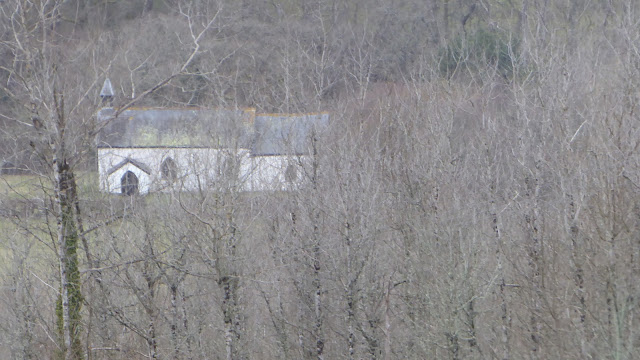 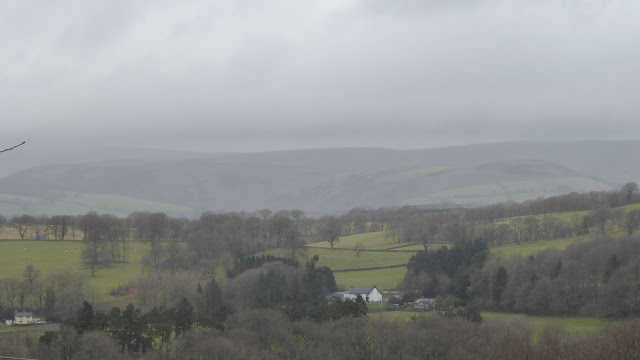 We left the lane and began to climb through mixed woodland, along a bridleway, and that was when my hip to leg tendons/ligaments at the front really began to complain.  How I wished I could be on my darling horse at this point, as he would have relished this hill and going off piste!  Still, the views were worth the climb (about 250 feet, heightwise). 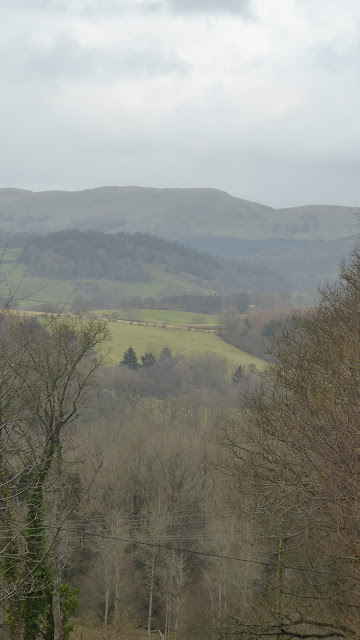 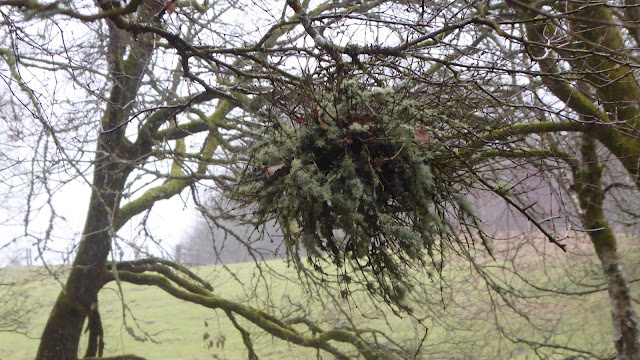 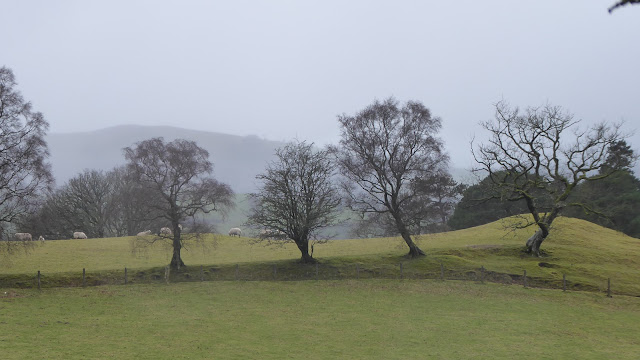 At the top it opened out into rollicking fields and the beginning of the Eppynt range behind. 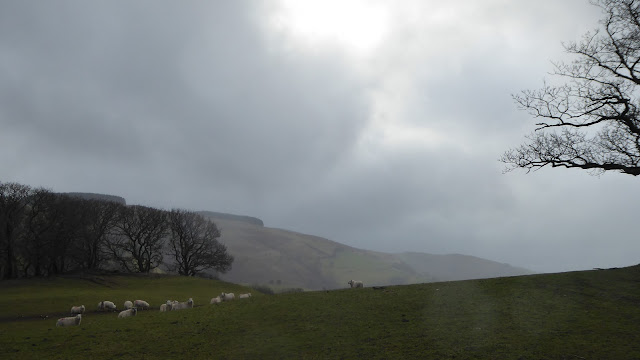 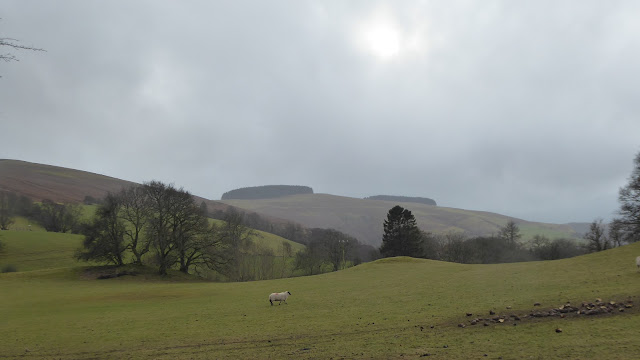 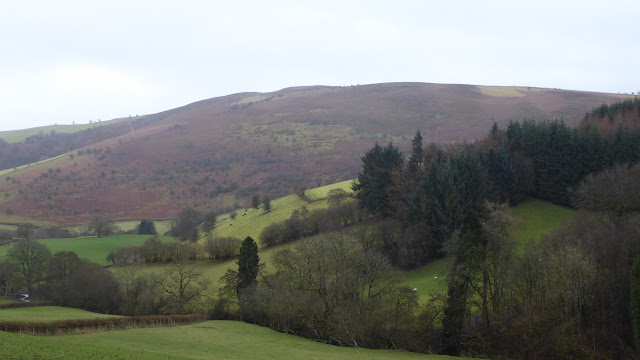 We walked about 4 1/2 miles and I was fit for nothing when I got in, but today everything has eased up a bit and hopefully I have seen the worst of this bad back business.   I daren't lift anything though so Tam will have to take the next load up to the attic . . .
As you can see, we have fabulous walking country on our doorsteps - just wish we had moved here many years ago so I could take better advantage of the walks.  Never mind,  I will do my best!