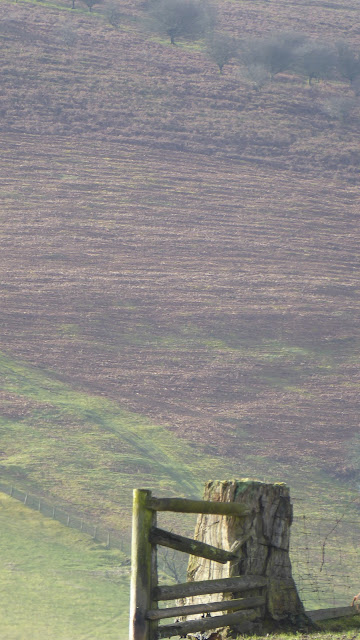 These first three photos came from an early morning walk with Keith, up the hill to stretch his legs.  We've been going up there most days this week to improve on fitness. 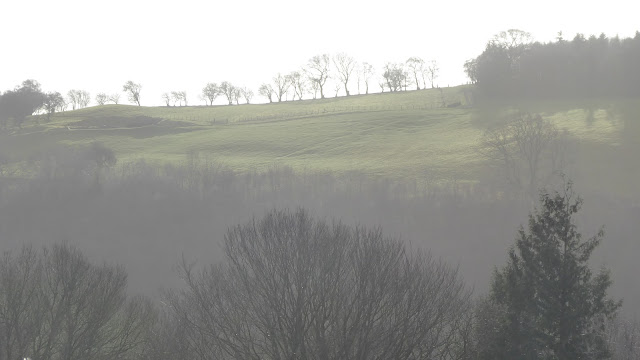 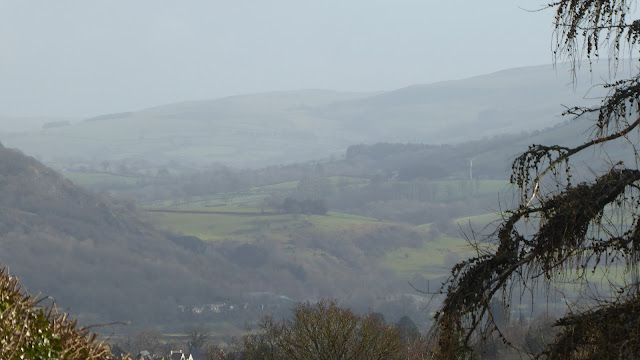 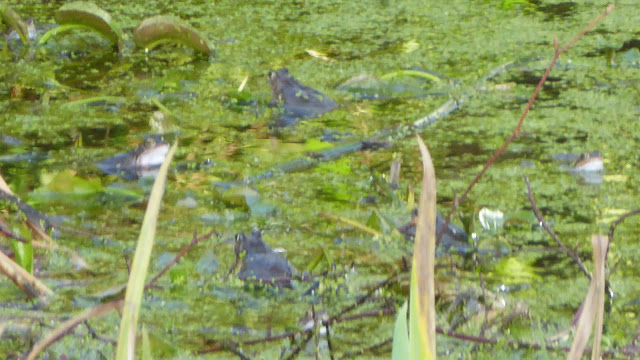 Last week I was wondering where the frogs and toads were - we used to get them earlier at our last home, even in January sometimes, and their frogspawn would get frozen, but still thaw out and hatch. Yesterday I noticed that our pond here was absolutely HEAVING with amphibians in a high state of lust.  It was like a Froggy Bordello!!  Here below is the result of their days and nights of passion, so far.  It's mostly frogs in there, but I've seen a few toads at the far end, and when the light was right the other day, lots of Newts too.  Pleased about that. 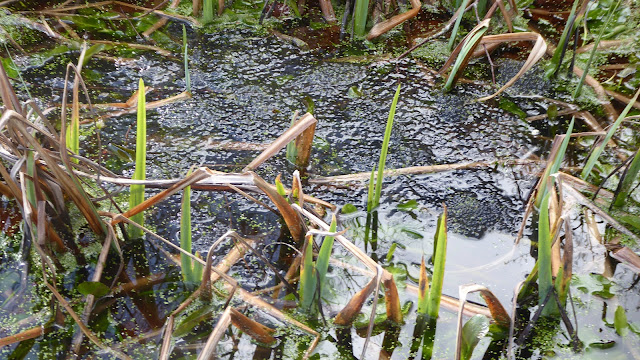 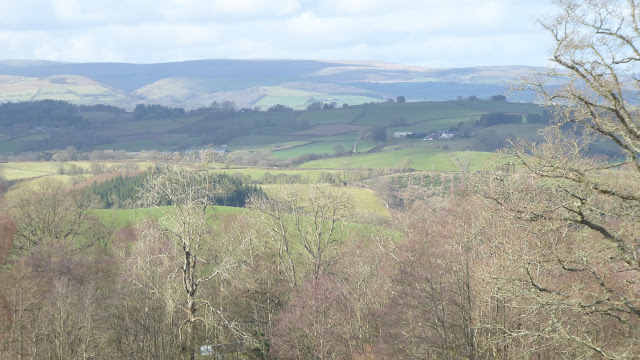 I did some gardening this morning and put in another couple of roses up on the bank.  I  thought I had planted Roserie de l'Hay the other day at the side of the house, but then found it was The Lark Ascending I had planted.  So today, Roserie de l'Hay DID get put in, on the bank overlooking the stable yard, which has some nice small shrubs and trees in.  First though, I dug out and replanted (at the back) 3 clumps of grass.  I have a suspicion it is Pampas grass - if it is I think it will go for a further walk . . . hate the stuff.  I also planted Boscobel a little higher up and further over, and gave both plants a feed and a good sprinkling of DA Microcryzome on the roots. 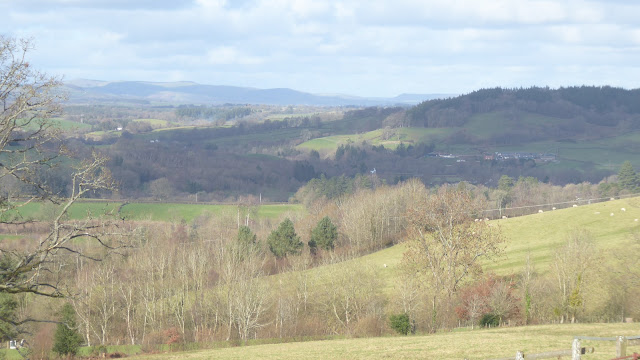 I also got busy with the storage cupboard upstairs, where much was bunged when we first arrived.  It needed sorting out, and anything still in a bin bag taking out.  So now I have all Tam's bed linen on one shelf, the overflow of ours (all the king size bedding goes in the coffer in our bedroom) and sheets on the next, and some other quilts now put away in the coffer in the guest bedroom.  Getting there, especially as stuff still in boxes in the pink bedroom is slowly being tidied away in under the bed box storage. 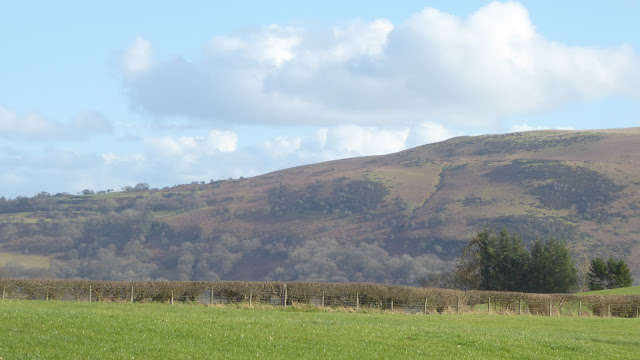 Then Tam and I had a walk, the one across the fields and back along the lanes that we did when we first arrived here. 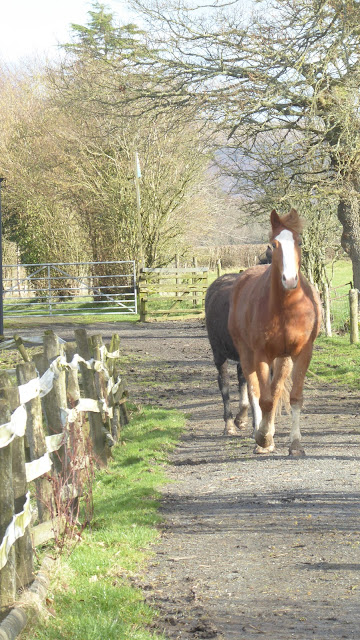 The two Hanoverians were turned out again - when we met them a few weeks ago the chestnut was hopping lame and awaiting the vet. 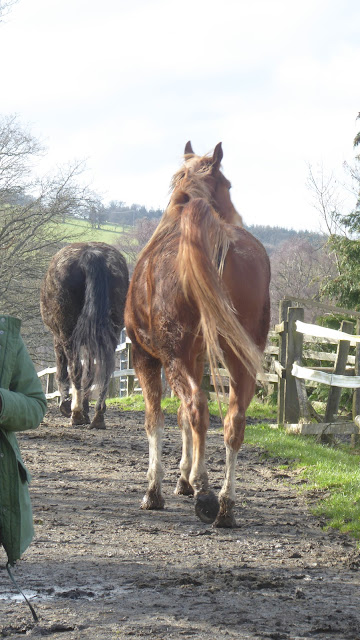 The brown-black horse in the front is 21, but the chestnut only 5 and full of beans!  After being made a fuss of by us, they headed into the next field and we heard the sound of much galloping!

This funny-clouded picture was the result of my trying a panoramic scene.  The views up here are just AMAZING. Pretty well 360 degrees. 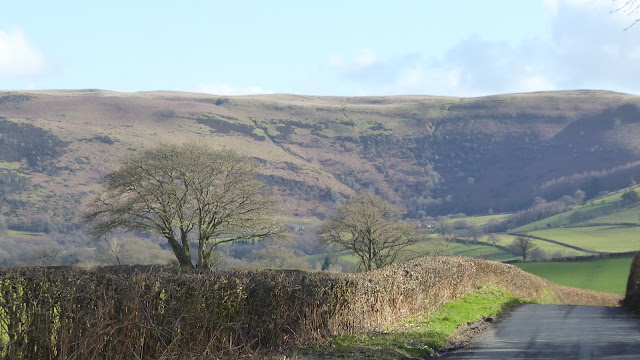 We reached the road again, and this is looking in the general direction of Brecon - though that would be quite a hike as it's about 15 or 16 miles away on this route, and even further on the main A road out of Builth.  Tam and I want to go exploring along those mynydds in the summer. 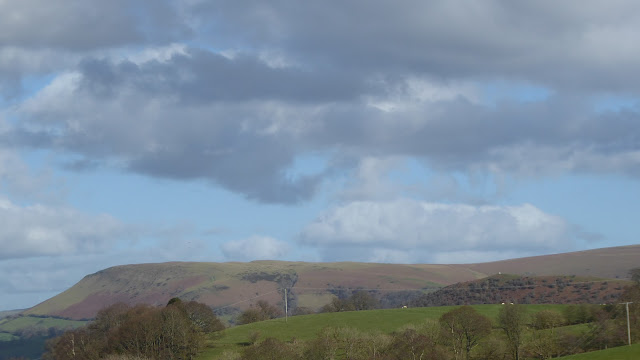 Looking more northerly, this is the Aberedw, another one to explore. 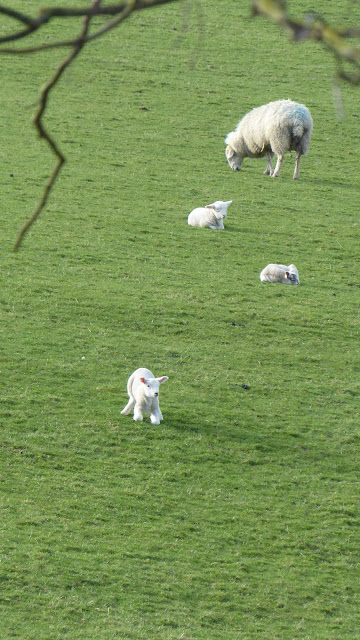 These lambs were born when the Beast from the East was here (what a welcome to the world) and then had to endure days of heavy rain and wind, but now are enjoying some sunshine for a change. 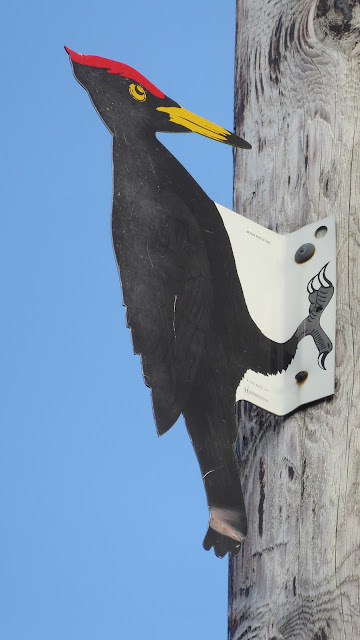 I did a double-take the first time I saw this, as it is made of metal and quite large.  I think the nearest thing to it is a European Black Woodpecker  -   here's a link to a post about it.  I assume it is to scare other woodpeckers away - ones who might have ideas about pecking the telegraph pole, so they must have problems with this!

Just as we were climbing the hill, Tam and I were looking at the leaves of various wild flowers showing in the hedgerows and on the banks.  We had just found some well-grown Aquilegia leaves, and were saying, it is going to be an early spring, when a man's voice from the garden above us agreed!  I said, "Hello disembodied voice" and thus we met another - very friendly - neighbour.  On each of our walks we have met a neighbour, and they are all really friendly.  Can't wait until Lockdown is done with and things are safer again and we can get to know one another better.

All in all, another LOVELY day here, which ended with a fabulous evening chorus of birds - some of them unfamiliar to me.  We are so fortunate.