Positives and negatives and the cats explore 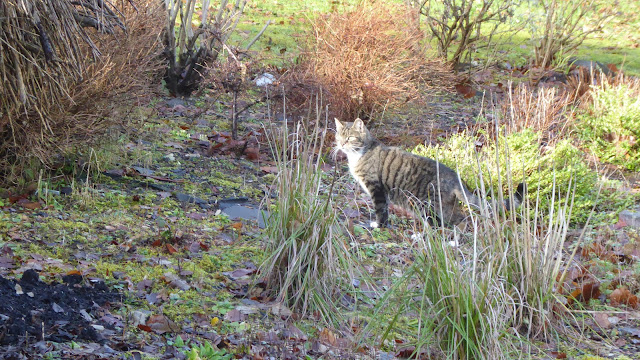 It was like a spring day yesterday and we had to have the front door open to remove Tam's old mattress (VERY ancient and desperately in need of replacing).  She had bought a new one - a reconditioned Emma mattress.  They are MUCH cheaper than buying it from brand new - people can buy and use for up to 100 days, and if they are not happy with the mattress, they return them and get their money back.  The mattress is then refurbished, recovered and sold.  Oh my goodness, they are SO comfortable and to cut a long story short, we will order one too (reconditioned) for our new bed.  Then our current mattress can be used with the pine bed we bought recently and which is going into the Guest Bedroom when our new base arrives this month.

It sounds like we are spending a lot but certain things were left to replace until we moved and we DID have to replace our big Gothic bed.

Today we found we found we had more to pay out as the replacement UV glass bulb was NOT the answer to our flashing controller which told us we needed to replace the bulb.  Danger it said!  Turns out that the controller has gone caput, so we have to drive and buy its replacement tomorrow.  That is not the end of the UV problem though as we desperately need to replace the sediment filter, but cannot do it because both the internal and external stop-cocks need replacing as they barely move.  They must have been like this for YEARS so no wonder the sediment filter was so filthy and there was a note on our tap saying "BOIL drinking water!" 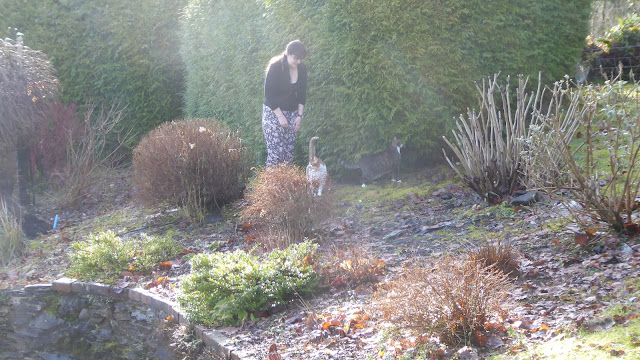 As you can see from the photos, two of the cats got to explore a bit outdoors yesterday - the bravest ones, Theo (who was very keen to explore) and Alfie.  They loved it out there and would have explored a lot more.  Little Whale decided Outside was Too Much for Him at this moment, and Ghengis just slept all day.  We have bought two cat flaps (for the front door and the door from the hall into the kitchen) so those will get fitted soon - outer one first so if someone escapes they can get back in, and then once we can see they are happy to come and go, we'll fit the middle one. 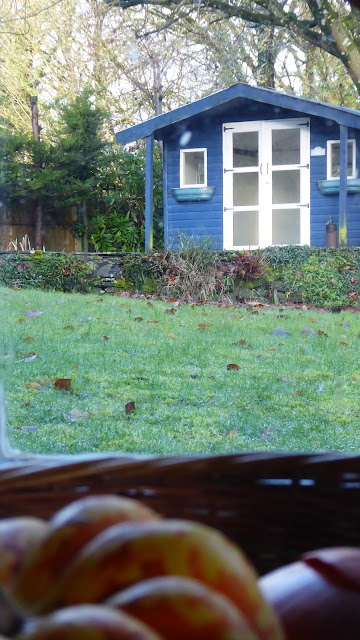 Above and below: as you can see, my eye-level for the garden from the kitchen is just out of the window and it's lovely.  The house has been dug out all the way round and a wall holds in the lawned area.  No area of the ground touches the house, though you can't see that clearly in the photo. 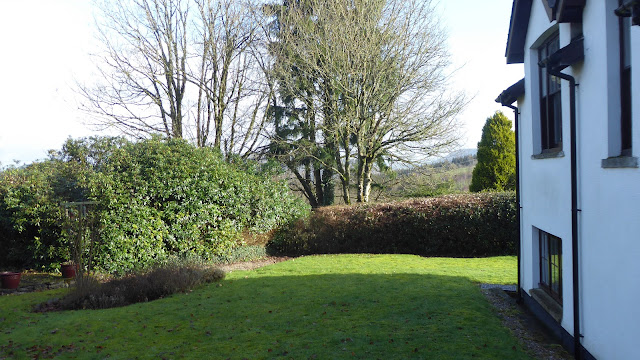 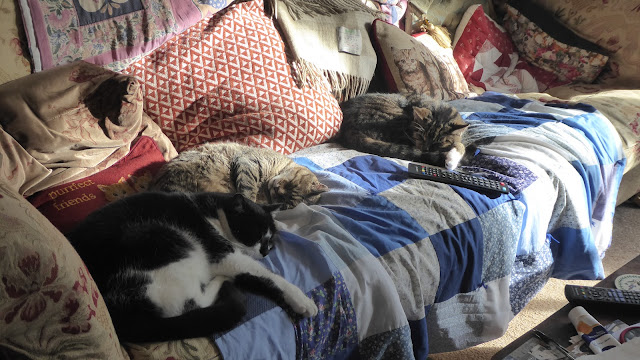 Soaking up the sun - the living room faces South. 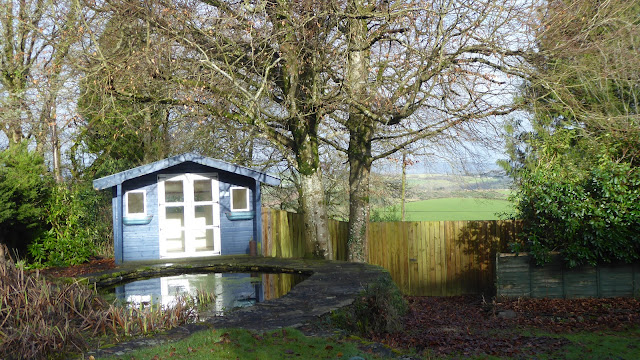 The view across the garden to the pond and Summer House and the fields and hills beyond.  You may just make out the door in the fencing which leads through to a rough triangle of land beyond, which is also ours. 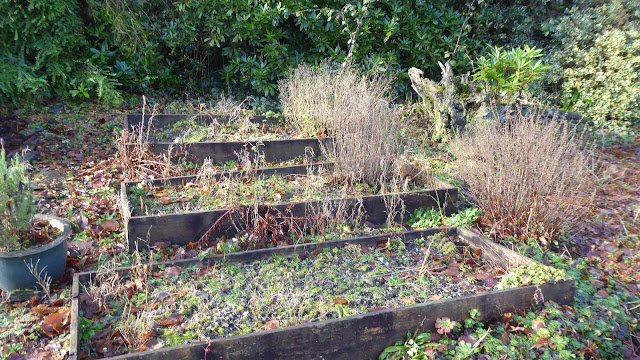 There are four little raised beds like these which need weeding and feeding and probably raising a bit more and then we will grow some salad veg in them.  Current occupants are Marjoram I think.  Something herby anyway. 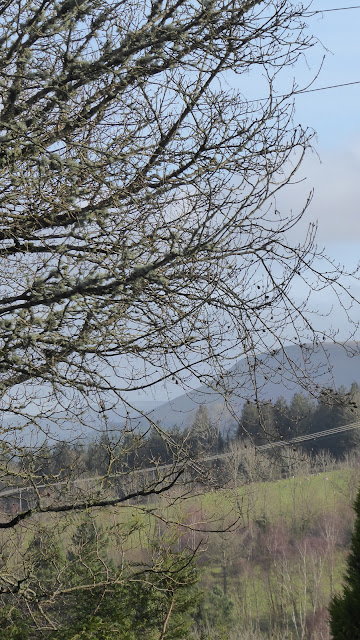 Above: view from the bathroom window, and below, the view from Tam's side bedroom window.  (She has a dual-aspect room). 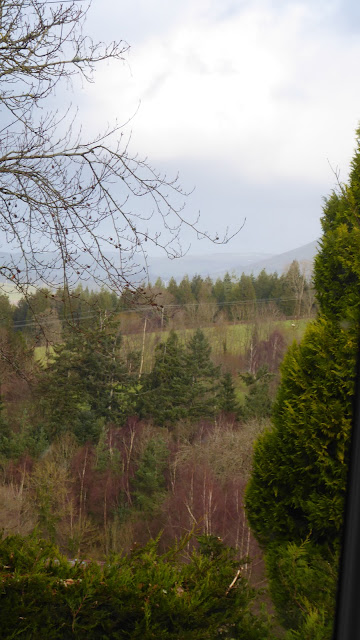 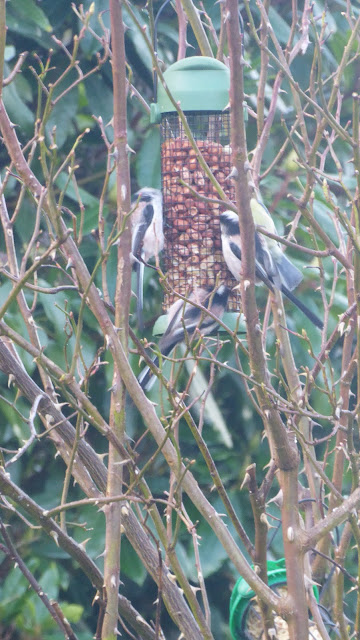 Three Long Tailed Tits on the peanuts.  Lovely to see them in our garden.  They also visit the other feeders too, which are at the front of the house.

We got lots of small jobs done yesterday.   I found that small areas of damp on internal walls were due to blocked drains (as I thought).    One is an ancient (Georgian?) earthenware soakaway type drain which would have gone under the stable cobbles in a land drain.  'Tis a rare thing. It is still blocked in the land drain area as the seepage bit is very shallow, so I will have to try some caustic soda and see if that works, otherwise it needs a pressure hose used on it.

I even did a wee bit of gardening, and weeded two big glazed earthenware planters at the rhododendron end of the garden.  The former owner left me all her glazed pots, which is great, but I shall probably rehome 2 of the four big pots of sage as they would be better planted with something floral.  If I could but find my secateurs, I could really make a difference, but have to find the Gardening Box first!