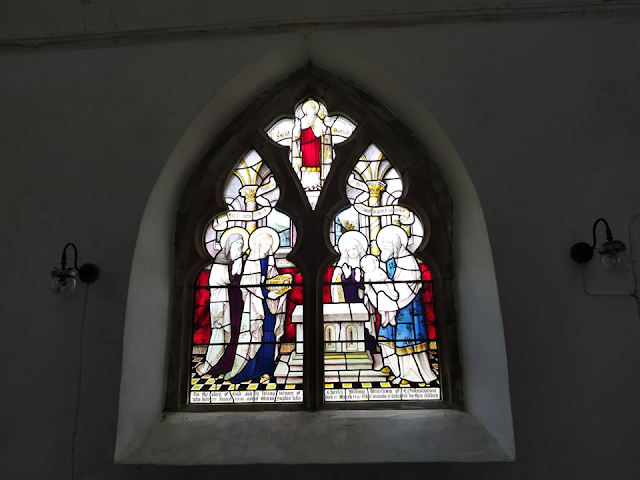 Our son D visited on Saturday - staying slightly longer than planned after his train back got cancelled, so he had to catch a later one.  This gave us time a get a good walk in, down to the wee church, which he'd not yet seen.  This is one of the stained glass windows.  The lights either side are the original gas lights from Victorian times.  No electricity here! 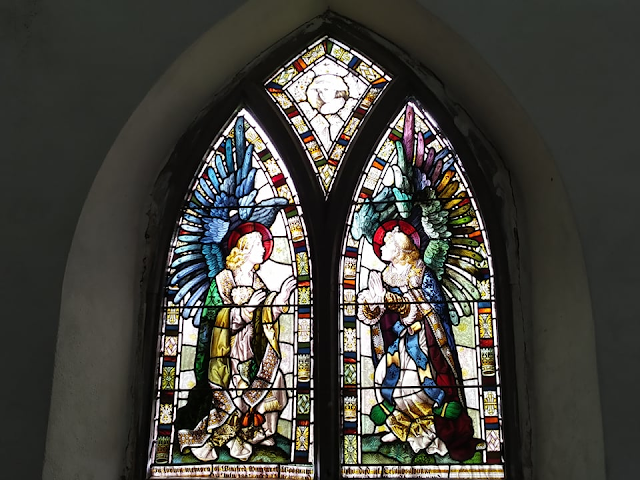 The sun was bright through this window but if you look carefully at the top roundel between the angels, you can just see an almost photographic image of Winifred who, poor girl, died when she was only 13.  Next time I go there I will try and get a close up - this was with D's phone.  That left hand window glass has buckled at the bottom and is slipping down so I am hoping that the generous collection recently will help a little way towards the repair on this. 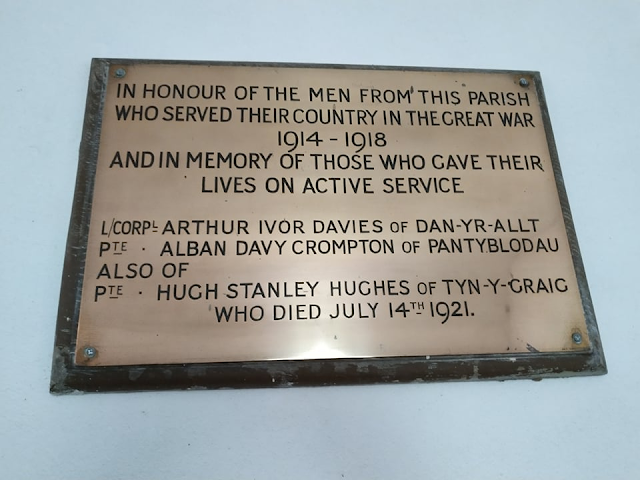 Three young men from the parish, who died during WW1. Lt.-Cpl. Davies was local (I often walk past the house) and died of wounds aged just 20 on 4th December 1917 in El Quahira, Cairo.  He was in the Royal Welsh Fusiliers.  His father was a local farmer and he was one of 8 children (they all survived to be adults).
Alban Davy Crompton was a Cardi (Cardiganshire) boy.
It looks like he was a Rifleman, and he's mentioned as dieing, aged just 18 (SO young) 12 April 1918.  He is buried at Vielle-Chappel.  He must have been working at Pantyblodau farm when he joined up, though the 1911 census still places him near Newcastle Emlyn.
Private Hughes didn't die until 1921 -I am wondering was this of wounds or mental problems? (P.S.  My husband said it could have been the effects of the mustard gas).I was intrigued, and decided to research him.  He was one of a big family.  Through the 1911 census, I found out his mother had given birth to 13 living children, but 3 had died prior to 1911.  She was born at St Harmons, well before the short time that the Rev. Kilvert spent there though. Her husband had been a Farm Bailiff in the 1901 census and they lived in a nearby farm, the track to which is where I always stop to draw breath after slogging up the nearby hill.  Two of his sisters, Catherine and Mabel Jessie, became school teachers, presumably at the little village school which was closed around 1964. By 1911 she was widowed, and reduced to earning her living as a Charwoman and had two children named William Gilbert under her roof - one her son, who was 13, and the other was a boarder, surname Jones and born in Merthyr.  He was only 9 mths old and I wonder if he was her (illegitimate?) grandson . . .  The duplicity of names surely means a blood relationship.  Anyway, I have wittered on long enough on that topic. 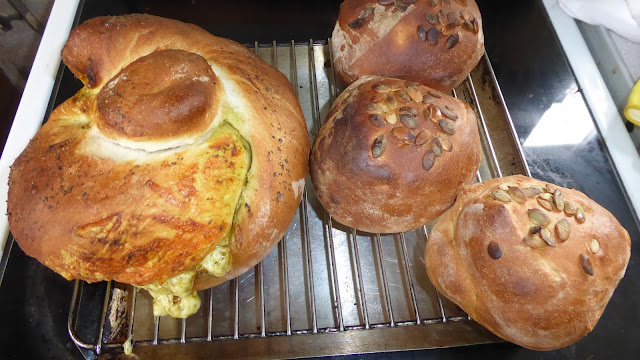 As D was staying for lunch, I put some bread on a dough mix in the breadmaker, took the dough out, and made 3 breadrolls with half of it and a quick tear-and-share type loaf with Cheese and Pesto.  It was SO tasty.  D took the rest of it home with him along with half the Chocolate Blackberry Brownies, pictured below.  They are SO nice and I just nipped across our lane to pick the last few blackberries on the bushes there (the rain had done for many of them.) I need to go further afield to pick some more for the freezer, though there's not a lot of room in there as it's just the top half of the fridge-freezer. 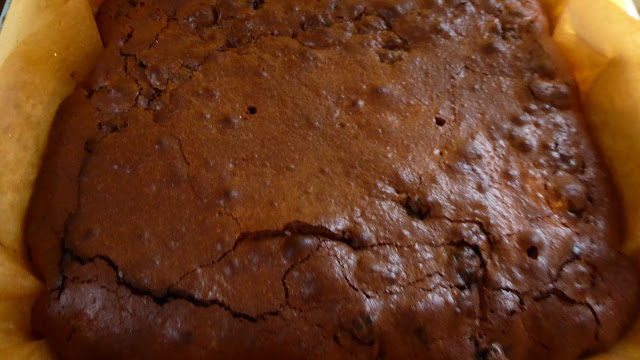 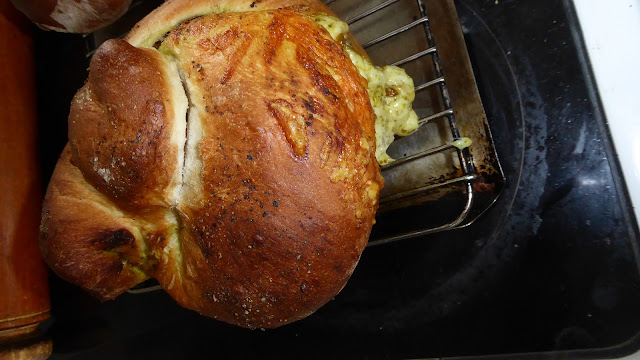 For the loaf - standard white loaf mix dough, roll it out, spread with some pesto, sprinkle with grated cheese (I used about 4 ounces (115 g) of Cheddar) and roll up and tie in a knot, then glaze with egg or milk and stick in a hot oven for about 25 mins. 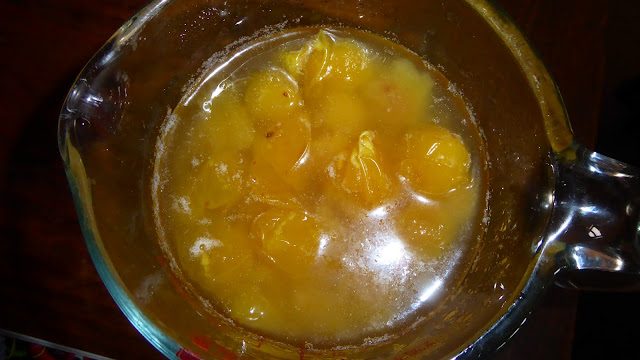 These are the little free Mirabelle plums I foraged in Brecon on Monday, stewed up to go with some Plum Muffins I made yesterday.  These turned out a little sad-looking - they didn't rise much as I only had 2 eggs and the recipe called for 3, so I added some stewed apple to replace the egg and was over-generous with the apple!  They taste fine though. 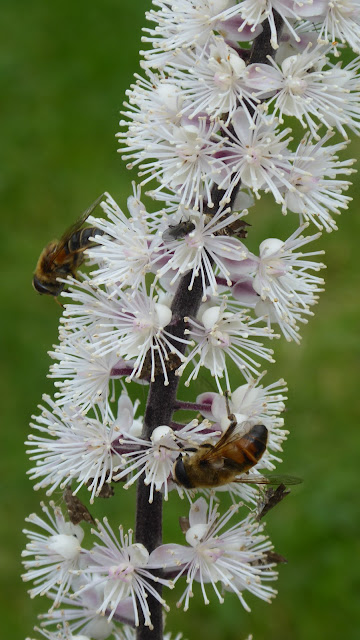 Insects LOVE this Actaea simplex.  It will grow considerably over the next few years so I will have happy insects - the entire garden seems geared towards them. 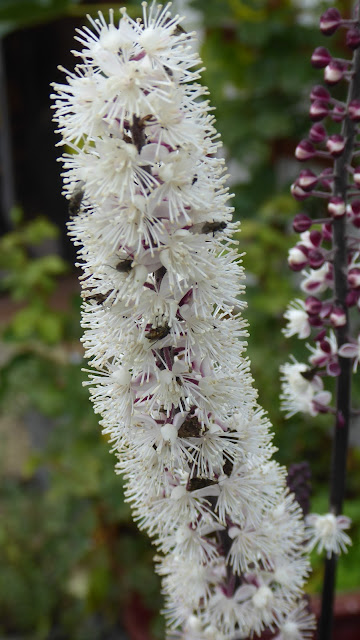 Yesterday I had a visit from a friend and her son, who called to collect the big Gas cannister we no longer had a use for - I can't use the little CI gas stove in the kitchen due to my asthma (plus it was somewhat condemned by a workman here who knew it and said it sooted up rapidly).  We had a good natter, tea and cake and showed them round the house and garden.  They reckon we have a lovely house here.  We agree!
Right, better get on with my day.  Have a good one.
Posted by Bovey Belle at 01:08