Getting Christmassy and Carolling with Norman Goodland 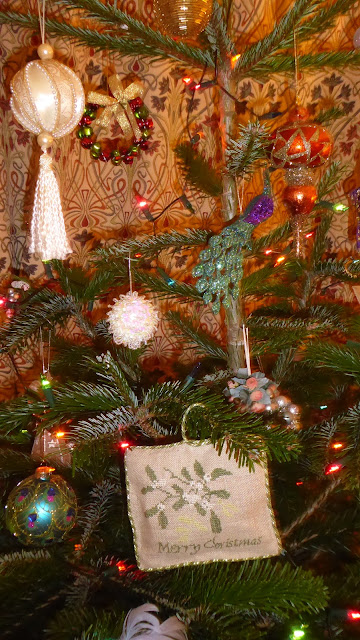 I am glad to report I am back in the land of the living again now, after that blip in my health.  I'm taking stronger anti-histamines for a few days in case it was caused by an allergic response to mould spores from mouldering leaves and I've not been overdoing things.

Yesterday we finished dressing the tree and finding new homes for the Christmas meece family now that the furniture they used to sit on was sold with our old house.  I even found a new baby meece (I know the singular is mouse but they are meeces to me) in a shop in town when Tam and I were doing last minute shopping.  We have some nice gift shops here. 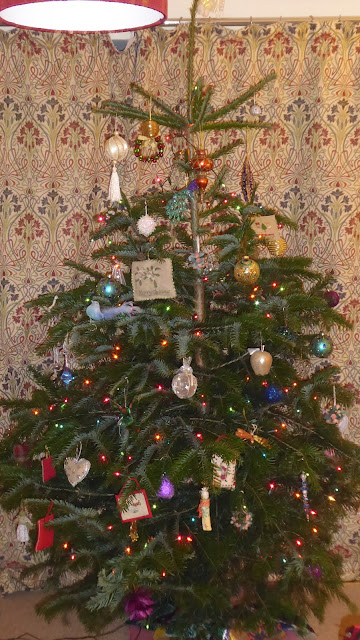 The tree is a nice one, with all our favourite baubles on it, collected down the years.  When the children were smaller we used to go to Salem Christmas Tree Farm and choose and cut down a tree and go in and each choose a special decoration. There are also a selection of x-stitch decorations (designs from Just X-Stitch, the American x-stitch mag I bought probably 30 years ago) which are special to me. 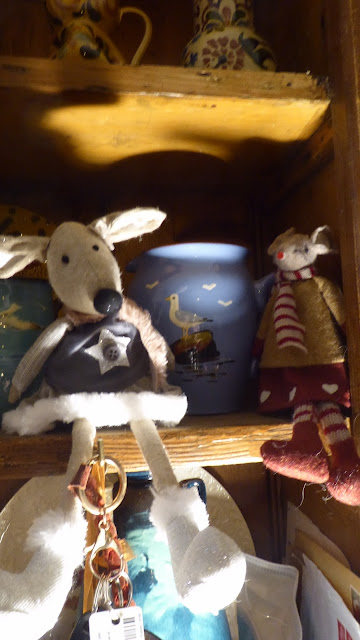 The new "meece" is the little one on the right.  I couldn't resist, and our nearest TK-Maxx (where I got the others) is in Carmarthen, over 50 miles away. 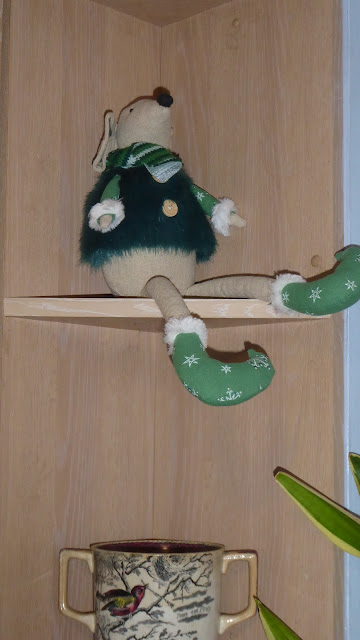 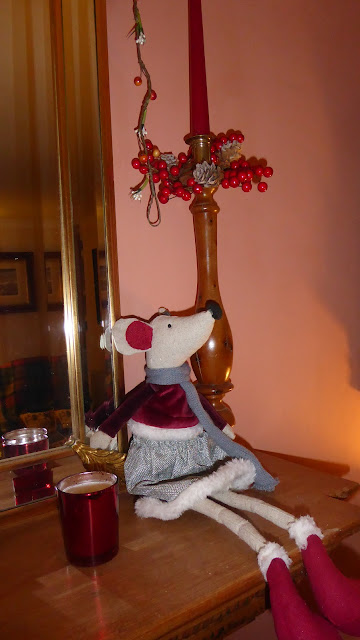 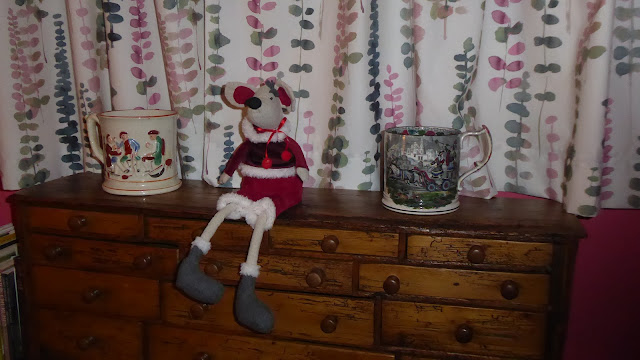 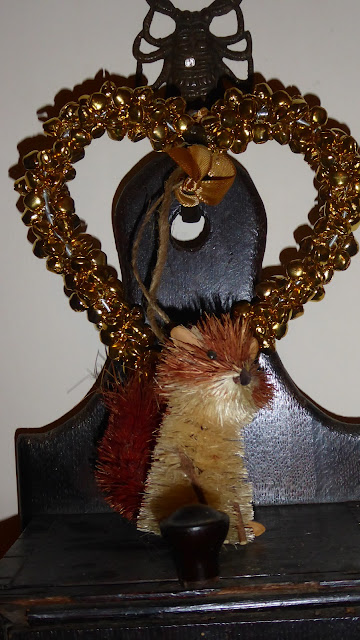 Foxy-loxy has come off the tree this year to decorate the old candle box in the kitchen along with a little jingle-bell wreath.

Yesterday we had the local carpet shop out to measure for two carpets and quote for the lino laying.  We're going to the shop tomorrow to choose carpets but have already decided that we will have a similar silver-grey in the bedroom here we had in our last home.  It goes well with the blue.  The other carpet is for the Library and will be a Berber style carpet in a neutral colour which won't show muddy pussycat paw prints!

So, not a great deal happening here.  I still have a couple of letters to write and things to organize, and house insurance to sort out.  I am trying not to think about the marathon clear out necessary in the Library in January, to lay the new carpet . . .

I've been looking back through past Christmas posts and will share this one with you, from my Hampshire roots.

A piece by Norman Goodland today. He was a well-known writer and broadcaster. I remember him well from my Hampshire days, and he captured Hampshire countryside and the folk that lived there, perfectly.

'Carols is funny things!  They bain't all to do wi' Christmas!  if you don't ring 'em out proper, they might not answer the door, nor gie thee nar 'apence!'

Foster Father was delivering his annual lecture tol the Baughurst bell-ringers, of whom he was Captain.  They practiced in Foster Mother's scullery, on the handbells.

I remember them - big bewhiskered men, shirt sleeved and leather belted, standing facing each other in a double row.  Flashing up the brass bells.  Checking the swing with broad thumn, to make them 'speak' in their clear, lucid tones.  It was all taken very seriously.  Standards were high; they had to be, to impress the gentry upon whom they called.

They walked from Baughurst to Wolverton, back through Ramsdell and Pamber End, and home through what was then know as the 'gypsy' village of Tadley.  Or made their way up to Heath End, aiming for the high spot of the season - Aldermaston Hall.

'We had to watch they sarvint galls!' Father once told me. 'They was always up to mischief!'

'We was invited up to the hall oncest.  We 'ad to go in through the back, an' through the kitchens, y'see.  An' we left our 'ats in the kitchen along wi' they gals.

'We went in and give a tune or two to the Master and the Mistress, and them as was there.  They gie us a sovereign!  They told us to go back to the kitchens and Cook would gie us a drink.

'So we done that.  And when 'twas time to get on, they gals was round the door away from the light.  An' they wouldn't gie us our 'ats until we give 'em a Christmas kiss.

'Waal - you never put yer 'at on inside a gentleman's 'ouse, luk.  So we put 'em on outside in the dark - so we didn't see what was gwine on. Anyways.  We went on down to the Hind's Head, t'other end o' the street.  We went in, took off our 'ats - an' everybody started to laugh! We didn't know what to make on it!  'Til we looked at each other - an' then we seed we 'ad white 'air - like a bunch of old men!

''Twas they sarvint gals!  They'd put flour in our 'ats - whiles we was a-carollin' for the Master!'

Father and his bell-ringers faced some competition from other Christmas and New Year rounders - the village bands of the time - The August Hill Drum and Fife Band.  The Temperence Bands, one from Tadley, one from Baughurst.  But it is said at the end of their rounds, the Temperence Bands were no more temperence than Father and his bell-ringers, when they came to clanking up the garden path well after midnight, to collect their bicycles and wobble their ways home! 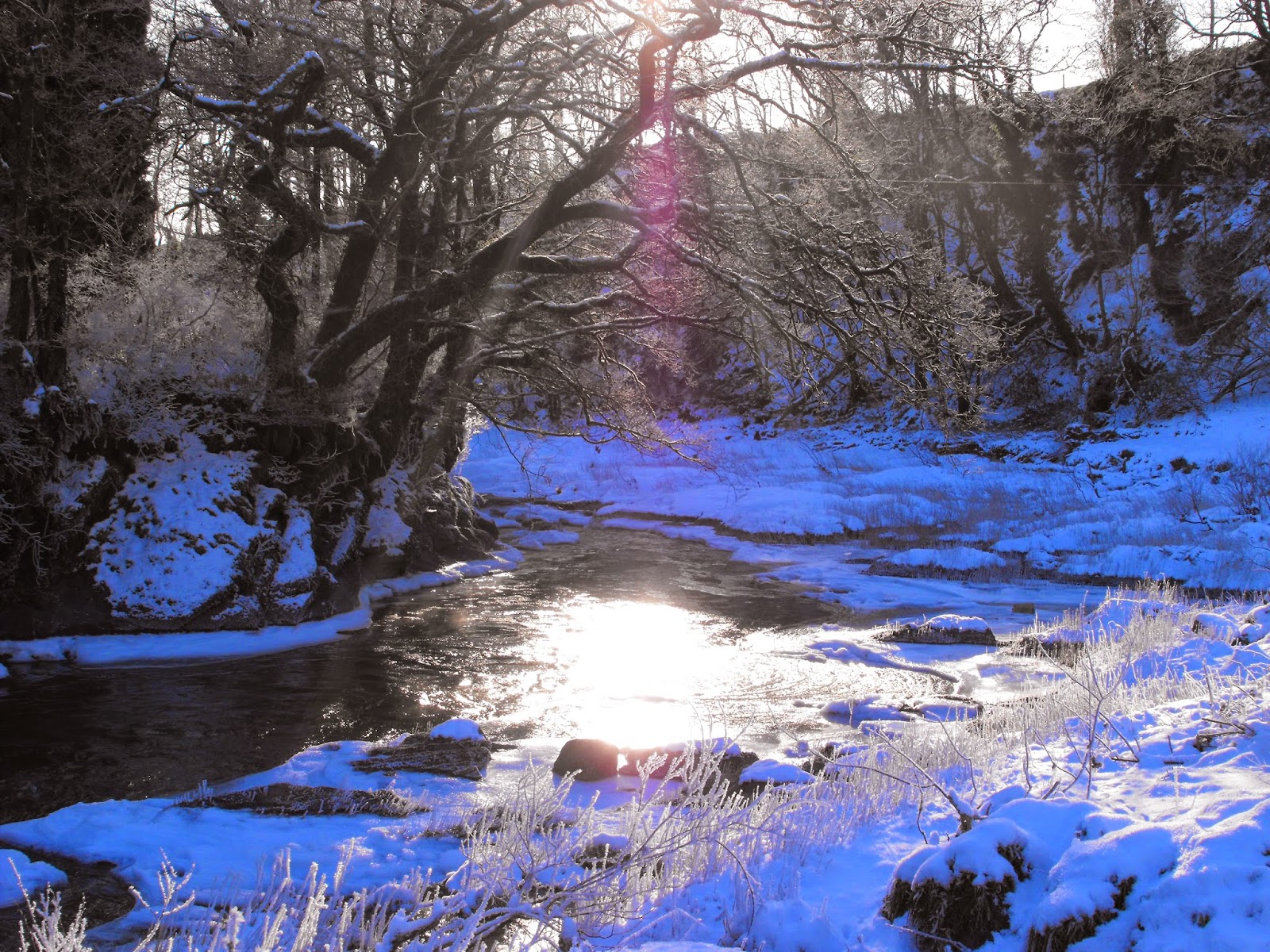 Snow by the River Cothi.
Posted by Bovey Belle at 00:16