From Under The Greenwood Tree, or The Mellstock Quire  . . . 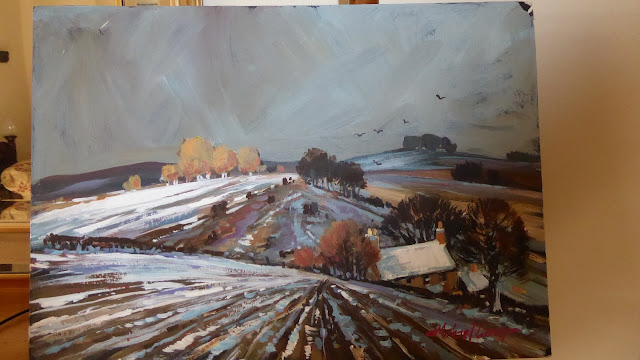 The cider-mug was emptied for the ninth time, the music books were arranged, and the pieces finally decided upon.  The boys in the meantime put the old horn-lanterns in order, cut the candles into short lengths to fit the lanterns; and, a thin fleece of snow having fallen since the early part of the evening, those who had no leggings wound wisps of hay round their ankles to keep the insidious flakes from the interior of their boots.

Old William Dewey, with the violincello, played the bass; his grandson Dick the treble violin; and Reuben and Michael Mail the tenor and second violins respectively.  The singers consisted of four men and seven boys, upon whom devolved the task of carrying and attending to the lanterns, and holding the books open for the players.  Directly music was the theme, old William ever and instinctively came to the fore.

'And, Coss,' said the tranter terminatively, 'you keep house here till about half-past two; then heat the metheglin and cider in the warmer you'll find turned up upon the copper; and bring it wi' the victuals to church-hatch, as th'st know.'

Just before the clock truck twelve they lifted the lanterns and started.  The moon, in her third quarter, had risen since the snowstorm; but the dense accumulation of snow-cloud weakened her power to a faint twilight, which was rather pervasive of the landscape than traceable to the sky. The breeze had gone down, and the rustle of their feed and tones of their speech echoed with an alert rebound from every post, boundary-stone, and ancient wall they passed, even where the distance of the echo's origin was less than a few yards.  Beyond their own slight noises nothing was to be heard, save the occasional bark of foxes in the direction of Yalbury Wood, or the brush of a rabbit among the grass now and then, as it scampered out of their way. . . .

. . . . By this time they were crossing to a gate in the direction of the school, which, standing on a slight eminence at the junction of three ways, now rose in unvarying and dark flatness against the sky.   The instruments were retuned, and all the band entered the school enclosure, enjoyed by old William to keep upon the grass.

Then passed forth into the quiet night an ancient and time-worn hymn, embodying a quaint Christianity in words orally transmitted from father to son through several generations down to the present characters, who sang them out right earnestly.  'Remember Adam's fall, O thou Man: Remember Adam's fall From Heaven to Hell . . .'  Having concluded the last note, they listened for a minute or two, but found that no sound issued from the schoolhouse.  Four breaths, and then, "O, what unbounded goodness!" 'number 59', said William.  This was duly gone through, and no notice whatever seemed to be taken of the performance.

'Good guide us, surely 'tisn't a' empty house, as befell us in the year thirty-nine and forty-three!' said old Dewy.

'Perhaps she's jist come from some musical city, and sneers at our doings?' the tranter whispered.

' 'Od rabbit her!' said Mr Penny, with an annihilating look at a corner of the school chimney, 'I don't quite stomach her, if this is it.  Your plain music ell done is as worthy as your other sort done bad, a' b'lieve, souls; so say I.'

'Four breaths, and then the last', said the leader authoritatively.  ' "Rejoice, ye Tenants of the Earth," number sixty-four'.

At the close, waiting yet another minute, he said in a clear loud voice, as he has said in the village at that hour and season for the previous forty years - 'A merry Christmas to ye!'

Labels: Thomas Hardy: Christmas extract from Under the Greenwood Tree.