Cascob Church is vaguely near the focus of my interest today. 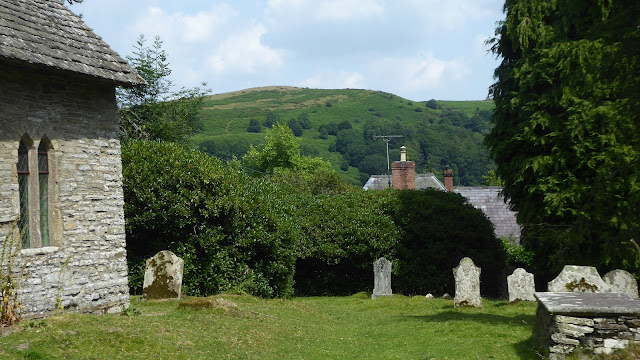 I am currently reading Phil Rickman's novel, The Heresy of Dr Dee, which has of course strong elements of Border history in it.  I had never heard of the Battle of Pilleth (known to the Welsh as the Battle of Bryn Glas).  Never realized that the Judge's Lodgings for which there are many signposts around the Welsh countryside we traversed this year, was such a gem of a museum, and Phil Rickman incorporated this courtroom into his story, having a London judge Sir Christopher Legge sit there in judgement of the Plant Mat leader Gethin Rhys. Never heard of Plant Mat either.  Now there is so much to explore when the weather improves a bit and the days lengthen into spring. (Currently counting down to the shortest day).

The Battle of Pilleth (Bryn Glas if you are Welsh) was one fought by Welshman Owain Glyndwr against Sir Roger Mortimer (he himself with great land holdings in the Welsh borderlands and within this area of Radnorshire, though the county was not officially created until 1542, 140 years after the battle).  HERE is a link to the matter, and worth reading.  The English corpses stayed unburied . . .

The rebellious Plant Mat, of whom the character in the book, Gethin Rhys, was supposedly the leader, were originally centred around the Devil's Bridge area on the edge of Ceredigion (Cardiganshire) during 1530, and on hearing of the route of the judge to Rhayader church,  they hatched a plan to ambush and murder the judge there.  They were hunted down and captured and not unsurprisingly, put to death. HERE is another link which tells you more.  We had never heard of Plant Mat (Matthew's Children) before and they were never taught in History in the Welsh schools my children attended.

I have had a wonderful wander round Welsh history this afternoon, which sooths the edges off endless online quotes and phonecall waits to try and discuss renewing our house insurance policy, with an alteration (how dare you wish to change the details?!  You can WAIT now.)  I am now off to read in detail, bits from a book on Wales by Sabine Baring-Gould, a Devon priest, antiquarian, novelist of Lew Trenchard.  I have several lovely old copies of various of his books, especially about the West Country and its history and folklore.  He read and researched widely and in such detail and there are many amazing and utterly forgotten snippets in his book of North Wales.  We were always told at University to get back to ORIGINAL sources in our research wherever possible, rather than "facts" which have been passed and altered like Chinese whispers, by people utilising them subsequently. In the same way we were taught to always be aware of bias - of people having decided what the end of their book, article, essay would be and then plucking up "facts" to fit the rhetoric. "What they brought to the table" was always something to be wary of - e.g. their personal bias, however unintentional it might be.  Baring-Gould seemed to be innocent of any spin.

I shall leave you with this snippet:

"Sir John Pryce, fifth baronet, of Newtown Hall, was born in 1698, and succeeded to the title and estates on the death of his father in 1720. He[272] married first his first cousin Elizabeth, daughter of Sir Thomas Powell. She died in 1731.

One day Sir John was overtaken by a storm of rain whilst out shooting, and took refuge under a tree, and to the same shelter ran a girl, Mary, daughter of a small farmer of Berriew, named John Morris. As the rain continued to fall, Sir John Pryce was given plenty of time to make the girl’s acquaintance, to fall in love with her, and to propose. This led to a second marriage.

But the humble origin of Lady Pryce led to much spiteful comment, and some people would assert that she had not been married to Sir John. This was absolutely untrue, but falsehood is believed if venomous. Whether it were this, or that she could not accommodate herself to her new situation, or the fact that the first Lady Pryce was kept, embalmed, by the bedside, or perhaps all together combined to weigh on her spirits, and she died of despondency after two years of married life. This was in 1739.

Ere long, however, he fell in love again, and this time with a widow, Eleanor Jones, and married her.

But when the lady found the bodies of his two preceding wives embalmed, one on each side of the matrimonial bed, she absolutely refused to enter it, and ordered their burial “before she would supply their vocation.”

She also died, in 1748. Immediately Sir John wrote off to one Bridget Bostock, “the Cheshire Pythoness,” who pretended to heal the sick by the faith-cure and with her “fasting spittle,” which she supplied in corked and sealed bottles:—

“Madam,—Being very well informed by very creditable people that you have done several wonderful cures, even when Physicians have failed ... why may not God enable[274] you to raise the Dead as well as to heal the Sick, give sight to the Blind and hearing to the Deaf? Now I have lost a wife whom I most dearly loved, and I entreat you for God Almighty’s sake that you would be so good as to come here, if your actual presence is absolutely requisite, to raise up my dear wife, Dame Eleanor Pryce, from the Dead.... Pray let me know by return of the Post, that I may send you a Coach and Six and Servants to attend you here, with orders to defray your expenses in a manner most suitable to your desires.

In compliance with this invitation Mrs. Bostock visited Buckland, in Brecknockshire, where Sir John then was, and exerted all her miracle-working powers, but without effect.

Sir John remained inconsolable—for a while. But from his will, dated 20th June, 1760, it appears that he was then meditating a fourth marriage. He, however, died before it took place. In his will he speaks of “that dearest object of my lawful and best and purest Worldly affections, my most dear and most entirely beloved intended wife, Margaret Harries, of the parish of S. Martin, Haverfordwest, spinster.”

Taken from The Project Gutenberg eBook of A Book of North Wales by Sabine Baring-Gould.