Llanelwedd Quarry on the edge of town. 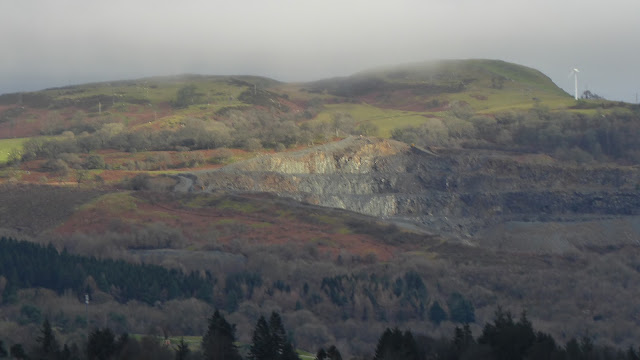 I have to say, once Christmas is over I would happily pack everything away pretty swiftly.  I am NOT a Twelfth Night person - here it is New Year's Eve when everything goes back in the boxes and we face the New Year all sorted.

I began this morning by baking another loaf, as the one I made yesterday(using the steam function in my new oven) soon got eaten.  So now I have another nice crusty Coburg shape loaf using half Oatmeal flour and half strong plain.  The crust is studded with Pumpkin Seeds. Yesterday's didn't stay around long enough to cool as we had it for lunch with a cheeseboard, and very good it was too.

I have also set to and done the ironing mountain - half of which was king size bedding, but at least it's all done now.

Christmas was very enjoyable, and it was wonderful to have all our family here under one roof this year.  Everyone took a Flow Test (us included) before our get-together.  On Christmas Eve we had our favourite venison casserole, using the Antony Worrall-Thompson recipe I've been using since it was first published in a magazine in 2007.  Christmas lunch was a gigantic turkey-sized Capon, cooked to perfection.  My contribution to the meal was the Chocolate Roulade and the washing up afterwards (6 bowlfuls!!). Thank you kids. Yesterday D made his fabulous Rum &  Pineapple Ham, and we have some more to finish off today.

Strangely, I have had no appetite, and wasn't too bothered about wine either, or chocolate, and I have lost 3lbs in 3 days.  Let's hope I can keep that up!

I had some lovely gifts, including colourful new towels to match the new bathroom.  FINALLY I can pension off some of the ones inherited from my mother-in-law who bought towels in the January sales every year. I prefer to choose my own! I have the new Diana Gabaldon book to read, some murder-mysteries set in Wales in the 1850s, William Morris themed things, and things I actually needed and asked for.  T, amazingly, found the exact thing I had been looking at and thinking of buying when I saw it at an Antiques Fair.  It was a little horse shoe, bound with coloured ribbons (faded now) and with a ribbon and a riding hat in the centre.  She found hers in Aberystwyth though!

Now, despite the rain, I need to get a walk in and the bins out.  I hope you all had a lovely Christmas too.

Update:  two walks have been had today - a short one in the park with K, and then a longer faster one on my own.  Too much sitting makes my hips hurt, so I want to get into increasingly longer walks again as the weather improves.

We still have our son D here - first of all his 12.20 train was cancelled, so his plan was to catch the 4 p.m. and then THAT was cancelled.  Since he had booked a ticket for the first, and not had any text to tell him it was cancelled, and the same again for the later train, he has fired off an irate email to them.  The Heart of Wales Line is a quiet one - one or sometimes two carriages which travel between Swansea and Shrewsbury (very slowly though!)  Free concessionary travel has been returned to it from October to March.  D has to pay of course.  So now we have offered to drive him home tomorrow - that way we can be sure he will get there.

The large capon (chicken) has bee stripped and is now bubbling away in my jam pan in the company of leek leaves, carrots, onion etc for soup stock.  Tea is chicken curry and cold cuts for Keith.

Hint to weather - mild is nice but some sunshine would be delightful.