St Michael and all Angels, Moccas 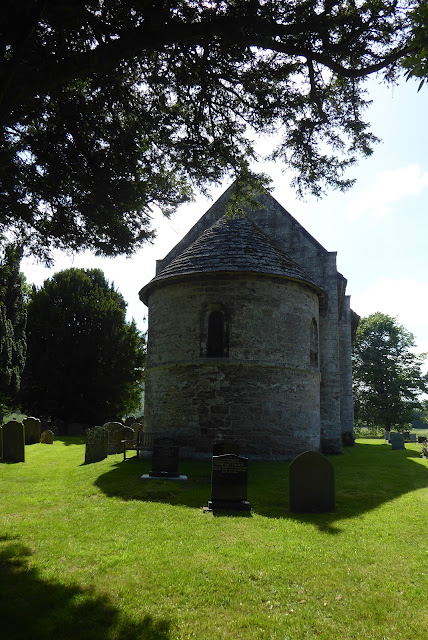 This was easy to find. Take the B4352 between Hereford and Hay-on-Wye and turn towards Moccas village on the lane which is split by a war memorial.  Then left across Moccas House parkland (though the aged sign is very worn). The church is on the left before the lovely 18th C house, seat of the Cornewall family.  The Apse has original windows.
It is built on the site of an 8th C monastery founded by St Dubricius and is an example of an early 2-cell Romanesque church, using local tufa stone, and with great similarities to Kilpeck church and probably built by the same masons. Please visit THIS site for more information, especially about the stained glass and its links in neighbouring Gloucestershire. 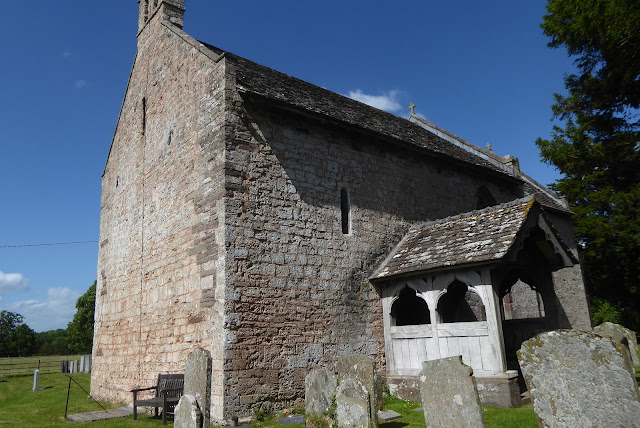 A very special 12th C church, although sadly the Norman tympanums are no longer there.  The South entrance had the Tree of Life and the north doorway a goat in a scrolled background, both sadly lost to erosion, although antiquarians could still identify them in the 18th C. The porch was added in the 14th/15thC, and some of the original chamfered plates survive although the timber is modern. 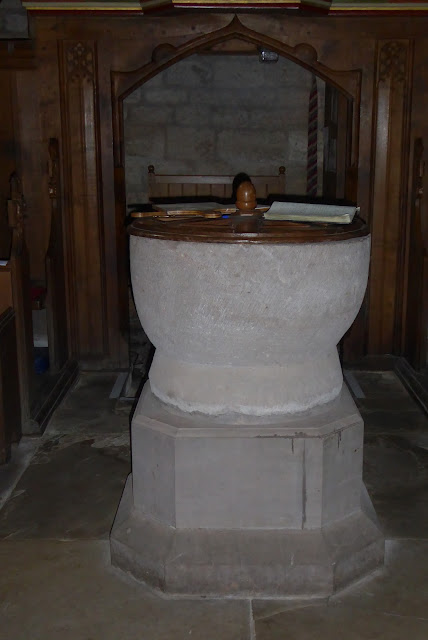 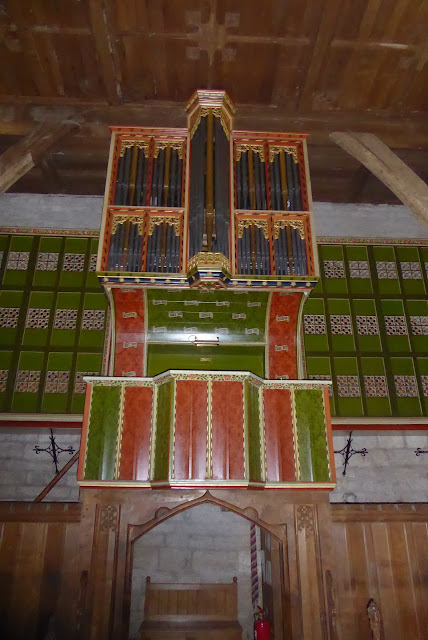 This amazing organ was designed by Gilbert-Scott Jnr. in Victorian times, and painted by Thomas Kempe. 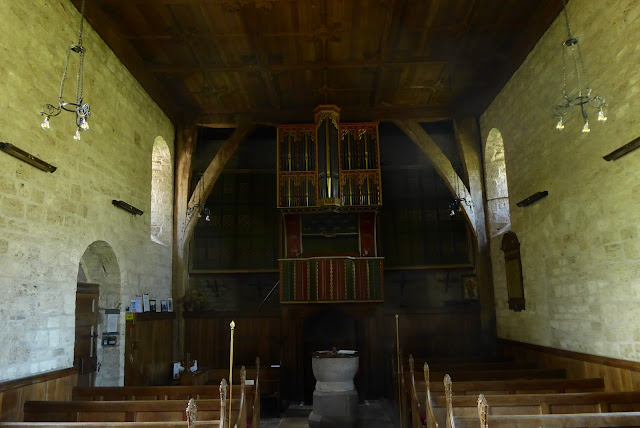 There was no obvious light switch so the church was rather gloomy. 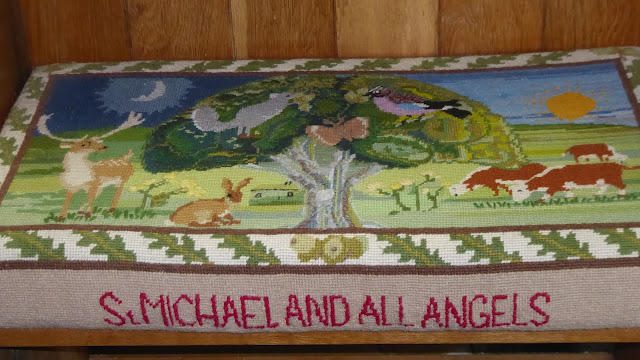 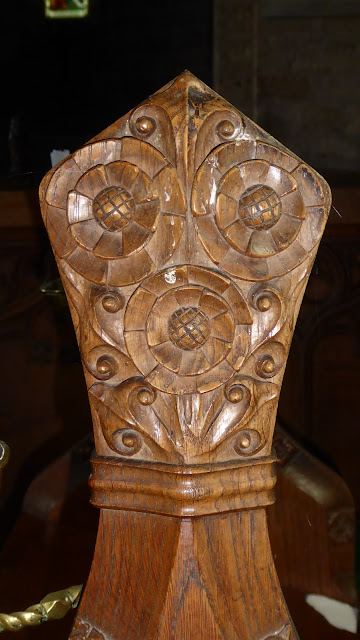 Above and below: beautiful wooden carvings. 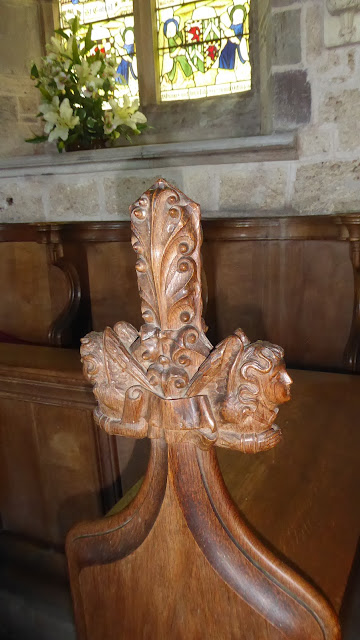 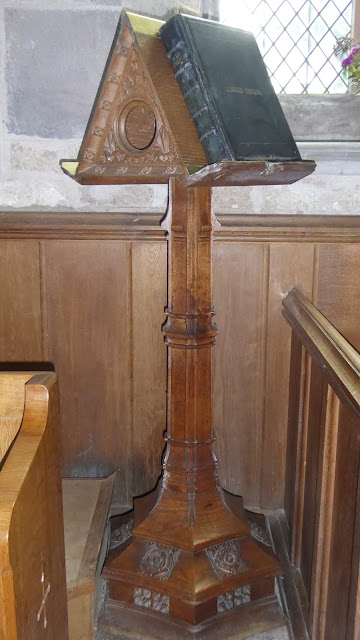 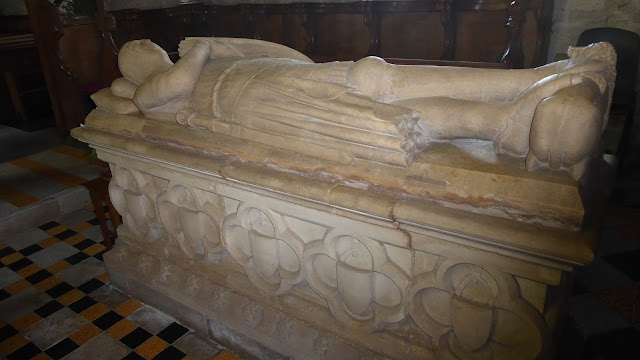 Effigy and tomb believed to be that of Roger de Fresne, who died in 1375. 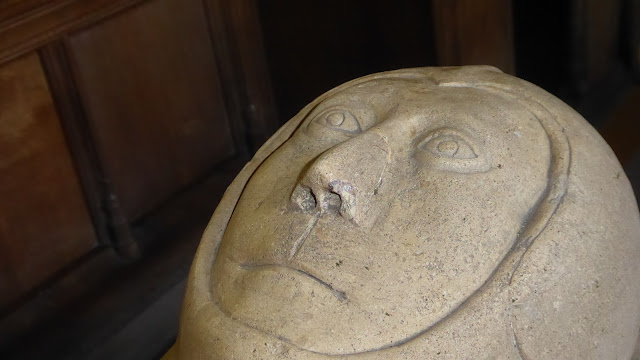 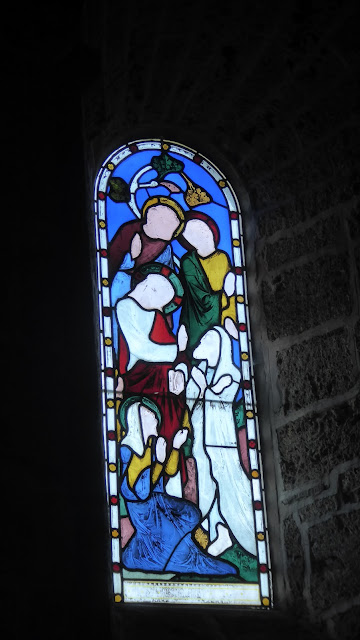 I confused myself with which glass was in which wall, so go to THIS LINK which will give you the information. Once again I was in a hurry as Keith and I had been to Hereford Hospital for more scans, and he was tired and just wanted to be back home. 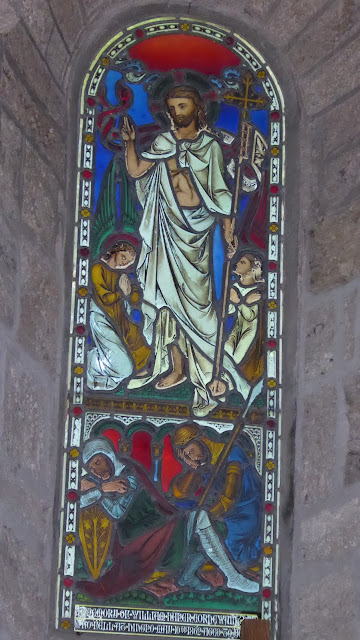 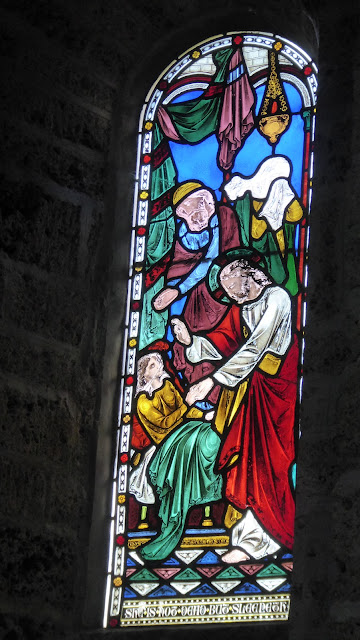 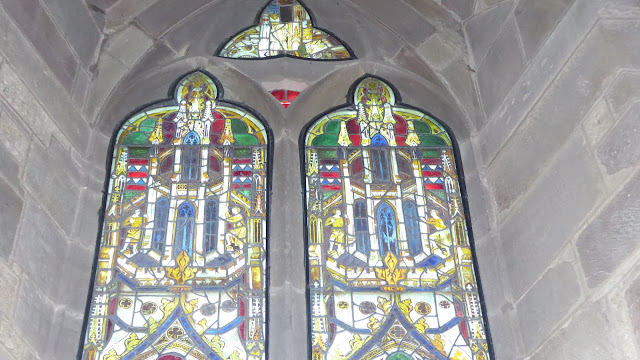 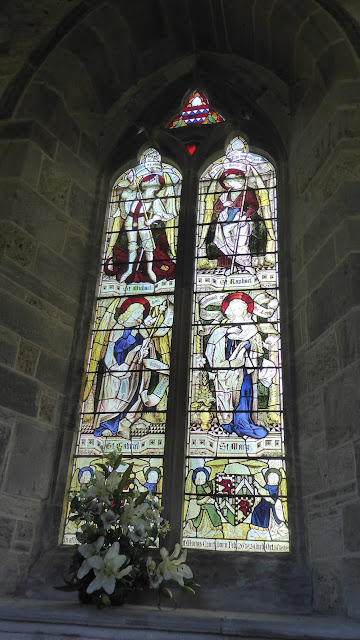 Right, having done some research, I am pretty sure this is the Kempe window.  A post today on Facebook by the Friends of Friendless Churches states that "it is pretty easy to spot a window by Charles Eamer Kempe.  His figures wear wistful gazes, are draped in damask, drip with jewels and pose under fecund Gothic arches.  Also, usefully, he often signed his windows with a golden wheatsheaf - a device derived from his family's coat of arms." No wheatsheafs here but wistful gazes aplenty!  It was in memory of one of the Cornewall family. 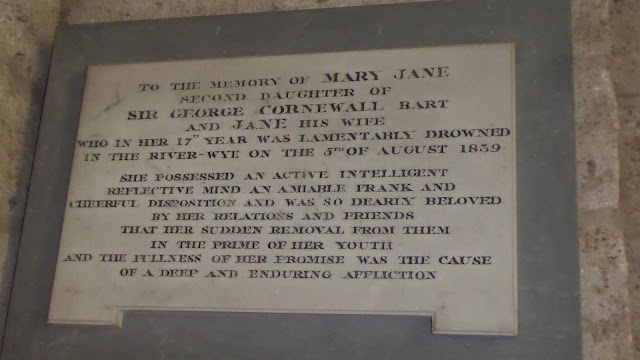 Poor girl, and what a dreadful shock for the family. 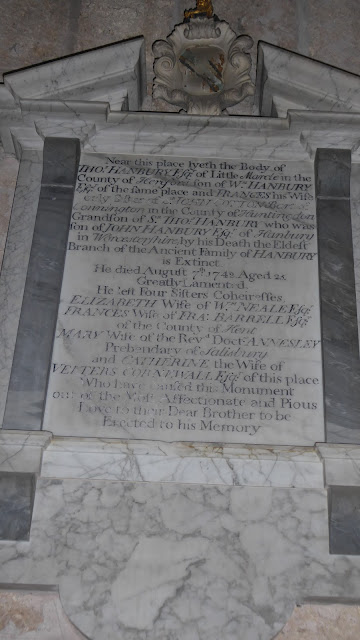 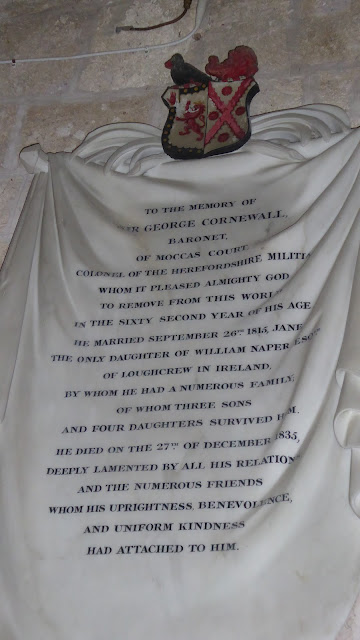 It can't have been easy to work the lettering across the marble folds. 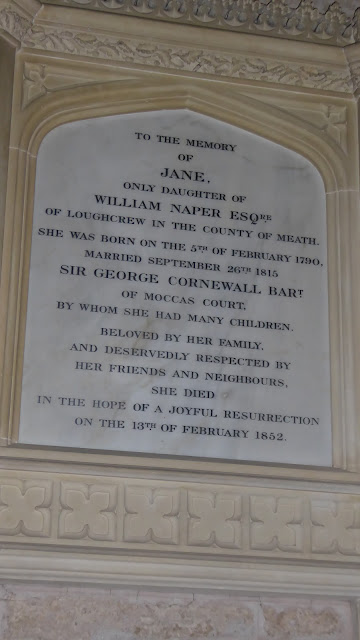 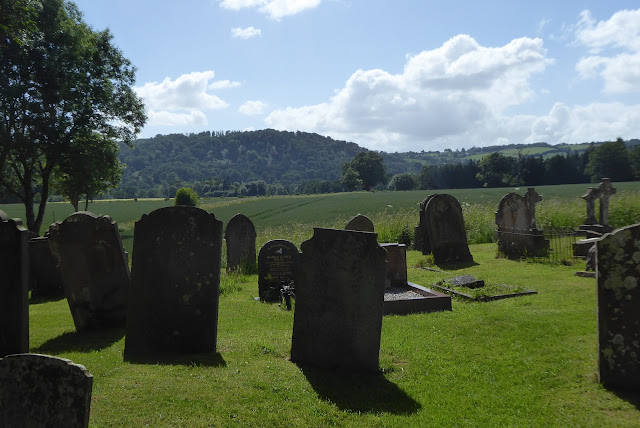 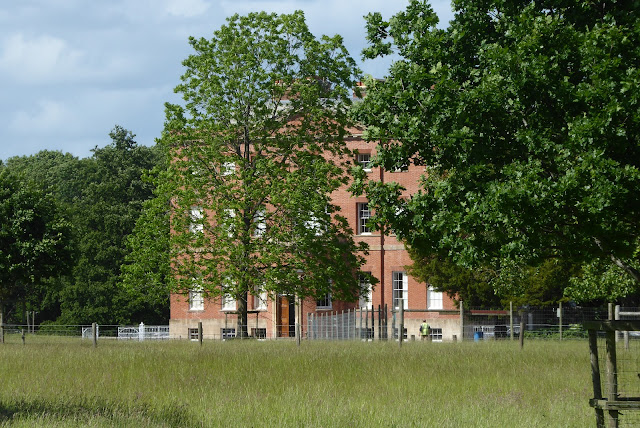 Moccas Court behind the trees.
Finally, just to show the invalid is very relaxed now: 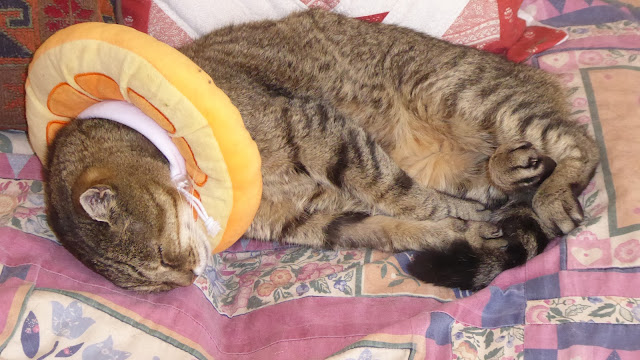