A tale for Halloween 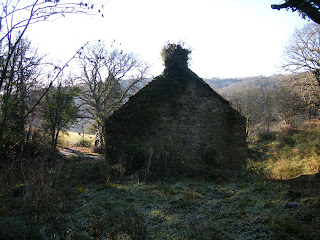 A little way up the valley from here stands a house, well into dereliction now, which has always given me the creeps. When we first moved here, I used to get a bad feeling whenever I drove past it. After dark, that feeling escalated, and as it is on a sharp bend, you always had to slow down to negotiate the curve of the road. I would put my foot to the floor as soon as I could and was always glad to be past it and heading towards home.

Once it had been a happy family home, with a little orchard behind it, and a good parcel of land, outbuildings and the most beautiful display of snowdrops on a sunny bank each spring. 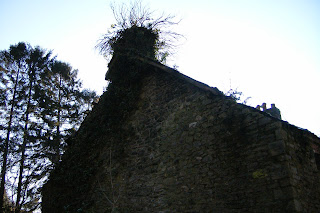 This feeling of unease has persisted for all the years we have lived here. One sunny and frosty day, I decided I would be brave and confront my fears. I parked up and wandered past the house, the land becoming increasingly soggy underfoot as the course of the stream had meandered closer to the house, seemingly undercutting the footings on one side.

I found the little orchard, still rimed with frost, and looked back at the ruins, dark and forbidding here in the little dell, despite the sunshine across the rest of the valley. I felt a shudder run down my spine.

I picked up one of the apples - bright green and red-striped and one or two still on the tree although it was December. I would guess that it was an old Welsh variety as it wasn't familiar to me, and neither was the smaller darker red apple from a tree by the boundary.

The roof had fallen in on the house years before. The walls were crumbling and sprouting greenery. The windows had rotted although they were still in place, but the doorway had fallen inwards, and the staircase collapsed. I steeled myself to look through the open doorway, to face my fears. My feelings of unease focused and hit me in the solar plexus like a fist. The most dreadful malevolent feeling engulfed me - like staring into the pit of hell - and I was gripped by sheer terror. I turned and ran past the building and past the barn to the car, and wrenching the door open, was away and driving up the valley like the Whisht Hounds were grabbing at my tailcoats.

Nor were my feelings unfounded, as I have since discovered that the folk who rented it once had involvements in some very dubious interests and one of them had been evicted, and he threatened that no-one would ever live in that house again . . . He certainly ensured that was the case. 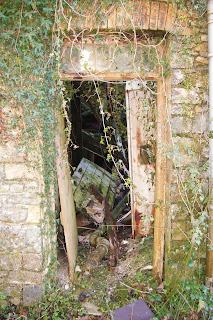