This is Jarvis, more commonly known as "Little Whale"! One of the three Muskateers : ) 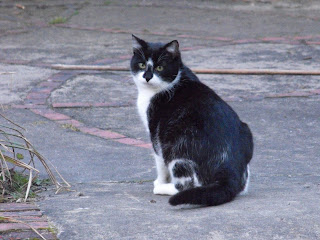 Monday morning, and I feel like I used to do when I worked, and it was the first day back after a lovely weekend or holiday. I just feel like a HEAP, with no energy to do anything! Sadly, it is my day for volunteering at the Big House and I had to change my day last week, so can't let them down two weeks in a row. I feel I shan't be doing much house-history today as my poor brain just wants to go to sleep!

Ah well. Such is life. I have been busy painting (still, again, etc) this time in the Junk Room (oops - LIBRARY!). One wall was still in the terracotta limewash and looked dark and shabby, so I laboriously moved the first stretch of junk away from the wall and out into the hall and I got the lid of the lovely clay paint (white) and started work. I still have a big pile of junk in the hall, but it's now finished and dry and so I can get the camping stuff back in the cubby hole in the corner which the kids used to have as a den, and then go through and remove anything which doesn't have good reason to HAVE to be in the house . . .

We had some local "wildlife" this past week. First one of the boys (who stay out all night and like to bring me "presents") left me a bat on the kitchen floor. I'm not sure what sort, though I did go and have a look at a couple of bat sites - and I was very amused to find there is such a thing as a SOPRANO Pipistrelle - so called because it has a higher pitch to its squeaks! 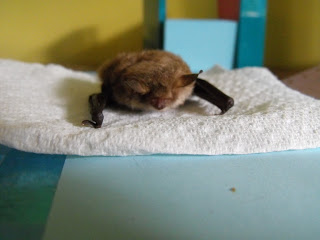 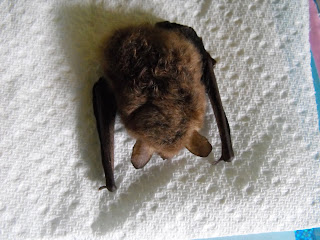 Then, when I was in what used to be called the intake area in the paddock, I found a big fat hairy caterpillar. Again, I'm not sure quite what it is exactly, except it's a moth caterpillar, but it could be a Drinker? 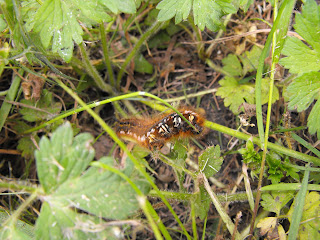 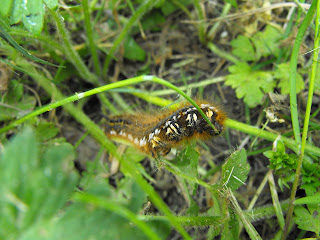 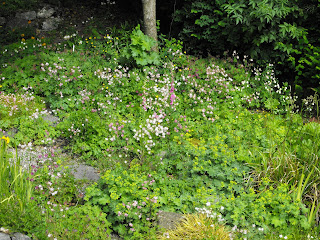 I leaned out of my office window at the weekend and took these photos of the garden. Here's the Aquilegia acre on the right hand side of the garden. 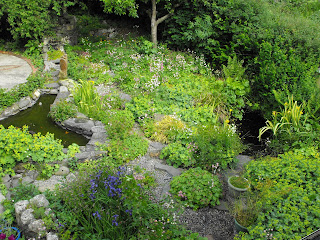 Another view of it, showing part of the big fish pond on the left and the wildlife pond on the right. 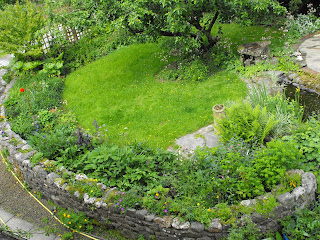 This is the left hand side of the garden, with the herbaceous border all the way around it, and trellis at the back with various roses and clematis growing up it. 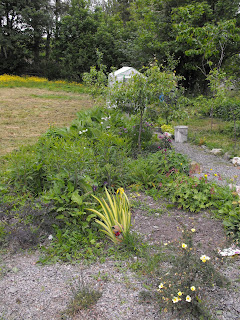 This is the bit I extended from the original herb garden - which had amazingly survived despite the horses marching over it and eating around it. The herb garden is the bit behind the young pear tree. The bit in front is planted up with all sorts and where I have a gap I add other plants I've grown from seed, dug out from elsewhere etc. 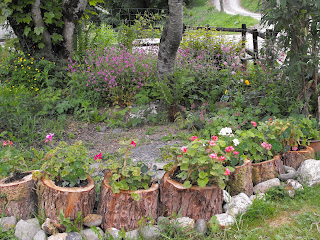 This area is by the front gate. When OH cut down a dead willow tree, one big branch was almost completely hollow, so we have utilised it as planters for geraniums and nasturtiums. 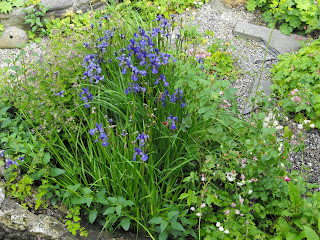 A closer view of the Irises in front of the house. I have another big clump down by mum's patio. 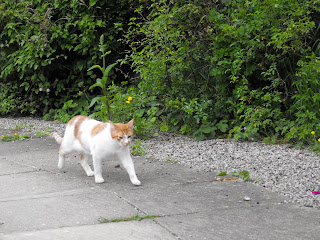 Above and below: Darling Alfie. All the "boys" throw themselves on the ground at your feet to have their tummies tickled! 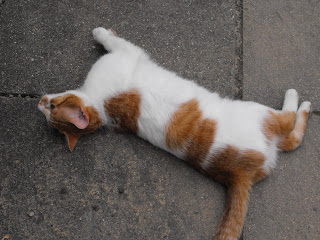 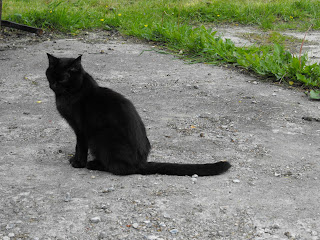 This is Lucy, Lucky's daughter. 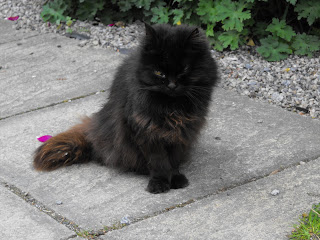 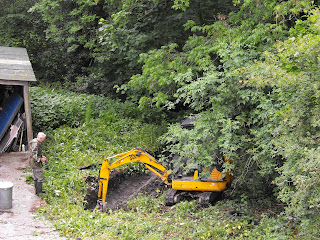 This house is such a money box - we had to get a neighbour to come and re-dig the soakaway so we can put an alternative pipe in . . . Then we will have to back-fill by hand as money is tight and we can't afford to have the digger back . . .
Posted by Bovey Belle at 00:23