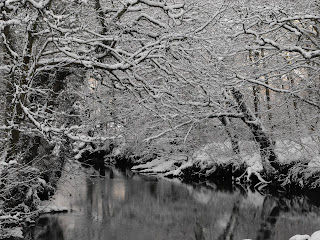 Whilst we don't go carolling hereabouts, I did in my Southampton childhood (being a Hampshire Hog, though of Devon stock through and through on dad's side.) Just a bunch of kids, well wrapped up in the evenings leading up to Christmas, and hoping for a bit of spending money - which we normally got - a sixpence here or a thrupppence there, and the Posh House once giving us half a crown between us, so we must have sung well for them!

Here is fellow Hampshire Hog (and more claim to it than I) Norman Goodland's take on Carol singing:

"Carols is funny things! They bain't all to do wi' Christmas! if you dont ring 'em oout proper, they might not answer the door, not gie thee nar 'apence!"

Foster Father was delivering his annual lecture to the Baughurst bell-ringers, of whom he was Captain. They practiced in Foster Mother's scullery, on the handbells.

I remember them - big bewhiskered men, shirt sleeved and leather belted, standing facing each other in a double row. Flashing up the brass bells. hecking the swing with broad thumb, to make them 'speak'' in their clear, fluid tones. It was all taken very seriously. Standards were high; they had to be, to impress the gentry upon whom they called.

They walked from Baughurst to Wolverton, back through Ramsdell and Pamber End, and home through what was then known as the 'gypsy'' village of Tadley. Or made their way up to Heath End, aiming for the high spot of the season - Aldermaston Hall.

"We had to watch they sarvint galls!" Father once told me. "They was always up to mischief!"

"We was invited up to the hall oncest. We 'ad to go in through the back, an' through the kitchens, y'see. An' we left our 'ats in the kitchen along wi' they gals.

"We went in and give a tune or two to the Master and the Mistress, and them as was there. They gie us a sovereign! They told us to go back to the kitchens and Cook would gie us a drink.

"So we done that. And when 'twas time to get on, they gals was round the door away from the light. An' they wouldn't gie us our 'ats until we give 'em a Christmas kiss.

"Waal - yu never put yer 'at on inside a gentleman's 'ouse, luk. So we put 'em on outside in the dark - so we didn't see what was gwine on.

"Anyways. We went on down to the Hhind's Head, t'other end o' the street. We went in, took off our 'ats - an' everybody started to laugh! We didn't know what to make on it! 'Til we looked at each other - an' then we seed we all 'ad white 'air - like a bunch of old men!

"Twas they sarvint gals! They'd put flour in our 'ats - whiles we was a-carollin' for the Master!"

Father and his bell-ringers faced some competition from other Christmas and New Year rounders - the village bands of the time - The August Hill Drum and Fife Band. The Temperence Bands; one from Tadley, one from Baughurst. But is is said at the end of their rounds, the Temperence Bands were not more temperate than Father and his bell-ringers, when they came to clanking up the garden path well after midnight, to collect their bicycles and wobble their ways home!

Taken from "A Hampshire Christmas" compiled by Sara Tiller. 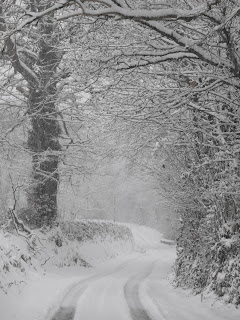