People were tougher then . . . 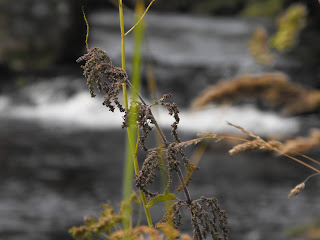 At yesterday's car boot sale I picked up a little book called Exmoor Wanderings, by Eric R Delderfield. I have a couple of others by him too (The Raleigh Country and Just Wandering in Devon). They are all published in the 1950s, when I was a little tot. By golly, but life was different then. E R Delderfield was brother of the novelist R M Delderfield and their father was editor of the Exmoor Chronicle. HERE'S a link for you if you want to learn more.

Delderfield writes of one old boy, still living (at that time), who, when he felt rather ill and went off his food, kept himself going on beer instead. And not just a couple of pints but 30 PINTS A DAY FOR FOUR MONTHS!!! I can only assume it was home-brew, and on the weak side. Apparently "he was very ill before he got better".

Then there was the farmer, Bill Ridd of Challacombe, weighing in at 30 stones if he was a pound, who managed to sire 8 children, never left the district (he died at Brendon in 1916) and despite his bulk, was out managing his farm every day, riding on - not a Shire-proportioned cob - but an Exmoor pony which must have been delighted at its master's demise! I have always known that Exmoors are tough (and stout) ponies (for photos see HERE) capable of carrying a man all day, but carrying 30 stone takes some beating.

Then there was the weather. Imagine snow so deep that even 5 bar gates were buried beneath it - which was the case in the dreadful winter of 1915. The farmers were going out with feed for their stock, using a horse and cart, and walking over the TOP of the gates! 1947 was another bad winter across the country, and it was 10 weeks before the roads were all cleared of snow . . .