Back to walking again 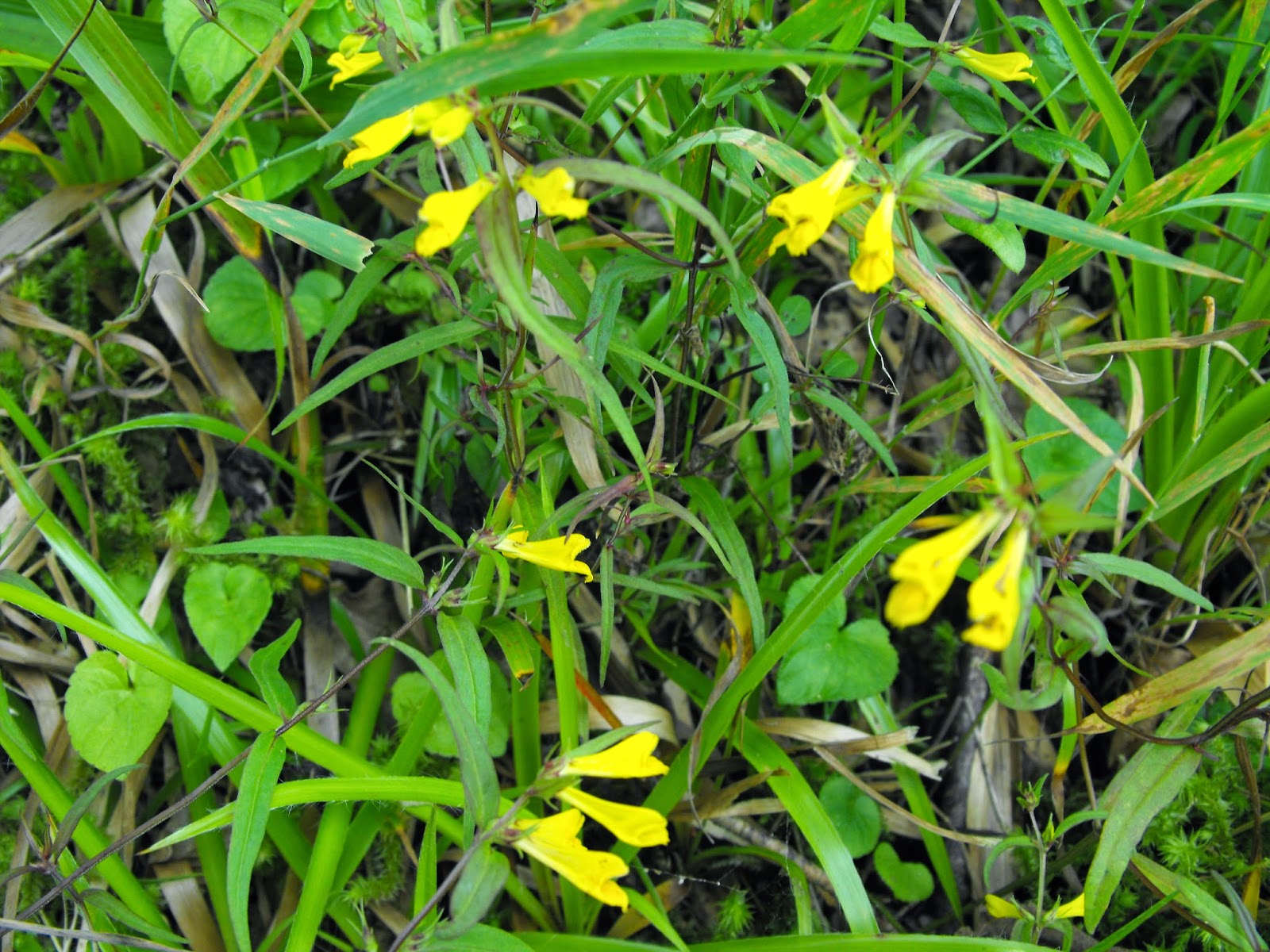 Yesterday I deemed that the pollen levels had fallen sufficiently for me to begin walking again.  Most of the hay/haylage has been cut round here and grasses gone to seed.  So I set out along by the river, soon regretting that I had a thin 3/4 sleeved top on and not the flimsiest of t-shirts.  Here is Common Cow-wheat which grows prolifically on the riverside bank. 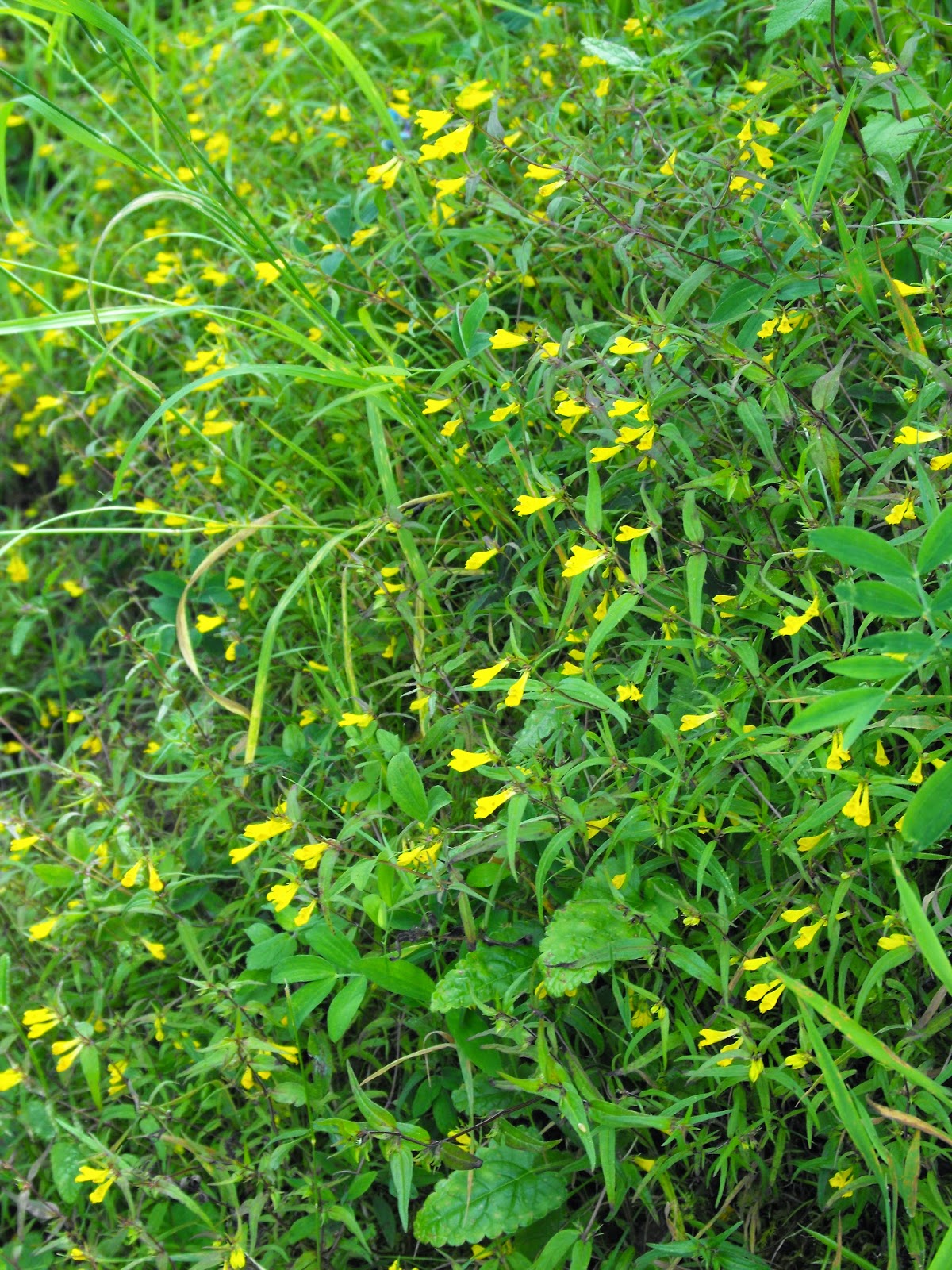 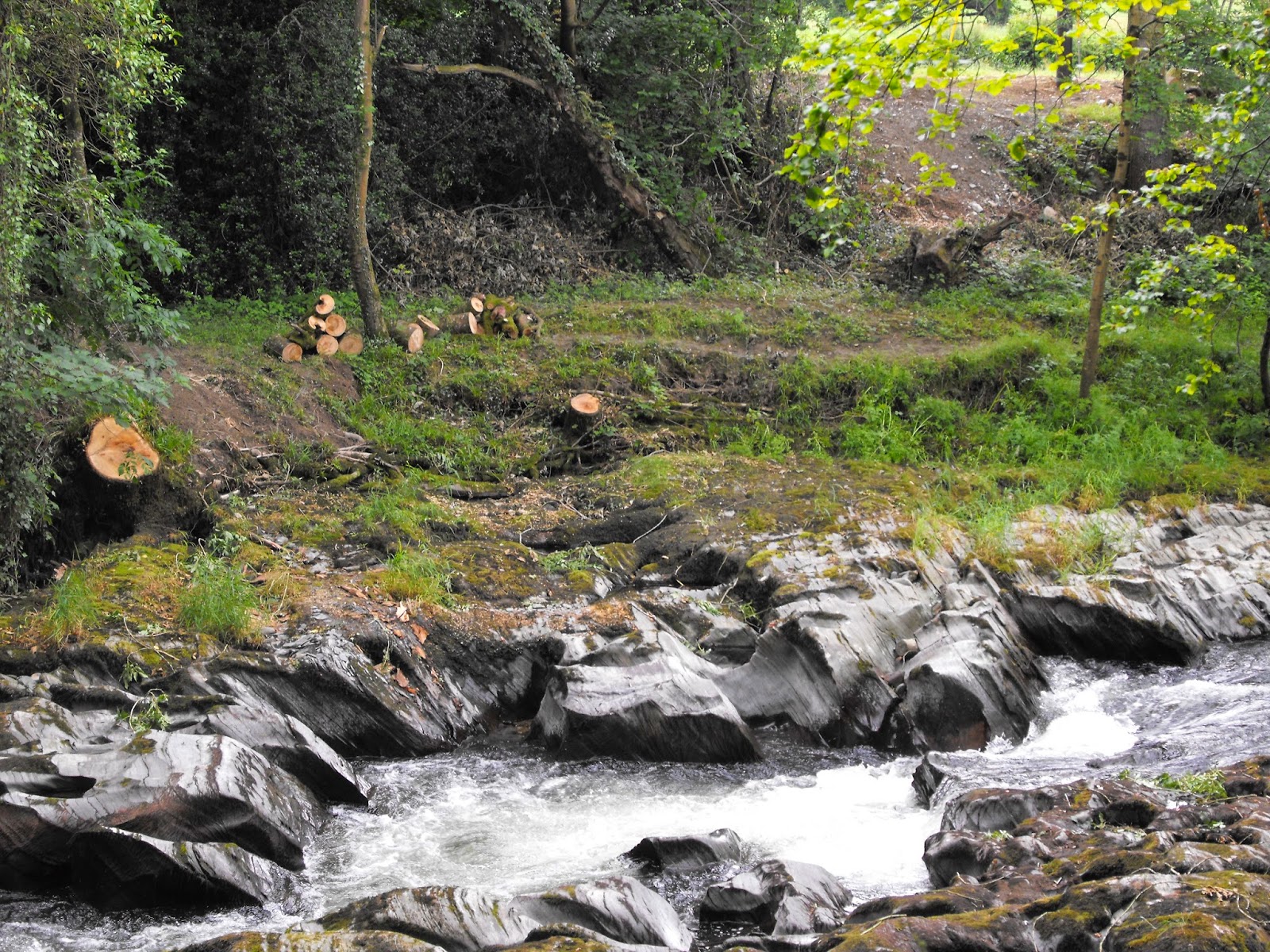 The river is low at present, after the long dry spell.  The clearing of a tree etc is proof that our neighbours finally have electricity in their house, after relying on a generator for 30 years or more now.  I imagine life will be much easier for them now, especially come winter. 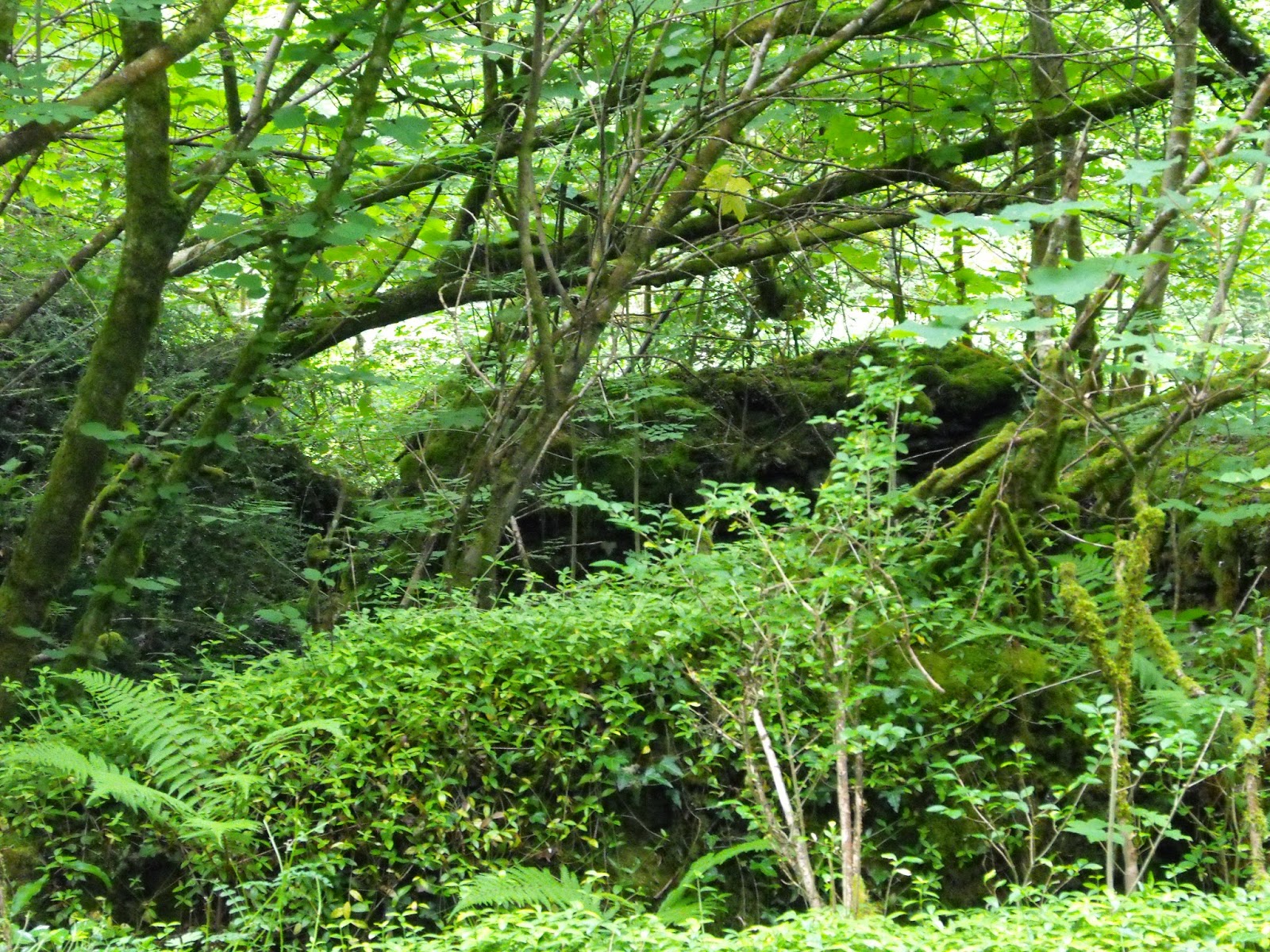 You can barely see that there was once a wee cottage here, it is so overwhelmed by moss and undergrowth. 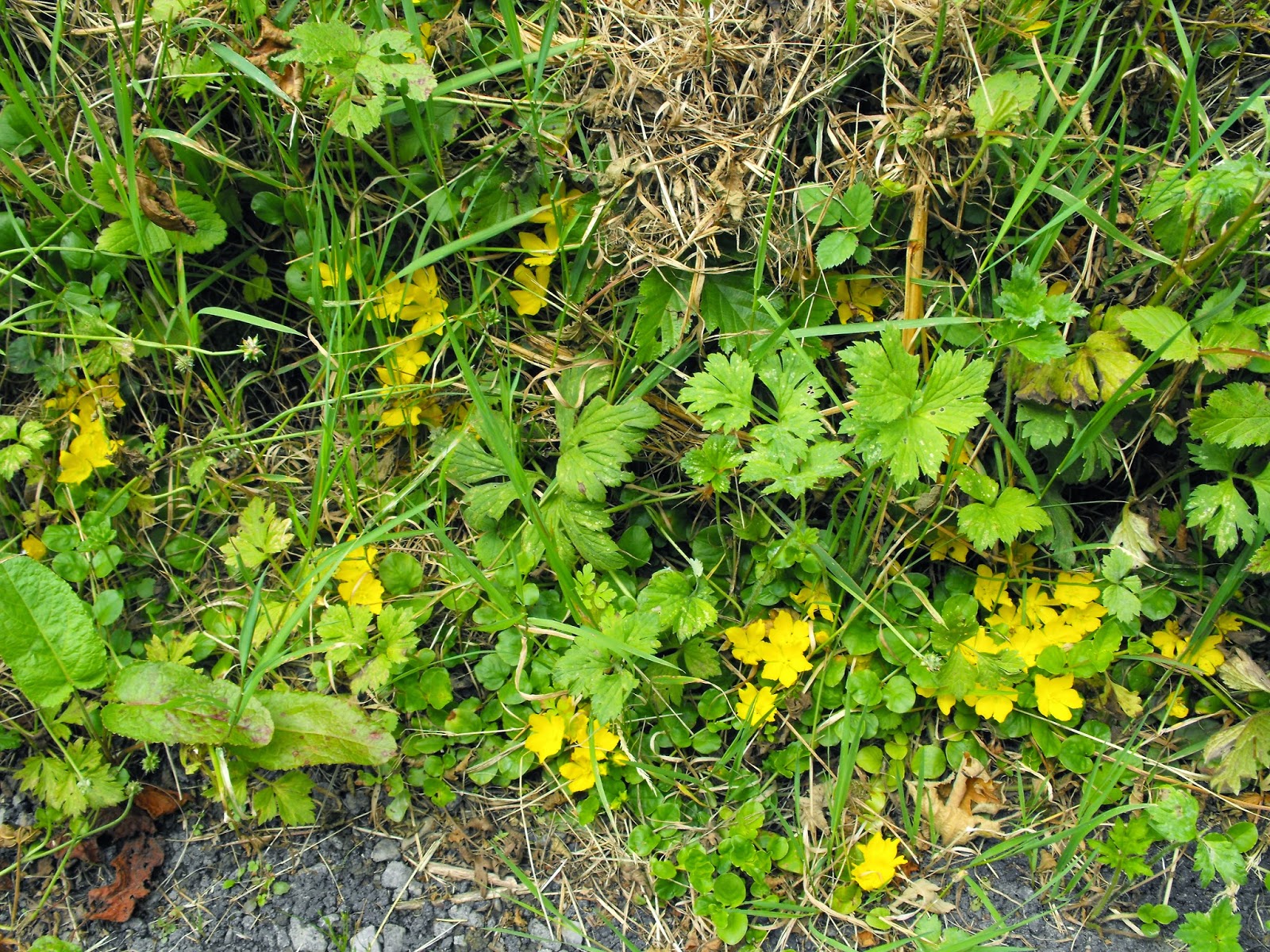 Where the road meets the bank and verge, Creeping Jenny tumbles down.  Its other common names include Moneywort and Herb Tuppence (love that one).  This plant contains a number of Phenolic acids, and was used in the past for healing wounds.  Some herbalists use it for treating gout. 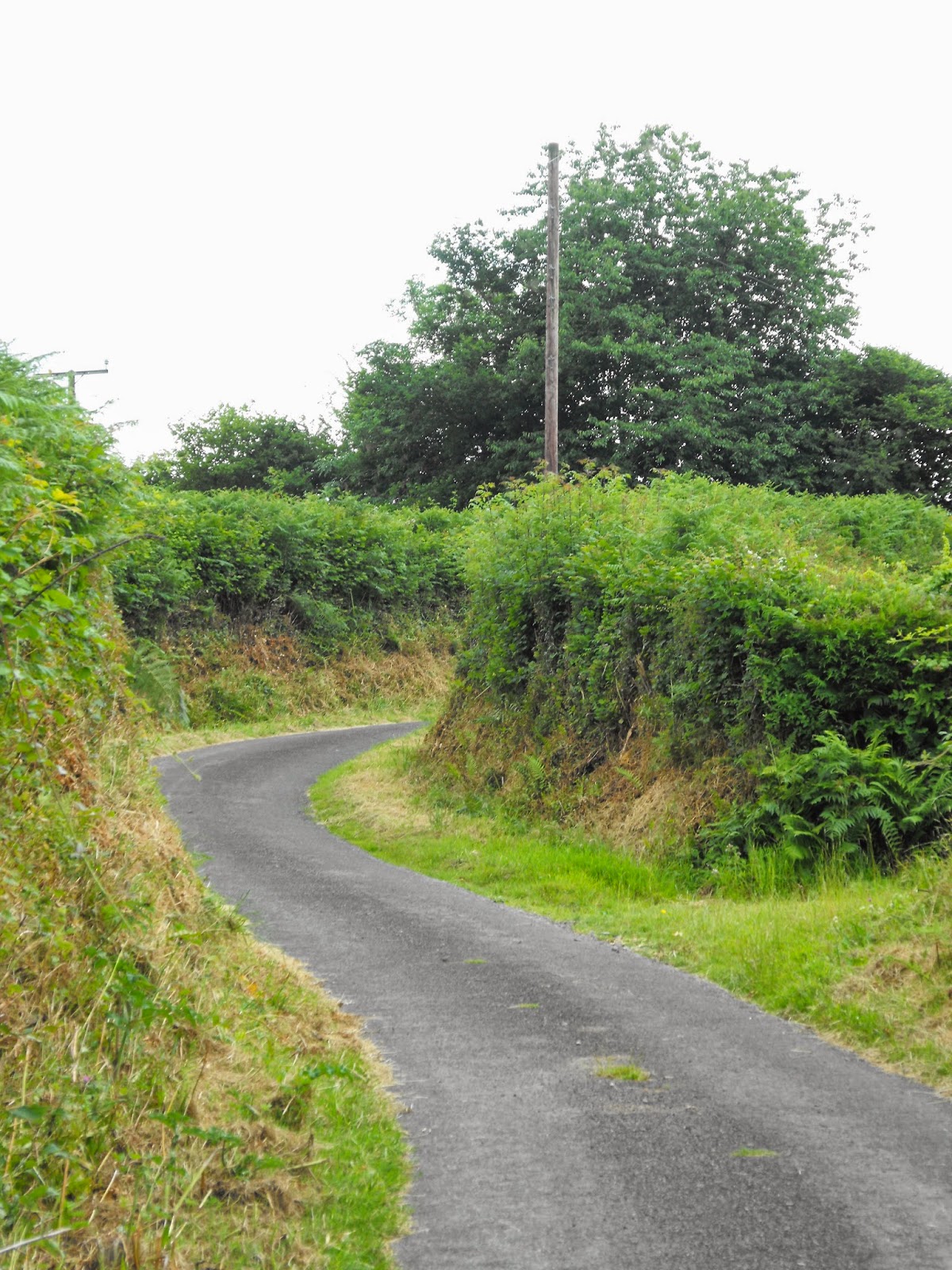 Now I am feeling better and my body is responding well to the change of medication, I am giving it a few challenges again.  This is a long steep hill, and although I knew I would be stopping a few times climbing it, I have to say it was my legs stopping me rather than my breathing, although obviously that was challenged too. 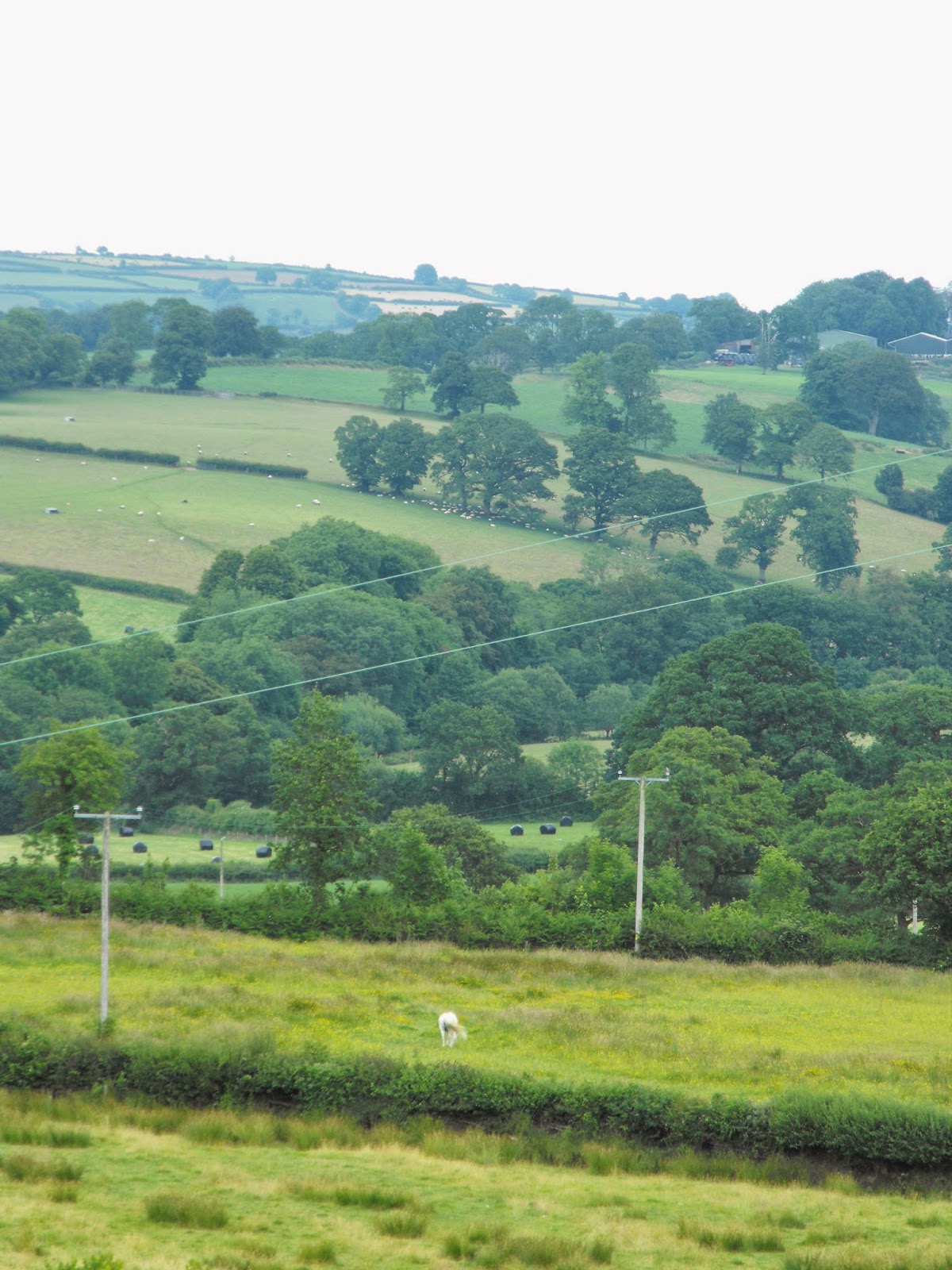 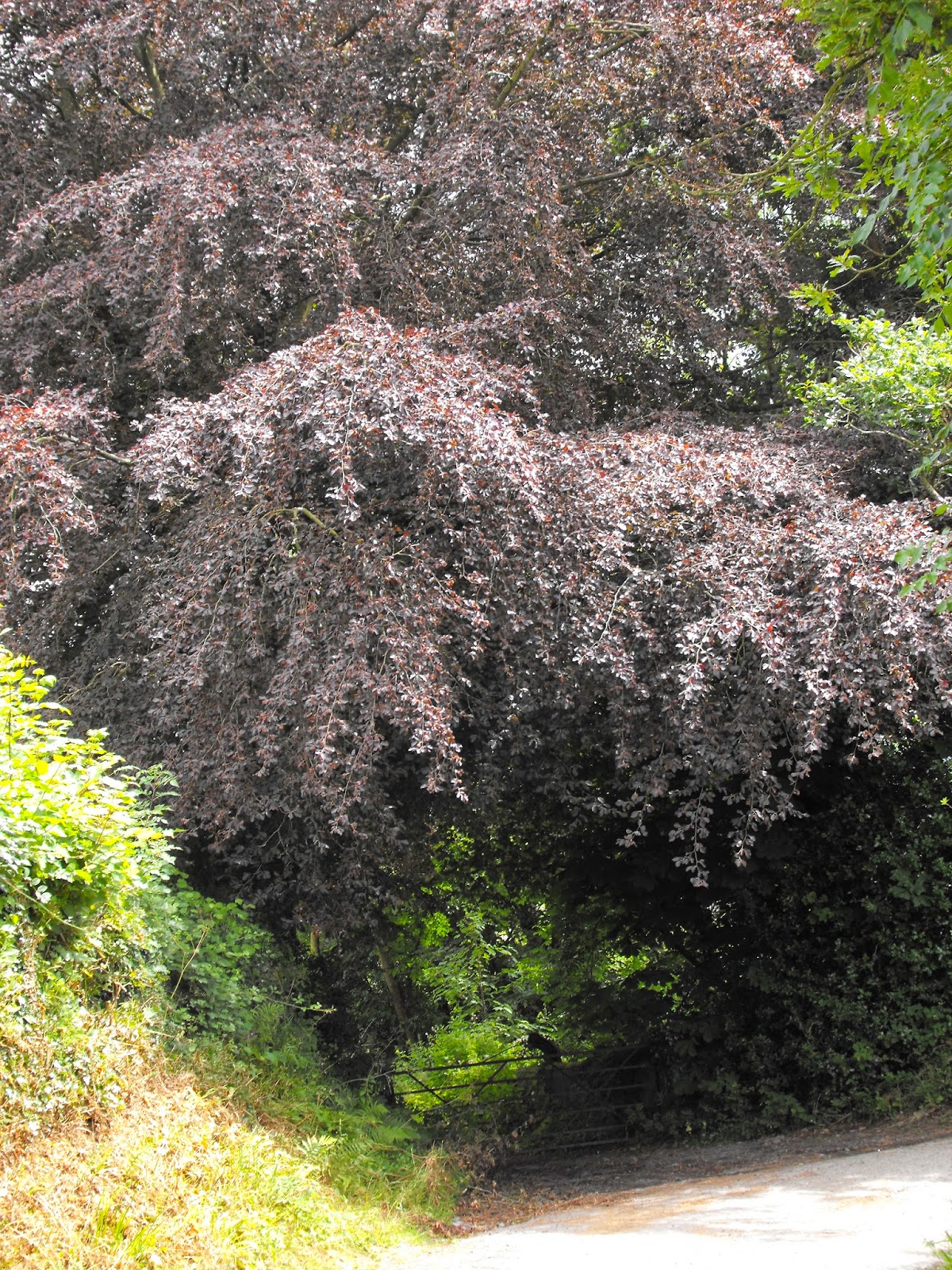 One of the spectacular Copper Beeches planted along our valley. 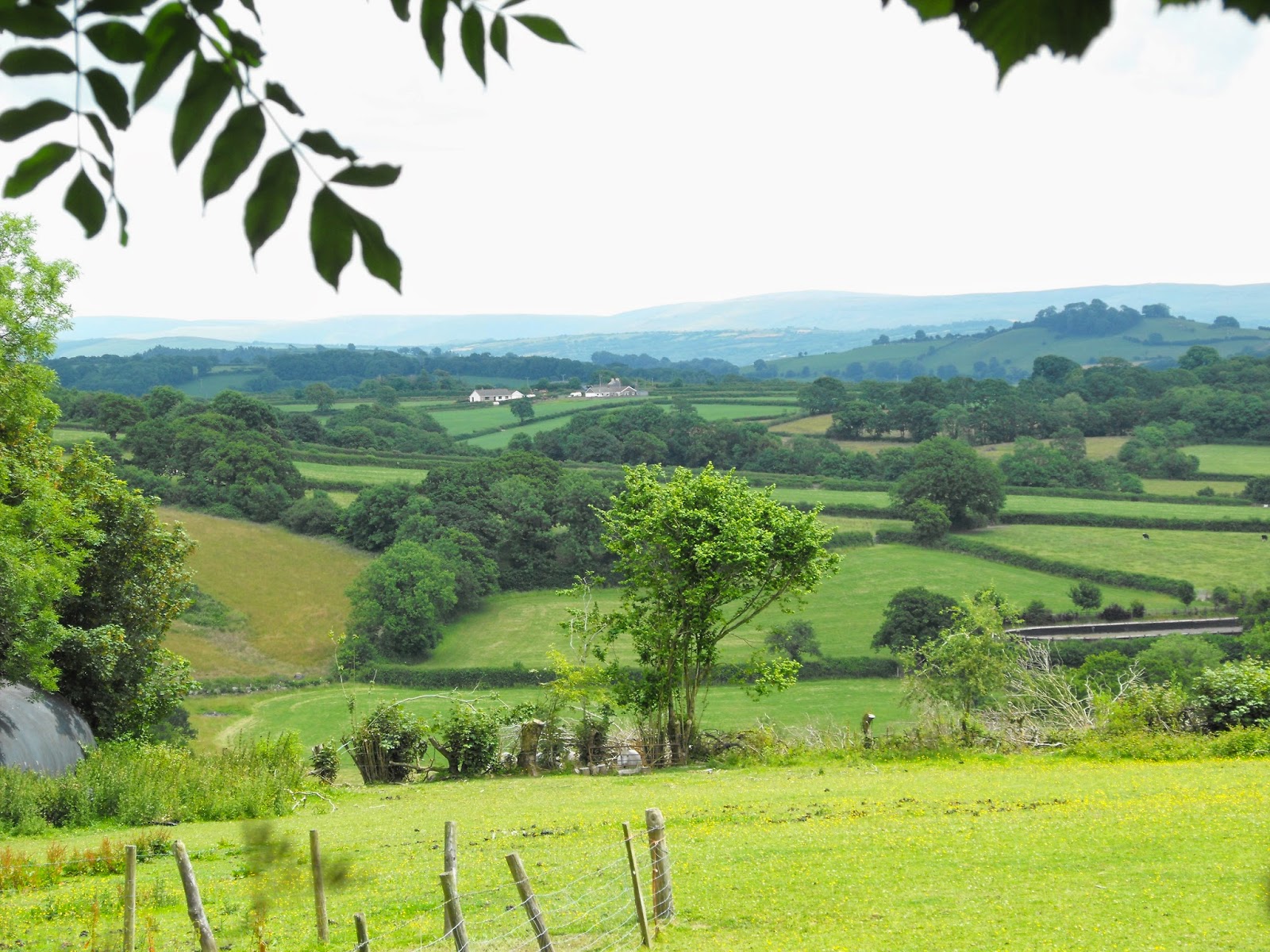 Looking across the Towy Valley with Grongar Hill top right.  The local poet John Dyer, who was born just up the road in Llanfynydd around the turn of the 1600s, his father being a very successful solicitor in the village.  A growing family (6 children) called for a larger dwelling and the Dyers moved to Aberglasney which is about 5 miles away by road and now a garden open to the public (I'm going there on Thursday morning in fact).  After his father's death in 1720, Primogeniture passed the Dyer estate and holdings to his brother Robert and John was not even mentioned in the will.  Perhaps his father recognized that the dreamy impractical poet and artist was never going to make a successful career as a solicitor.  Indeed, he travelled to Italy and spent 18 happy months there before returning to Aberglasney, where his estrangment from his brother sent him onwards to London.  He ultimately became an Anglican Deacon and the last years of his life were spent in Lincolnshire churches and he died in 1757 of a consumptive disorder.  Not too surprisingly, for Edward Thomas knew and loved this area so well, Thomas made a collection of Dyers' poems which were published in 1903. 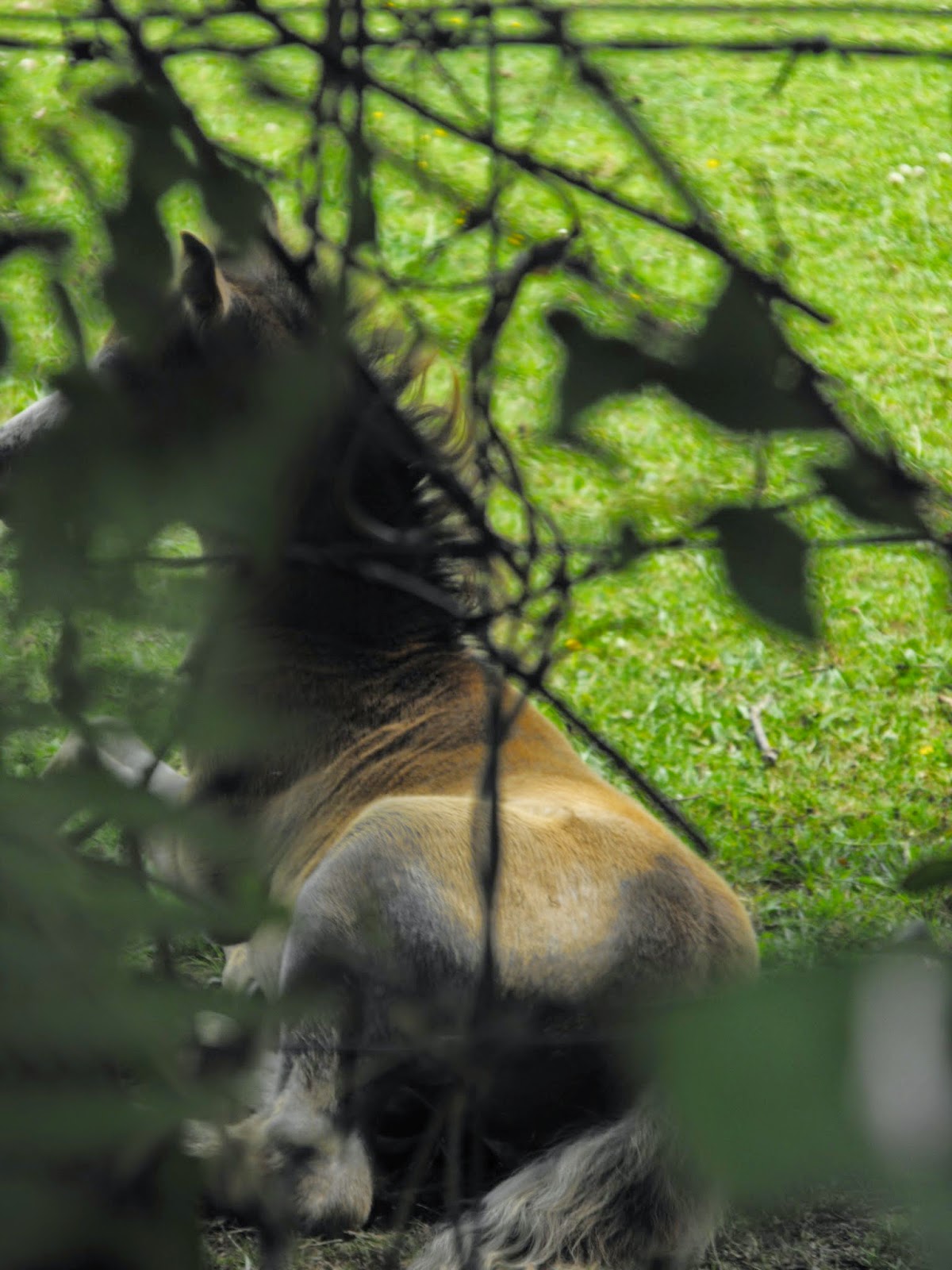 Unfortunately the click of my camera upset the mares and foals and they were soon up and cantering across the field. 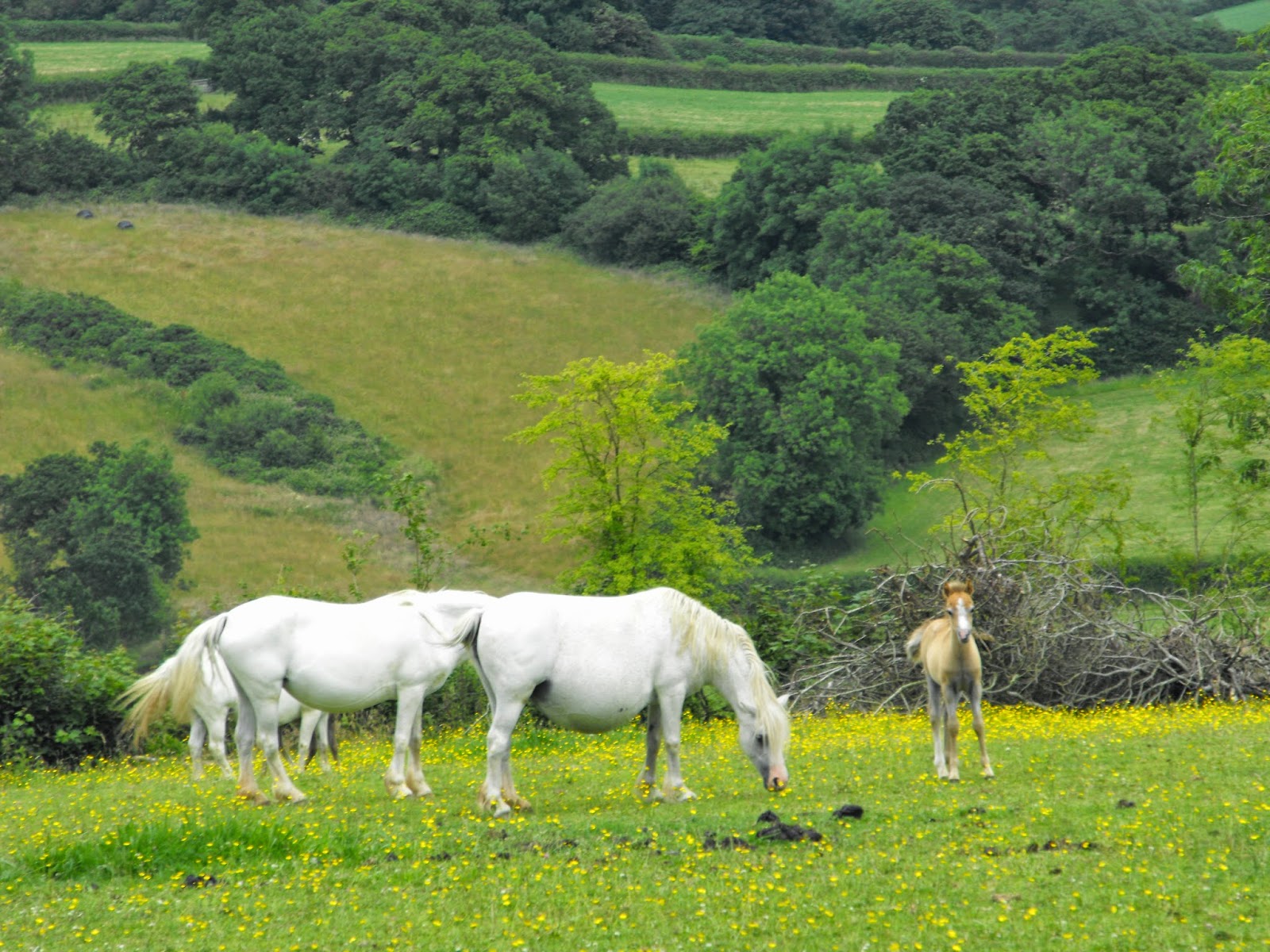 These brood mares are from the same stud where we bought our palomino Section A Merlin when we first arrived in Wales.  Gosh, he'd be 26 now . . . 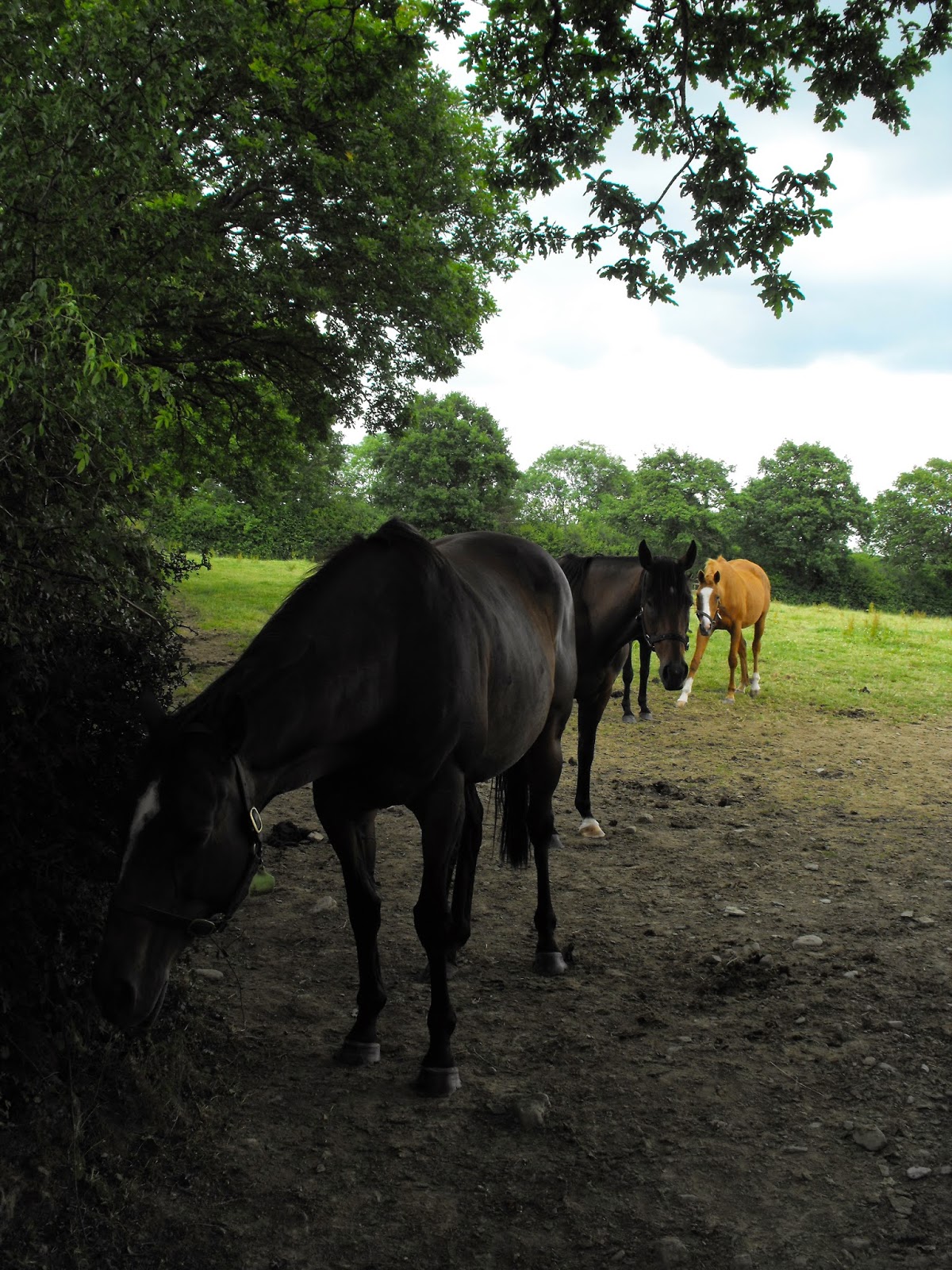 Visiting mares at the TB stud next door. 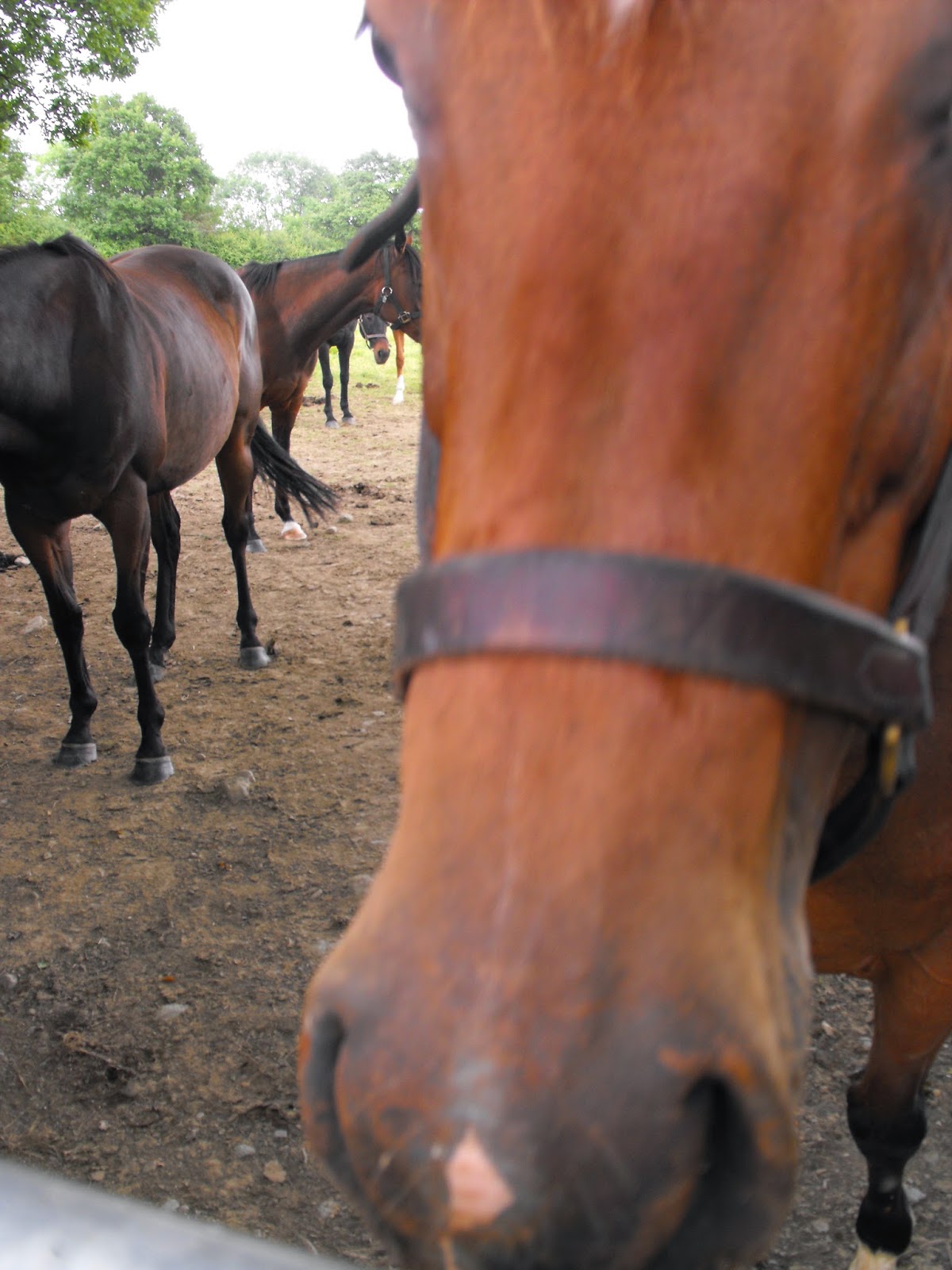 Someone was keen to make friends.  She was such a poppet and it was lovely to have horsey cuddles again. 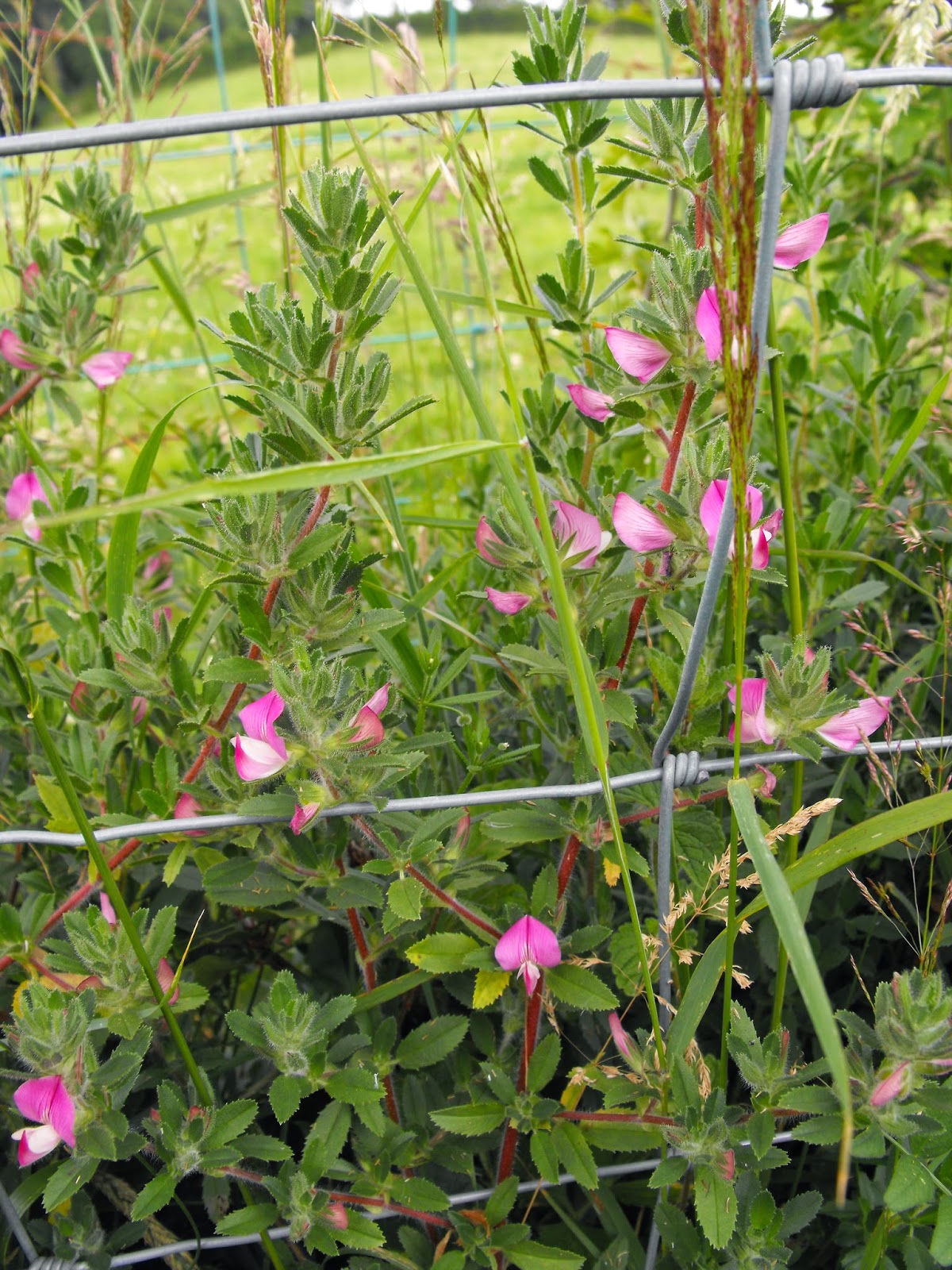 Rest Harrow on a bank top.  Normally you see this growing close to the coast and denoting poor soil. 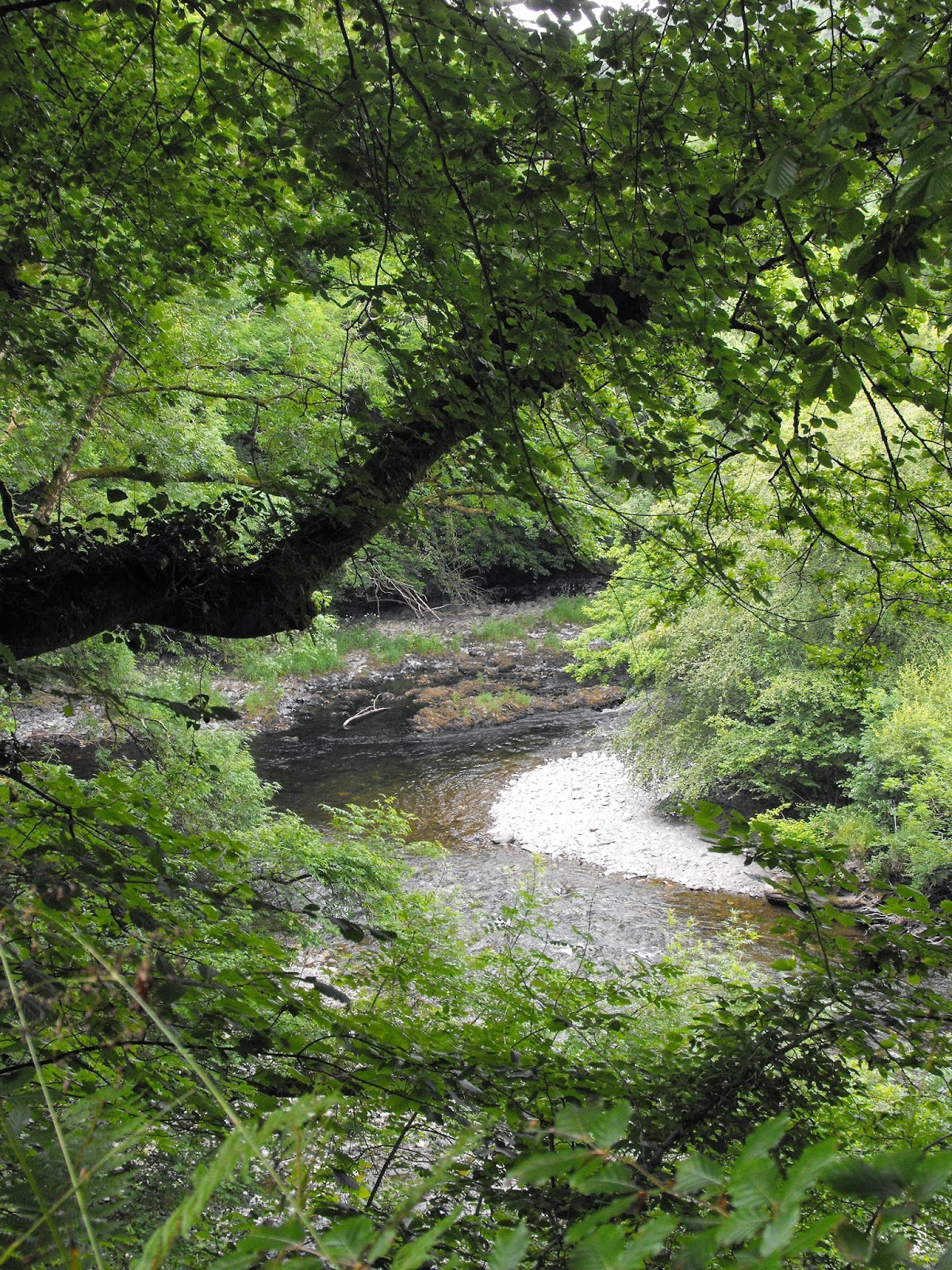 A loop of the river much closer to the A40 end of the lane. 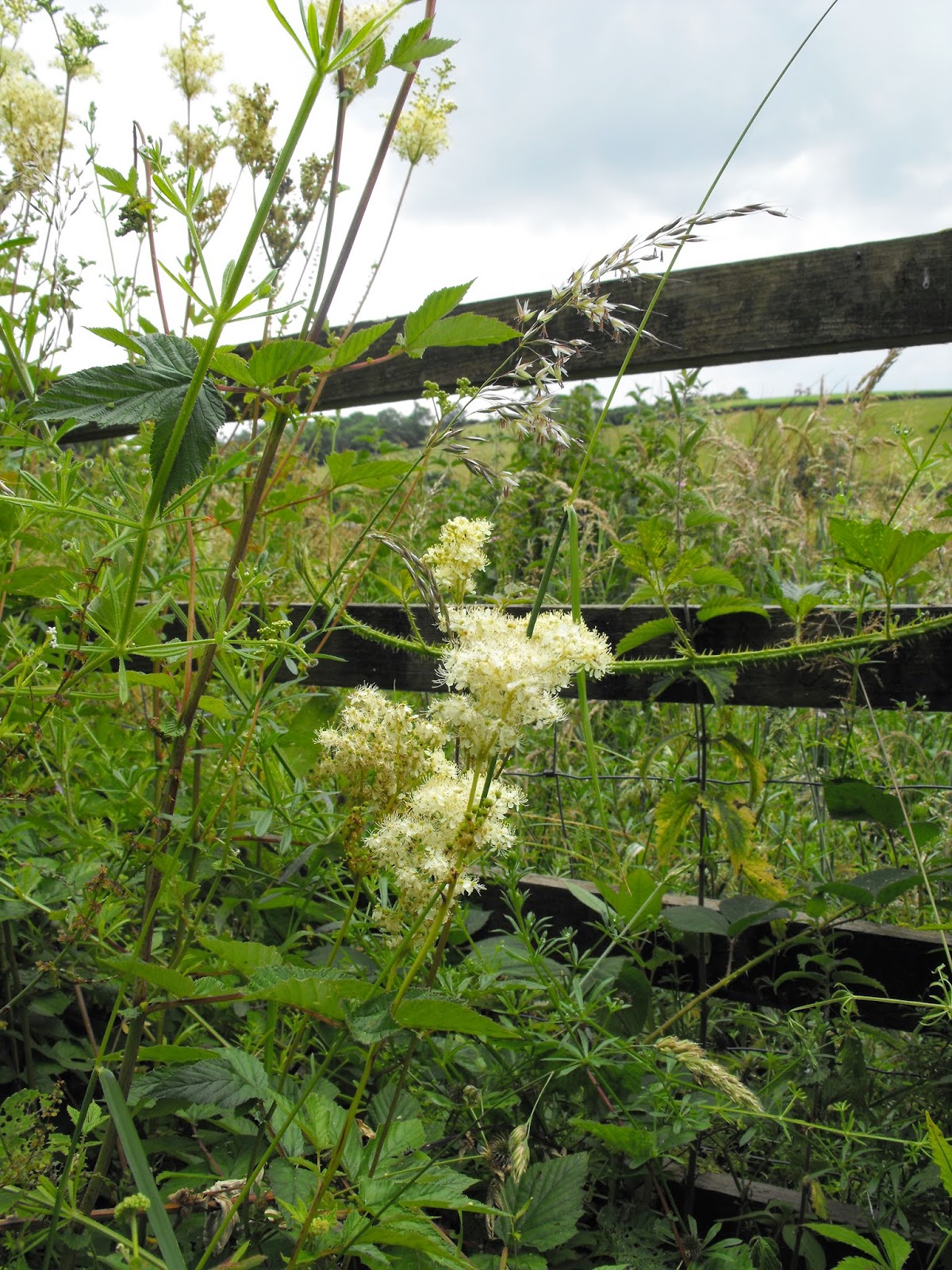 Meadowsweet ("Queen of the Meadow") and a tangle of brambles, nettles and goosegrass grow above the ditch at a field-margin.  The leaves of the Meadowsweet have an almond scent and it was once a strewing herb in Medieval halls.  A Modern Herbal says that it was one of 50 ingredients in a drink known as "Save" and mentioned in Chaucer's Knights Tale and was known as Medwort or Meadwort in the 14th Century, and its flowers used in wine and beer and I have more than a strong suspicion that it was the main constituant of Mead, beloved of the ancient heroes and drunk at Yeavering and other such halls before battle was undertaken (can you imagine the hangovers they must have had?!)  Traces of Meadowsweet pollen have also been found in the Beaker Folk Beakers which accompanied their burials. 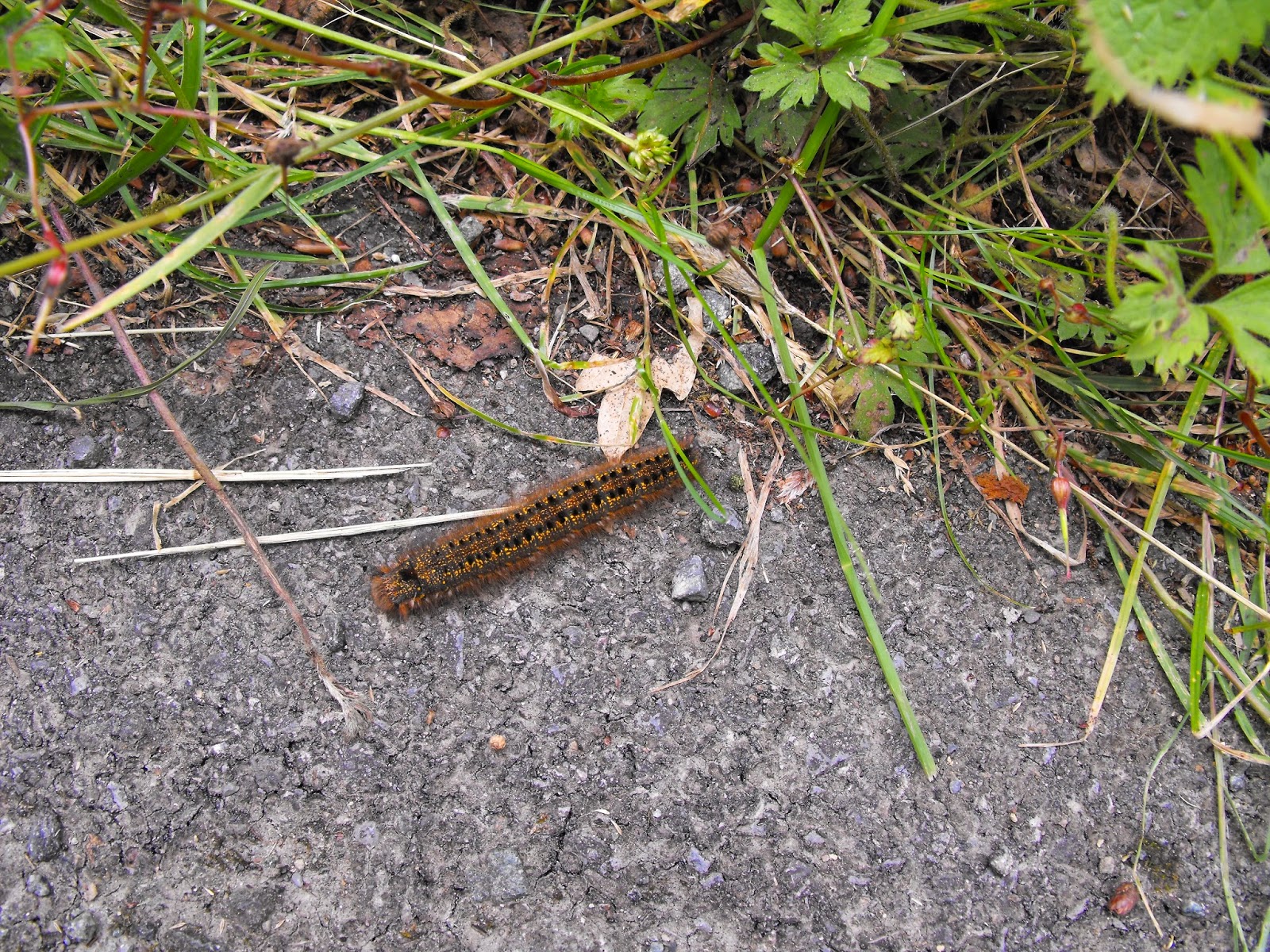 Lastly, a very large caterpillar which was dawdling at the laneside near the river.  I put him back amongst the grass.  Anyone recognize him?
Posted by Bovey Belle at 08:26