A cacophony of cows and other jottings 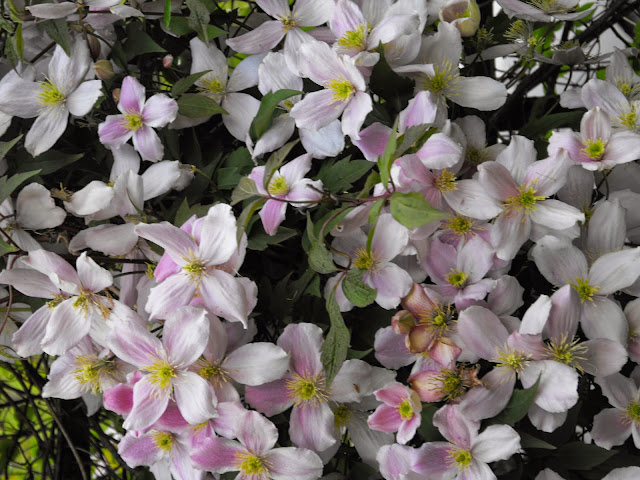 My wonderfully-scented Clematis Montana rubens 'Odorata' which is in full bloom at present and smells rather like vanilla.  Definitely a planting I will have in my next garden. 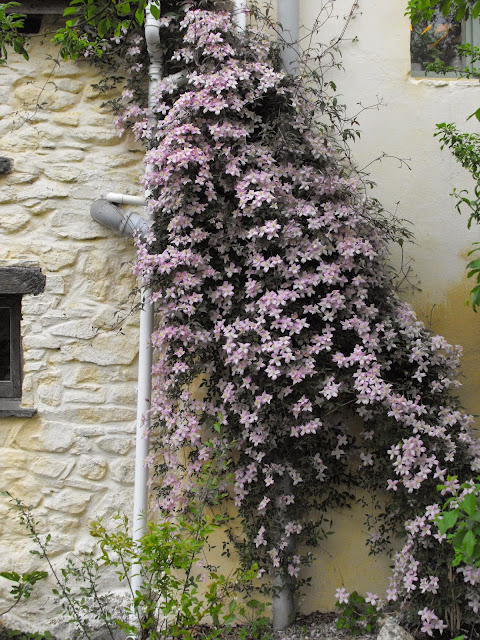 The other Clematis Montana rubens down in the yard.  Both were I think £1 tiny plants from Morrisons, but have grown really well.  I think they've only been planted a couple of years. I managed 5 1/2 hours' gardening on Wednesday I think it was.  This plot at the top of the yard used to have soft fruit in it, but I have taken out the very aged gooseberry bushes (they were 27 years old!) which had got diseased, and I have others in the paddock plot.  I also removed some random raspberries, and three Loganberries which are doing splendidly in large pots. 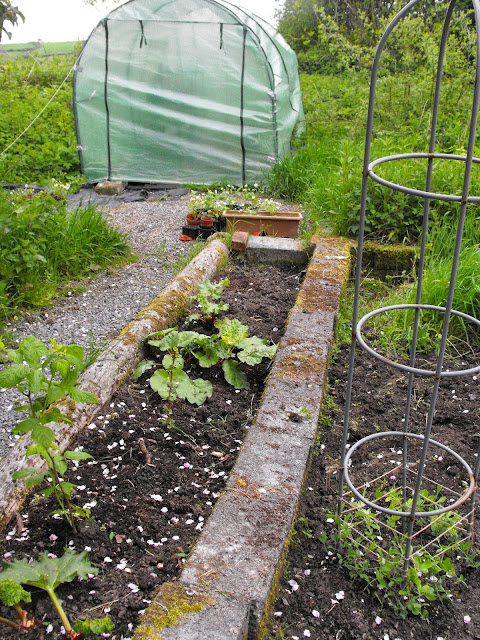 Rhubarb plot finally weeded, and may have the feeble Rhubarb in the distance chucked as it only ever puts out pencil-slim sticks for some reason.  It was a crown I got from a car boot sale.  It's not planted too deeply, so I suspect it needs some more grub, but the one this end was bought in a tub and well grown and more expensive! and gives big stems in same soil.  Flimsy support on right is having a last job growing more sweet peas and then will be dumped as it was cheap and nasty and bent the minute I put it in the ground last year to support a climbing rose. 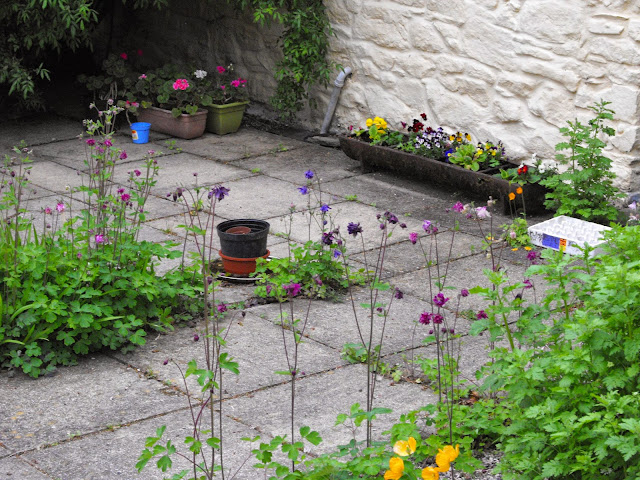 Mum's old patio is tidied up a bit now and the Aquilegias just coming into bloom. 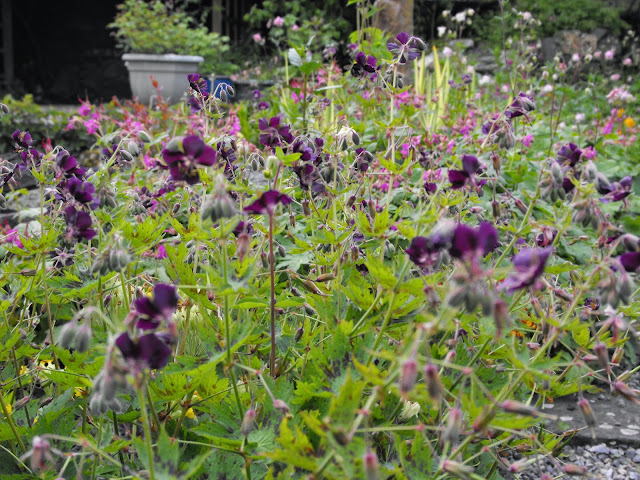 A rather blurry close-up of the Geranium phaeum which I know as Weeping Widow.  It grows EVERYWHERE in my garden, but that said, the bees absolutely love it, and when you dead head it, it will flower all summer long. 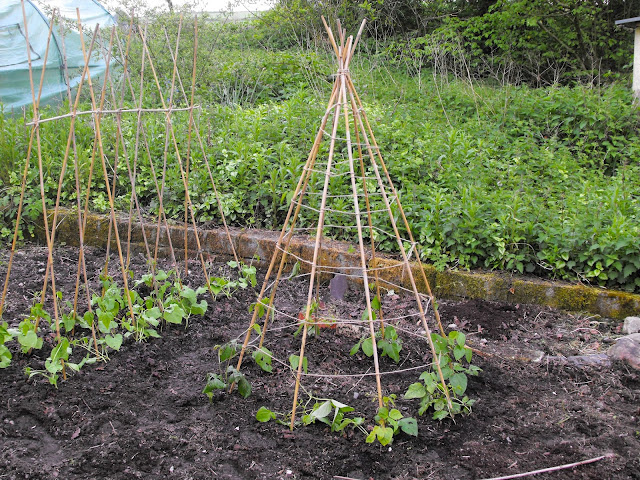 I FINALLY got my beans planted today.  The wigwam is Runner Beans, grown from my saved seed last summer, which didn't provide much in the way of germination, so I have had to buy more seed (Scarlet Emperor) and have those germinated in the polytunnel now, for a 2nd later row.  The ones on the left are Hunter (flat) beans. which all germinated and like the runners, have been romping away in the polytunnel, desperate to get planted in the ground, but I feared a late frost so let them grow on a bit. 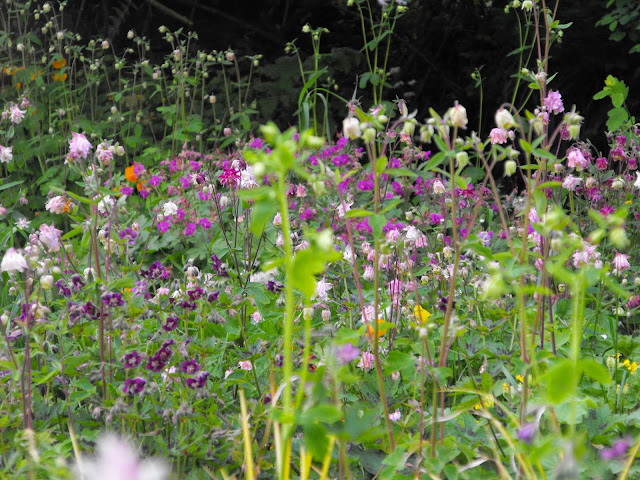 I like my garden to be a mass of flowers in spring, and these Aquilegias certainly fit the bill. 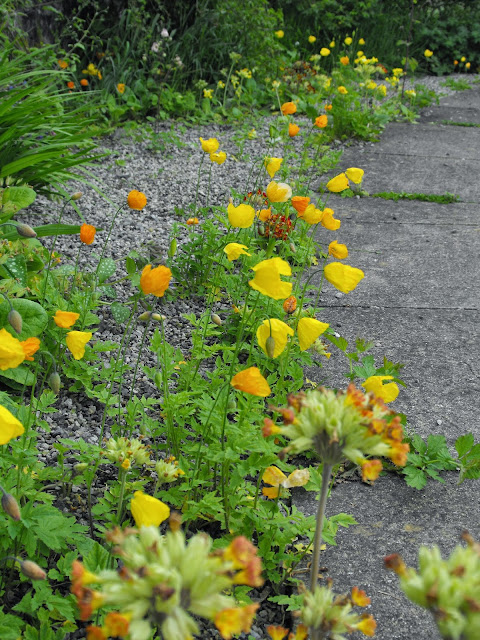 As do the cheerful Welsh Poppies.  I tried growing these from seed for several years, but no joy, so I gave up and didn't try to sow any more.  Next year I had masses from nowhere. . . 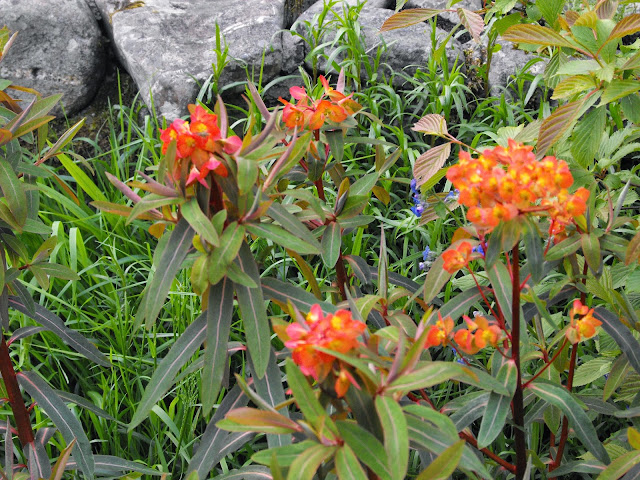 More colour in the main garden, but damned if I can remember what they are called now! 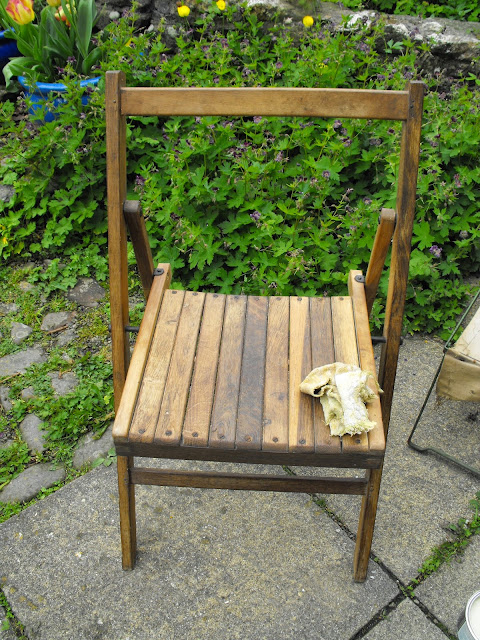 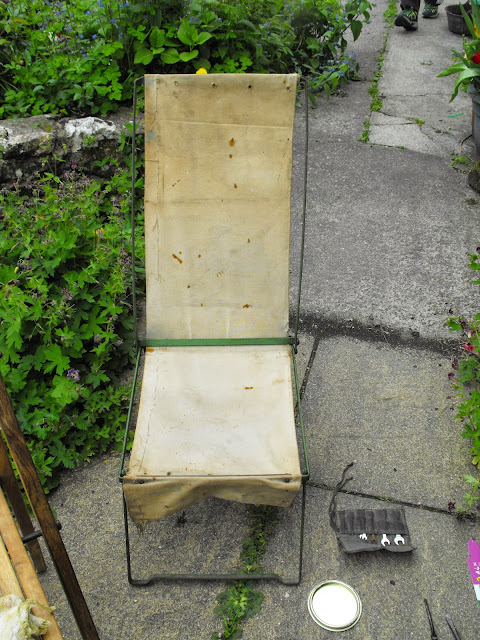 Work in progress: a child's deck chair which has to have the old canvas removed.  I have brought some pretty stripey material to replace it, but as that has pink and cream stripes, I will need to rub down and repaint the chair frame (in white). 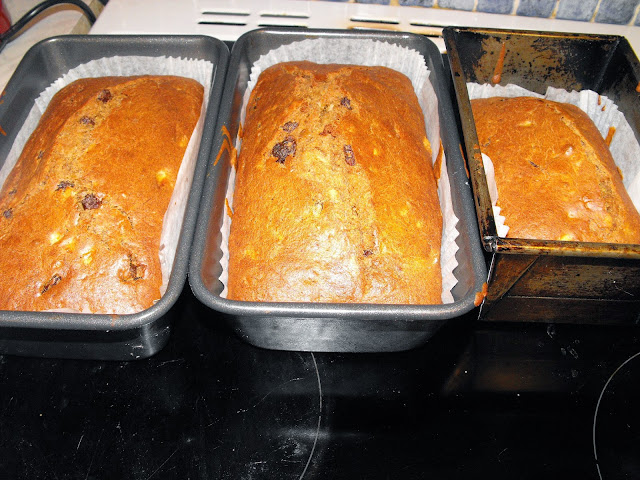 Finally, 3 cakes for friends, all Banana Applesauce cakes. That's a recipe I use regularly.  I will try and find time to include the recipe next week.

Oh, and the cacophony of cows?  The dairy herd went up to there overnight field, but then I heard a huge bellowing and yelling and the entire herd was back out in the lane, complaining bitterly that they wanted a different field tonight!  I think they must have put them back down in the fields towards the river as there was soon no noise after that!
Posted by Bovey Belle at 12:28