More gardening . . . and a Heron in an apple tree. 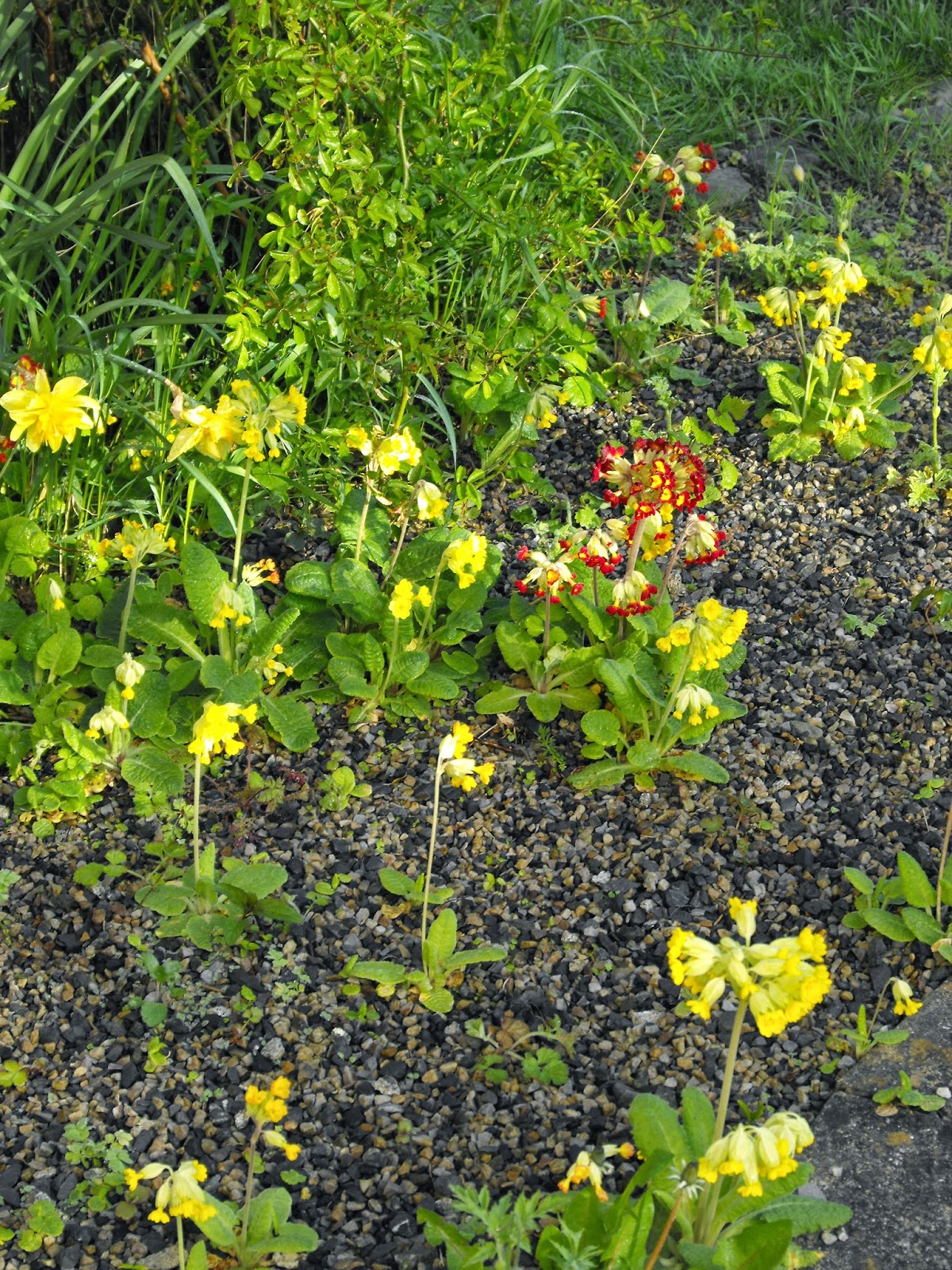 When I looked out of the window one day this week, that is what I saw - a Heron perched, looking very ungainly, in our apple tree by the pond.  As I moved towards the window, he scarpered.  I have attempted to do a rough head count in the pond but the fish are very wary, so perhaps he has been fishing early in the morning.  I should have about 24 fish in there of varying sizes, including 7 or 8 black babies which haven't yet changed colour.  All the frog tadpoles have gone, so I am guessing that they had a virus or something.  However, a fresh lot of jet black tadpoles (Newt I am guessing) has hatched on the other side of the pond, so I am hoping they are immune to the virus. 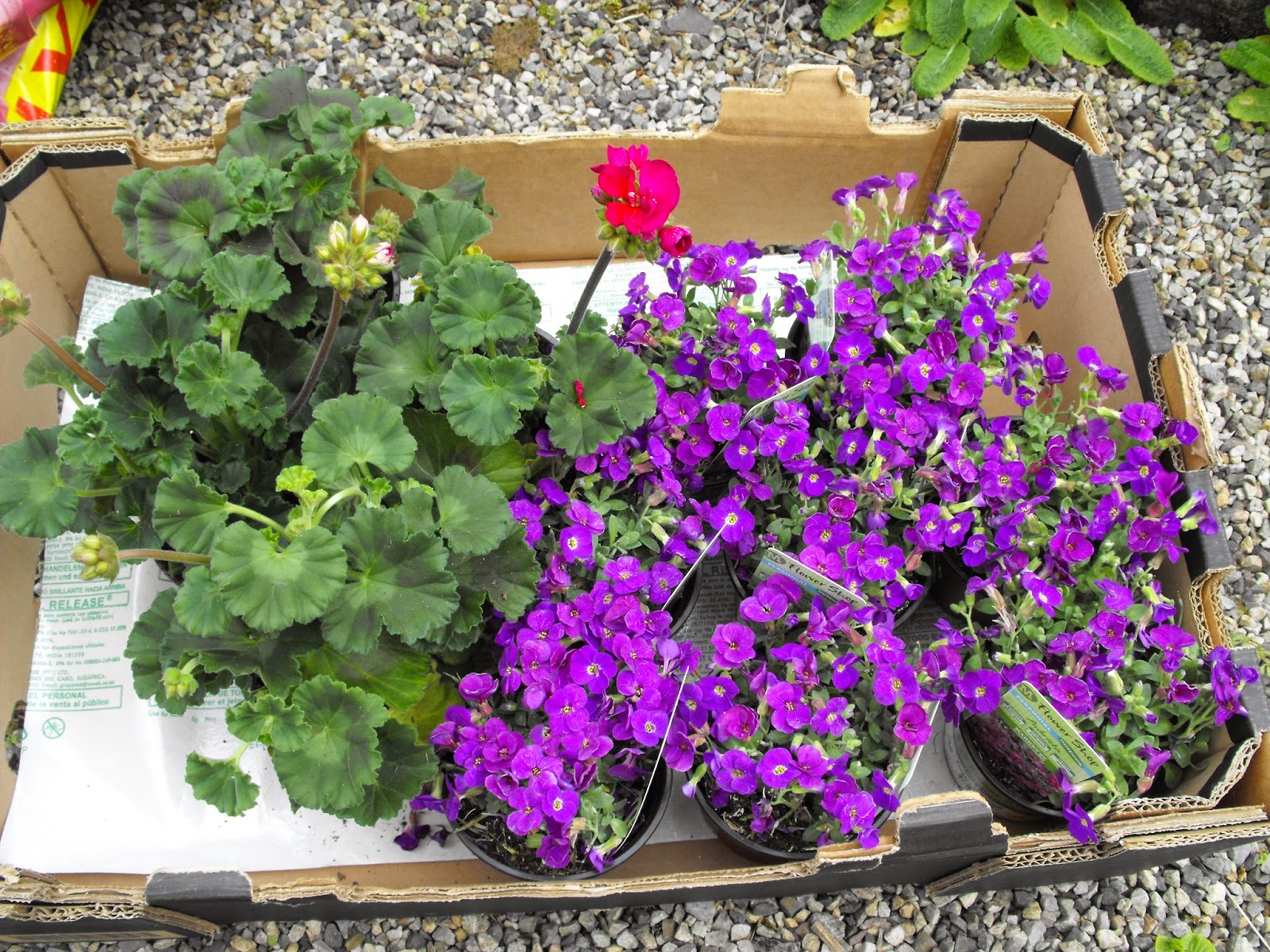 Some plant bargains this week.  The Aubretias are just £1 per pot in Morrisons.  I bought three the other day and another 8 yesterday, and may get some more to totally revamp the top of the wall.  The zonal Pelargoniums are just 75p each in Lidl.  I can't even buy these so cheaply at a car boot sale. 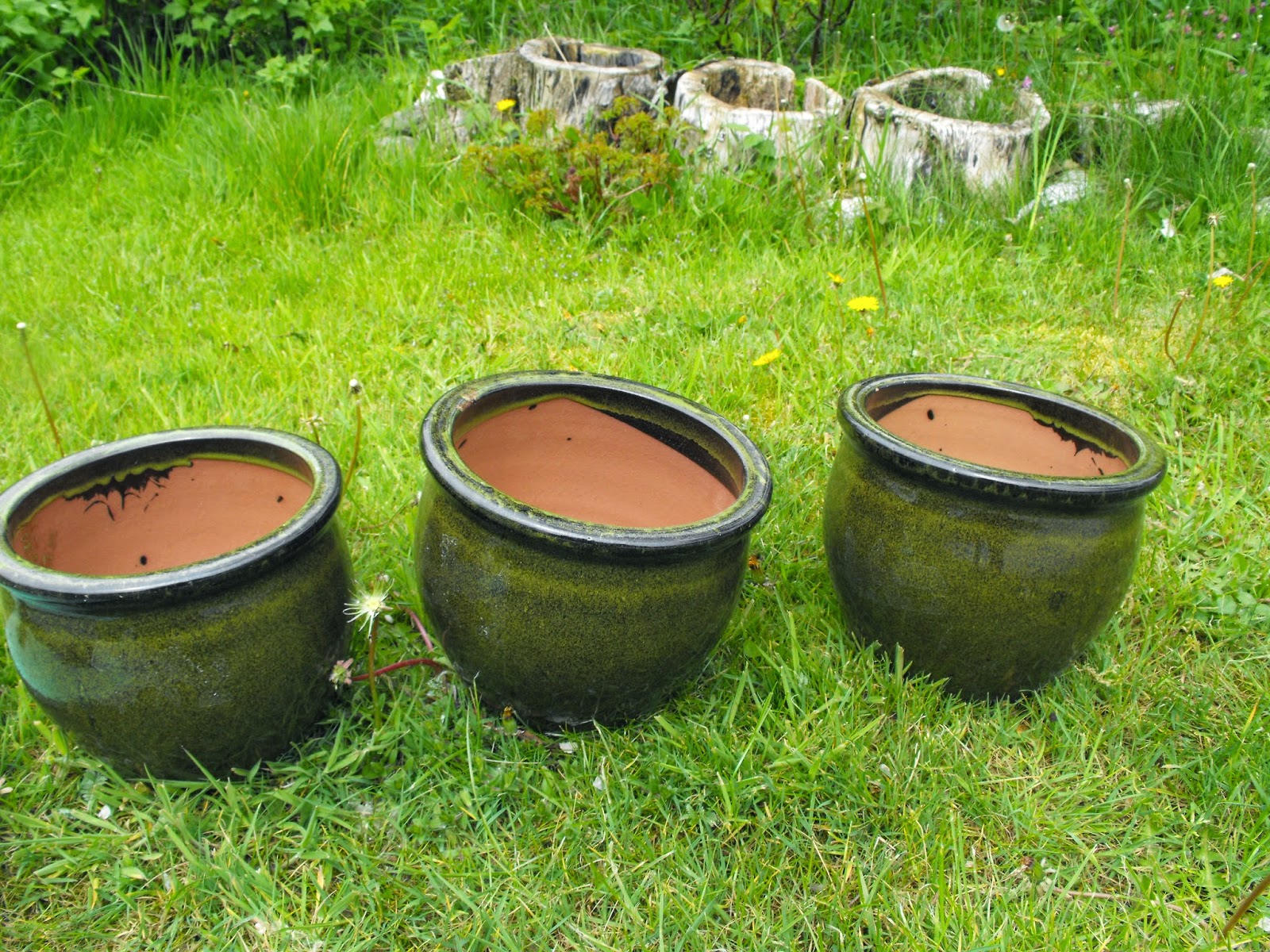 3 lovely new planters from Charlies, reduced to £4.99 each.  I usually go for the deep blue ceramic planters (bigger ones) but this green appealed to me yesterday. 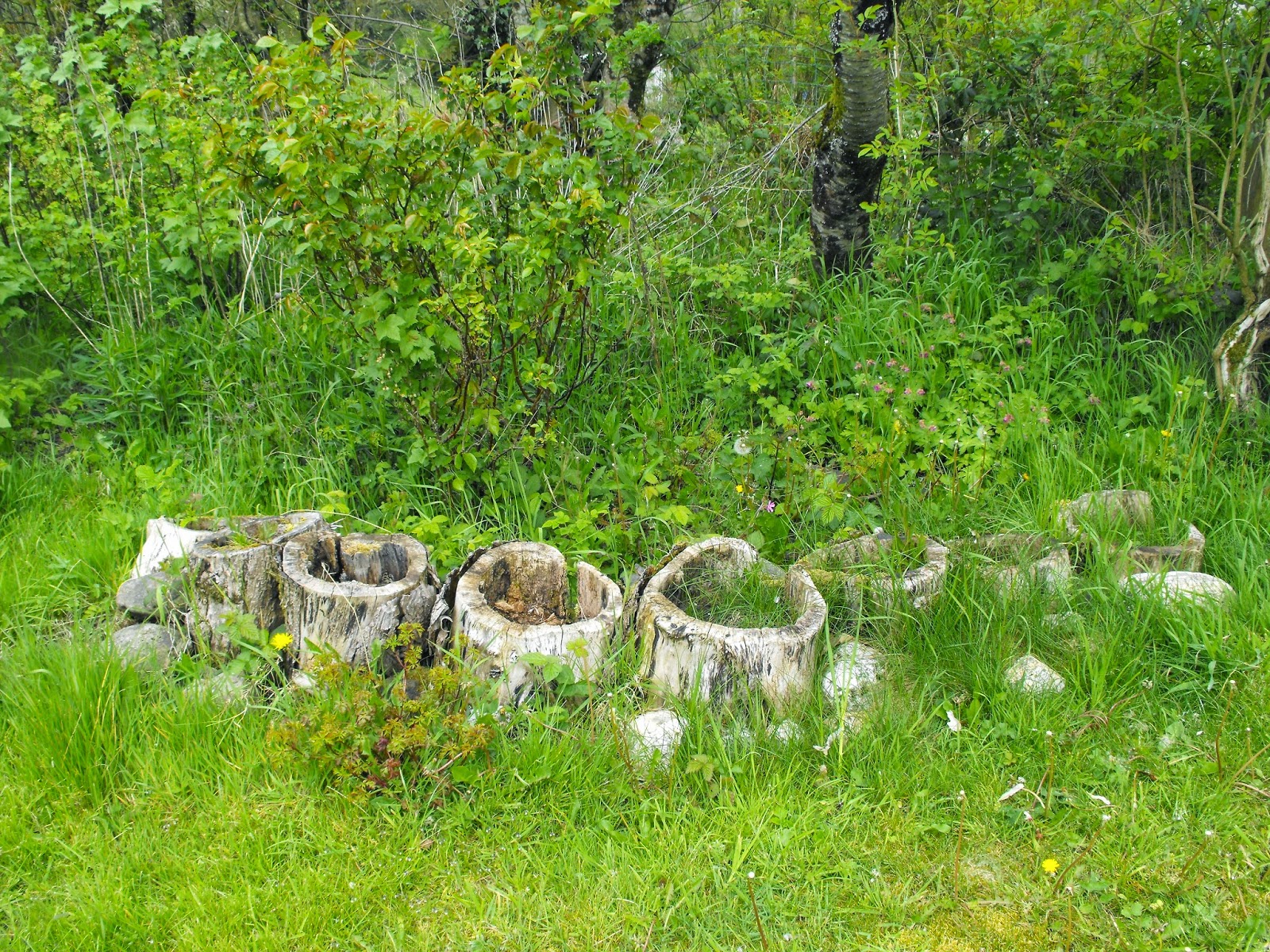 I bought them so I could blitz this area by the gate, which has gotten very overgrown and shabby and is difficult to weed, because I put stones around the tree-trunk planters.  So - it all has to GO. 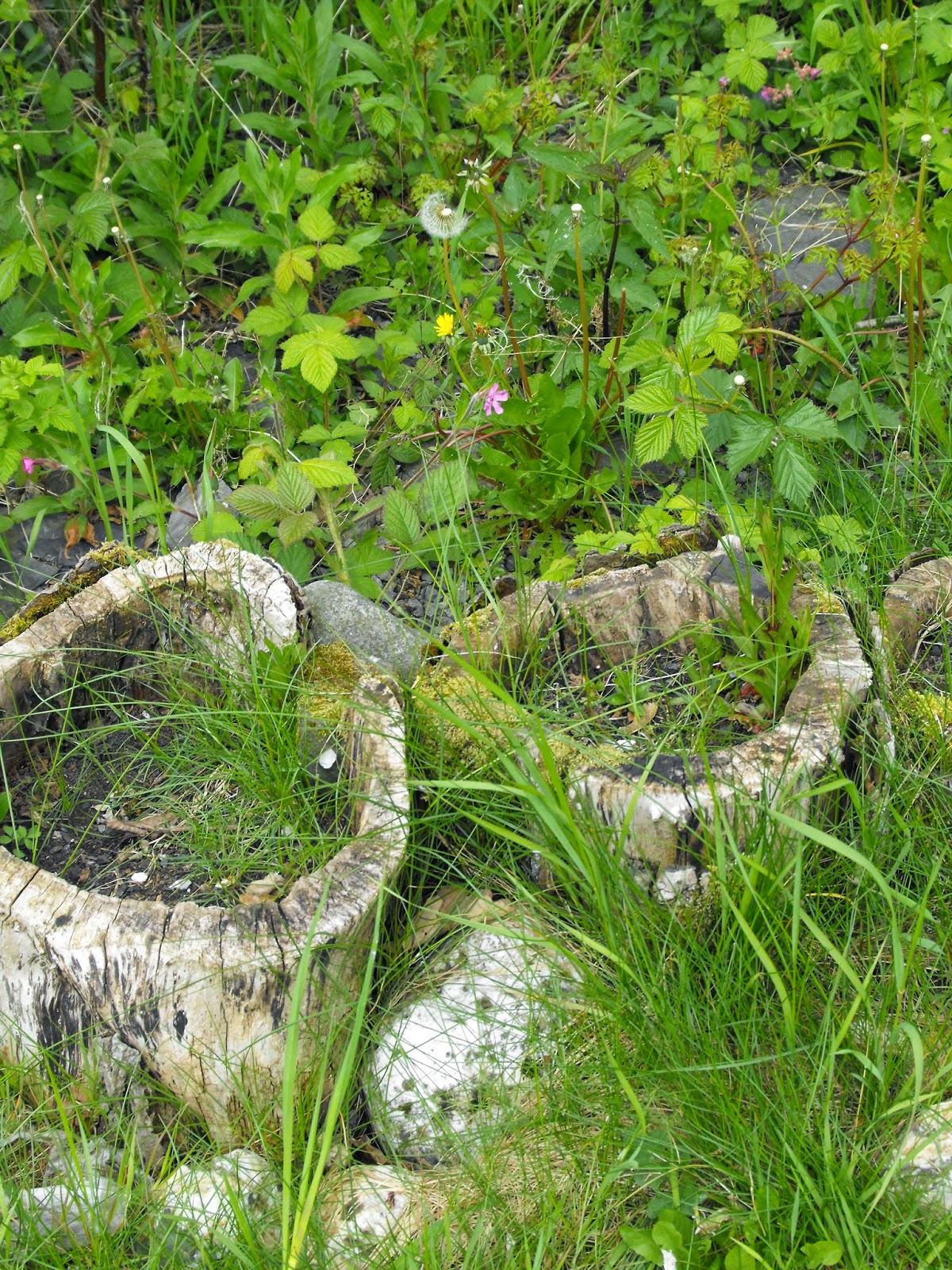 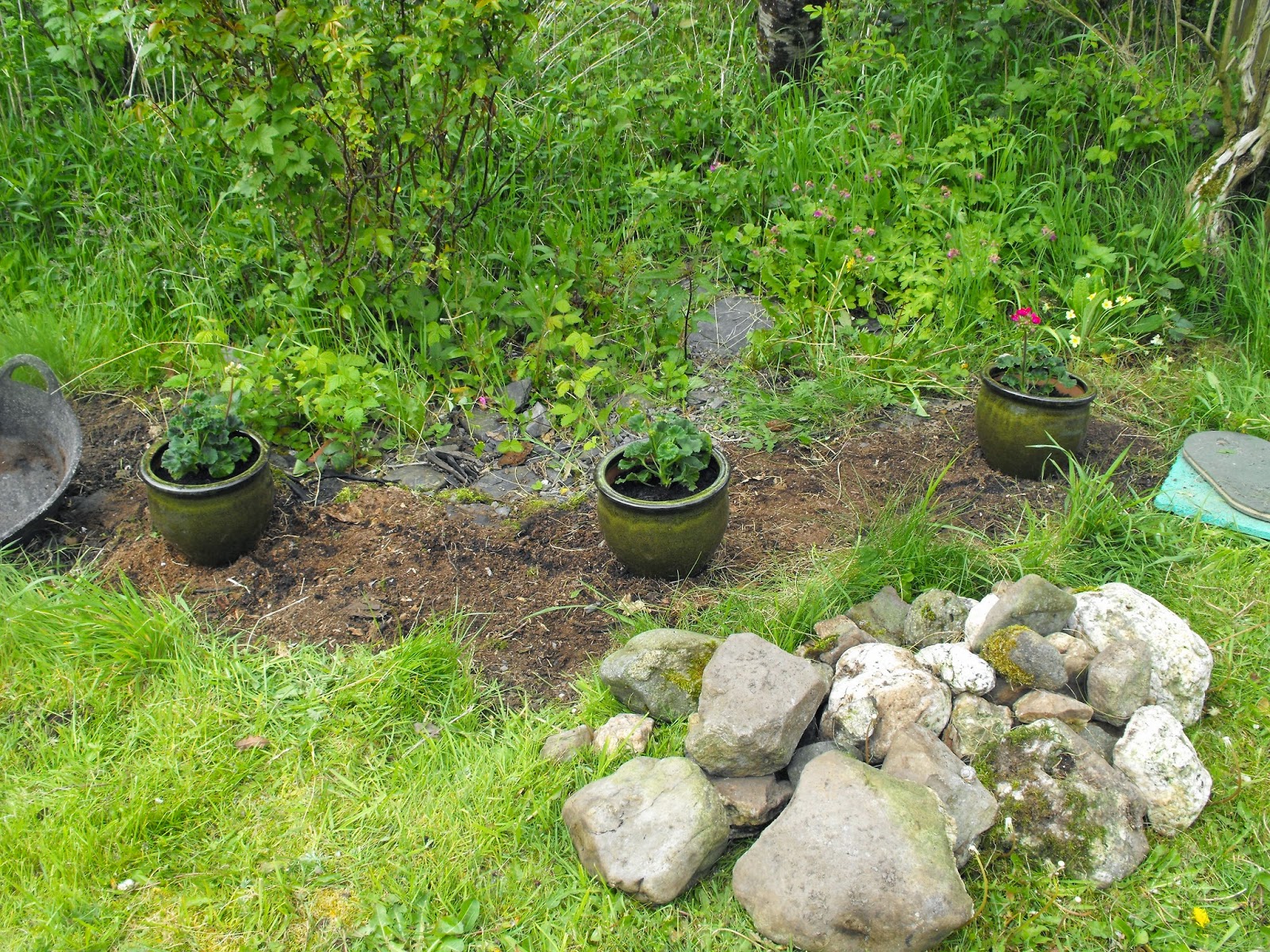 There, a start has been made.  Considering this has membrane under all of it, to stop the weeds, it's amazing how little difference it has made!  I have just plonked the planters there for the moment.  Hopefully it will look a little different when finally finished. 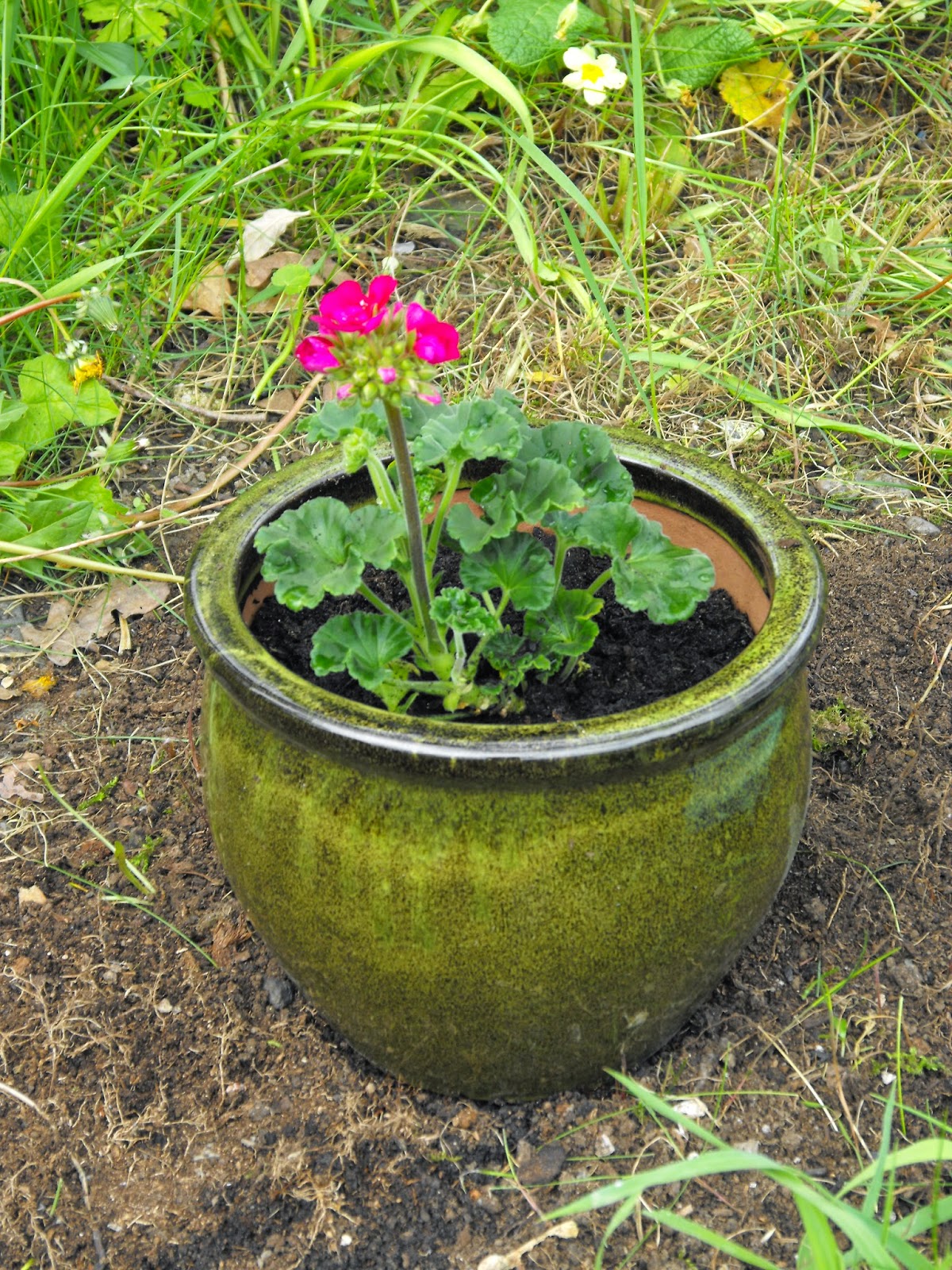 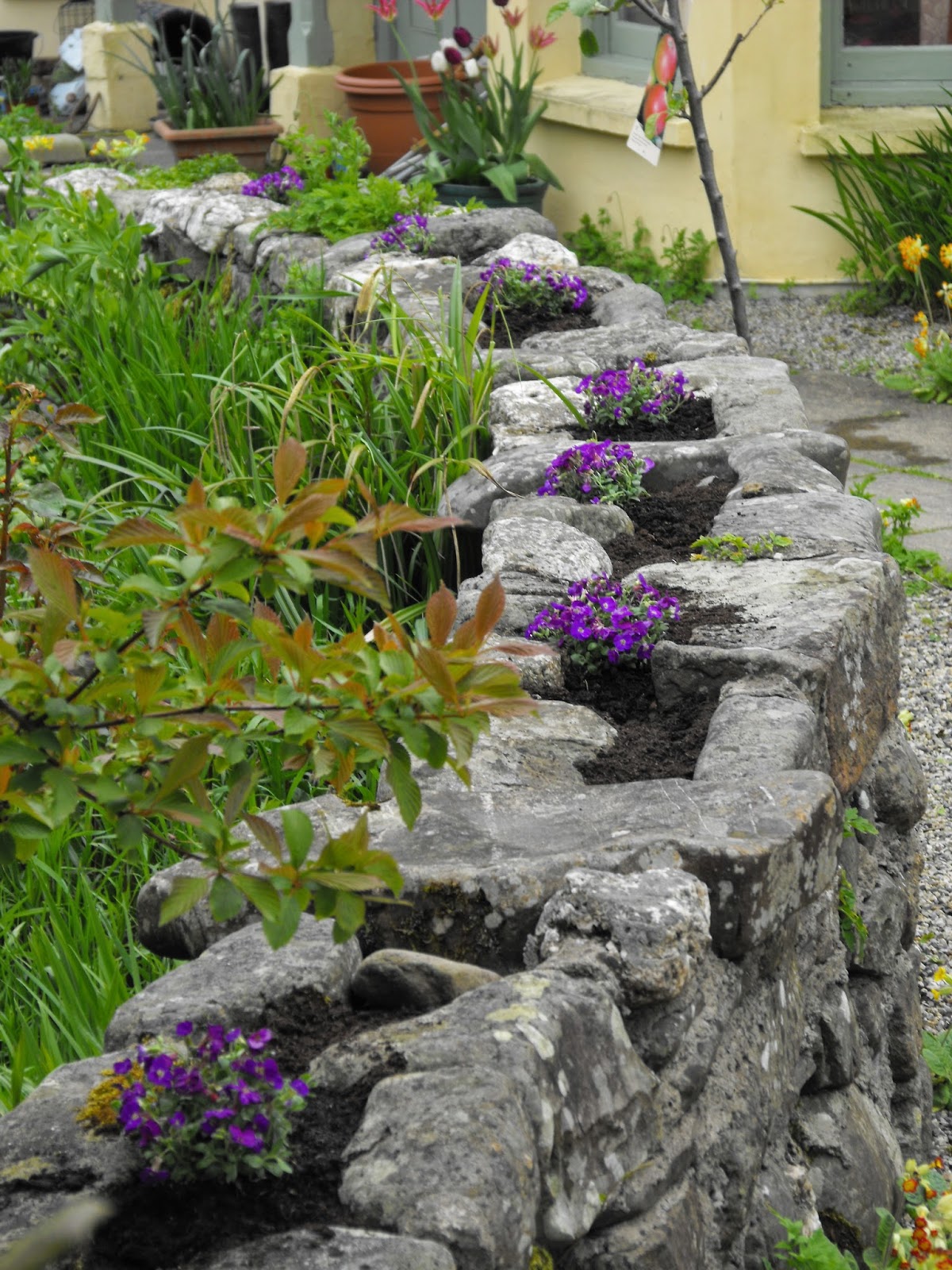 Fresh compost in the wall-top, and Aubretias planted.  I am debating removing the small area of campanula and a.n.other plant whose name escapes me, which have grown in the wall ever since I first planted it.  Then I can have the entire wall looking uniform.  I feel like a murderer even contemplating it though I will try to save them with roots and replant elsewhere . . . 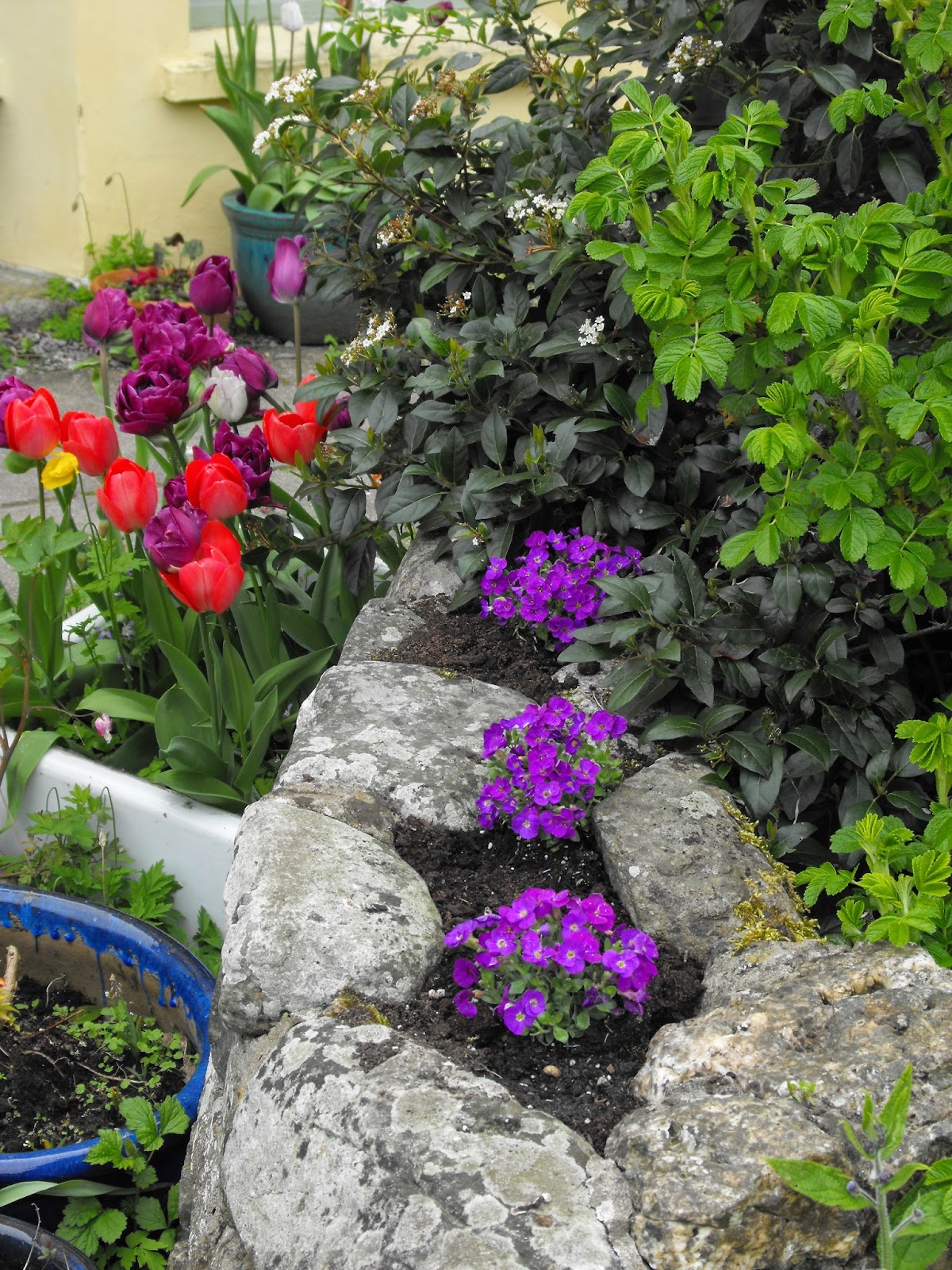 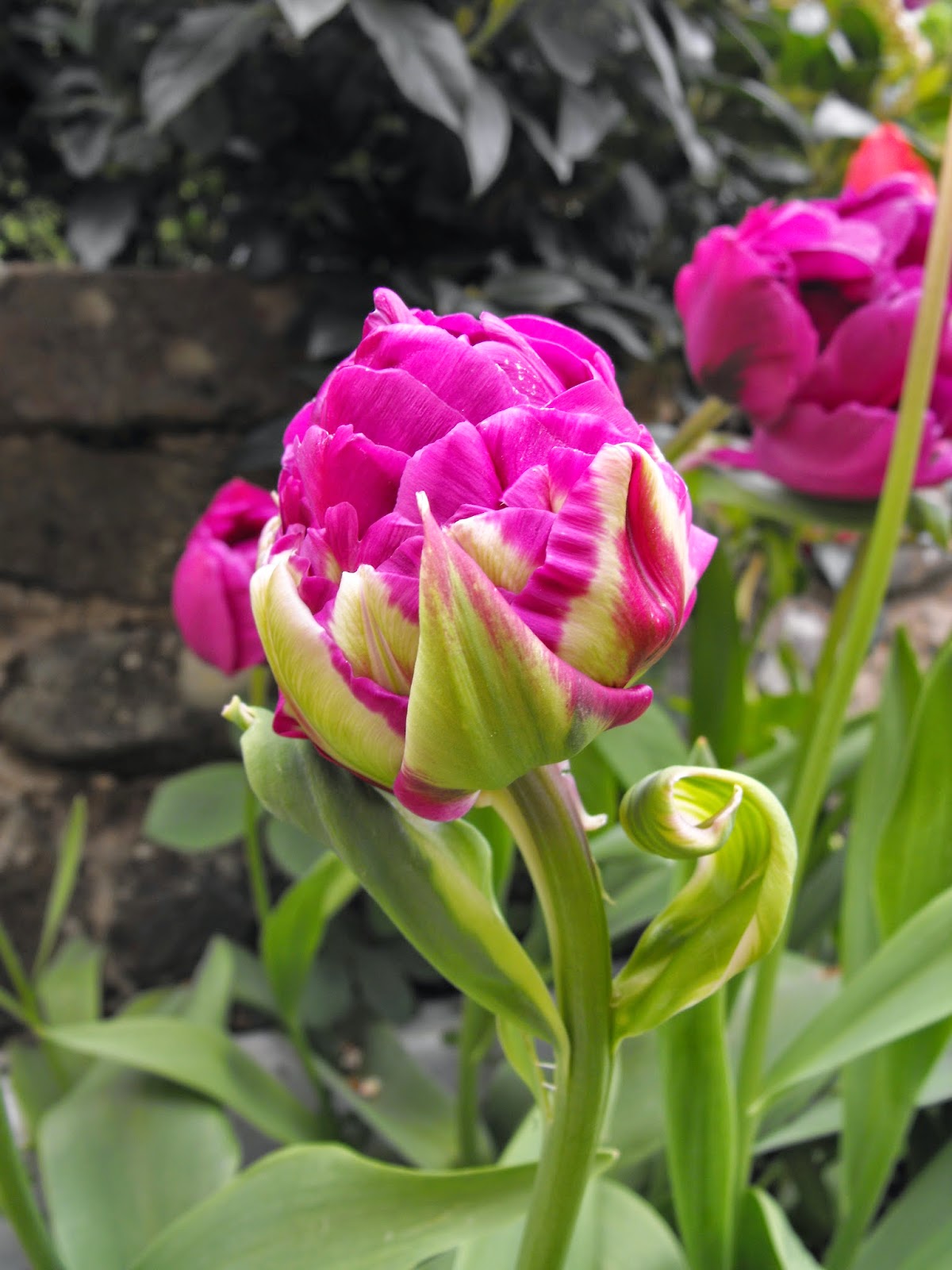 Another unusual and pretty tulip unfolding. 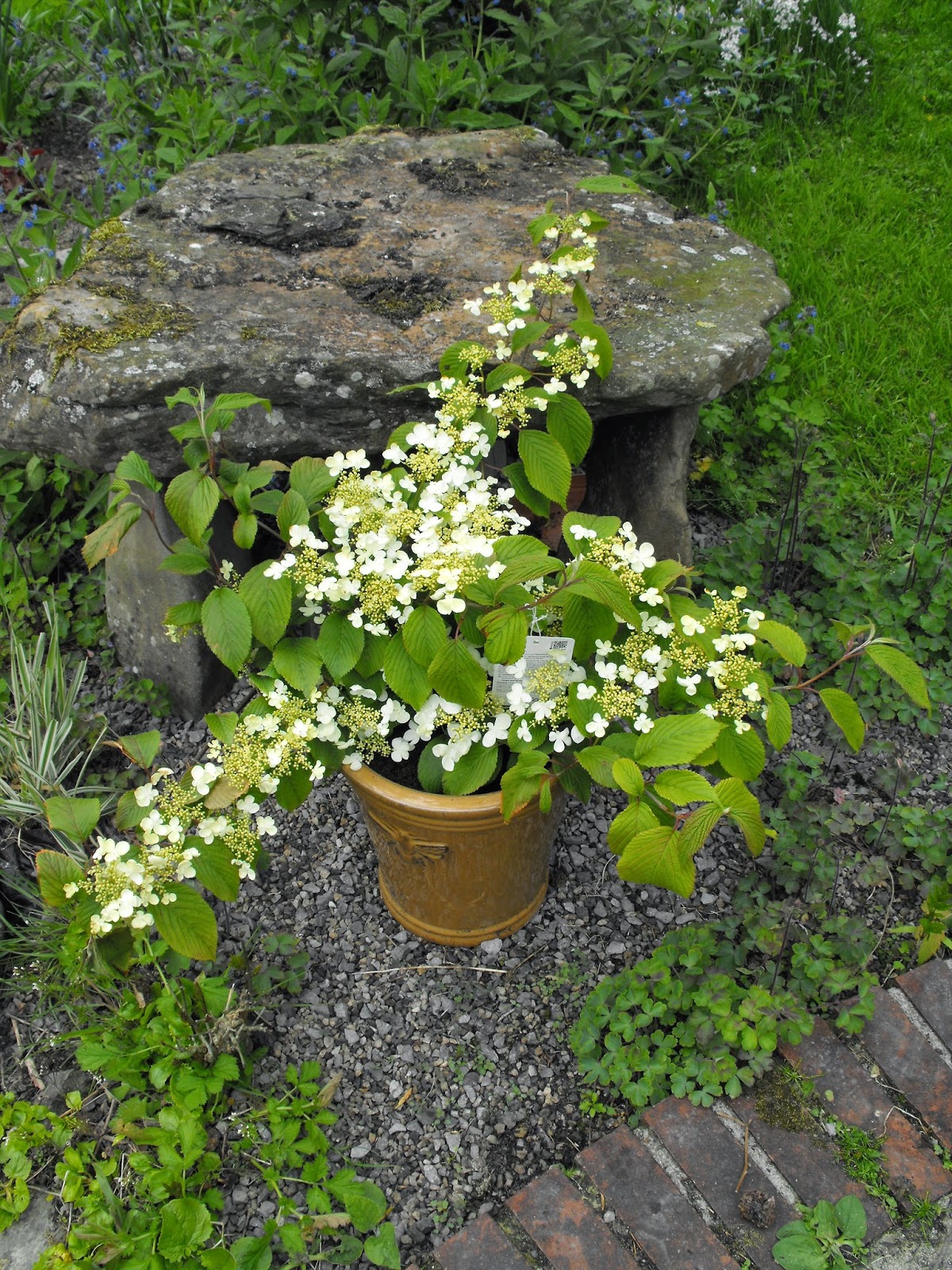 I have potted on my Lace-cap Viburnum, in a lovely planter I had with a Bee on it.  As my late friend Annie was a bee-keeper, this seems very appropriate. 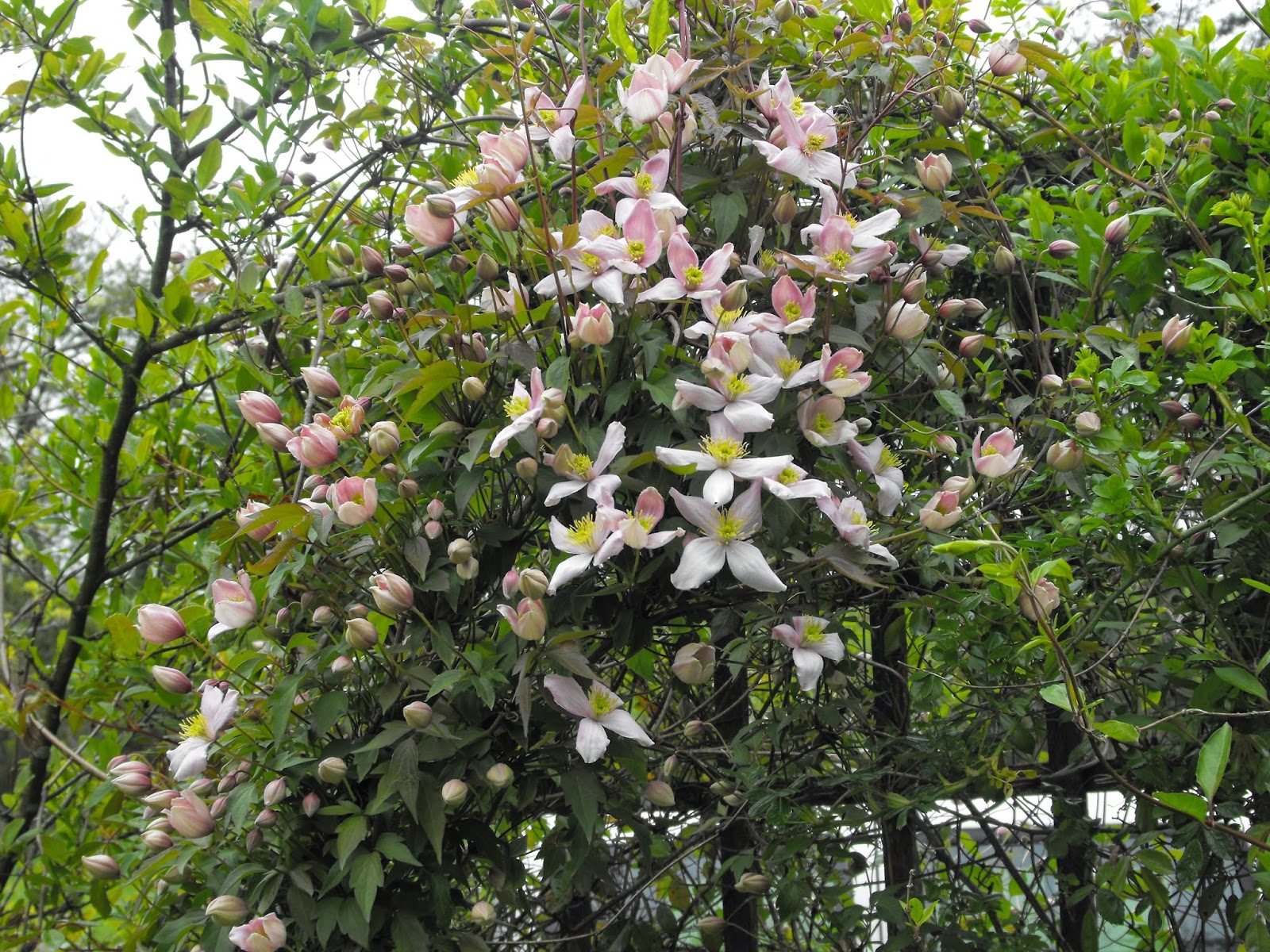 Clematis scrambling through the trellis.  I think it's a Montana but not rubens.  My Cl. Mon. rubens is in the yard (photos later, as it's just unfolding its petals).  I used to have the most AMAZING rubens, which went the width of the garden and had a million flowers each spring. THEN Next Door's unpleasant (I am being polite here) son decided to take the trasher to it - 4 runs each way killed it stone dead.  I don't normally bear a grudge, but I have made an exception in his case. 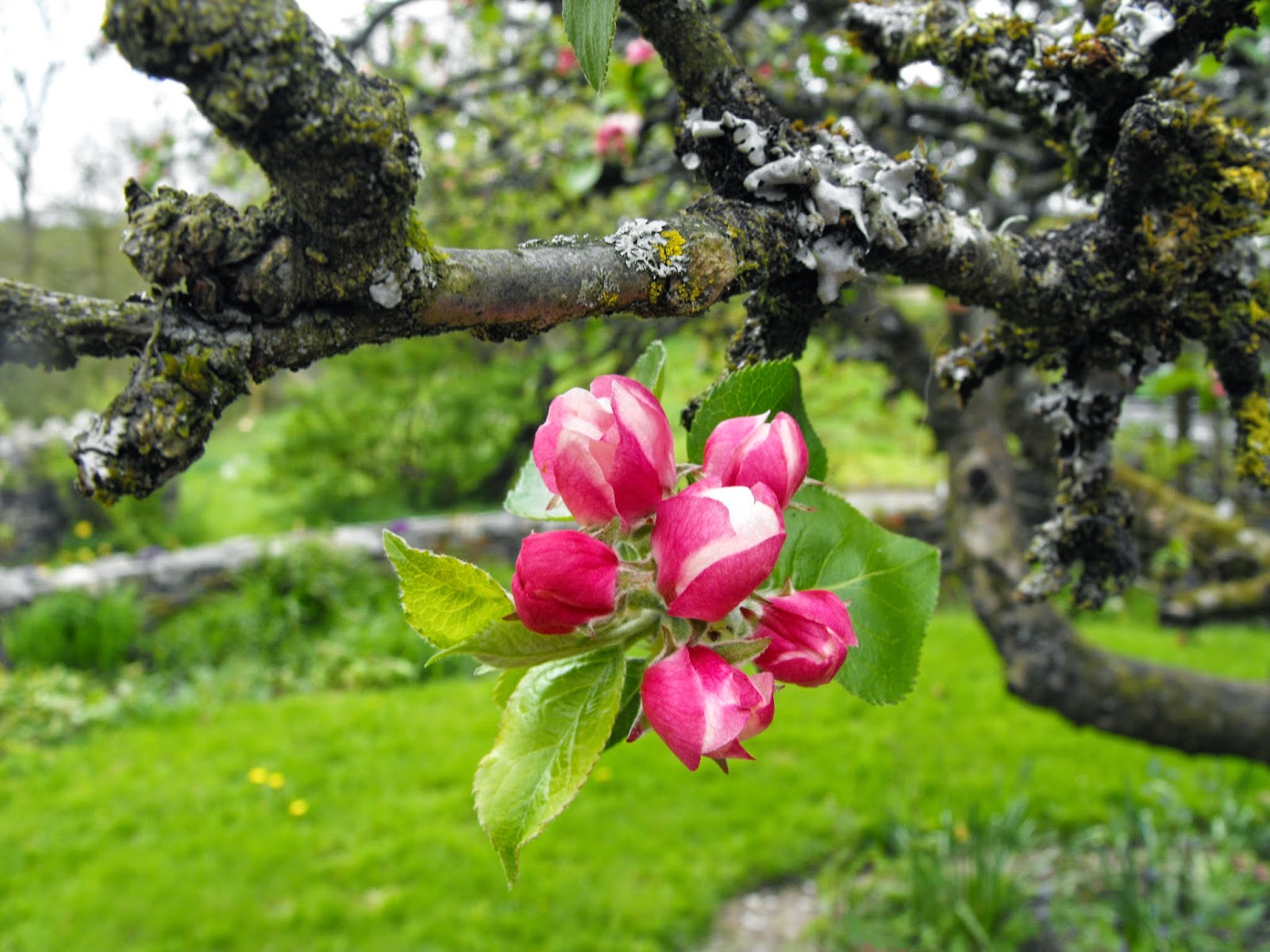 I don't normally care for pink as a colour, but isn't this divine?  This is the Bramley tree.
Posted by Bovey Belle at 23:04